Do we really want to travel in hermetically sealed popemobiles through the rural provinces of France, Mexico and the Far East, eating only in Hard Rock Cafes and McDonalds? Or do we want to eat without fear, tearing into the local stew, the humble taqueria's mystery meat, the sincerely offered gift of a lightly grilled fish head? I know what I want. I want it all. I want to try everything once”― Anthony Bourdain, Kitchen Confidential: Adventures in the Culinary Underbelly

Cultural experiences keep us involved for parts of the next three days, and the first is the one I always dread but come away from so glad I participated—a dinner in the home of a local family.

We are divided into groups of six and taken through the other face of Victoria Falls town, the one most tourists never see or hear about—Chinotimba Township, a high-density area of the working class, except there is high unemployment there.  This is where the people live who wait on the tourists who come to see the Smoke that Thunders.

In the local Nambya language, “chinotimba” is the word for the sound Victoria Falls makes.

The coach takes us into the township at dusk and there are few people on the streets.  The homes range from shacks to very modest.  We pass a tuck shop, a tiny convenience store about the size of an ice fishing shack in Minnesota.

The bus pulls off the street next to a home with a satellite dish on the roof and a patch of corn growing along the side. 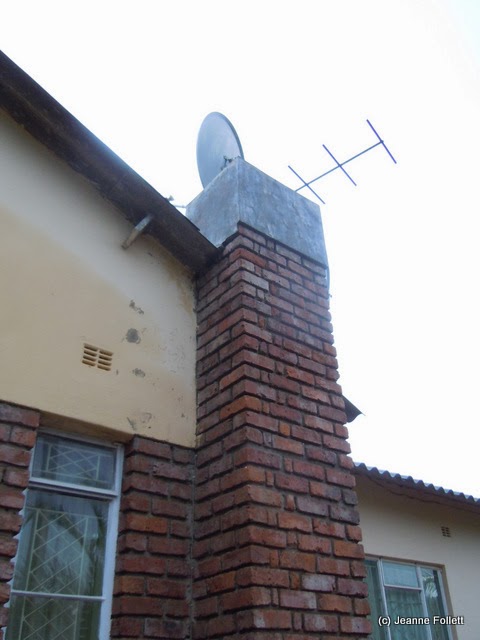 We are welcomed by Tich, his wife Silungile (called Suli), and their son Glynn, whose favorite sports team banner is prominently displayed on the wall.

The home appears spacious by African standards, a large kitchen, a comfortable living room, dining room, and bedrooms in the rear.   We seat ourselves around a dining table and Glynn escapes to his room.  There are heavy drapes on the windows, as well as grill work.  Tich explains the grill work is to keep out the baboons, though it won’t stop the elephants that occasionally come through the neighborhood and wreak havoc. 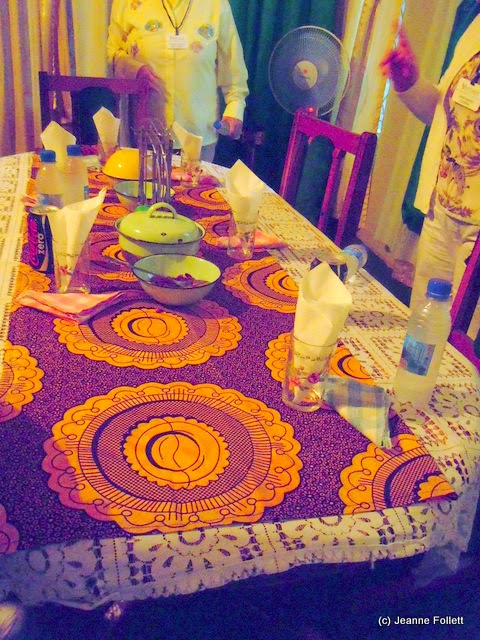 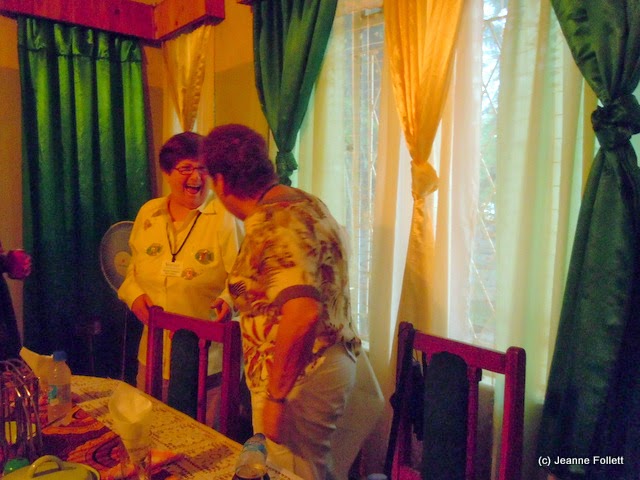 Tich and Suli come around with a pitcher of water, which they pour over our hands as we hold them above a pan.  As Tich serves each dish, he tells us about it—kale with garlic, kale and peanuts, and the essential pap (like grits or polenta), which is eaten at every meal.

Then come chicken and beef, each in a tasty spicy gravy, and carrots and green beans.  There is a bowl of peanuts on the table.  Brian had previously told us all the food was prepared in a central location and delivered to the homes, so all four groups will have the same dinner. 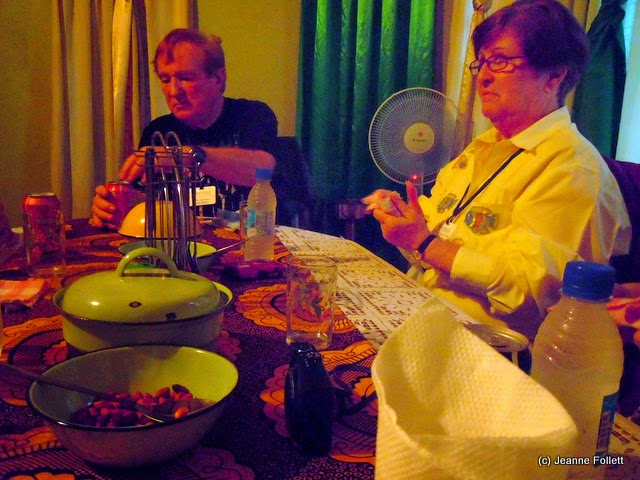 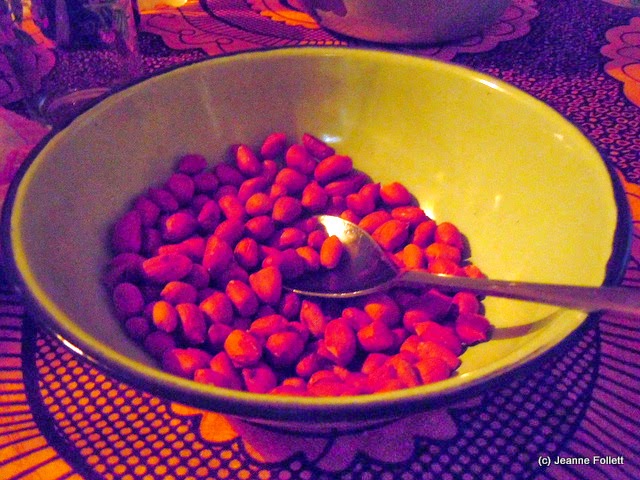 As is the custom, we eat with our hands.   The dinner is substantial.  Tich says usually they have only kale and pap.   They eat meat occasionally. 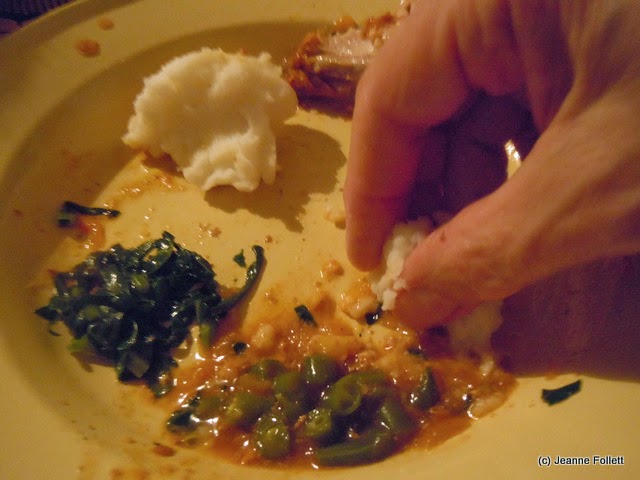 Tich has saved the best for last—dried fishes about an inch long, which are crunchy and salty and fishy, and dried Mopane worms, considered a delicacy by some and an important source of protein by others.

The worms are the larvae (caterpillar) stage of the emperor moth and are prepared in various ways, such as sautéed with onion and tomato or, in the case of the one I tried, gutted and dried.  It was crunchy with lots of little crunchy bits I suspected were caterpillar legs.   The taste was not unpleasant.  (Hours later, I was still trying to swallow those little legs.)   Brian says he used to eat them as bar snacks.

This is a comfortable home of several rooms, though dimly-lighted.   The dining room light is a very low lumen CFL screwed into a bare wall socket; the one in the kitchen even less, making photography difficult.

Tich tells an entertaining story about traditional African courtship—how he met and ignored Suli when they were teens, then visited Suli’s father to ask for her in marriage, paying the requisite cow in return because he was taking a worker from the father’s family, though it took him six years to earn the cow.  The payment is called lobola.

Suli smiles a shy, endearing smile and nods throughout the story.  English is the official language of Zimbabwe.  Suli’s accent is very thick, but Tich is easy to understand.

They have been married 27 years and have two older children in college.   When asked, Tich says they made their living by selling used clothing.  Obviously, they supplement that income by hosting tourists for dinner in their home and they are very fine dinner companions.

We hug them goodbye and board the bus for our ride back to the sumptuous Victoria Falls Hotel, so close to Chinotimba, yet so far away for those who live there.