I'm sure you've all heard about the far north's long daylight hours.   Those of us who live here think it's normal; tourists have trouble sleeping.   It does tend to mess with one's circadian rhythm.

But, back to normal.  Coming back from cleaning up litter late late night, I noticed all the lakes along the way were dead calm.   So was Tern Lake.


I loaded the kayak in the back of the truck, grabbed my PFD, and drove back to the lake.


I used all the zoom capability my camera had to capture the loon family and ascertain they have two chicks.   In response, the camera over-compensated the exposure, making this photo much lighter than real light. 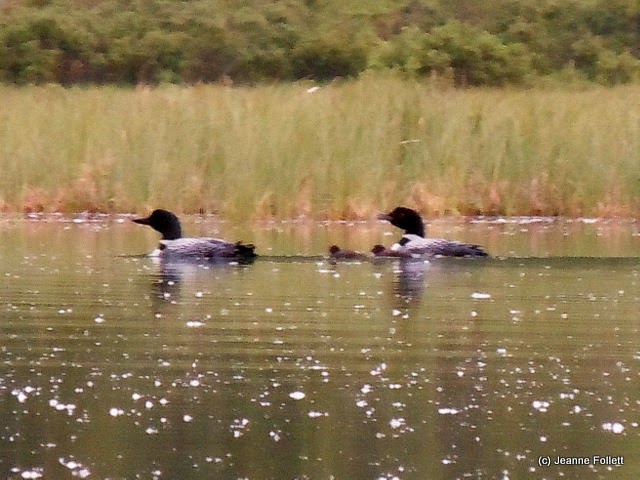 I checked out one of the three beaver lodges in the lake and saw no sign of activity.   I think trappers have taken all the beavers because I haven't seen any signs of beavers for three summers now.   Darned shame.   Used to love watching them.   The trappers left no beavers to procreate here. 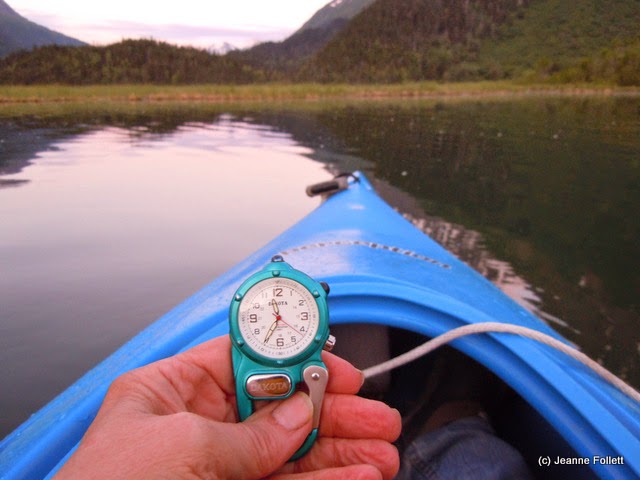 What's that, you ask?

Once upon a time, until 1983, Alaska had five time zones.   I distinctly recall  the East Coast being six hours ahead of us in Anchorage.

Here's a quote from the Alaska State Library:

This change adopted the two current time zones: Alaska Time for the bulk of the state, and Hawaii/Aleutian Time for the Aleutian Island chain.

Another interesting historical note on this changeover can be found in the archives of the Alaska Science Forum for March 25, 1983, which notes that there were at one time five time zones in use in the state (including Pacific time in some areas of Southeast Alaska)...

All that bold face type is the quote.

Did you catch that "unify residents"?    The main driver for cutting Alaska down to two time zones--Alaska Standard Time (and Alaska Daylight Time) and Hawaii-Aleutian Time (Hawaii does not go on Daylight saving time) was political.    Never mind that Alaska is as wide as the Lower 48 contiguous states that span four time zones, we were reduced to two zones.

Where I live, which was Alaska Time (the slice that included Anchorage, Fairbanks, etc.), we were moved an hour ahead.   Daylight saving time moved us another hour ahead.

It did make conducting business easier, both with Washington DC and Juneau, the state capital.  And therein lies the "unite residents" charade.   Underneath all the other stuff about how much better it would be to have Alaska closer in time to the rest of the US were the bitterly-fought battles to move the capital from Juneau closer to the main population center--Anchorage or one of its suburbs.

Wags claimed we could keep a better  eye on our legislators, maybe keep some of them out of jail.   No, probably not.  It would just make it easier to hide their nefarious shenanigans in a larger city.


Daylight saving time knocks us an hour ahead.   So here we are,  two hours off our geological time zone.   High noon is at 2 PM and midnight arrives at 2 AM.   I would not have gone kayaking at 2 AM because it was fairly dark.   Not totally, though.   Kayaking would have been possible.

Four AM ADT was another matter.  It was daylight!