Mongolia, A Report from the Field: The Nomad Herders and "Those Ones"


Those guys killed fifteen sheep and a horse last night, says one of the nomad herders sitting on the floor of a warm and comfortable ger.   He is drinking tea and eating aaruul, dried curdled milk curds.

I’m quite certain there are only two people in that ger who don’t know what those guys means.  One of them is me.  I don’t understand because I don’t speak Mongolian.   The other is a little girl who probably isn’t paying attention to her father and uncle because she is fixated on the gray-haired, blue-eyed, white-skinned apparition that has appeared in her home.

The others know—the two brothers (one of whom is the speaker), the woman of the house, my guide Yusef and driver Chimdee.   In other countries, in other cultures, that one and those guys are wolves.  In this culture, the Mongolian name for wolf is not spoken for fear of summoning the predator.   This is a Shamanistic culture wherein spirits are powerful and respected and treated with caution. 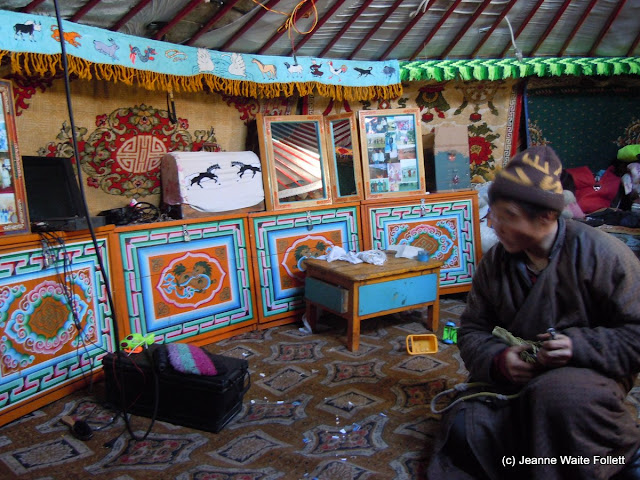 The two men are seated on colorful carpets spread on the ground near a small stove that is centered in the round ger, its stovepipe exiting through the center of the roof.  Today it holds burning wood, but dried dung is also used.   There is a plentiful supply of wood in the larch forest surrounding their home, and an even more plentiful and ever-replenishing supply of dung drying on the ground in the grazing lands that seem to extend forever in this northern part of Mongolia.

The tea is salted yak milk tea, rich and delicious.  The salt cannot be tasted but seems to add some body to the beverage.  The dried milk curds resemble the cakes of Salvo detergent sold decades ago, along with smaller pieces and scraps.   When I am offered the basket, I select the tiniest, thinnest piece I can find.   I immediately compare it (to myself) to what I think chewing on sheet rock would be like—hard and gritty, and way too hard for my teeth.

Yusef says they dunk the dried curd into their tea to soften it, or suck on it.  Packed with vitamins, aaruul has a somewhat sweet and somewhat sour taste.    It makes an excellent trail snack.

The men are preparing to hunt those ones.  The wolves know the men will not take the carcasses for food and thus the predators have plenty to eat for the foreseeable future.  Already, large black vultures are lofting their way north along the mountain peaks and crags, presumably towards the dead animals.

Outside, where the horses are penned in a log khoroo (corral), a single horse is tied up.  It shies from me to the extent of its tether, this foreign creature dressed in foreign clothing.  The herders are wearing the traditional clothing of Mongolians—a warm woolen robe called a deel, bound at the waist with a sash, that extends to mid-shin, and leather boots that reach beyond the bottom of the deel. 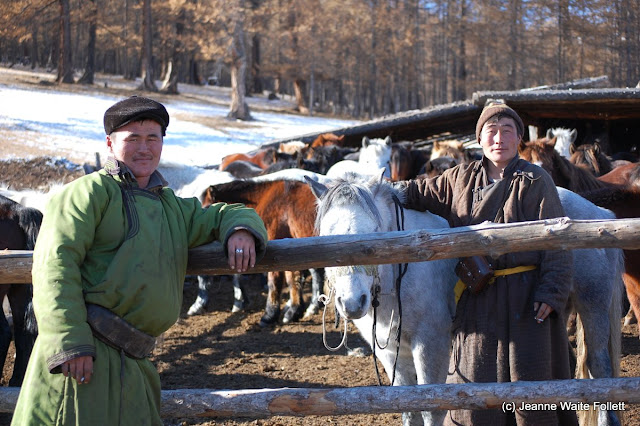 Yusef offers them a cigarette from his pack and the nomads enjoy the commercially rolled tobacco.   Usually, they roll their own.   Lhagvadorj selects a white horse for his brother from the herd.   Once it is secured to the corral rail, all the horses are let loose. 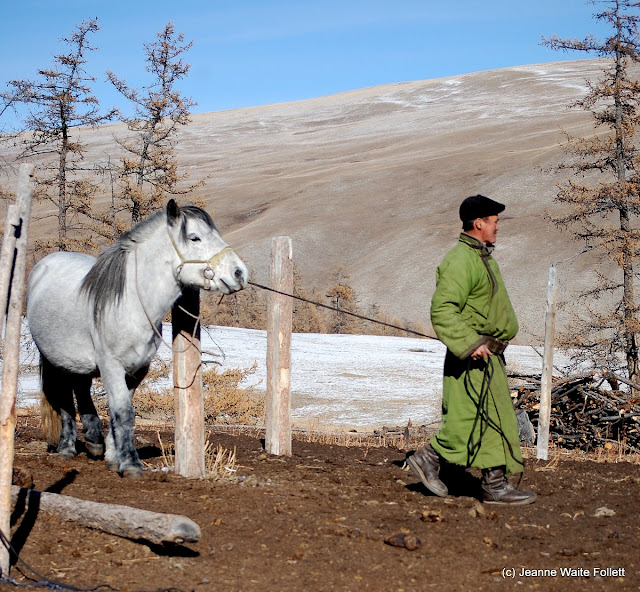 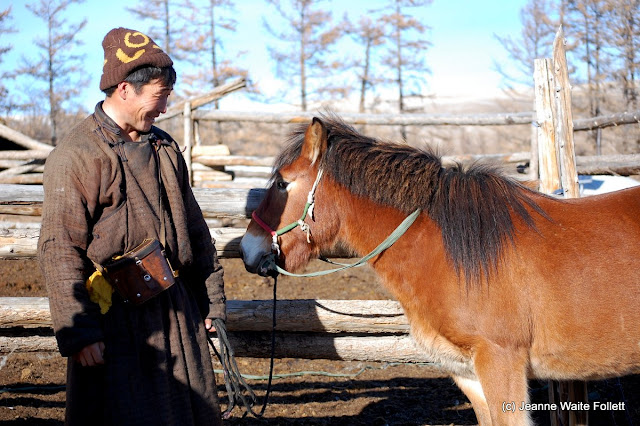 The loosed horses head immediately to my right, down a small swale and into the forest of Siberian larch where the snow cover is less.  In the sunlight streaming through the almost bare trees, the horses are like ghosts as they disappear into the Siberian larch forest. 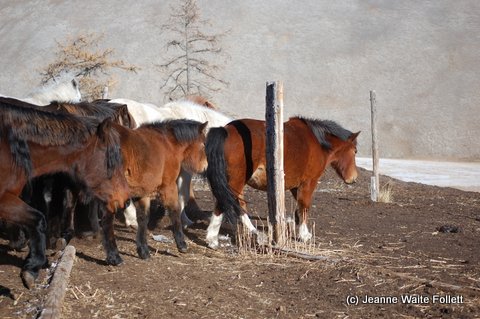 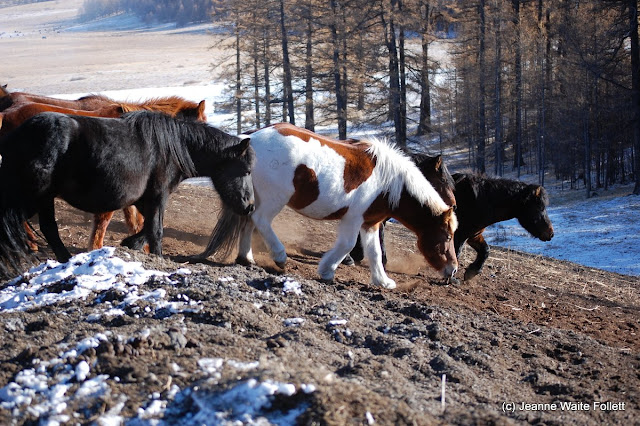 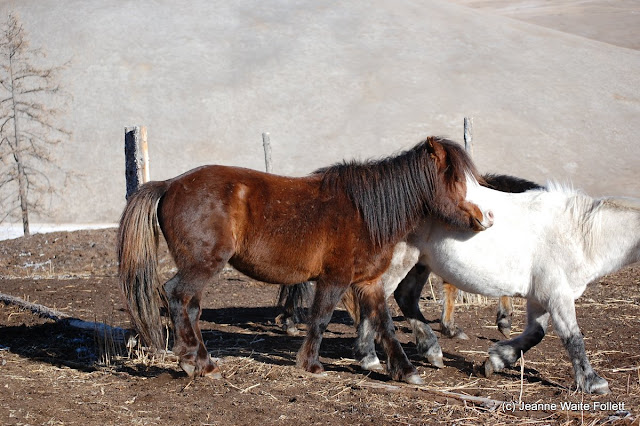 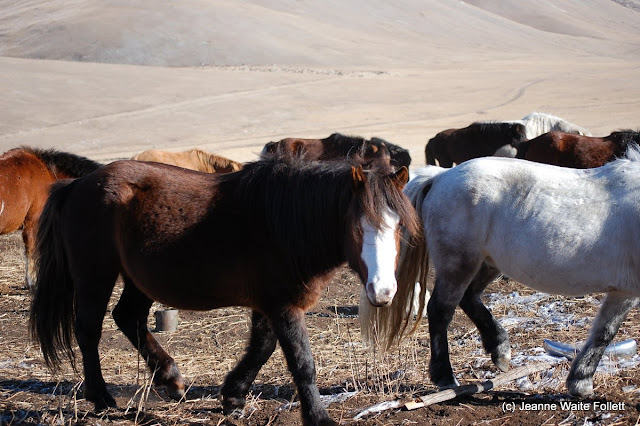 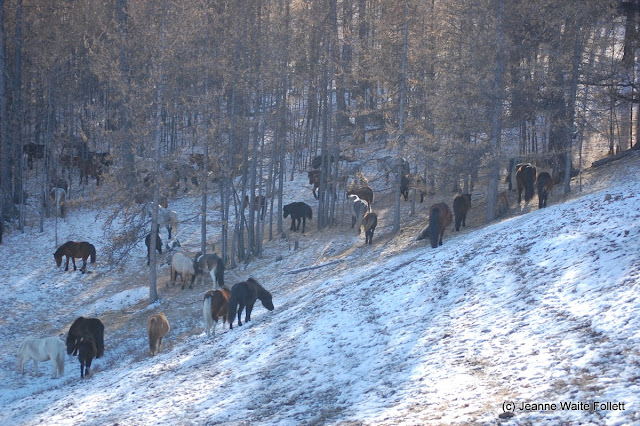 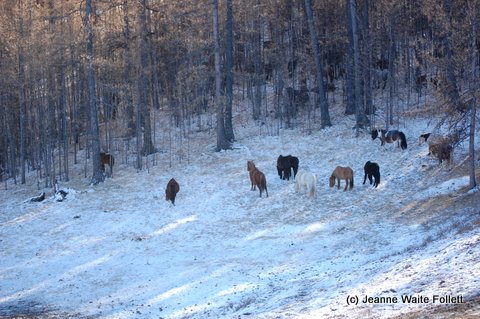 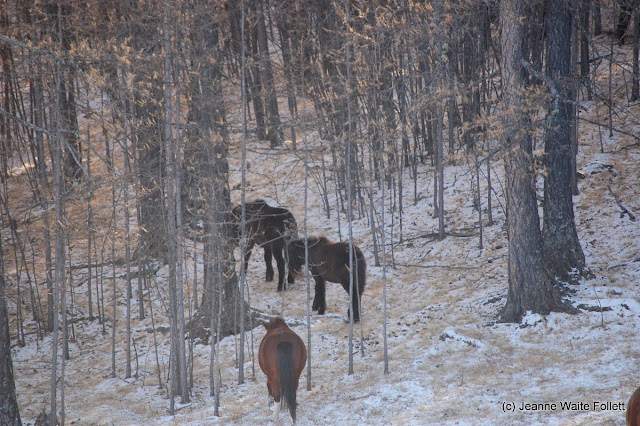 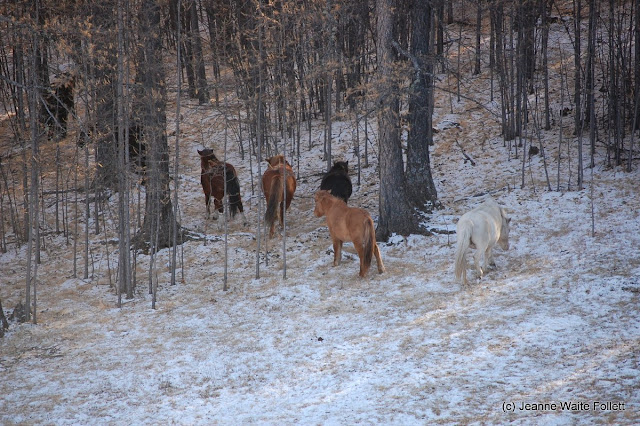 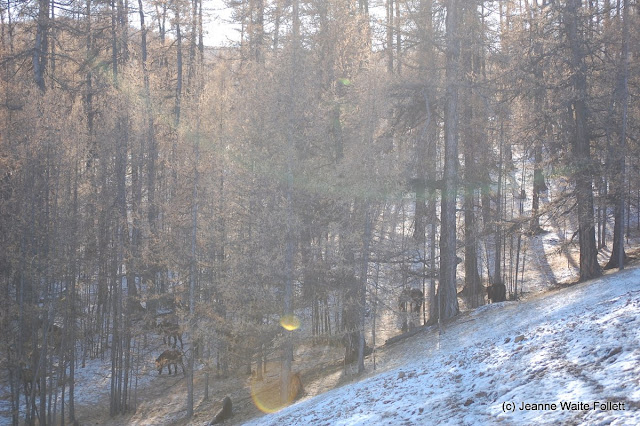 Batdorj and his brother Lhagvadorj mount their horses, turn left, and set off up the valley to hunt and kill those ones. 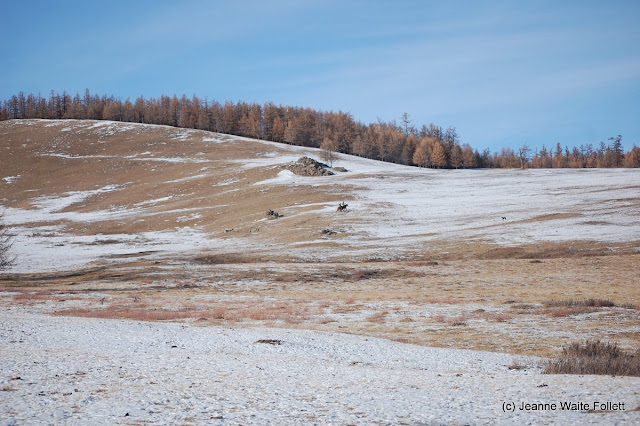 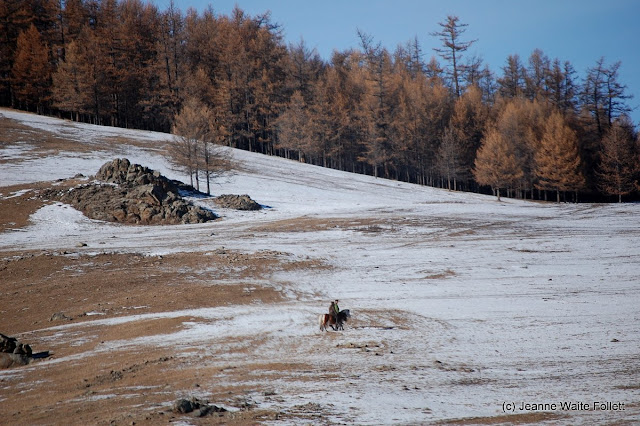 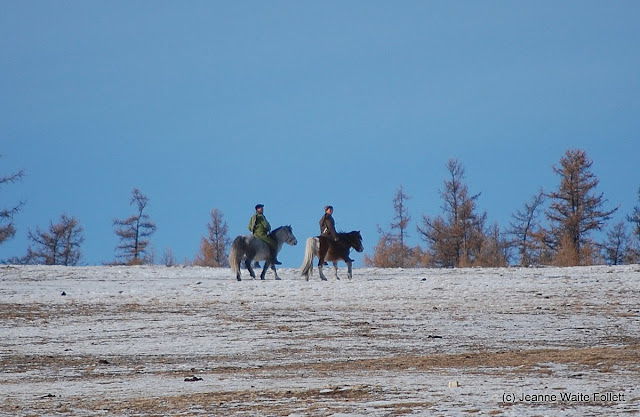 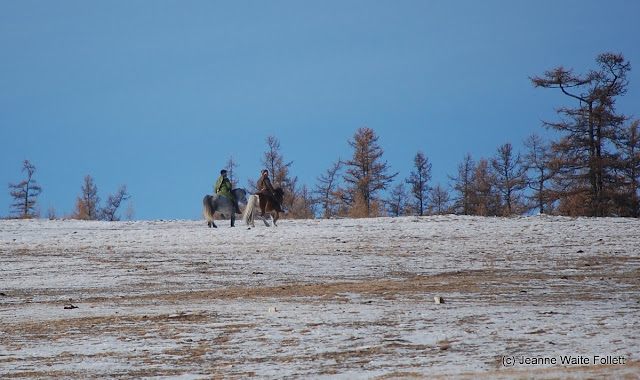 As we leave their encampment and drive down the valley, the skeleton of a long-dead horse lies beside the trail. 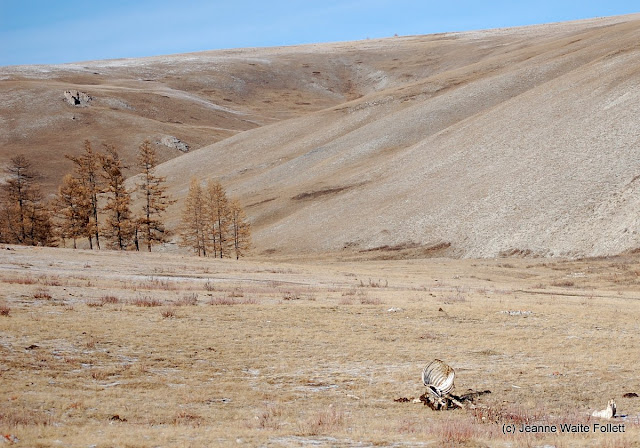