Mongolia, A Report from the Field: Serendipity Catches Us on the Side of the Road


Remember this line spoken by Humphrey Bogart in Casablanca?

Of all the gin joints, in all the towns,
in all the worlds, she walks into mine.

That’s what I'm thinking of when Cap asks Chimdee to stop the Mitsubishi van so he can take photos of the herd.

Of all the flocks of sheep, of all the herds of goats,
Of all the dozens we’ve seen, he takes a liking to this bunch.


I’m not sure what it is.   Their proximity (crossing right in front of us)?   The black sheep faces (many of them do)?   The multicolored goats (they all are)?   We've passed dozens of flocks and herds, but Cap takes a shine to this one.

Or perhaps it is just plain old serendipity paying a visit on the side of the road in a picturesque  valley. 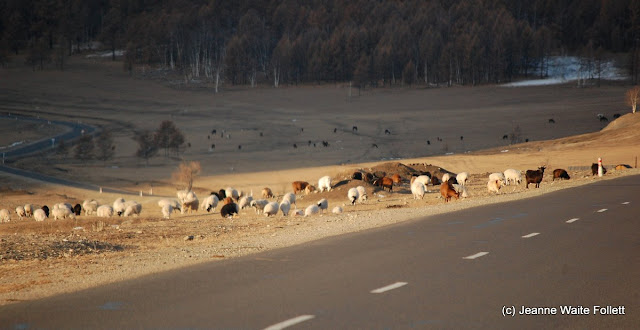 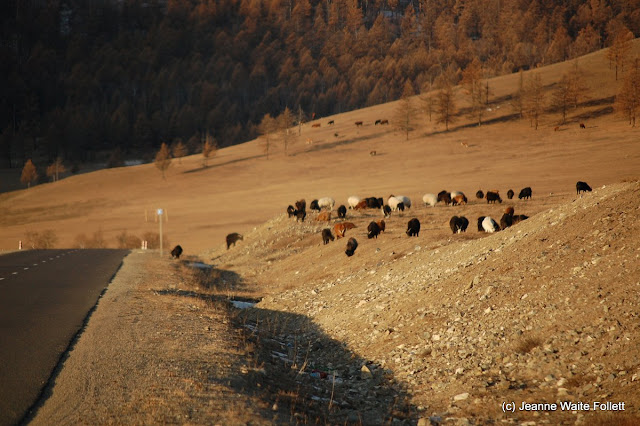 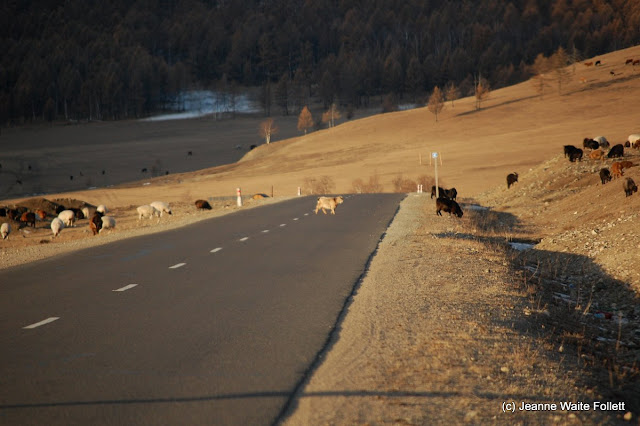 Whatever it is, Chimdee pulls over and parks.  Cap gets out to approach the animals that are still wandering, none too quickly, across the narrow road.   The rest of us wait in the vehicle for the herd to panic and scatter before him. 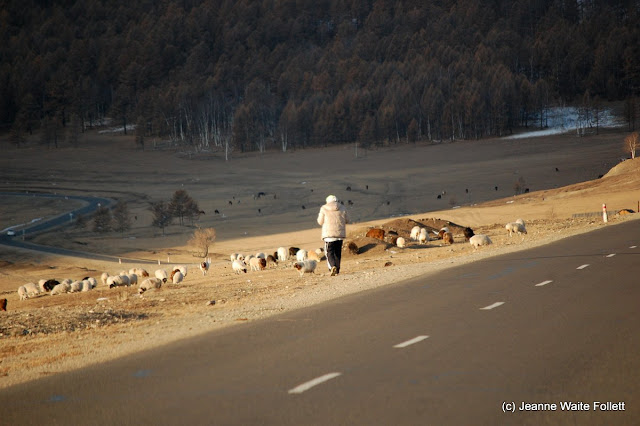 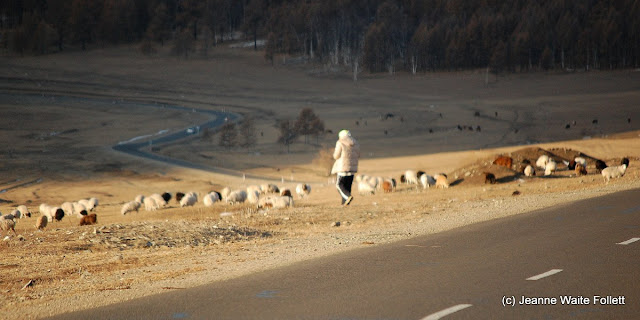 Cap continues taking photos as he moves closer.  Off in the distance I see a man on horseback approaching.   Oh, boy, I think.   I’ll bet he’s coming to see if we hit one of his animals, or if Cap is goat-thieving. 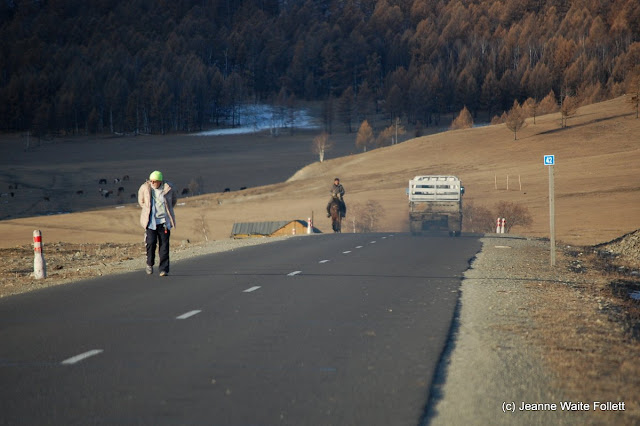 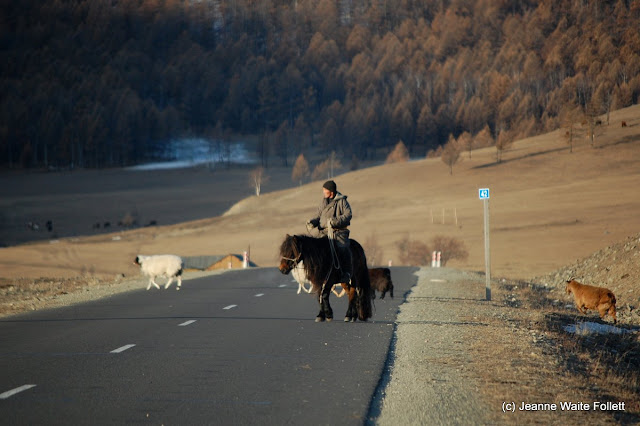 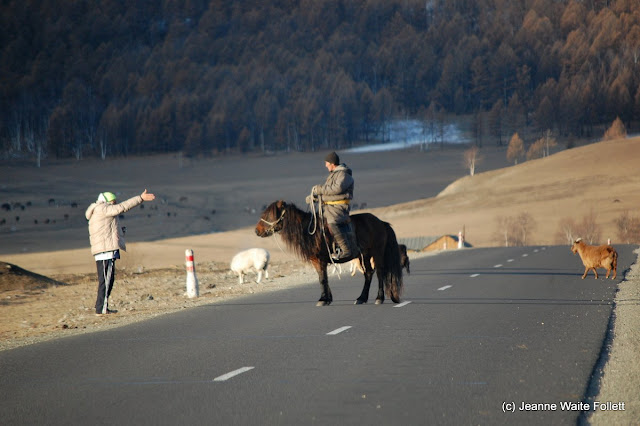 As the horseman gets near, Cap sticks out his hand and they shake.   Pretty soon the Mongol is off his horse and Cap has his arm around the man’s shoulders.   Then they both move down a small embankment.   By this time, Chimdee is out there translating. 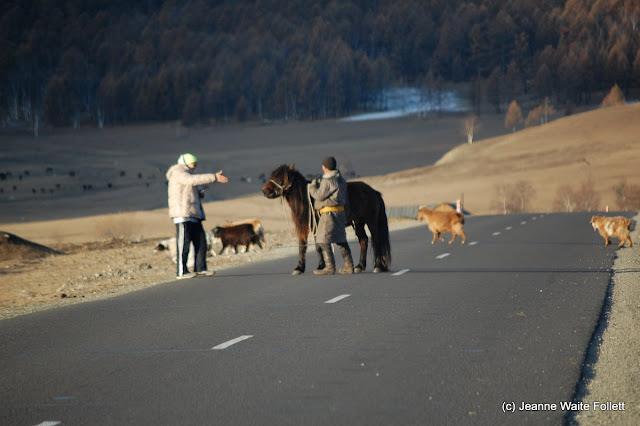 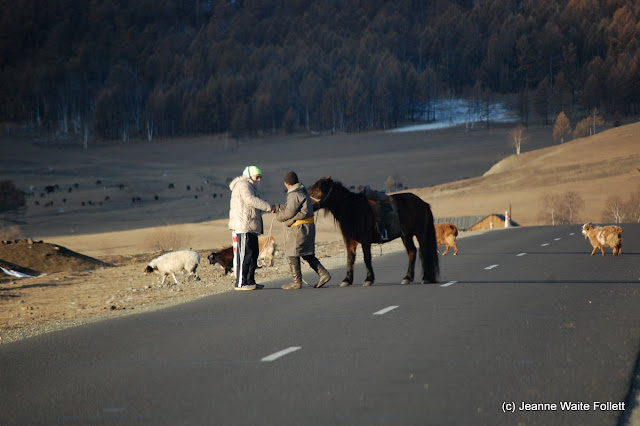 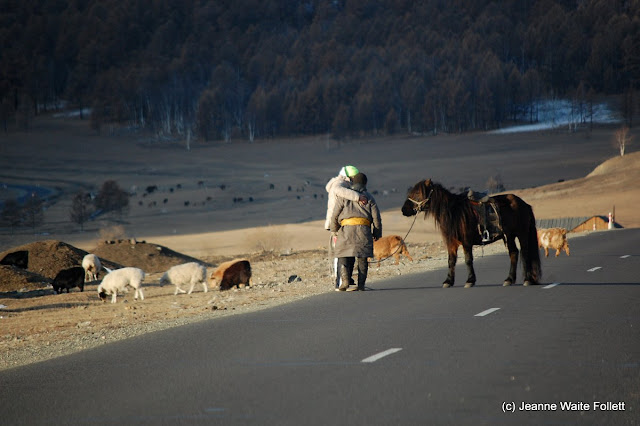 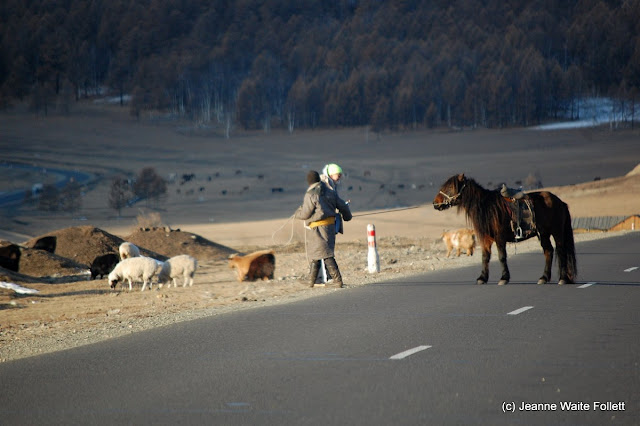 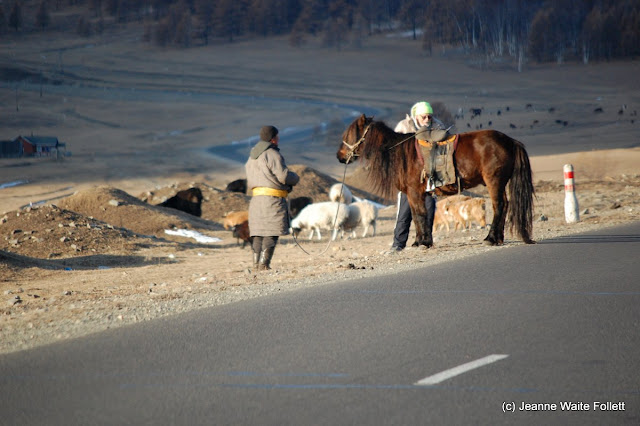 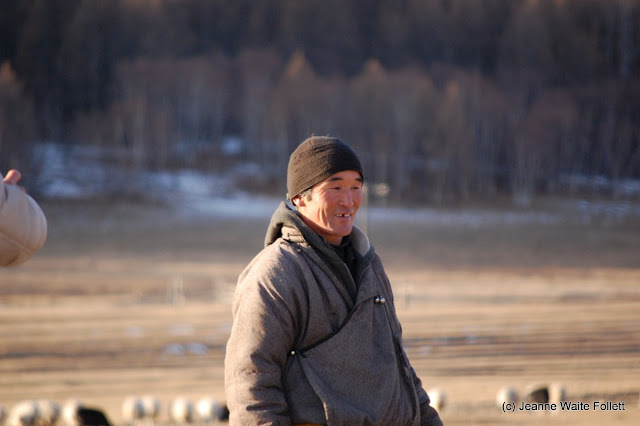 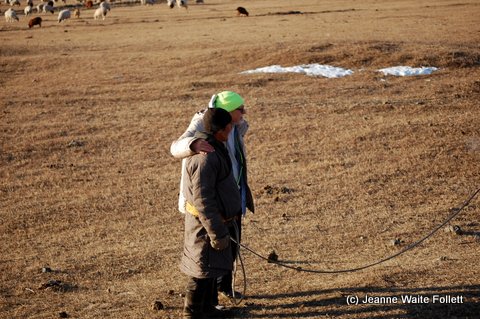 I can't stand it.   In an instant, I'm out of the vehicle, armed with cameras.  I slip on the ball bearing pebbles on the embankment and land on my right leg, near my hip.   It hurt, yeah, but certainly not enough to account for the spectacular bruise that develops over the next week. 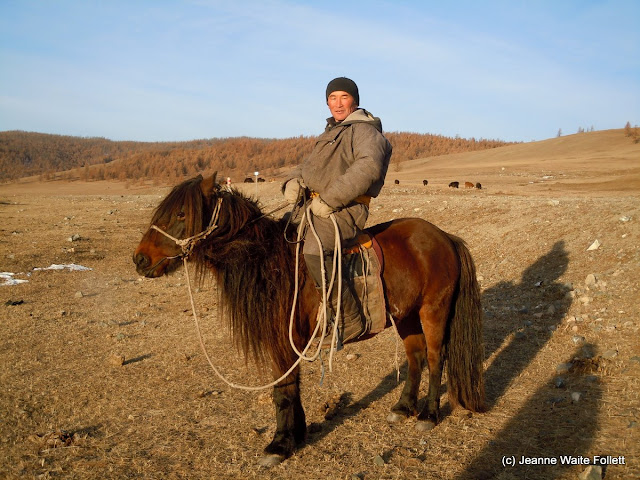 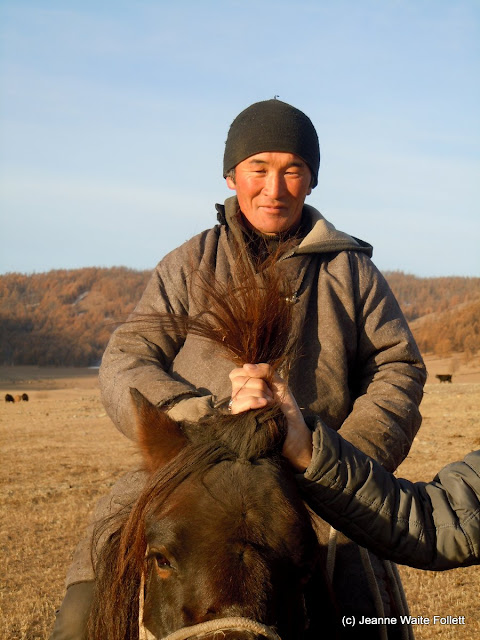 One thing follows another, and….

I’ll let the photos tell the tale, because right about now is when Yusef, still iin the van, says to Patti, "Oh, my god!   Jeanne's getting up on the horse.   I need to get out there."

Cap Chastain took the following sequence of photos with my camera, though they bear the  watermark of my copyright. 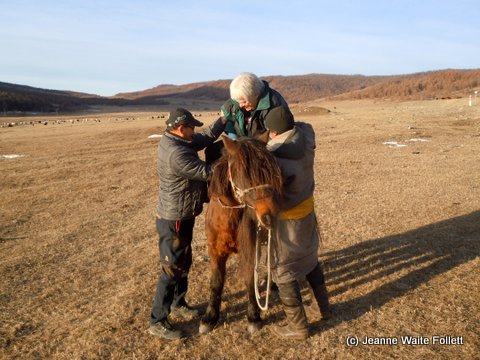 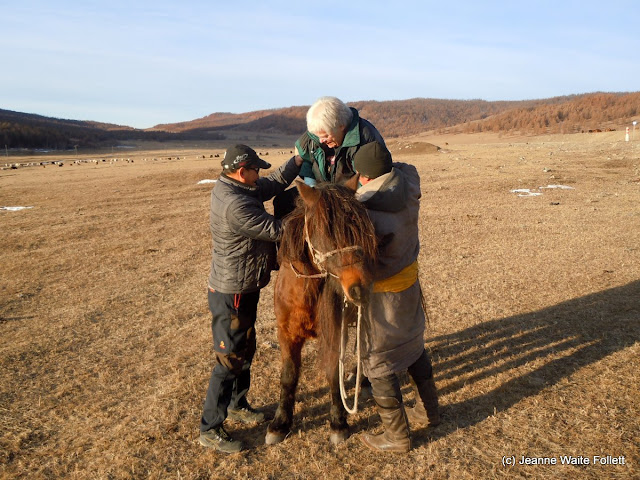 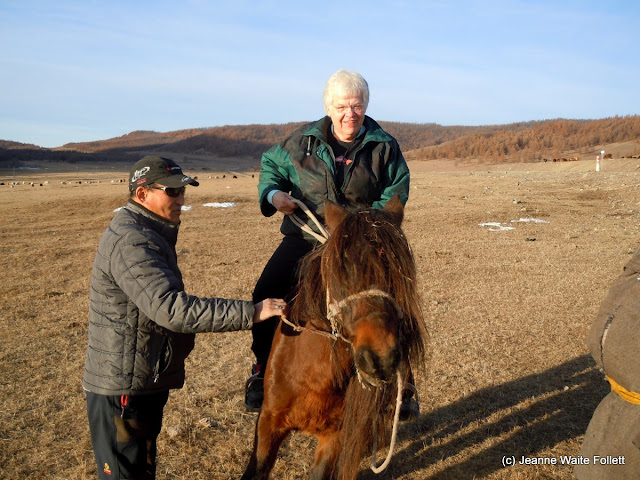 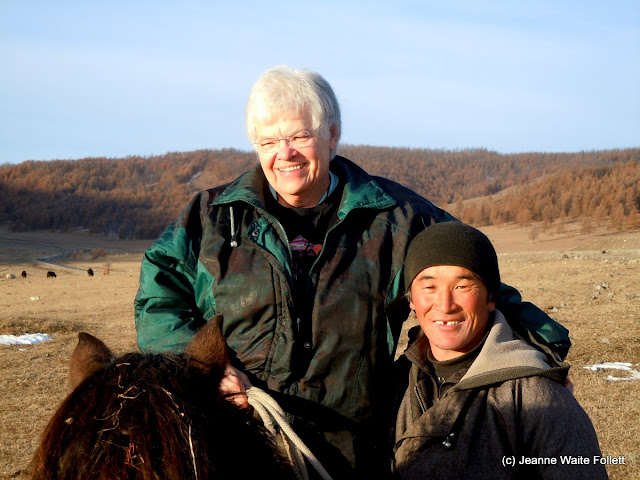 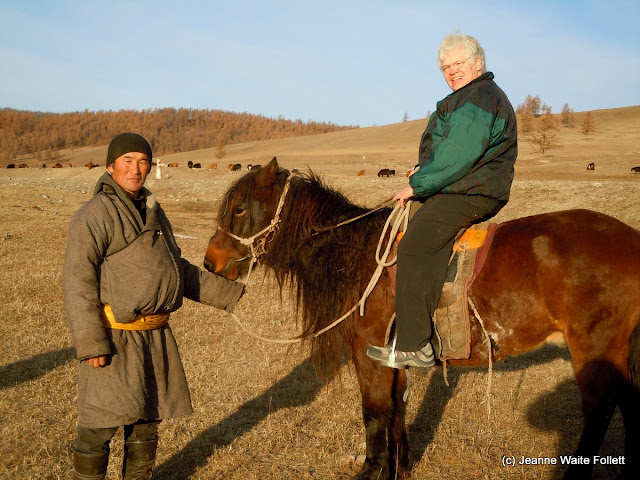 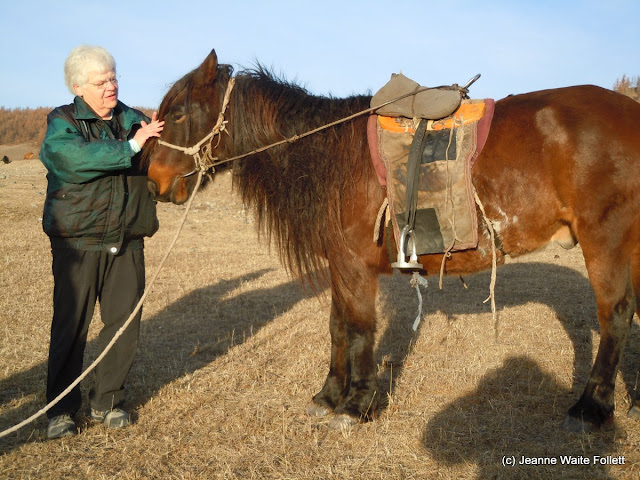 I will admit to feeling a special connection to all animals, but there is something quite special about this horse. 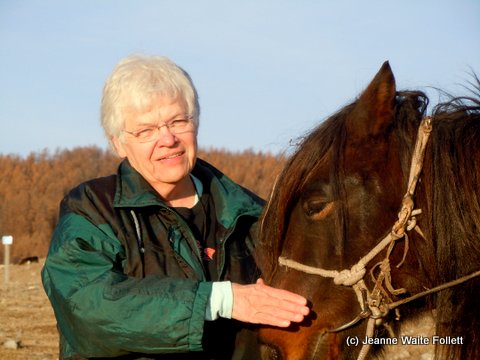 As I said earlier, Cap took the above photos of me.

Except this one.   This one I took. 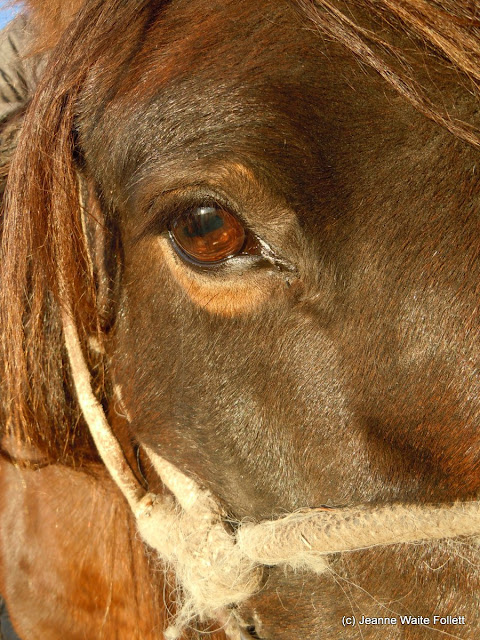 And we're off, with many handshakes, thanks, and a few tugriks to the herder for the special treat.

Meanwhile, the rest of the herd is still trying to decide which side of the road they want to be on. 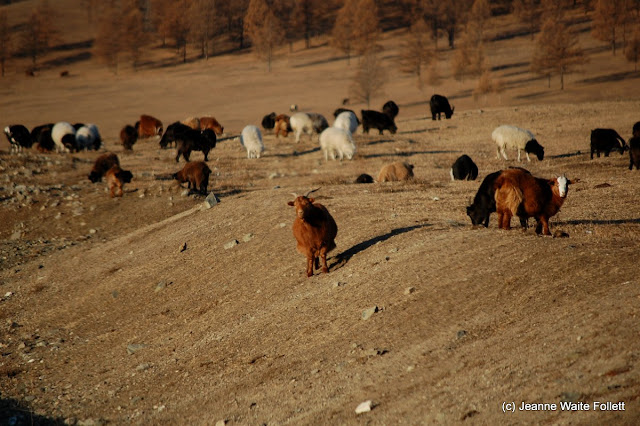