Beyond the Black and White Challenge

There is a fun challenge making the rounds on that social media.   It reads:

Seven days, seven black and white photographs of your life. No humans. No explanations. I was nominated by (insert name) . I will challenge someone every day. Day 4 of 7. Today, I nominate (insert name).

I've had a blast converting some of my photos to black and white.   Here they are.   Yes, I know there are more than seven.   I like to have options.

Here on my blog, you get an extra treat.   Explanations.   Those aren't allowed in the Facebook challenge.

2.   The Cape buffalo, one of the most dangerous animals  in Africa, with its constant companion, the red-billed oxpecker.   These birds are native to sub-Saharan Africa, and spend their lives removing insects and parasites from buffalo, zebra, and other animals.   A very symbiotic relationship in the Maasai Mara and elsewhere.

If I knew how to do it, I would have left the remarkable red and yellow color in the beak, with the balance of the image in black and white. 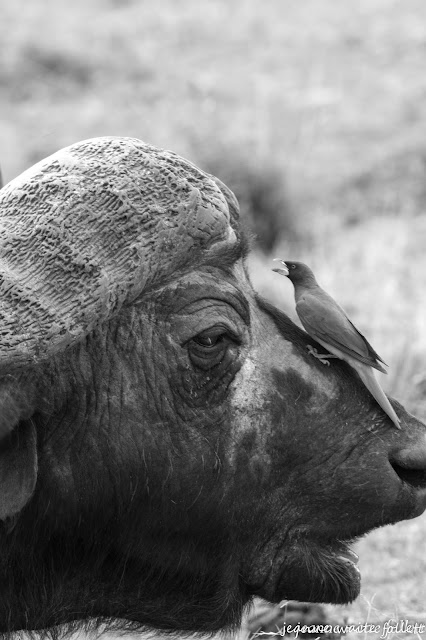 3.  The Potola Palace in Lhasa, Tibet.   Once the actual home of the Dalai Lama, it is now a tourist destination under the rule of China.    I wanted to visit this edifice since I was a small child.   The palace reaches an altitude of 12, 500 feet and I was almost there when I was on the top floor of the red palace (the center structure).   On the day I was allowed to visit, I climbed a multitude of rock steps to the entry and climbed a multitude of ladders (no stairways) to reach the top.  What's another 505 feet in altitude from Lhasa's 11,995 feet when you already have pulmonary edema from the elevation?

No photographs of the interior were allowed. 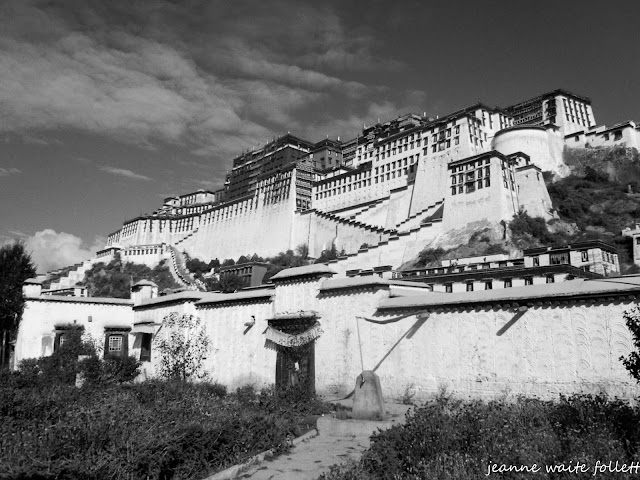 4.   The Great Wall of China at Jinshanling.   This section of the wall is not restored and there were no hordes of tourists, other than the 16 of us.   This photo illustrates the horrendous and far-reaching smog that covers China, and we were far from Beijing. 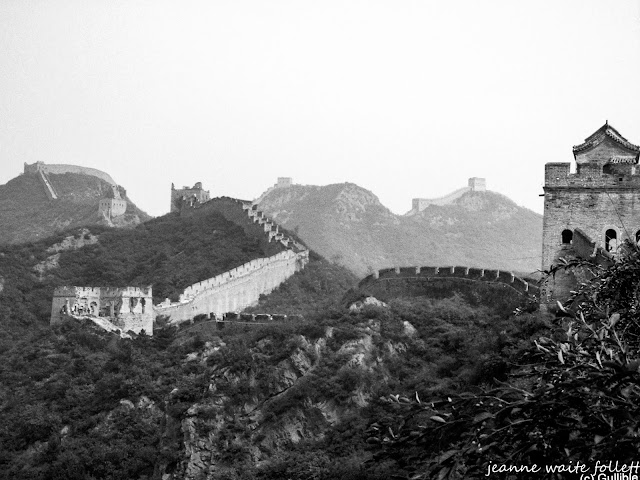 5.  Neuschwanstein castle in Bavaria, another childhood wish realized.    From Wikipedia:  " The Castle is a 19th-century Romanesque Revival palace on a rugged hill above the village of Hohenschwangau near Füssen in southwest Bavaria, Germany. The palace was commissioned by Ludwig II of Bavaria as a retreat and as a homage to Richard Wagner."

Interior photographs were not allowed, but if you'd like to see some, go here:   https://en.wikipedia.org/wiki/Neuschwanstein_Castle 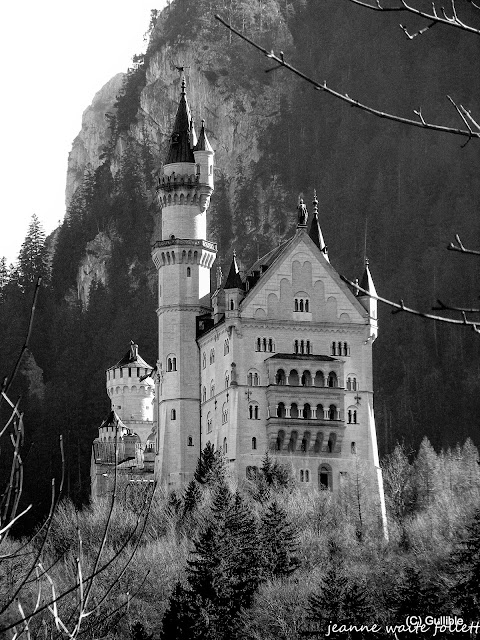 6.   The spire of St. Andrews church at Lake Bennet, British Columbia, Canada.   Built in 1899 by stampeders to the Klondike gold fields while they waited for the lakes and rivers to open.   This place marks the end of the 35 mile Chilkoot Trail that begins in Skagway, Alaska, and was the route the hopeful traveled.   I hiked it in 1973 with a bunch of friends, and I was also hopeful--hopeful that I could make it to Lake Bennet in time to catch the narrow-gauge White Pass and Yukon railroad to my destination and not have to hike back in the other direction. 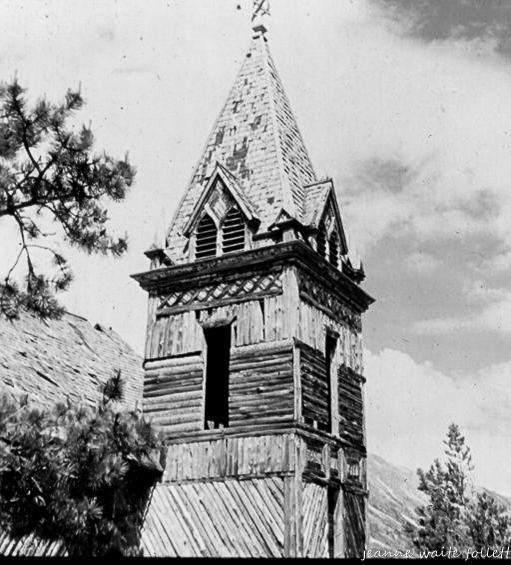 7.   The grave of famed British explorer Ernest Shackleton near the now-abandoned whaling station of Grytvikin on South Georgia Island in the Southern Ocean.   The tour company brochure titled this trip  Following in the Footsteps of Shackleton,  and I was hooked.

From Buenos Aires in Argentina, to the Falkland Islands, then 800 miles east to South Georgia and a storm in which the waves--not winds--the waves reached 55 feet, back across the tumultuous Southern Ocean to the Antarctic Peninsula, across the Drake Passage, west into the Beagle Channel to Ushuaia.   All the while reading Dallas Murphy's book Rounding the Horn--Being the Story of Williwaws and Windjammers, Drake, Darwin, Murdered Missionaries and Naked Natives--a Deck's-eye View of Cape Horn.

I was immersed in history and adventure and loving every minute of it.  By all means, read Murphy's book and "Endurance" by Alfred Lansing, the tale of Shackleton and the greatest survival story ever.

The pronunciation of Grytvikin is not as difficult as you think.   (I know you skipped over it after the first syllable.)   It's grit-VICK-en. 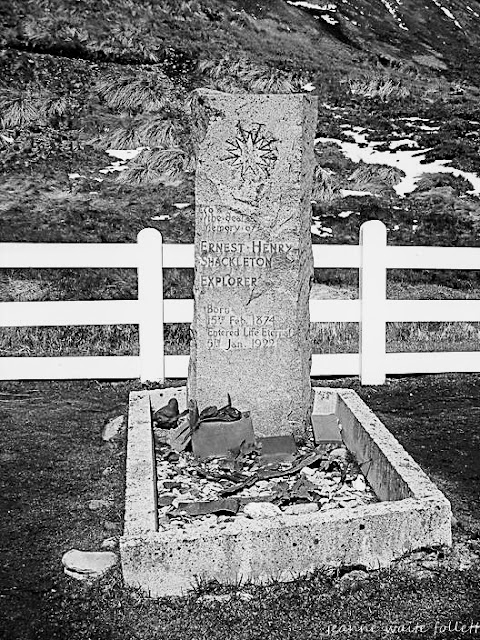 8.  Shiva Temples, Kalna, Barddhaman, West Bengal.    These 108 temples continue around  in a complete circle, and were some of the many Muslim temples I visited during a seven-day voyage on the Ganges River.   These were in a riverside village called Kalna. 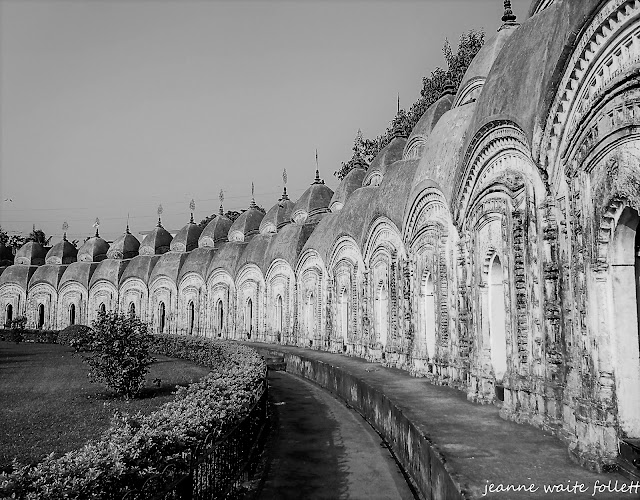 9.   The nauka, a traditional boat used for transportation and hauling freight on the Ganges River and other waterways of India.  Though small,  I saw everything from people to cattle to motorcycles transported on these boats.   Propulsion is by a long pole.   In color, this image is striking in its simplicity. 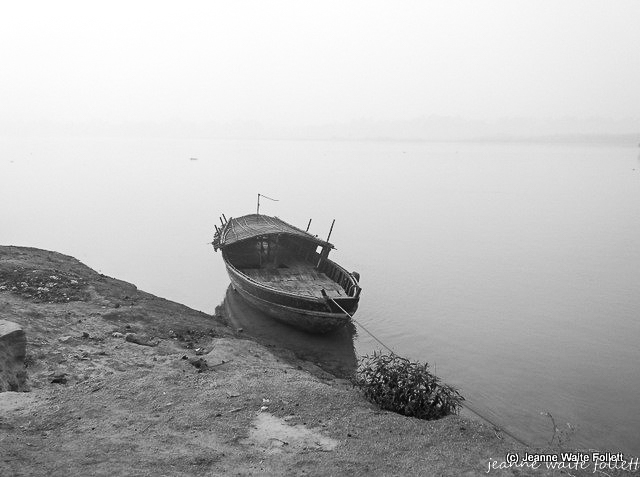 10.   We know this famous 12th century ruler as Genghis Khan.   In his  homeland of Mongolia, he is known as Chinggis Khan.    He united the tribes of Mongolia to form the Mongol Empire, the largest contiguous empire in history.   His warriors rampaged west into Europe and didn't stop until they were at knocking on the door of Vienna, Austria, and then only because the warrior leaders were informed that the great khan was dying and they were required to return to Mongolia.

Though his armies were ruthless and left millions dead (some claim 40 million) in their wake, Chinggis Khan modernized Mongolia, believed in religious freedom, and opened the Asian East to the European West.

This photo of the face of his stainless steel equestrian statue was taken a distance out of Ulanbataar, Mongolia, where the edifice rises 131 feet. 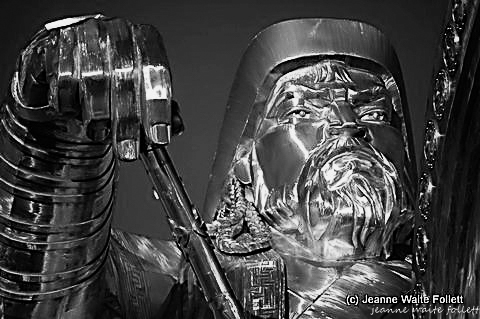 11.   As long as we're in Mongolia, this photo  is of a Mongolian herder crossing the road on his way to gather his flocks before nightfall.

The herder is carrying a lasso-pole, called an uurga, to assist in herding as well as to isolate an individual animal.

In the color photo, the herder is silhouetted against a brilliant sunset.   Nonetheless, it is striking in black and white, also. 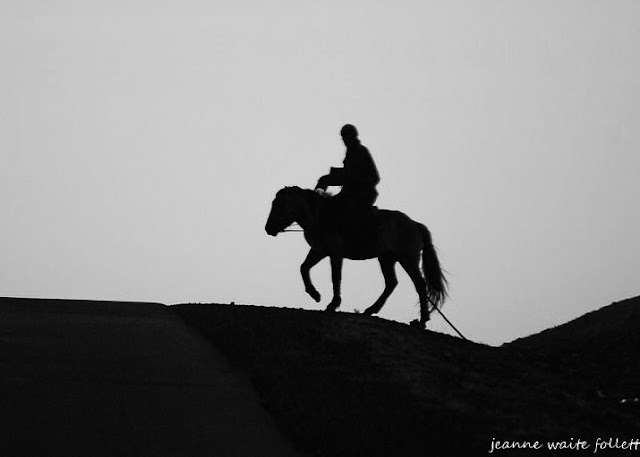 12.   This photo is of a wooden plank walkway being reinforced and rebuilt along the sheer cliff in one of the many gorges and canyons along the Yangtze River in China.   Note the bamboo scaffolding for the workmen hanging under the main walkway.   This trail goes on for miles. 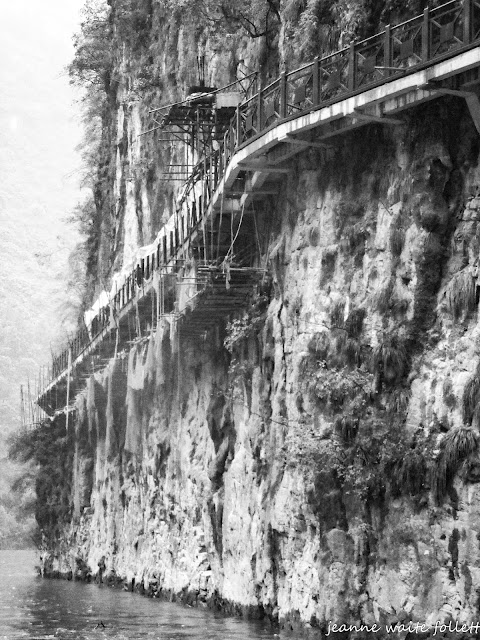 13.   One of my favorite birds, the American Dipper was once called the water ouzel, a name I much prefer because it is as unusual as the bird itself.

I have spent hours observing and photographing these gray-with-a-touch-of-brown birds.   Roughly the size of a robin, they swim or walk underwater in search of small fish and other goodies in streams and lakes.  Their feet are unusually strong, enabling them to hang onto stones and rocks in swift currents. 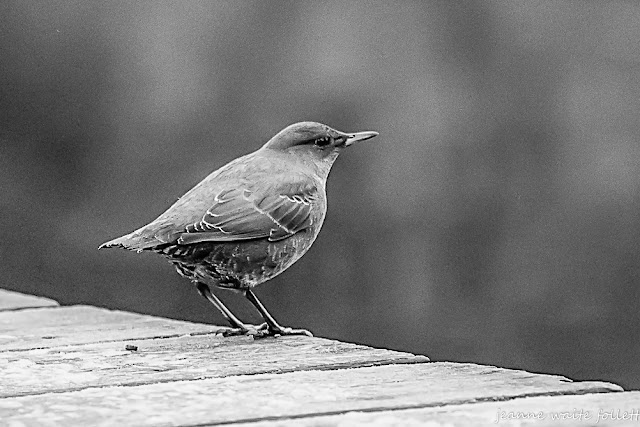 14.   This photo of a scrum of referees who are considering the correct call in a game was taken in the marsh area of the Maasai Mara in Kenya. 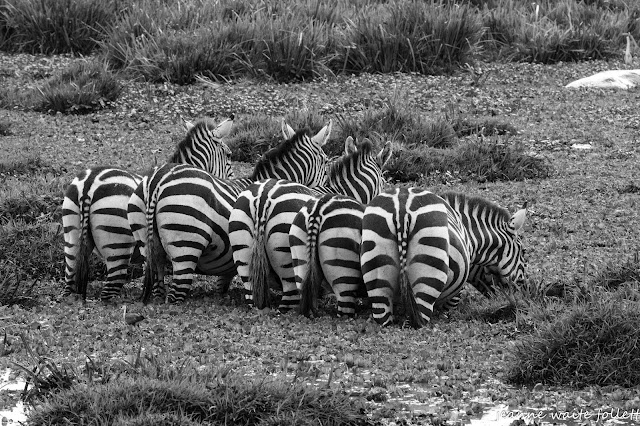 15.   Love this photo of a Coastal Brown bear cub in Lake Clark National Park and Reserve.   There are a series of three photos taken as this cub wiped its front paw down its face.   Did I mention its mama was nearby? 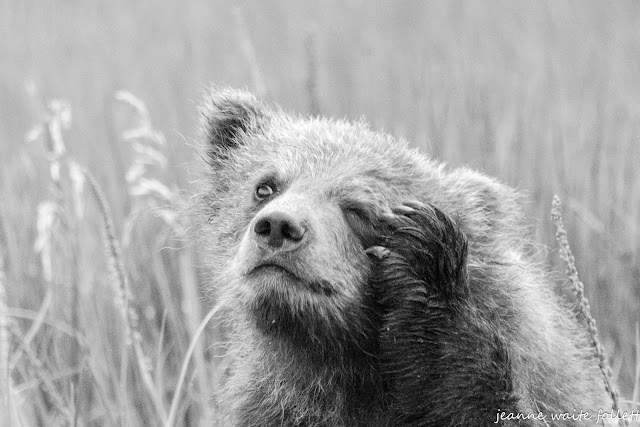 16.   Along with the Cape Buffalo, add the hippopotamus to the most dangerous animals lists of Africa.   It is not smiling at me.   This is a challenge pose, as are the great yawns in which the hippo shows it ivory tusks.   As with elephants, hippos are vulnerable because of those tusks, which are favored for use as dagger handles and scrimshaw.

Though the third largest land animal in the world, the hippo spends most of its time in the water to stay cool.

17.   Another photo from Maasai Mara in Kenya.   This zebra is scratching its jaw on the downfall.   It was the texture of the log that drew me to convert this to the black and white of the zebra, in a combination of textures. 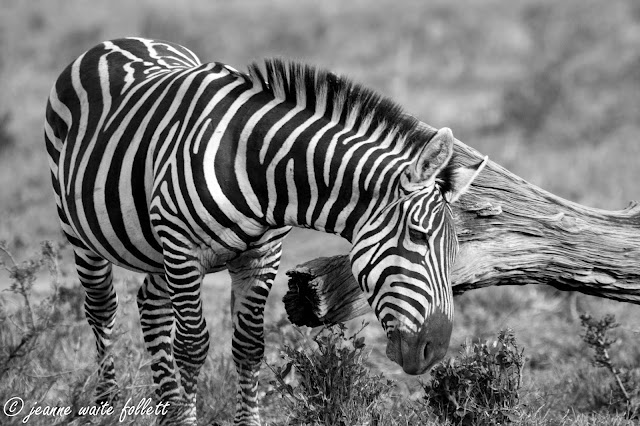 18.  This is one of three lion cubs that enchanted me on my trip to the Maasai Mara.    As it and two other cubs napped and waited on this striking log, mama and other lionesses of the pride were napping on a termite mound a couple hundred yards away.  The cubs stayed right where they were told to stay until one lioness came to gather them. 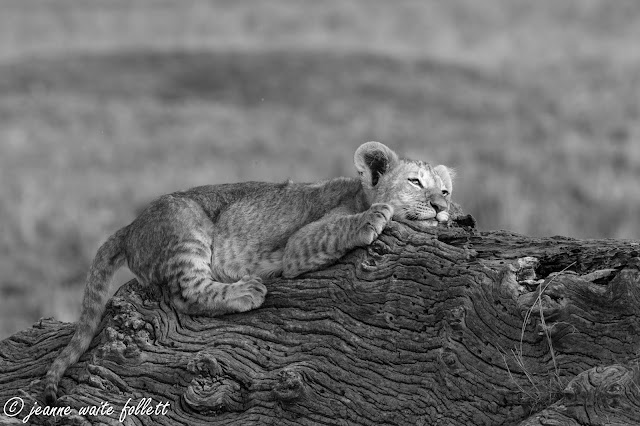