FROM THE TRAVEL GUIDES:

Yeah, yeah, yeah, I think as I put suntan lotion and my lightest weight safari pants in my duffle bag.

“African mornings can be chilly.”

I live in Alaska.   I know chilly.

Just in case, I also take a lightweight fleece pullover and a lightweight jacket.   And a windbreaker that will serve as a rain jacket in the event of soft showers.

I reject a sun hat with a long flap that protects the back of my neck and opt instead for just a visor.   Then I add two neckties that, when soaked in water and wrapped around my neck, provide cooling by evaporation.

Well, hello?   It’s winter in Africa.   I never dreamed it could get this cold in Africa.  Marg says it’s just a couple degrees above freezing at 35 Fahrenheit.   She doesn’t say anything after that.   Neither do Laura or Holly.   I think their lips are numb.

We aren’t on top of Mt. Kilimanjaro in Kenya, either.   We’re at roughly a thousand feet above sea level in the Sabi Sands Game Reserve adjacent to Kruger National Park in South Africa.

And it’s cold.  So cold I am thankful that Kirkman’s Kamp has provided us with extra blankets and water bottles.   “Put it between your legs,” says Matt.   Good advice.

I’m wearing the heaviest tee I can find, a long-sleeved SPF shirt, the fleece pullover, the windbreaker, and a jacket.   Five layers.   The hot water bottle is in my lap, with a blanket covering it and my legs.   I keep my hands on the hot bottle so they will be flexible enough to work the camera controls.


To make matters worse, we’ve dipped down into the Sand river bottom and the change in temperature is noticeable.   Surely the water will be frozen, I think.

It isn’t.   Then I forget about the cold because there are two leopards in the tall reeds and grasses that line the river and Matt has aimed the safari vehicle into them, essentially blinding us to anything that isn’t near enough to touch.


Richard, our tracker, rides point on a seat added to the front of the vehicle.   From his position, he can see much that we can’t, and he guides Matt with hand signals.

He finds them, those two green-eyed beauties.   A mother and daughter, and there are lessons being taught, lessons being practiced and learned.   The daughter stalks and attacks her mother again and again in the tall grass, readying herself for when she's on her own. 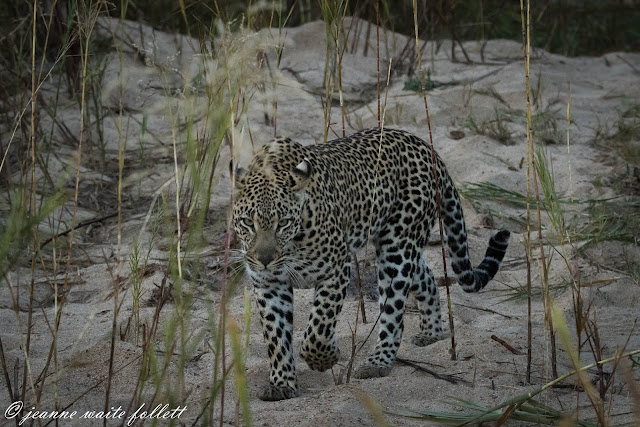 The rising sun reaches the river bottom, but the hot water bottle stays put, as does the blanket while we continue to follow and shoot the two leopards.

“They’re timed that way,” I joke.   “They get cold when the sun comes up and brings warmth.” 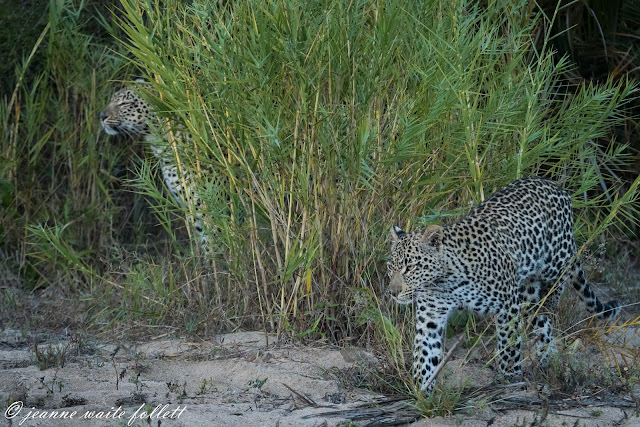 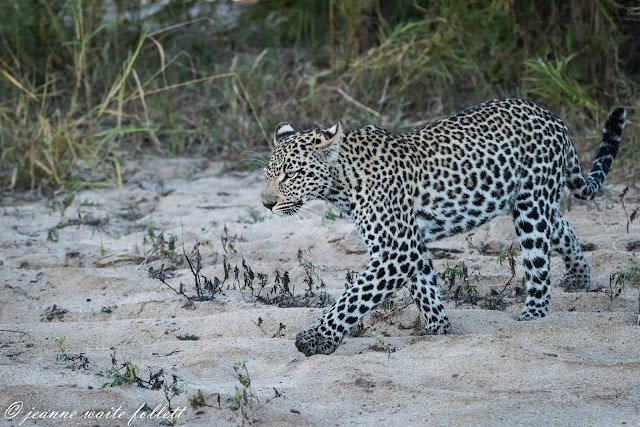 These two are not the first leopards we see here in the Sabi Sands reserve.   Nor are they are
the last.   We find them all over the place.  Seven, if I remember correctly.   Or maybe it was nine. 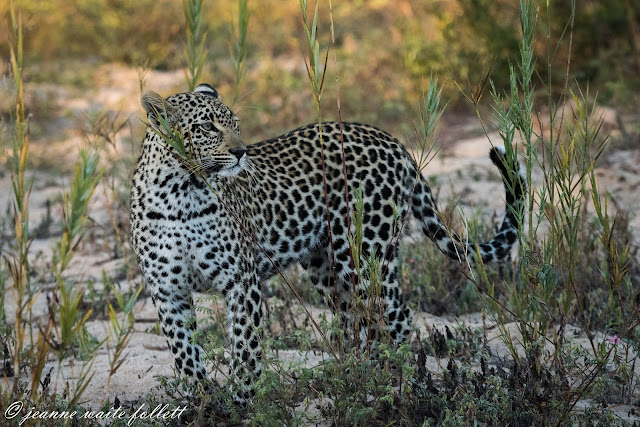 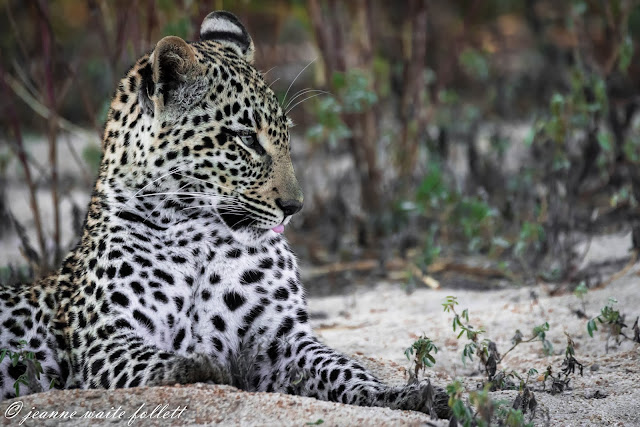 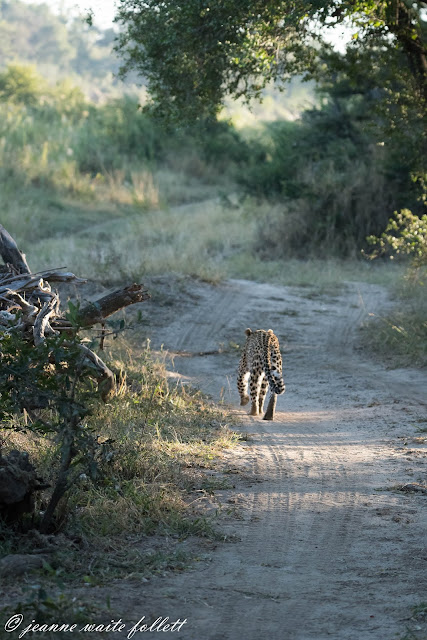 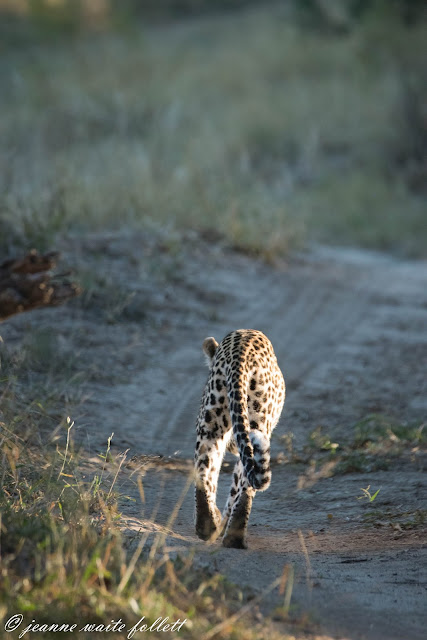 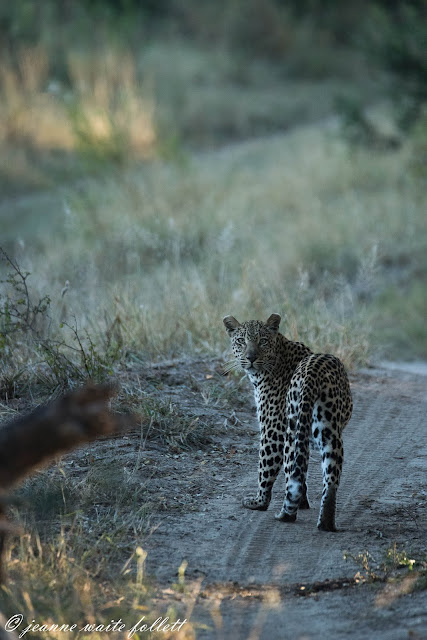 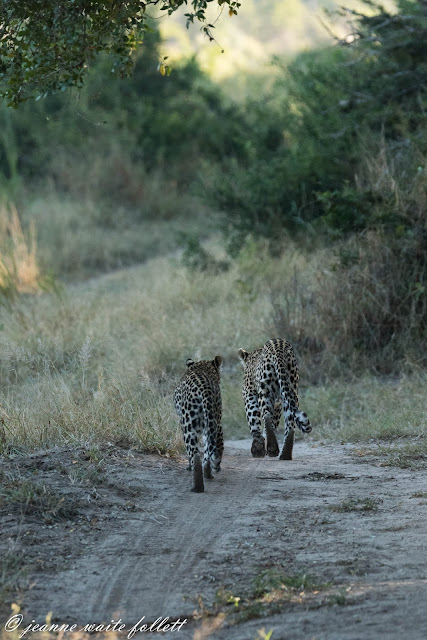 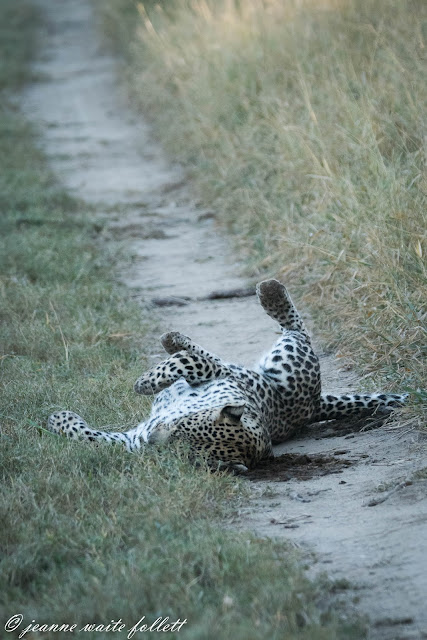 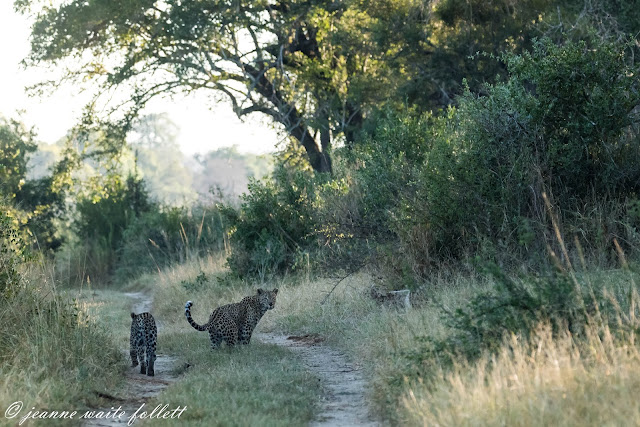 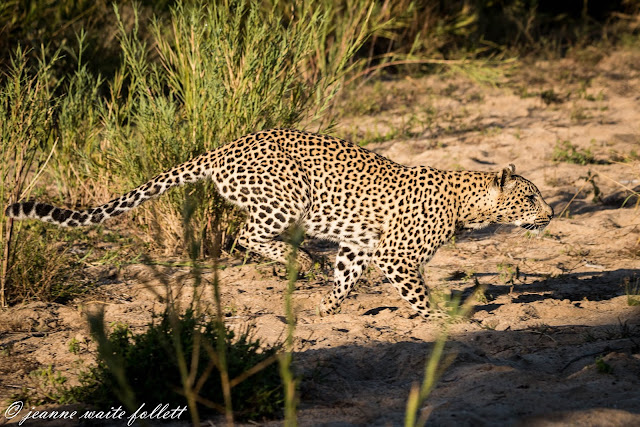 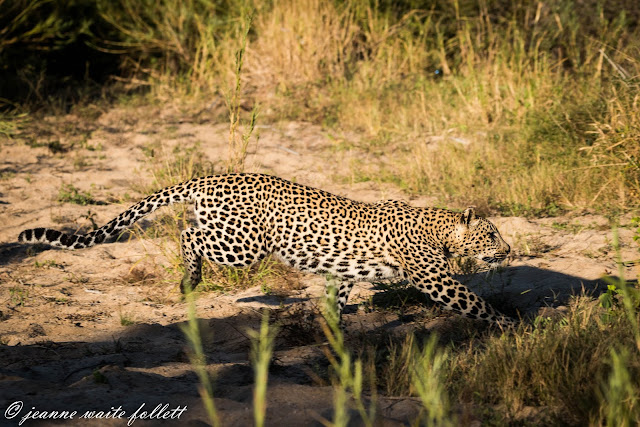 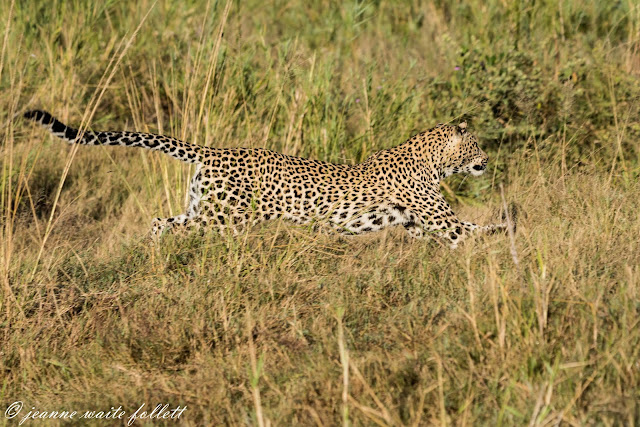 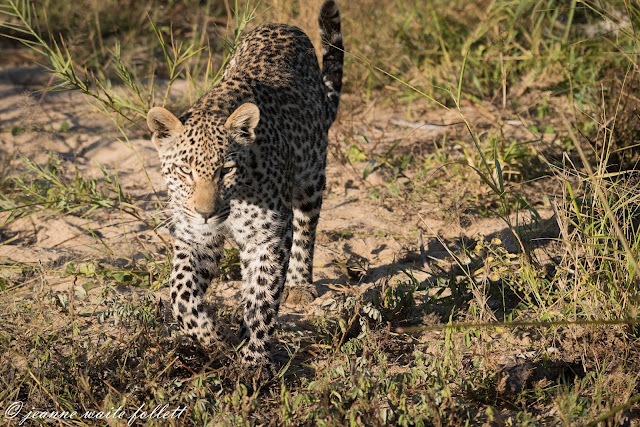 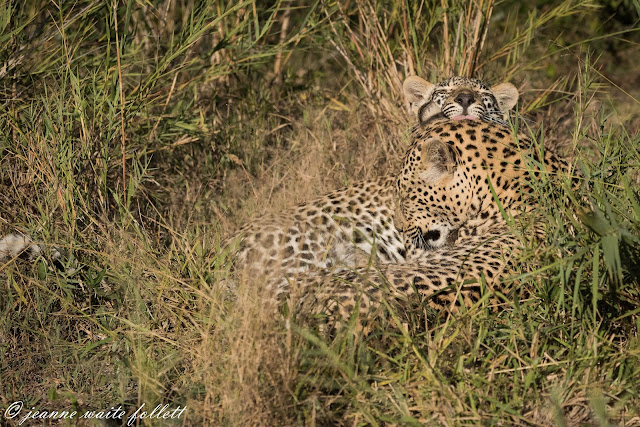 Last night, Matt and Richard took us to see our first leopard—a three-year-old male near camp that was trying to sleep as the sun went down.  It was also trying to remain unnoticed by the impala and kudu that were near, so they wouldn’t sound the alarm. 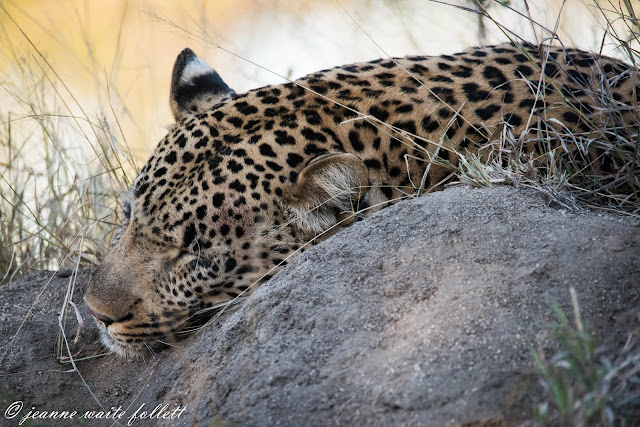 It was all about survival for the leopard, who was trying to establish himself in this territory and did not want any run-ins with other males.

We left the leopard sleeping on his most excellent mound, almost hidden by the vegetation.
In a future chapter, I’ll talk about leopards again, and how a canny old male taught me a lesson about the ins and outs of habituation.