In an act of bravery and defiance rarely witnessed by modern humankind, Marg carefully opens her door and steps out to brave the dangerous denizens of the dark.

Heart in mouth, she makes the long journey from her room to our room and ducks inside to safety, or as safe as one can be in a bungalow that a juvenile elephant may or may not have been intent on caving in the roof the night before.

It’s 4 A.M.  when Marg successfully makes the eight-foot passage from her room to ours.   She doesn’t trip over the bench that lies in wait, like I would have done.

“Can you hear the lions?!” she says when she comes in.   “I’ve been awake since 2 o’clock, listening to them.”

We can’t and didn’t.  We were asleep.  She starts back to her room, promising to return if they start again.

She’s back and this time, awake now, we hear a lion roaring.

Let me describe how a lion’s roar sounds and looks.   It isn’t at all like MGM’s iconic Leo the lion.   (More about Leo later.)

First, the lion looks like it’s trying to retch up a massive hairball.   This takes two or three retches.

Or, maybe it’s trying to get enough air into its lungs, like pumping up a balloon before you let it go.

All of this is accompanied with a deep bass rumble, so deep it’s almost beyond human hearing capabilities. It vibrates through you right to your soul, but in watching the process, you really have to wonder if it hurts a lion to roar.

Anyway, as soon as Ranger Matt collects us from our rooms for morning safari, he’s immediately bombarded with news of the lions.   Very, very close lions.

Once we’re fortified with caffeine, we’re off to find the lions.  Another safari vehicle gets there first, which makes finding them much easier. 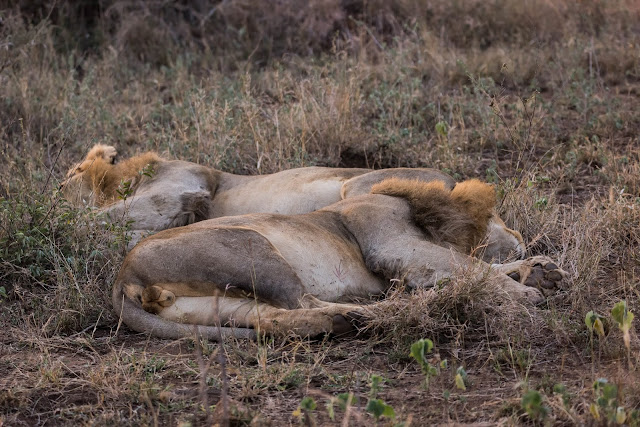 Actually, says Matt, the two lions probably crossed over from Kruger National Park during the night and got separated.  The roaring were attempts to locate each other.

They are probably siblings, he says, though not from the same birth.   One’s mane is more developed, indicating it is the older of the two.


We watch them for a while, and then go on our way.   They will sleep all day. 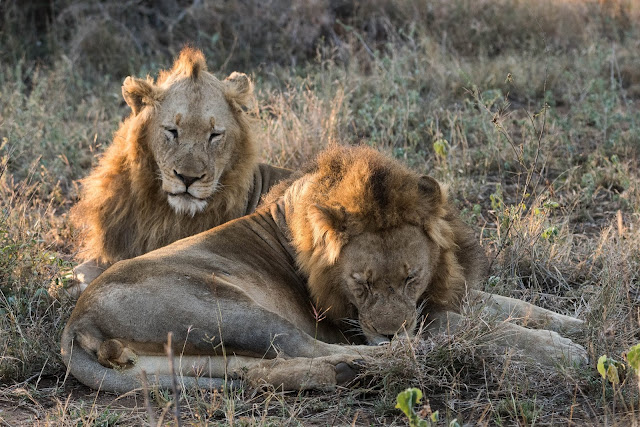 So, about MGM’s Leo.   I’ll make it quick, and ruin it for you like Santa, the Tooth Fairy, etc.  Prepare yourself.

First, check this link for a short video:

Take it from The Debunker with Ken Jennings:

But Leo has a dirty little secret. In the 1980s, … Leo has been lip-synching. The roar is "actually that of a tiger," says [sound engineer] Mangini. "Lions don't make that kind of ferocious noises, and the logo needed to be ferocious and majestic." So you're actually hearing a tiger roar every time you settle in to enjoy a fine film from MGM'...  Leo is the Milli Vanilli of the jungle.

So much for roaring lions.

The next morning we are driving towards the river bed when tracker Richard, riding point, spots the tracks of a male lion in the sand.  He gets off the vehicle and starts following them.   He is armed with a radio in leopard, lion, rhino, elephant, and Cape buffalo territory.

We continue on while Richard walks, and the sun comes up. 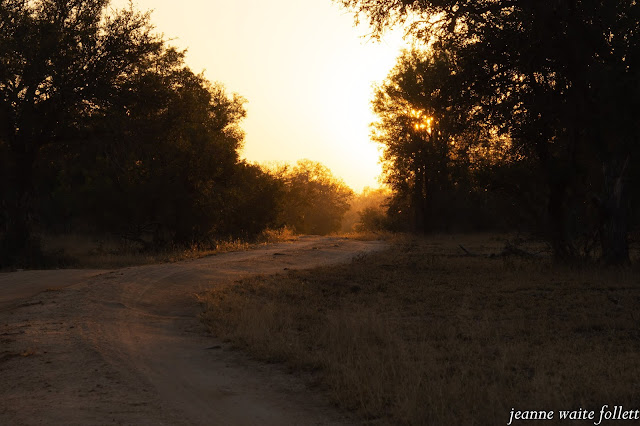 Then, we receive word that Richard and another tracker have found the two male lions that we saw yesterday.  Along dirt roads, across the bushveld, through who-knows-what kind of vegetation, Richard has followed the tracks of the beasts for about three miles and found them sacked out in an open clearing.

By the time we get there, the cats have moved into semi-shade. 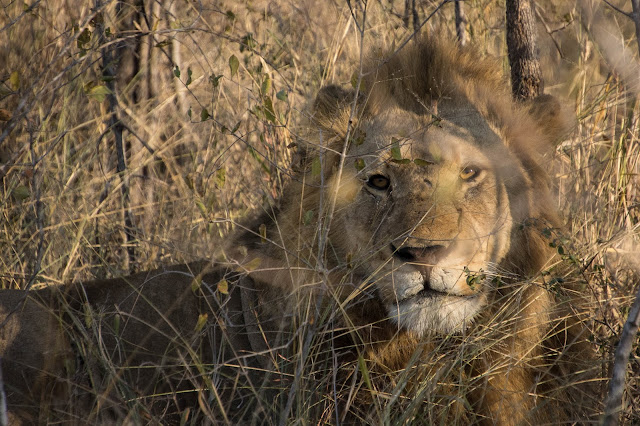 It is one of the most impressive things I have ever seen.  Three miles, unarmed, and successfully finding them.

The lions had doubled back on themselves a couple times during their nighttime travels, and they are ready for a long daytime sleep.

They move again, from the thick brush into a clearing where they will absorb the heat of the sun until it is too hot. 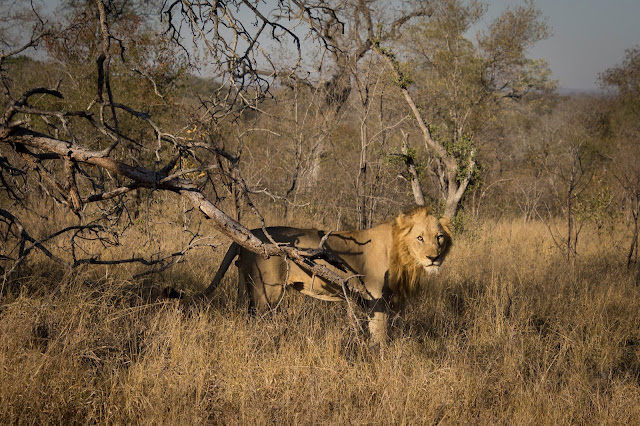 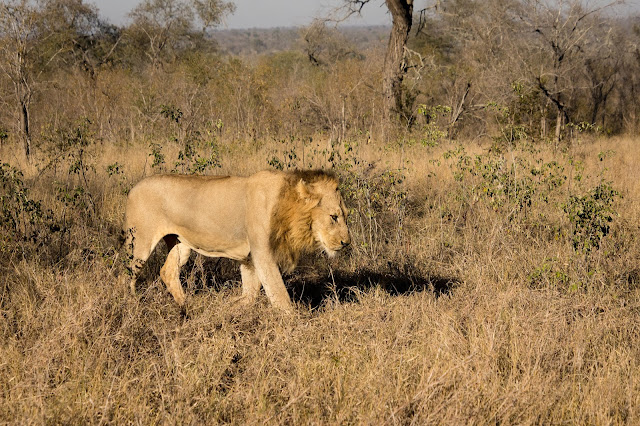 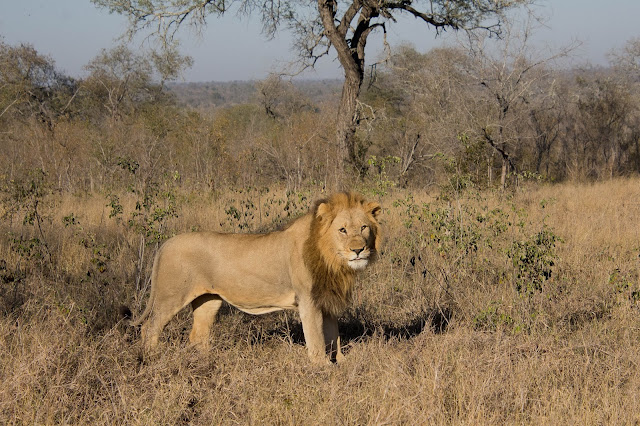 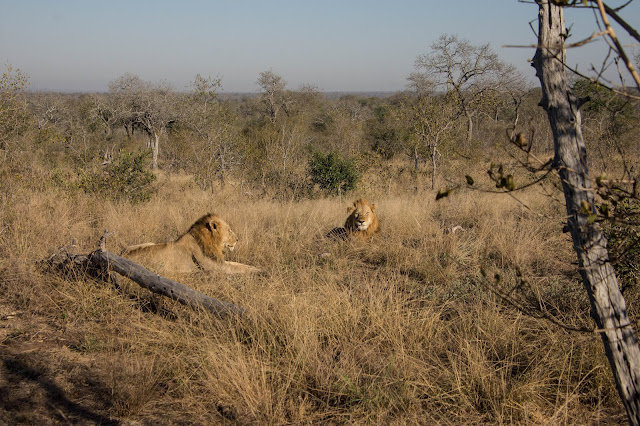 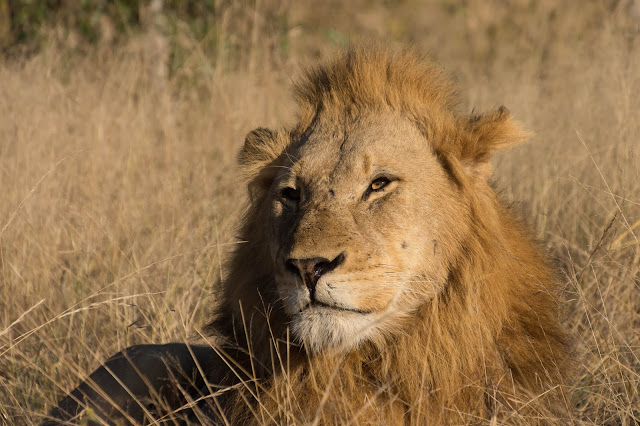 We take a few photos, and let them be. 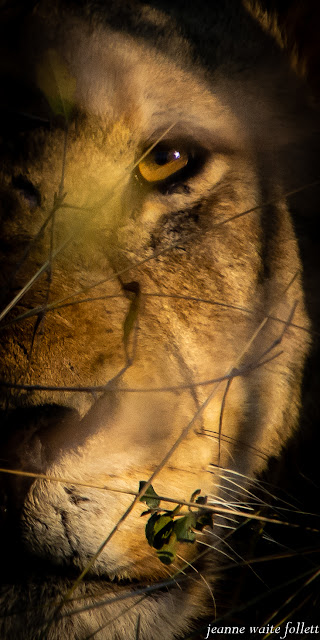