These holidays are times for family, friends, and remembering.   This piece was first posted in 2008.   I think it fitting that it be shared again .


I stood on my office chair, the one I use to sit at my computer, where through the magic of electronics I lay down on the monitor screen the words that seek release. I’ve learned a few things in my sixty-seven years on this earth, most of them the hard way. One of those things is that one should not stand on a wheeled chair to reach the top shelf.

The Fates of Falls were kind to me this day. Or, maybe they couldn’t believe anyone my age could be so foolish as to tempt them so brazenly. Maybe I was too fast for them, caught them with their mouths open. Maybe I stepped down to the safe footing of the floor before they could act, before they could topple me from my precarious perch atop a piece of furniture designed to roll easily across the floor.

But step down safely I did, my prize in hand—a card holder in the shape of a deer. The deer was cross-stitched many Christmases ago on a plastic mesh pattern, red bow around its neck, by my mother. The attached pouch is for holding Christmas cards. Before I could add the cards I am receiving daily, I have to empty it of last year’s cards, sort through the photos to save, address corrections, special notes and letters. That takes a while, and I linger over some.

Finally, the pouch is empty. I add the newer cards, making sure to keep envelopes with addresses I want to update. One card in particular gives me pause, or rather, the letter included in it. 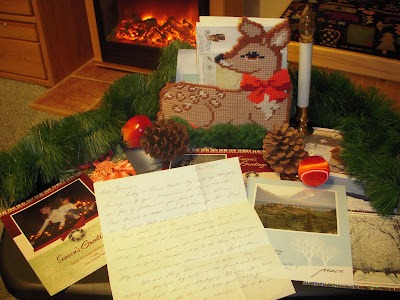 The one page letter is from my aunt, my father’s sister. As far as I know, she is my only living relative of my parents’ generation or older. There may be others, but living in Alaska since 1948 meant we didn’t keep close contact with many aunts and uncles. My mother did, writing numerous letters and slipping them into flimsy blue envelopes with red and blue edges that signaled the letter was to go by air mail.

I don’t think my father ever wrote a letter. Long distance telephone calls outside of Alaska were complicated and expensive, and reserved for emergencies. As a result, I never met many of my aunts and uncles, and, as I said, I think only Aunt Tacklee remains. She is in her early nineties, living in Montana. Both of my parents are gone.

Aunt Tacks wrote her letter to me on Dec. 7th. “Today is Pearl Harbor day and my thoughts have gone to you. I remember the day in ’41 when our family gathered at your parents’ home. We had brought a crib to welcome you home from the hospital. That’s when we heard the announcement of Pearl Harbor. Sad day.”

I am, of course, well aware that I was two weeks old when the Japanese attacked Pearl Harbor, but her note adds another dimension to my perception of my birth. My parents had just celebrated their first wedding anniversary. Now their country was at war, and they had an infant to tend. How worried they must have been, how concerned for the future. My father would serve in the Army-Air Corps, as it was called then, and be stationed in the Philippines. My mother and I would move in with her sister and her five children, while her husband also was gone.

I read and reread that letter from my aunt, the only person who can bridge my generation and hers. Did she mean I’d just come home from the hospital that day, two weeks after I was born? Why was I in the hospital that long? Or, did she mean they had brought the crib only that day? What did she mean by “our family?” Who was there? I know there were other relatives living there in Detroit. Were some of them present, some of my mother’s sisters? How did they feel? Were they frightened? Surely the men were already registered with the draft. Did they want to go, to defend their country from the attackers?

I remember that crib. I remember where in the small bedroom it was placed 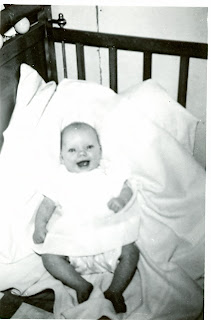 My aunt is of the old school of Christmas cards, that which required the inclusion of a hand-written letter, individually oriented to the recipient. No computer-printed, generic, one-size-fits-all letter for her. Her handwriting is small and neat, and much more legible than mine. Curiously, her cursive resembles my father’s, though I suppose it isn’t that surprising, assuming they both attended the same grade school in Thomas, West Virginia, and assuming Palmer penmanship was taught there. My father was left handed; I wonder if she is also. Oddly, my handwriting has evolved to appear eerily similar to my mother’s, though it tends to be small like my father's.

Aunt Tacks has given me much to think about, and I shall have to write her a letter to ask all the questions I have. I have questions that never occurred to me before. Now the link to my past, to the knowledge of me before I became aware of me, lies with my father's sister, the one who hand-writes letters just to me and slips them into a folded Christmas card.
Posted by Gullible at 2:35 AM