"Pfft!  They're all over Zimanga," says Marg.   "You'll see more birds than you can photograph at Zimanga!"

Marg made a lot of bird promises.   So many, in fact, that I began  to suspect Zimanga, with all its avian wonders, was the go-to excuse to distract my attention from the latest Unidentified Flying Objects that I wanted the whole safari to come to a halt so I could take a photo.    Photos, plural. 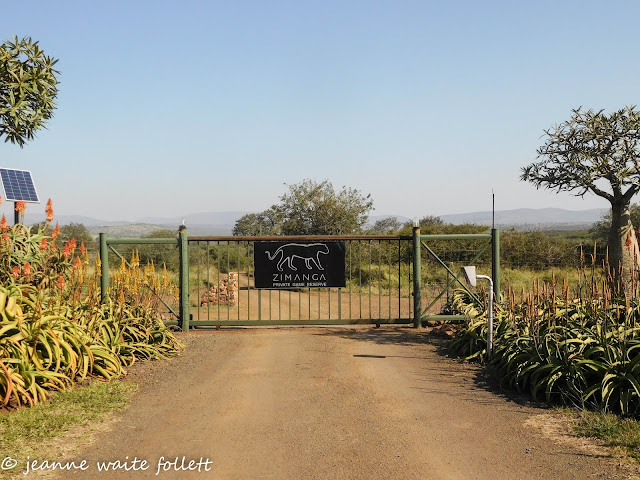 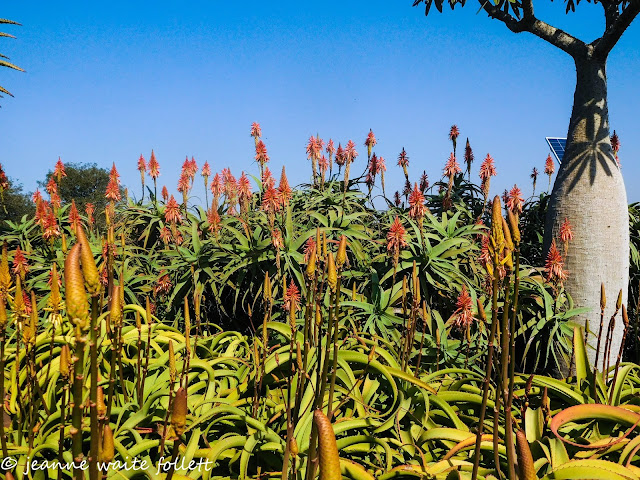 First, though, we have to wait for someone to open the gate and pick us up.   That takes a phone call and soon Margarite arrives in a safari vehicle, loads up our bags, and drives us into the Zimanga Private Game Reserve.

Not until we reach the turn into the new lodge do I see a bird.   It's the ever-lovely lilac-breasted roller.   Turns out, we will see this bird perched on this branch almost every time we pass by this spot. 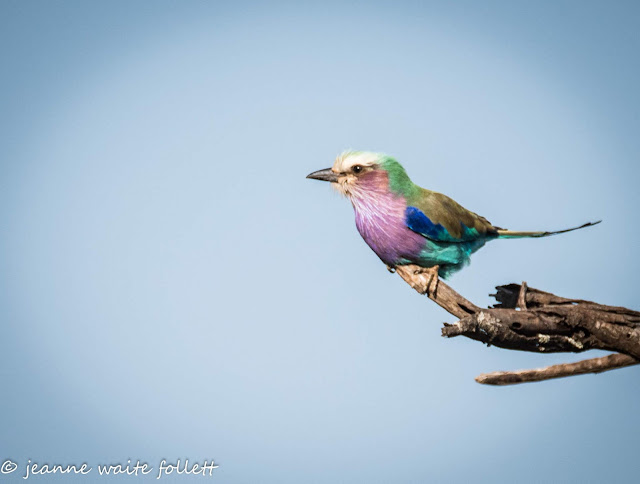 The new lodge is ultra-modern. 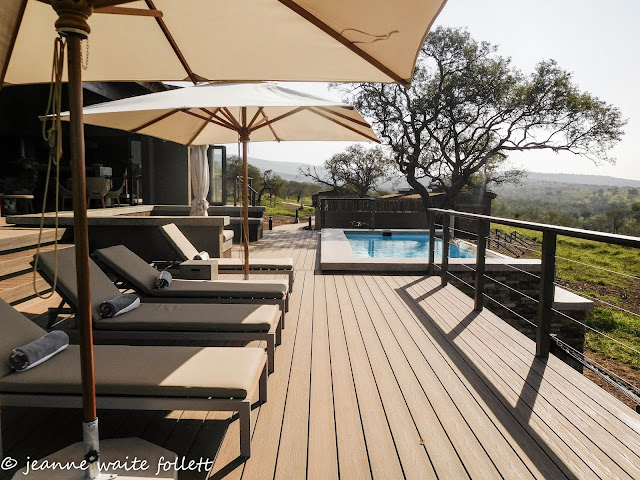 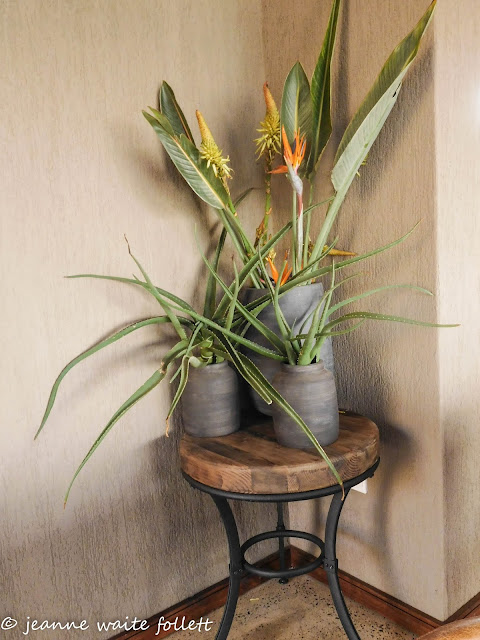 I am almost certain that I took photos of the interior of the mansions, but I cannot find those photos anywhere.   Holly and I were to share one, but stuff happened and the staff arranged for me to have a private room in one of the buildings closer to where Marg was.    These smaller rooms were set aside for guides traveling with groups.


I was completely happy with my room.   It had everything I needed.

In the mansions (as I call them because they are huge and fancy), were an entry with a wall of closets and drawers.


Then, a very large bedroom area (all open with no doors or walls in between) and large area at the foot of the bed with two desks on each side of the room.


In the adjacent bathroom area (again, no walls) there were two sinks inset into a large counter, a small room containing a toilet, and a shower stall that was glass on one side and provided a view--floor to ceiling--of the surrounding bushveld so that the impala and rhinos and hyenas could see you bathe in all your nakedness.

The shower had no shower curtain or privacy screen, which was awkward but "deal-able" for Holly and me.    However, if Holly, who had the bed closest to the bath area, were in bed, the shower was clearly visible.    As I said, just awkward for two women who had just met a bit more than a week ago.

As for my room, it was at the far end of the walk and in a duplex.   It was a perfectly acceptable room and its much smaller size made it easier for me to keep all my stuff reasonably under control.

After lunch, and time to settle in, we went out on our only driving safari.   The rest of our time would be spent in the world famous, award-winning game/bird hides for which Zimanga is famous.

Due to scheduling problems,  we would not have the vehicle to ourselves so that we could shoot from either side.   Instead, a married couple and a single man were with us, and that filled all the seats.   Unlike most camps, where a guide was responsible for only one group, Margarite was responsible for three different groups, ifs we count the single man a  "group".

This made perfect sense from the perception of management, in that it maximized the duties of the guide.   Keep in mind, rather than on actual several hour long game drives, guests at Zimanga were most often in one of several hides.   That meant the guide took the guests to the hide and then picked them up several hours later.

This schedule had its good points and bad points.   At first, we felt rushed, always in a hurry to get here and there, as she dropped off or picked up the others from various hides.  Later on we would learn what her other duties were and came to understand why we felt the way we did.

We missed Amy and Zuka Lodge.   We missed her enthusiasm.   We missed the laid-back, very efficient Phinda Lodge that we thought was exceptional.   We admitted that we had been spoiled there, and that this was a different kind of adventure.  We all recognized that there was no point in having a Zimanga guide sit with us in a hide for hours every day.

Still.   It's a difficult transition.

Leaving the lodge, we didn't go far before we saw a tawny eagle.    They are all over the place, and in many color variations from this light-colored one, to brown all over. 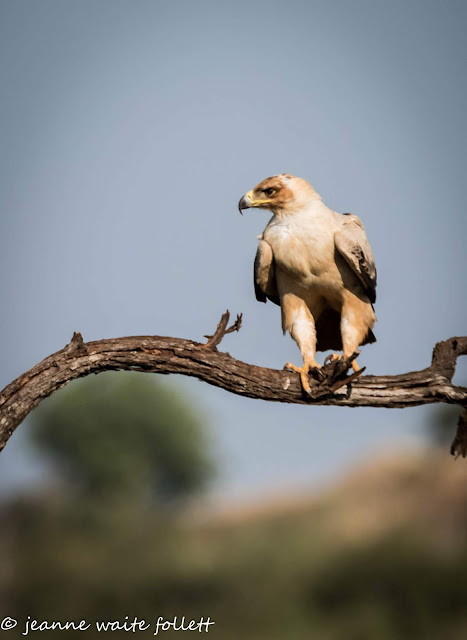 Then, a Southern yellow-billed hornbill.   A guide I had on my first trip to Africa told a story about his dad.   He asked his dad why the birds had bills like that.

"Makes them easier to turn over on the grill," said his dad. 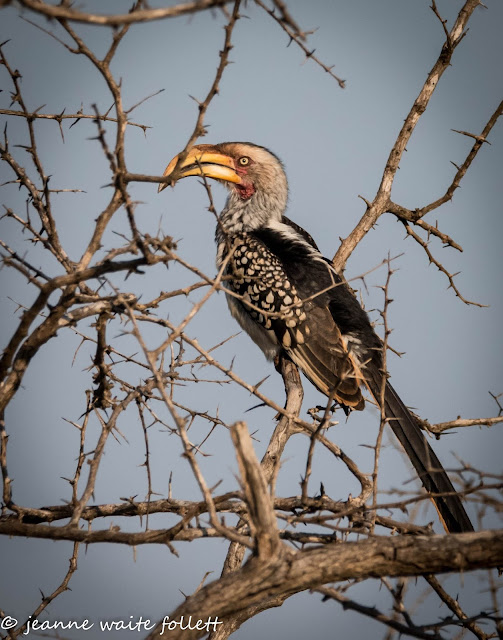 You thought elephants were gray, right?     And this elephant obviously is red.

Elephants frequently roll in mud and dirt, thus taking on the color of the local dirt.   This soil is called laterite, and is rich in  iron and aluminum from rainfalls over the ages. 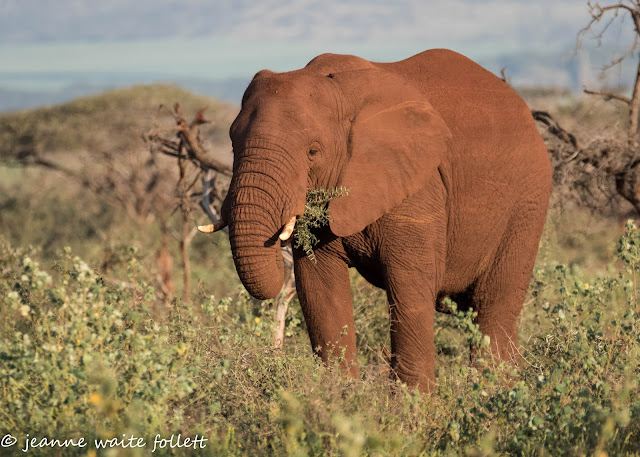 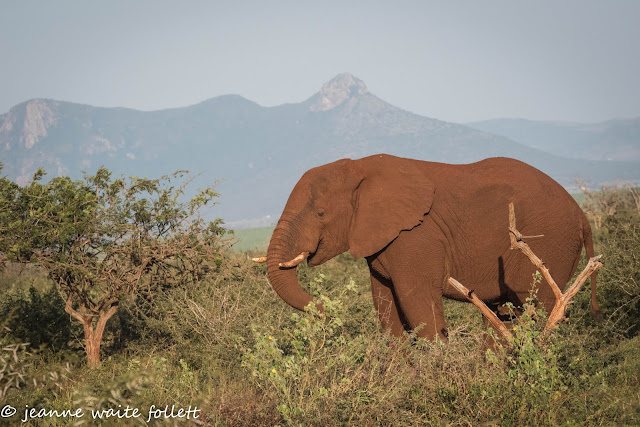 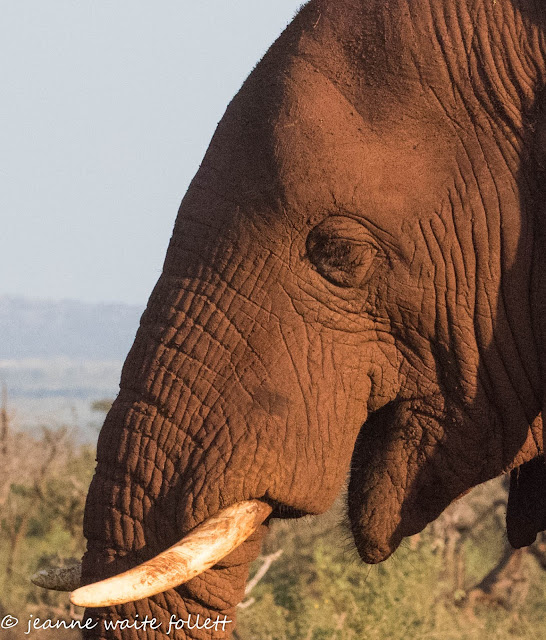 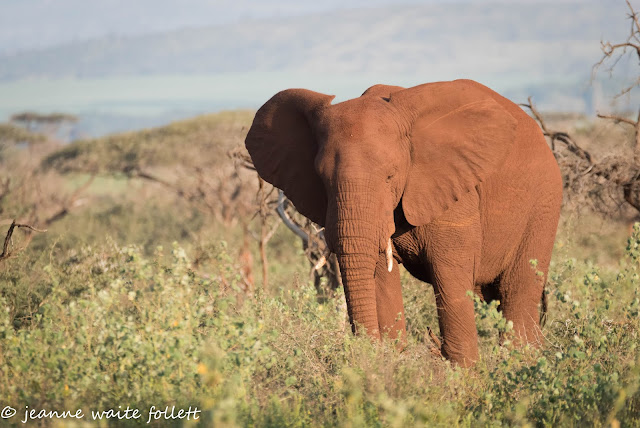 We saw two secretary birds on top of a far away tree, and tried to get closer, but they flew away.  This Maribou stork was close enough to grab a photo of with my long lens. 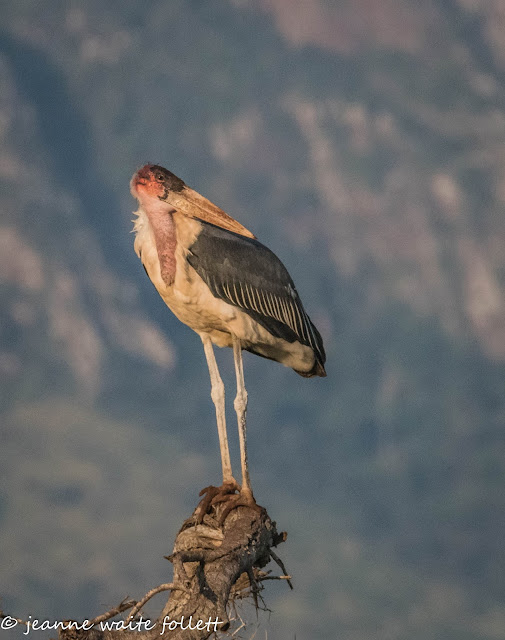 Then, we came to the lions.   Two adult males were sleeping off a huge meal of zebra.   It was apparent they were going to remain there for some time, so we drove back a short way to the lagoon itself.   In the below photo, you can see the lagoon at the top left of the photo. 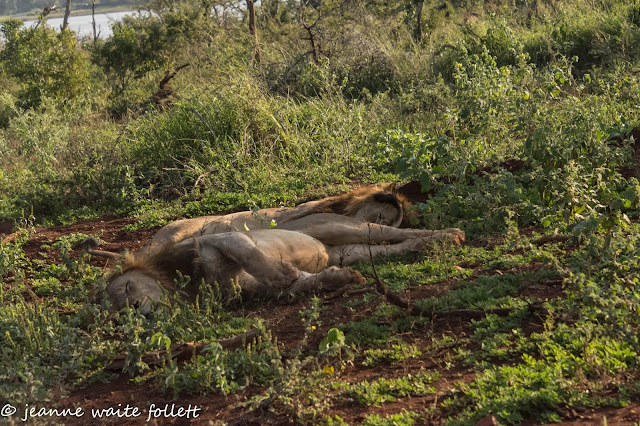 While everyone was photographing the crocodiles on the beach, I was focusing in on this little bird.

The photo is highly cropped, but it's a bird.   This very common shorebird is a plover. 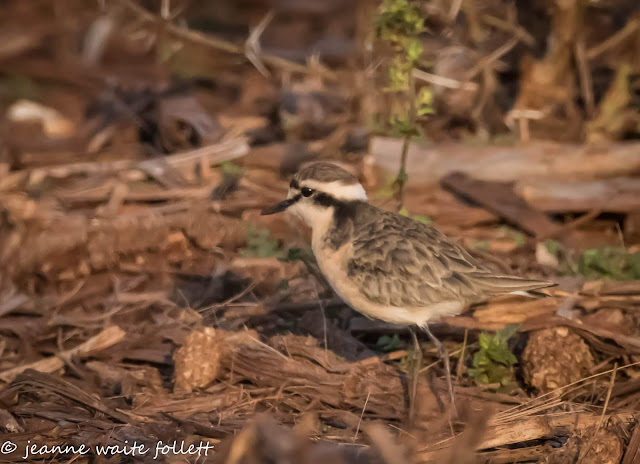 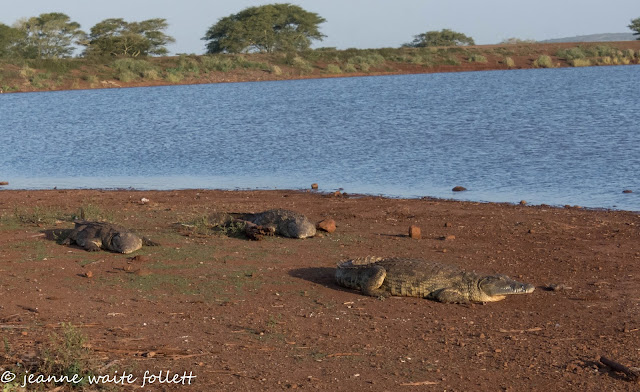 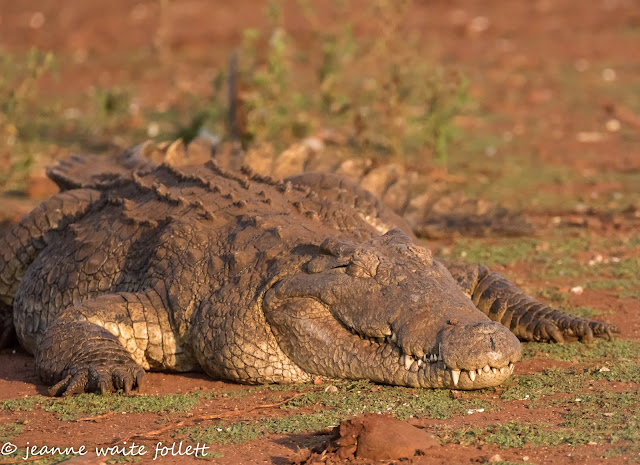 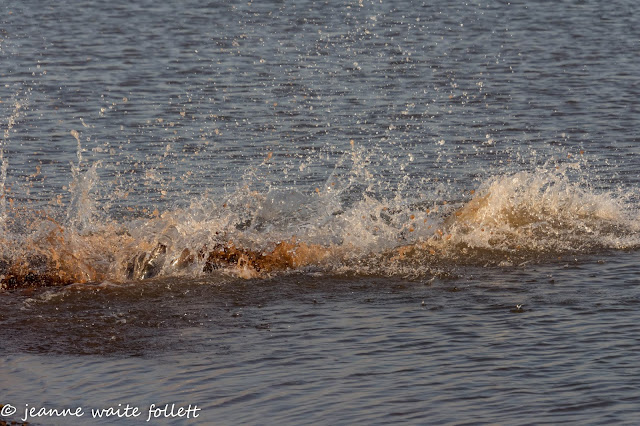 Nearby were a bunch of camera-shy vervet monkeys.   It took a while to get some photos of them, and not until we saw some in trees. 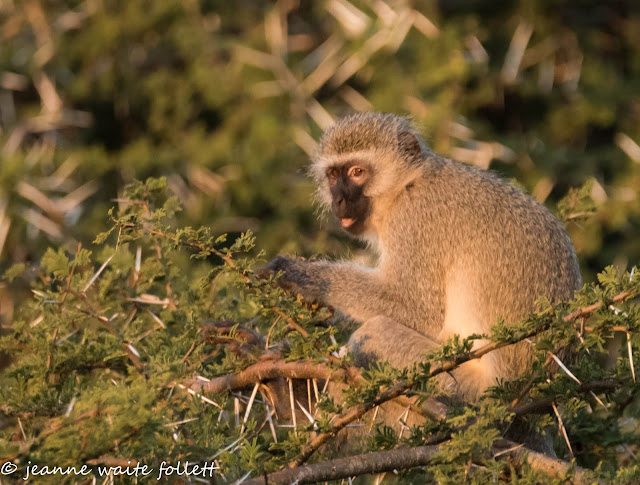 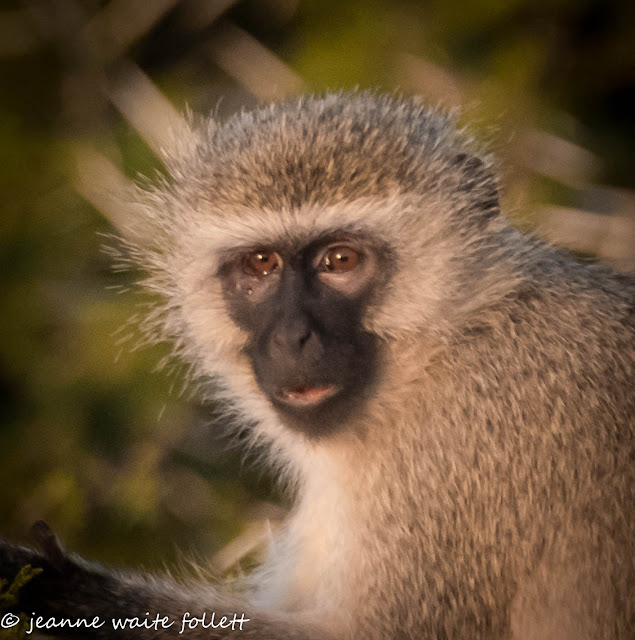 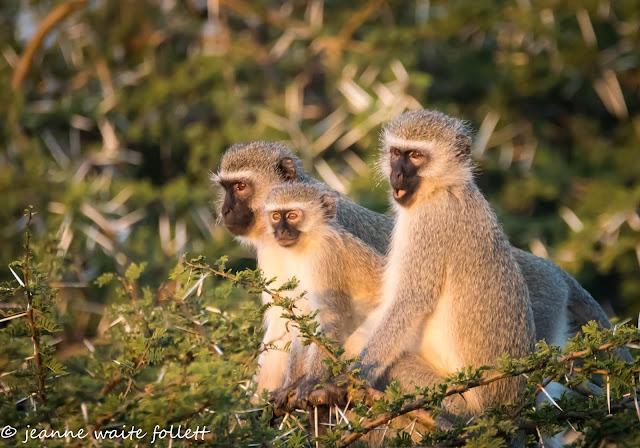 The lion's zebra carcass was nearby, and probably of interest to these hooded vultures. 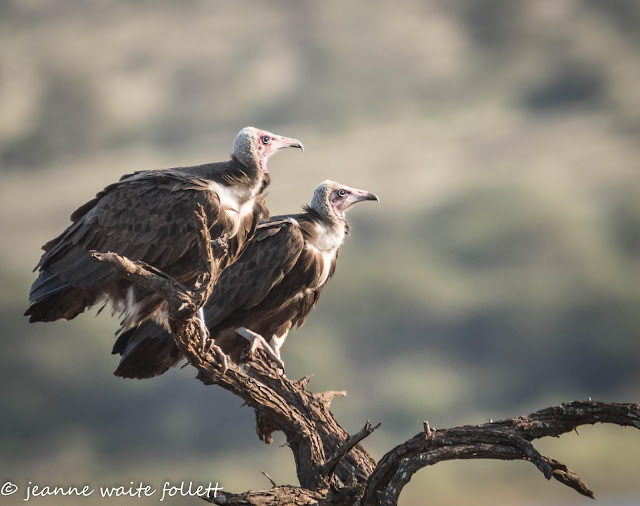 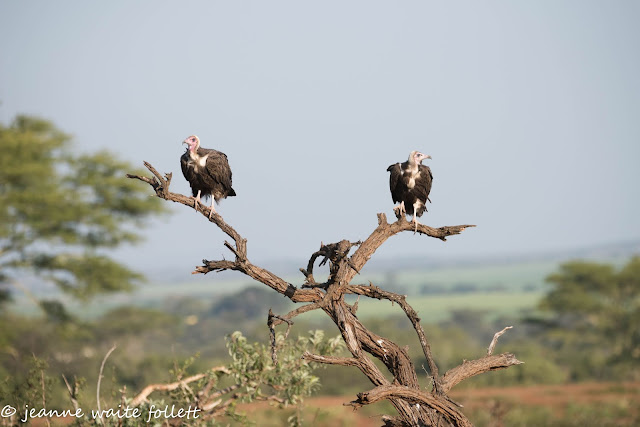 Here comes an Egyptian goose for a landing. 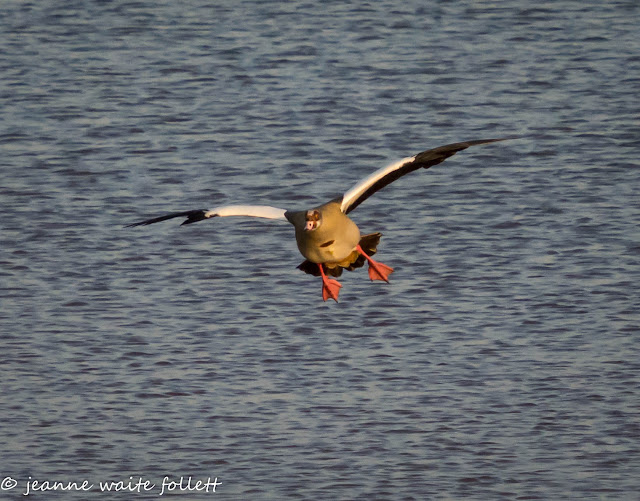 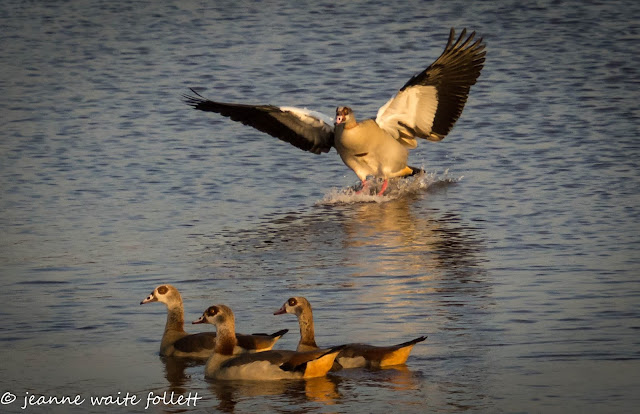 We went back to see if the lions were awake. 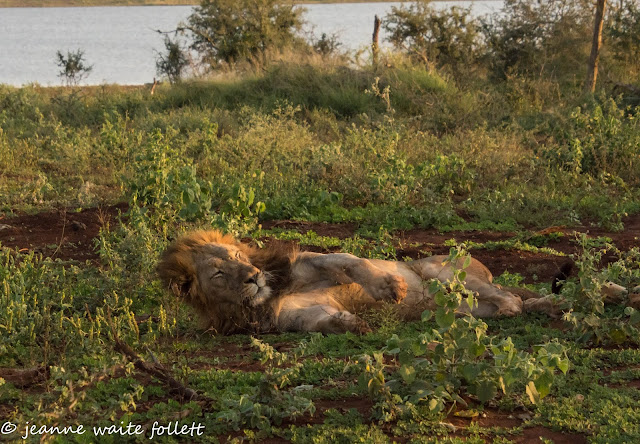 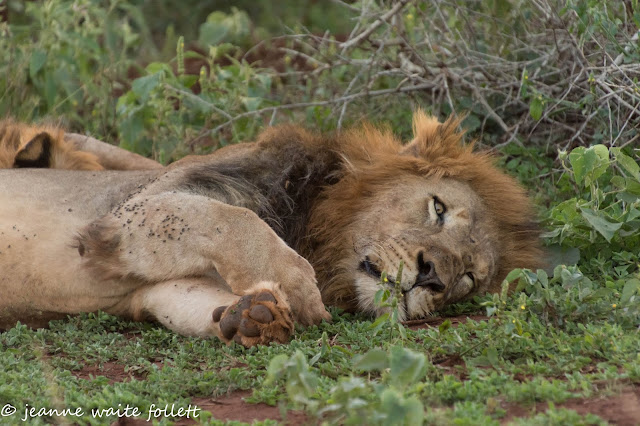 And found out how very, very, utterly regrettable it can be to waken sleeping lions. 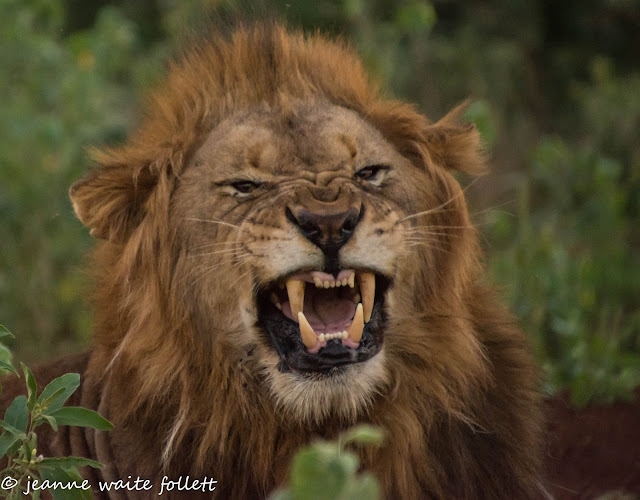