Holly sees them first.  She's sitting in one of the raised rows of seats in the safari vehicle, much like in the photo below, which was taken at another time.


From his catbird seat out in front of the vehicle, Telusi trains his binoculars on some spots a long distance away and says, "Lions."    And away we go.  This particular pride hasn't been seen in this area for some time and Amy is excited. 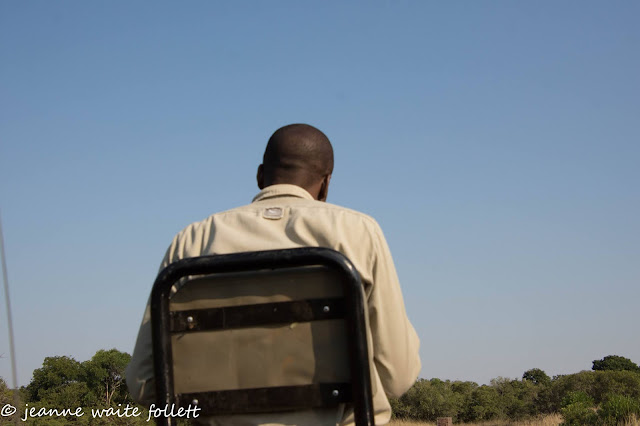 We drive around a water hole and off into the brush, circling around the lions to approach them with the sun at our backs.   The youngsters scatter, hiding in deep thickets.

Amy holds us back at a distance until she's sure the lions are okay with our approach.   Just before we get into position to shoot, a sub-adult female climbs a tree that's in front of the pride. 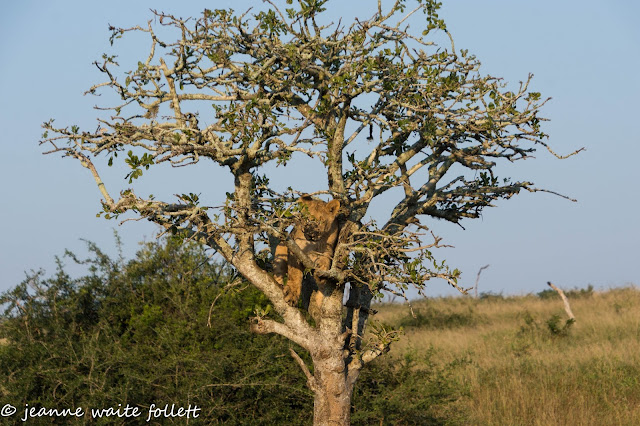 Climbing trees has not been usual lion behavior, except these days more and more reports of lions in trees are being reported. 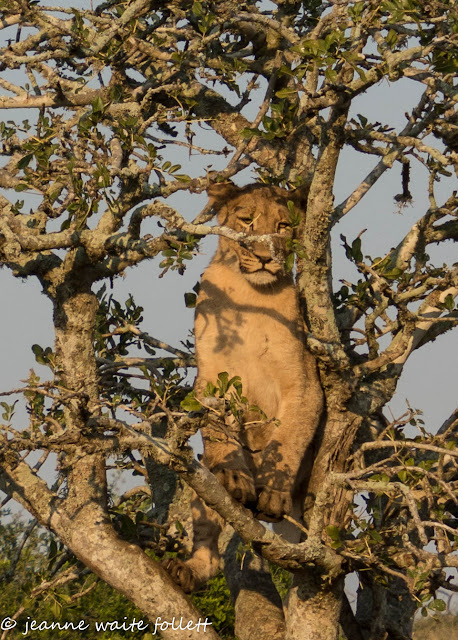 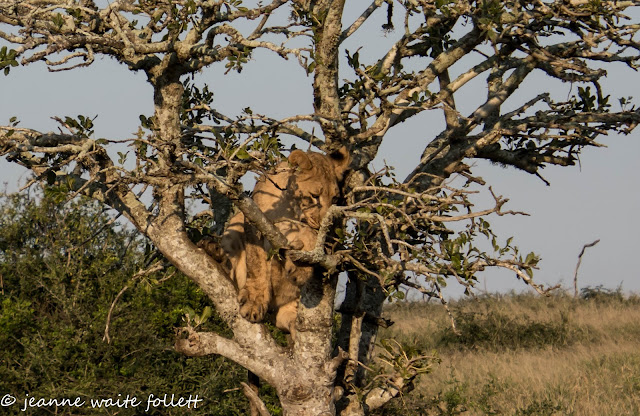 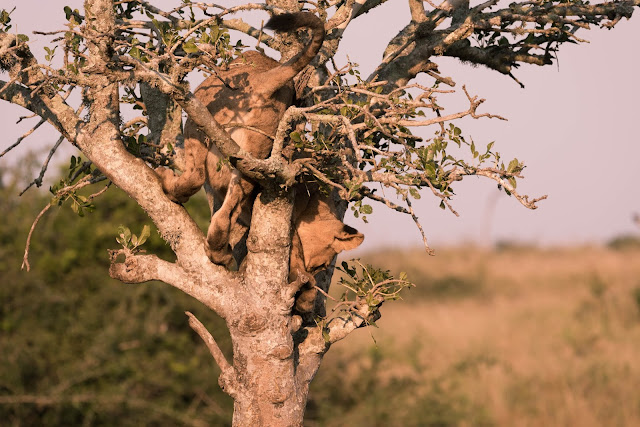 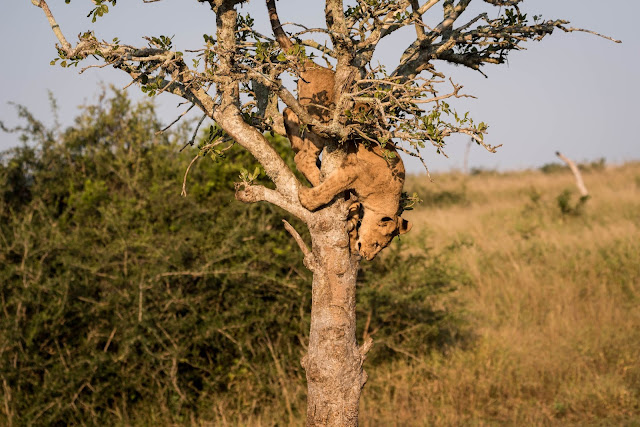 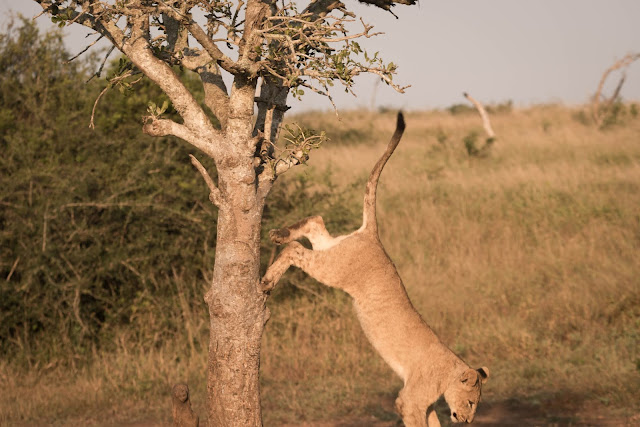 Once out of the tree, she rejoins the pride.    Most of the cubs remain hidden, except for these few.   Eventually, they too decide to go into the bushes and that means passing by the male. 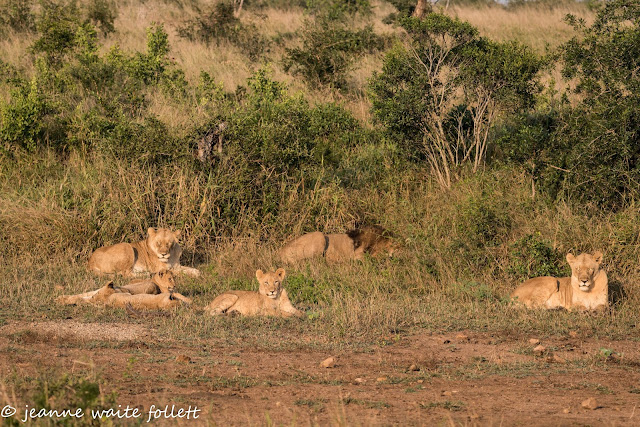 He does not appreciate having his nap disturbed. 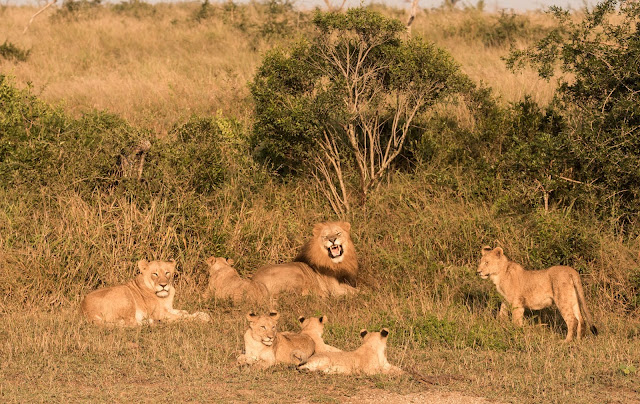 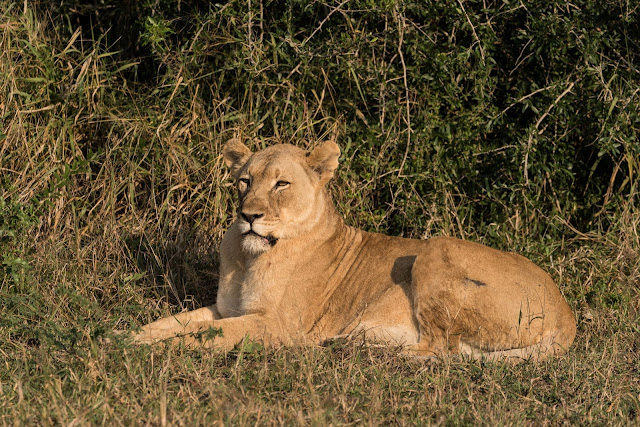 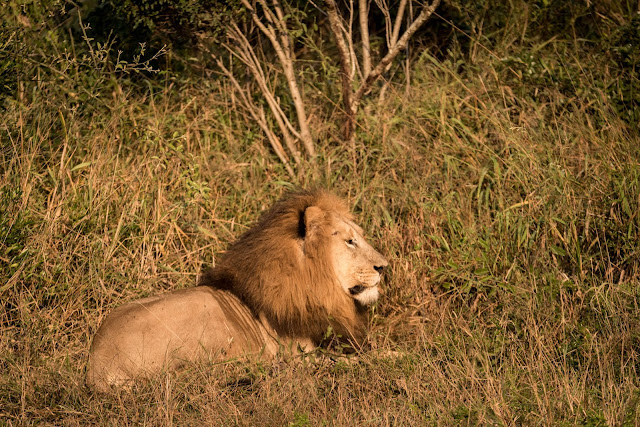 One by one, each of the three cubs makes the passage.   It is the nature of the big cats to greet each other by nuzzling, but they usually don't get this reaction. 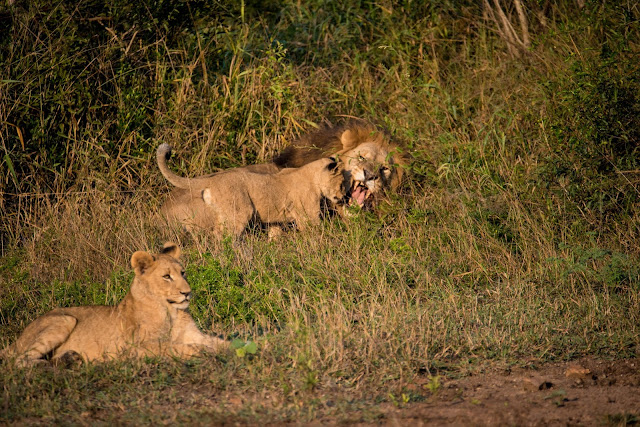 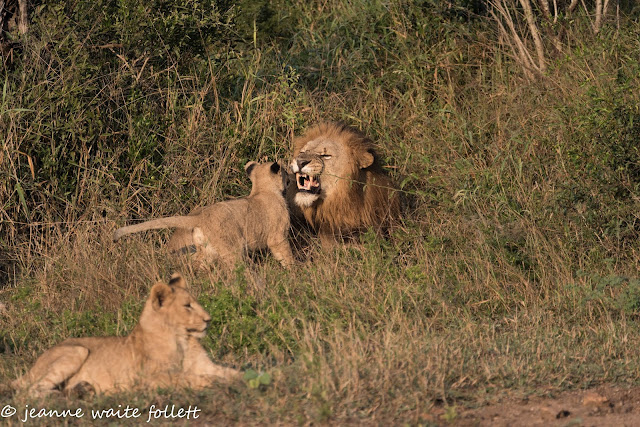 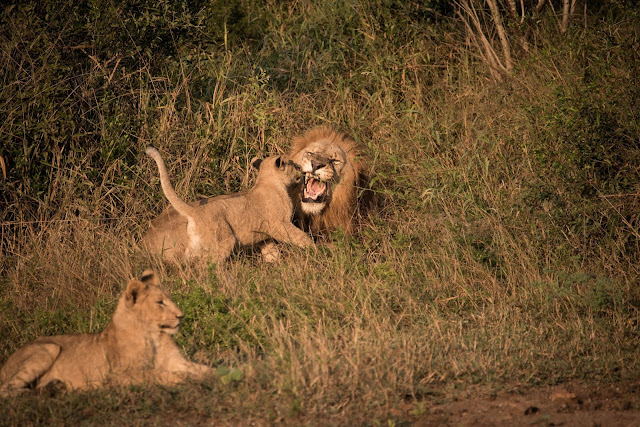 The third cub has learned from the other two, and passes the lion on its back side. 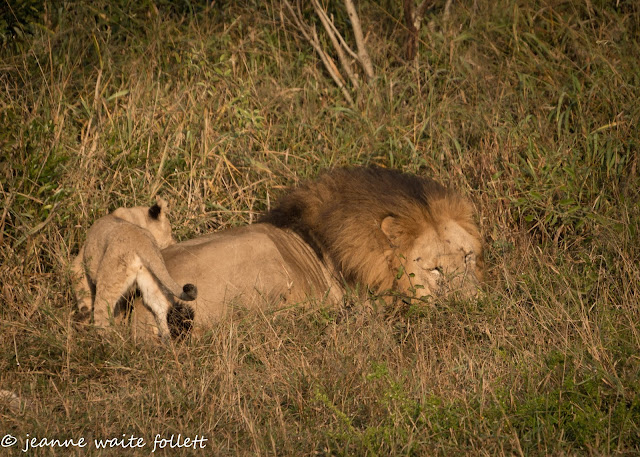 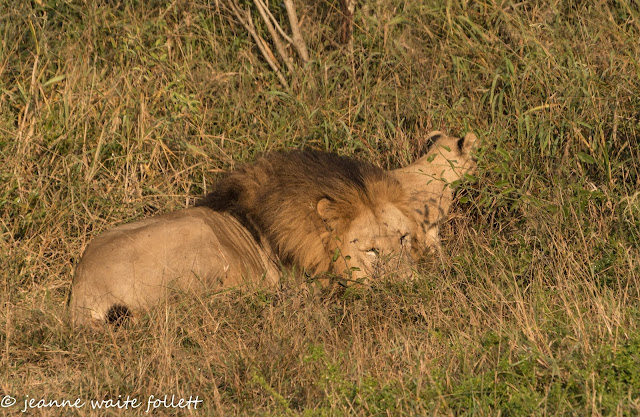 With the adults sound asleep and the cubs hiding in the brush, we move away to find more wildlife.


This is our last afternoon safari at Phinda.   One brief safari in the early morning, and we will leave this wonderful place for another game reserve farther south.

In this photo from our sundowners's break, you can see how the safari vehicles have raised seating.   Photographers aim to have an entire row for themselves so they can switch from side to side according to where the game is.

The camps, on the other hand, see this as lost income because the seats aren't filled, so photographers pay extra for the privilege, and hold it dear.

Back at the lodge, we enjoy a delicious dinner.   We invited Telusi, along with Amy and Sade, to join us.   Telusi is nervous about having dinner with six women.   He dresses in his best clothes and we all try to make him feel welcome.   Still, he sits at the far end of the table. 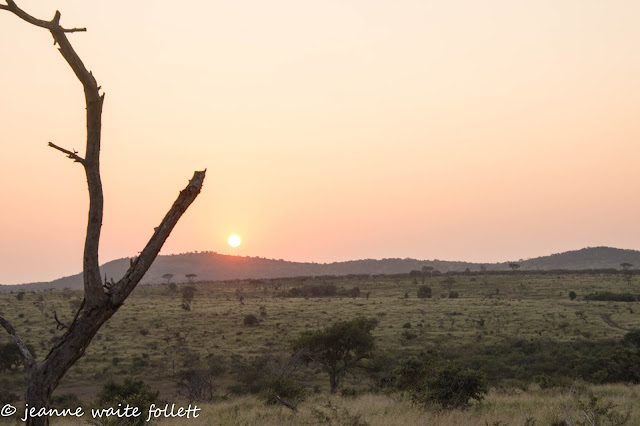 Early the next morning, we off on our final safari at Phinda and head for a visit with the leopard and her two three-month-old cubs, the ones we call Amy's grandchildren.. 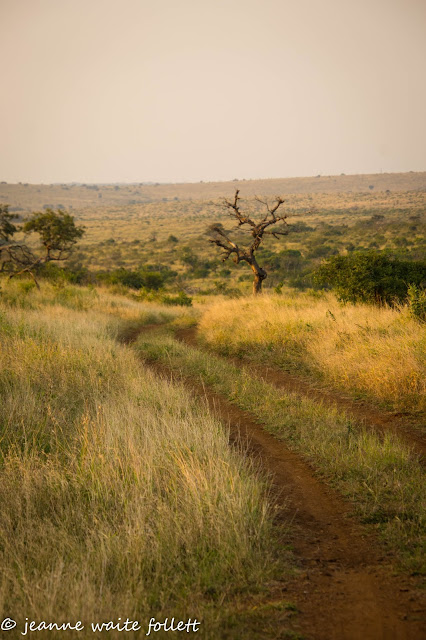 Once again, the little cub called Heidi is nowhere to be seen.   The other cub, now becoming more habituated to the tourists, puts on quite a show while sitting with its mom. 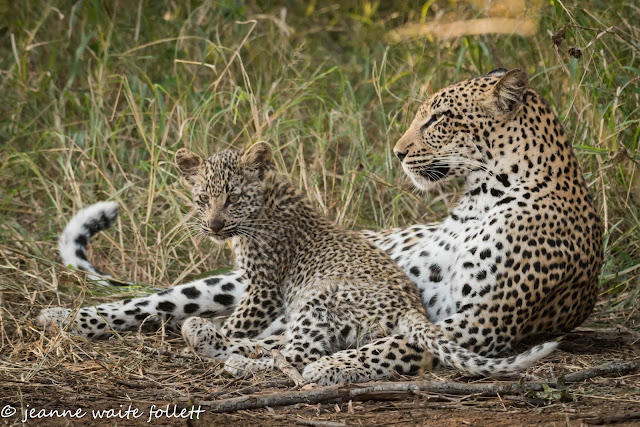 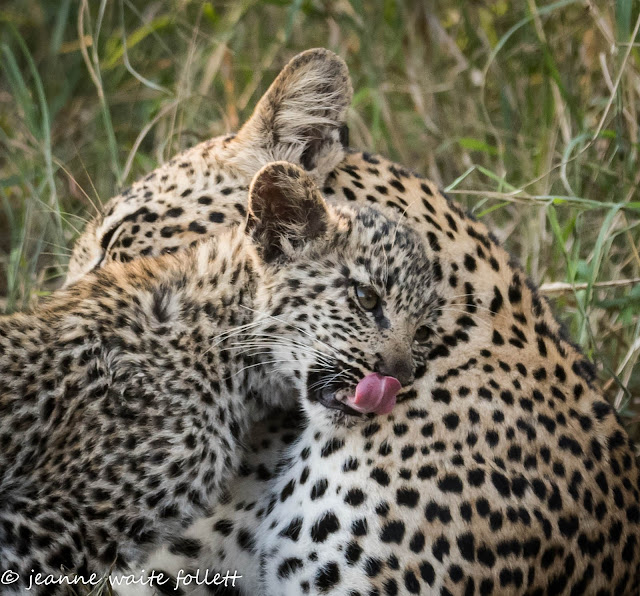 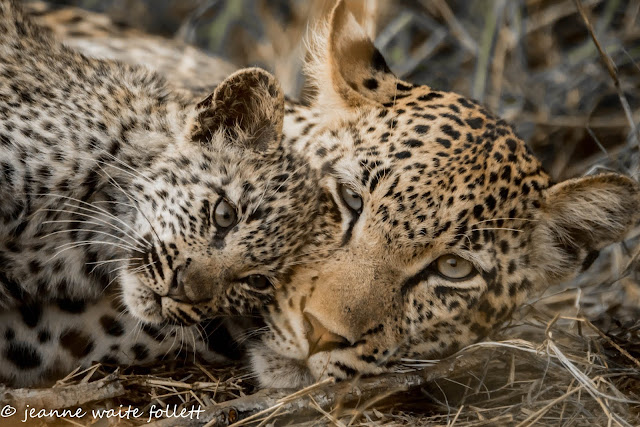 We find the lion pride from yesterday, but the adults are hunting and the youngsters are in deep grass.   We stay with them for a while, but opportunities for good shots are impossible. 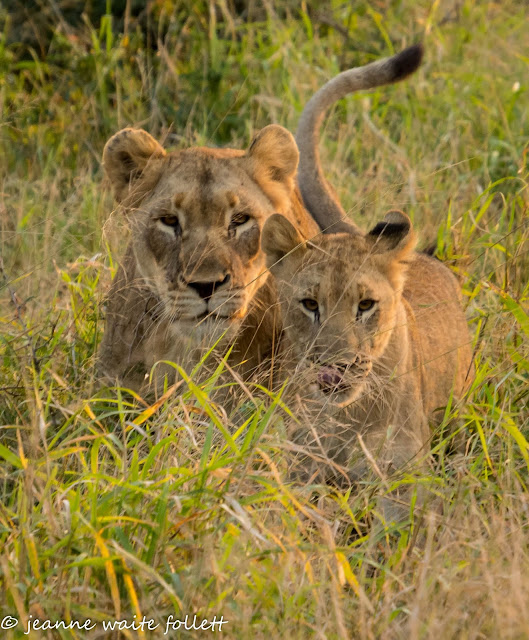 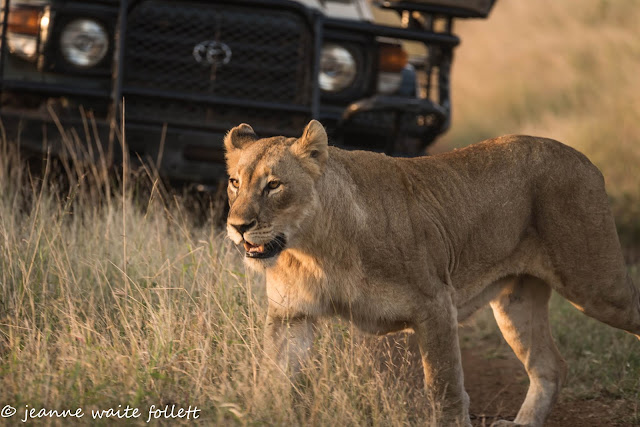 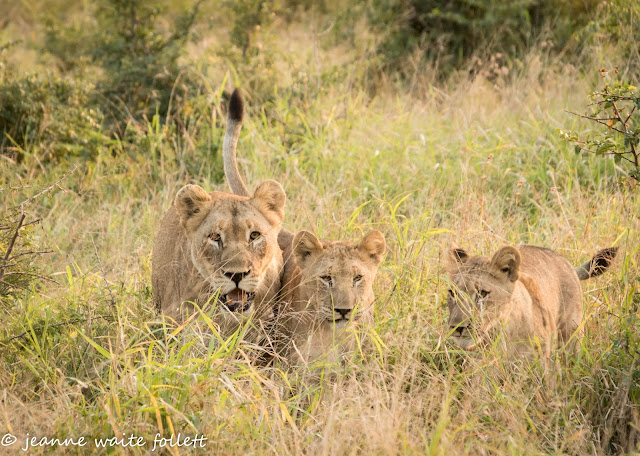 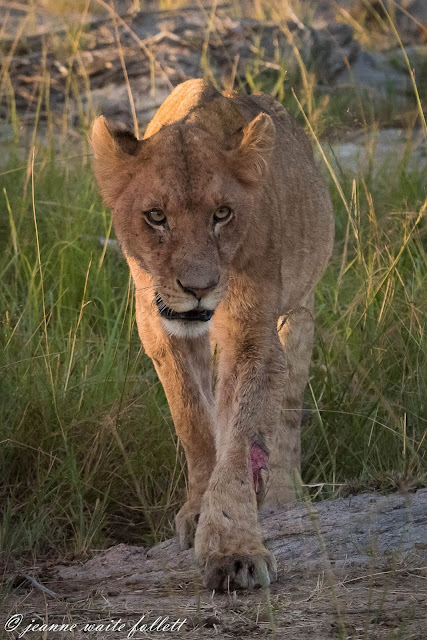 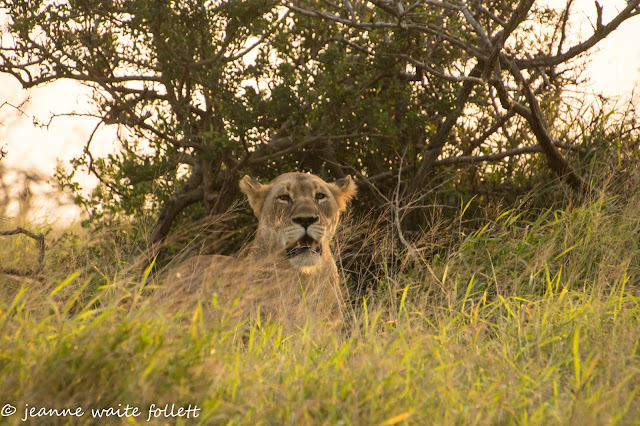 All too soon, we're back at Zuka Lodge for breakfast.   We'd packed the night before and only need to put the cameras away for safe travels.

And then, we reluctantly get into this little SUV and leave Phinda.

The only things keeping us from total rebellion and refusing to leave are the fact that new guests are coming, and our next place promises adventures of a different kind.


A couplehours from now, we will arrive at Zimanga Private Game Reserve, already missing Zuka Lodge, Amy, and the shortbread cookies.