Four women sit facing a wall in a darkened underground bunker.  In front of them is a narrow opening, through which they can see if danger approaches.

Their weapons of choice—mounted on tripods for steadiness and perfect targeting—are loaded, aimed, and sighted in.   They are ready and waiting with great anticipation, here in the heartland of the Zulu kingdom now known as Kwazulu Natal. 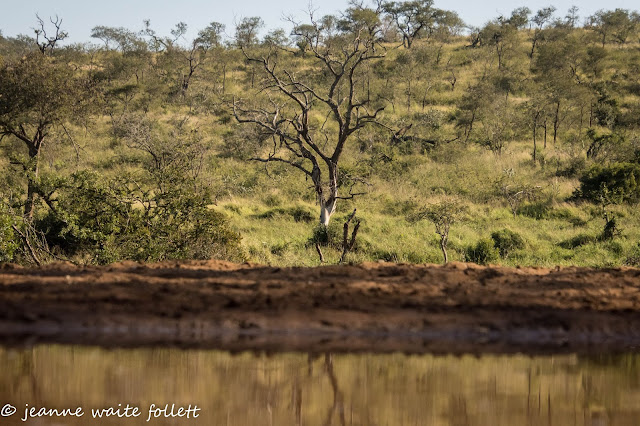 Immediately behind them is a black curtain, and behind that are four low bunk beds that offer respite from the waiting, should any of them feel the need of a break from the eternal waiting.

A large, heavy, wooden door in the chamber opens onto an efficiency kitchen—a mini-fridge, a microwave, and a sink.  There is sufficient food to sustain the waiting women for the duration.   There is a counter opposite for computers and external hard drives, a bathroom, and a small area for camera cases, overnight bags, and so on.

They have been here since mid-afternoon.  Just before they descended into the bunker, a very large giraffe left the area.   Perhaps it was disturbed by their arrival; perhaps it, too, knew what might come to upset the tranquility of the night. 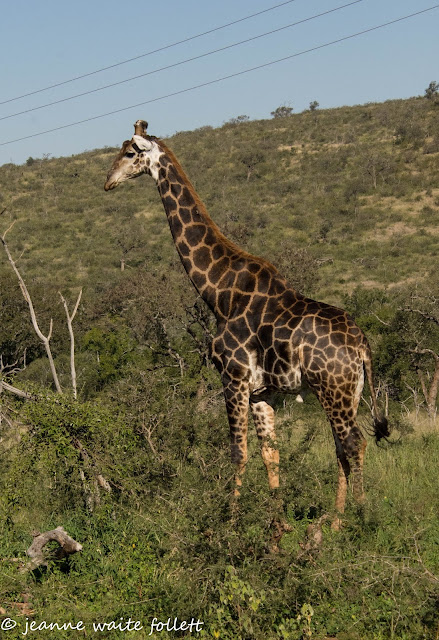 As darkness rises from land and blots out the bushveld and then the sky, a hand reaches out, toggles a switch, and a two weak beams of light faintly illuminate the waterhole outside the bunker.  Now, the women become more anxious. 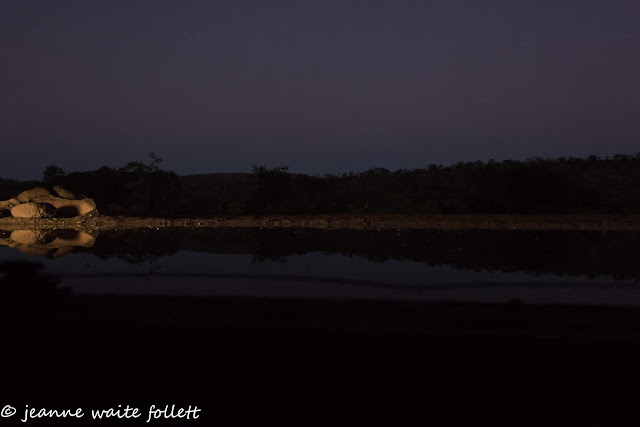 They finger the levers on their weapons, take practice shots in the diminished visibility.  And they wait.

Wait.   For the beasts of Africa to emerge from the black night.

The first appears as a silver wraith, entering stage left.   It circles and faces the women head on.   The women are now six feet from one of the most  fearsome beasts in all of Africa. 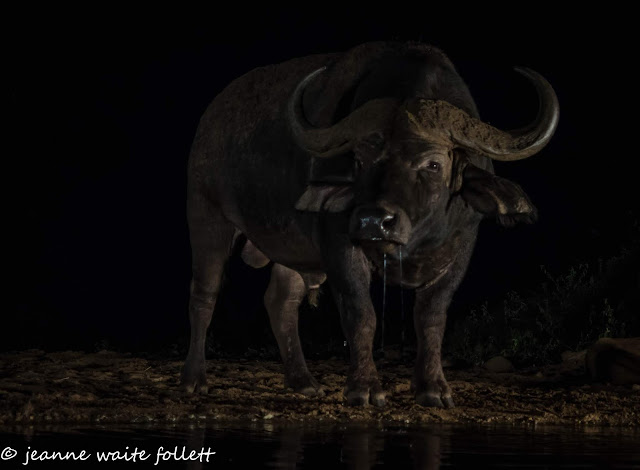 Brrrrrrrpppppppp.   The staccato sounds of cameras taking multiple pictures a second erupts from the women’s weapons, Nikons all.

Before them is the massive Cape buffalo.   Standing up to six feet at the shoulder and weighing up to 1750 lbs., the unpredictable buffalo are said to kill about 200 people each year. 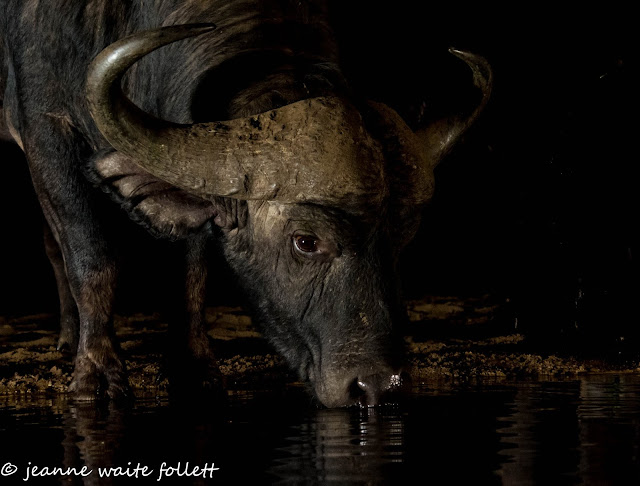 The beast is joined by several more.   They are lined up along the edge of the water, and though they are drinking from the pool, the water is barely disturbed, providing perfect reflections. 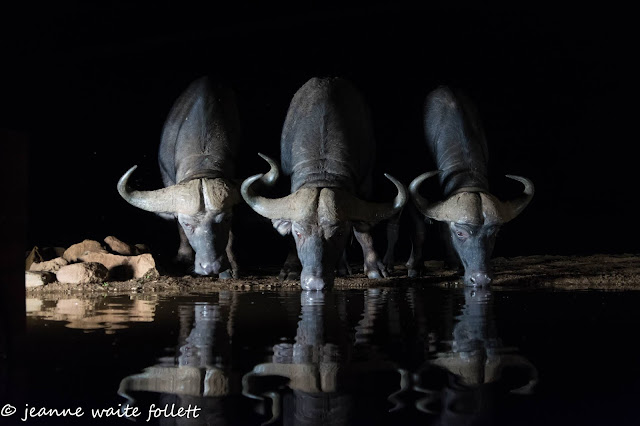 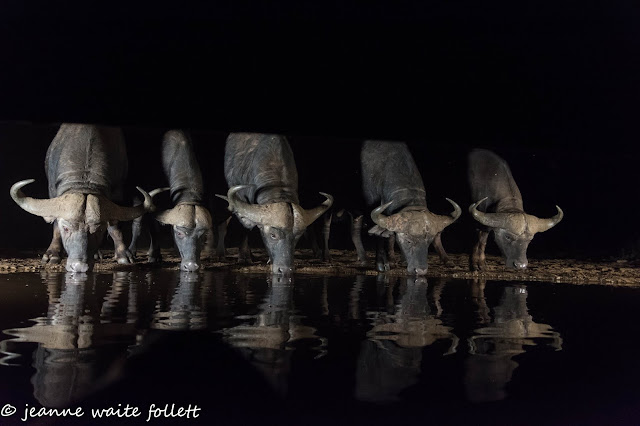 Thousands of images are imprinted on memory cards; clusters of neurons fire at once and store the images in the memory cells of the women. 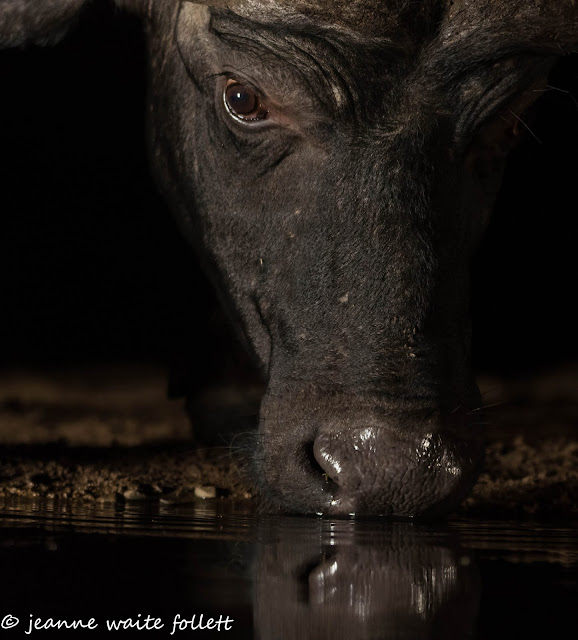 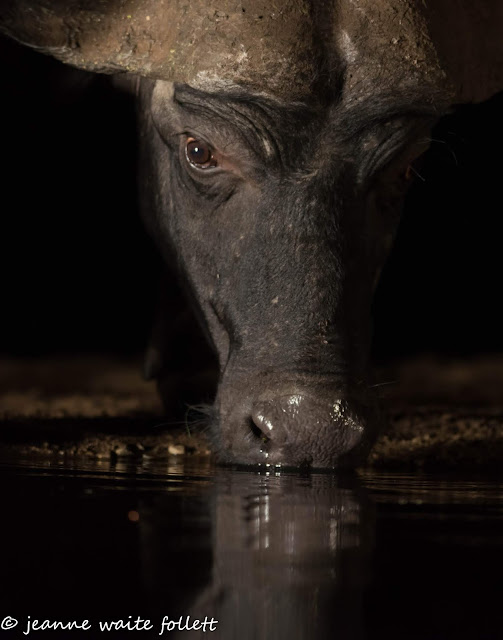 Then, as silently and wraith-like as they appeared, the buffalo fade into the blackness. 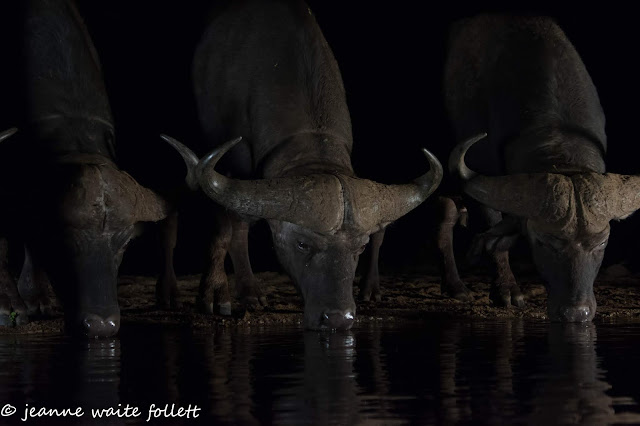 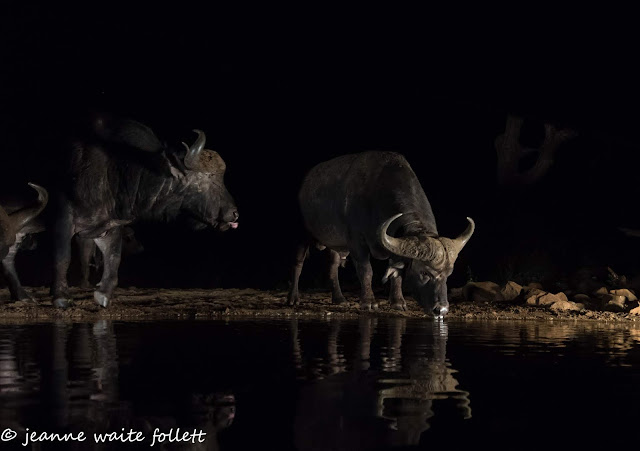 And the women wait.

A field mouse scurries about just short of full visibility before it finally approaches the water to drink.    Again, the Nikons fire and the women joke about big game photography in darkest Africa.


This tiny creature braved owls and hawks and other nocturnal predators to drink at the waterhole.   It also entertained four women for hours.


Some of the women take naps; others wait before the narrow window, hoping for lions or leopards or the tall giraffe they saw earlier.

Nothing else appears.   This land has been blessed with an abnormal amount of rain, so water is plentiful.   The animals need not come to the Umigodi overnight hide.

The women are reduced to photographing ants.

The birds arrive with the dawn. 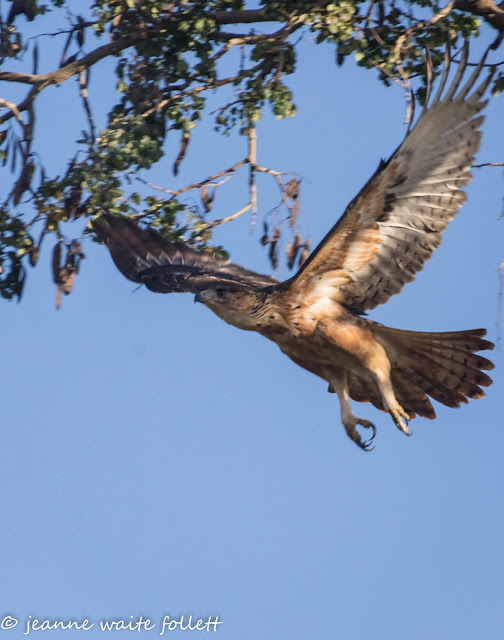 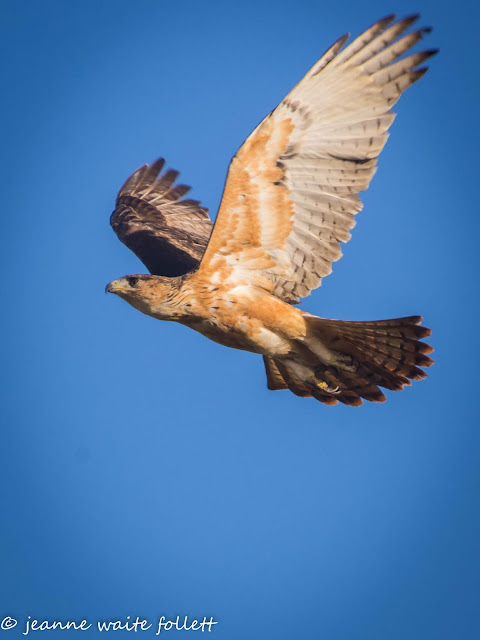 And then a warthog, red from rolling in the red dirt of South Africa. 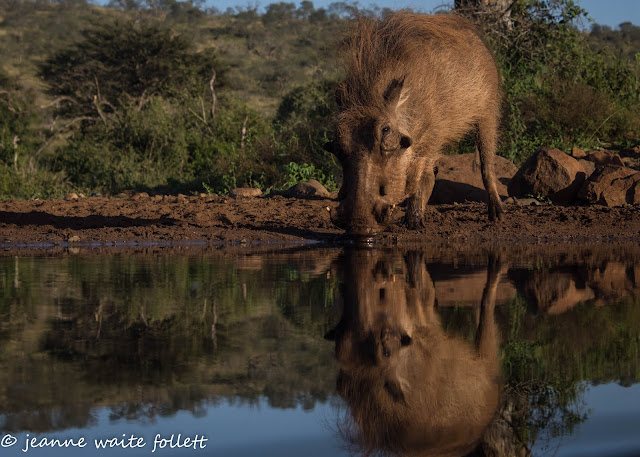 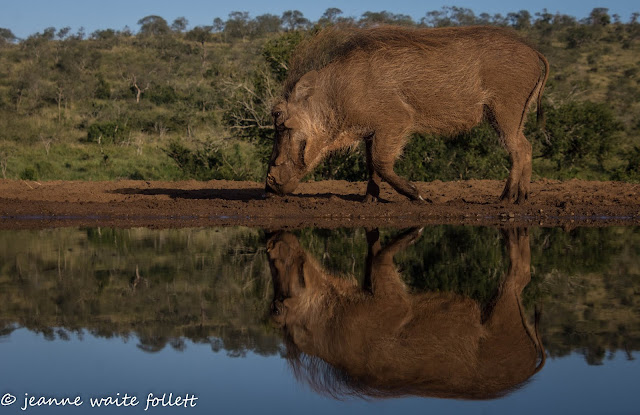 By 9 in the morning, the appointed time, the women are packed and ready to leave.

A knock, and the heavy door that protects the women from the night is unlocked.   The women ascend into the sunlight for the first time in 18 hours.

They return to the main lodge at Zimanga Private Game Refuge for breakfast.

This afternoon, the small bird hide is on their schedule,