With temperatures in the high twenties, I overdressed for a special photo shoot.   Why?   Because this photo shoot involved lying in new snow on ice and since I already have an age-related camera shake, I didn't want to add shivering to the problem.

I drove a short distance to my favorite place in Alaska, and paused as I crossed the one-lane wooden bridge over Dave's Creek.   Tern Lake is frozen, but its outlet at what becomes Dave's Creek is not.


There was not a ripple on the still water.   No ripples equates to no dippers looking for food.

Nonetheless, I parked the truck, grabbed all my camera gear, and walked over to the viewing platform, still hopeful.


No Dipper.   No mergansers, either.    I started downstream.   As soon as I crossed over the gravel road, Dipper saw me and headed upstream to our meeting place.   He was 30 seconds late for our appointment.

He paused a couple times along the way, looking back to make sure I was following.  Once on a snow-covered rock. 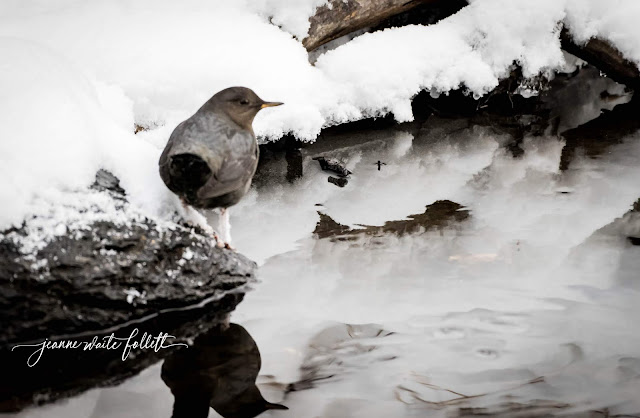 Now, old women who are overdressed-for-the-weather-but-just-right-for-lying-on-the-snow-and-ice-to-take-photos will slog through snow much slower than a dipper can glide through the air, so once again, Dipper waited for me, this time on a viewing platform support. 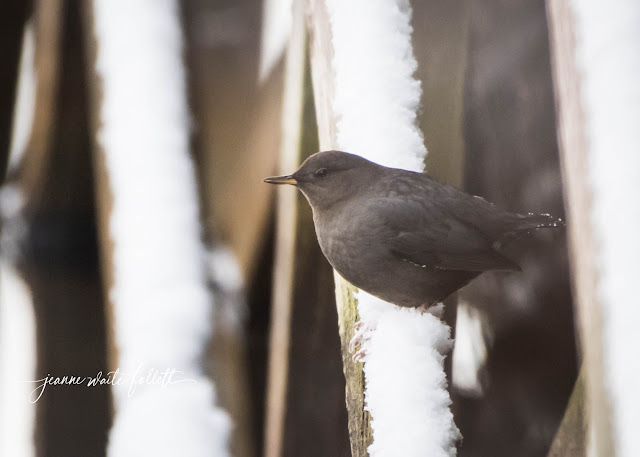 Now that we were together, the photo shoot began.   Dipper positioned himself on the wet ice next to open water, whereupon I commenced to over-expose every single photo, which is hard to do on an overcast winter day at Tern Lake where the sun won’t be high enough to shine over the south mountain until the middle of this month!


I was wearing gloves, which had nothing to do with blowing the exposure on the shots, but really, really makes back-button focus difficult.

If you don't know what back-button focus is:   The most normal way to focus a shot is to half-depress the shutter button, then click it all the way down once the subject is in focus.

In back-button focus, most DSLR cameras have the option of assigning another button on the back of the camera to take the place of half-depressing the shutter button.  This button is located about where your thumb would land while holding the camera.   When several people suggested this to me, I, as usual, was reluctant to change.   I had used this button to lock focus, and it felt awkward to me.

Finally, I listened to Marg Wood and tried it.   I've never looked back.

Rather than awkward, it actually helps me hold a heavy camera and lens. 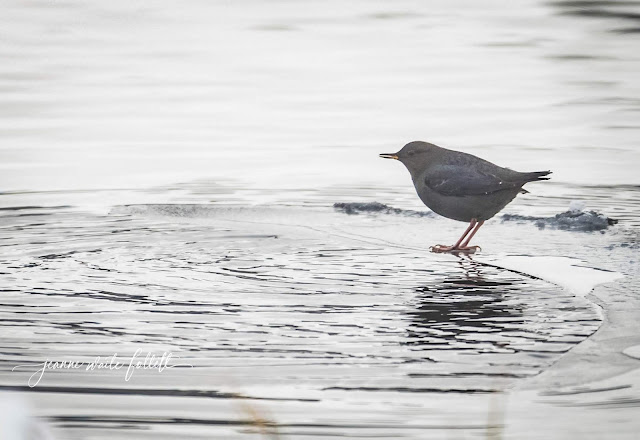 Back to the photo shoot.

We did the usual Dipper on Ice in a Triangle of Open Water to get some artsy-fartsy diagonals in the shot. 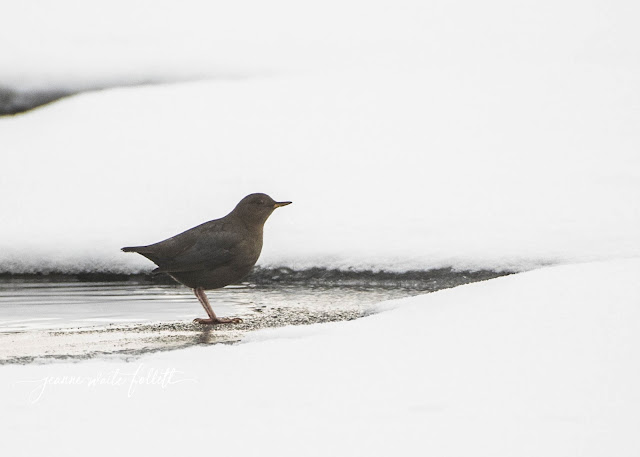 We did  Dipper Ready to Dive. It was here that I noticed Dipper's legs were encased in ice.   This is what happens when little birds are in and out of water all day long in freezing temperatures.  It doesn't seem to matter to them. 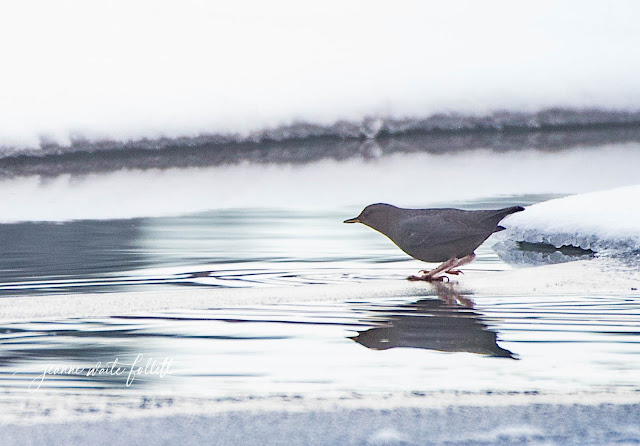 "Oh, dear. Dipper, I hope that ice doesn't weigh you down!"

"Not to worry," said Dipper--and took the plunge. 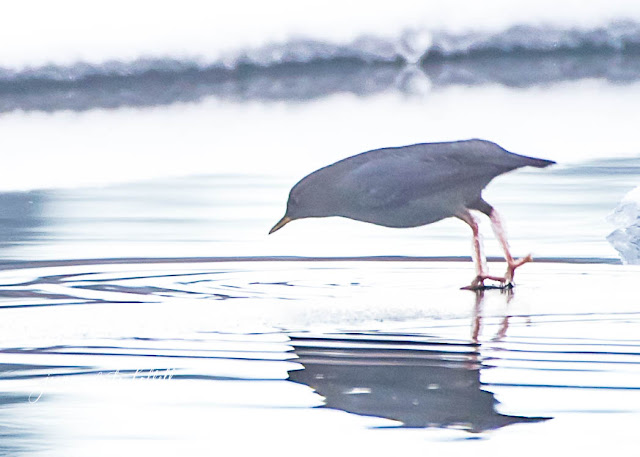 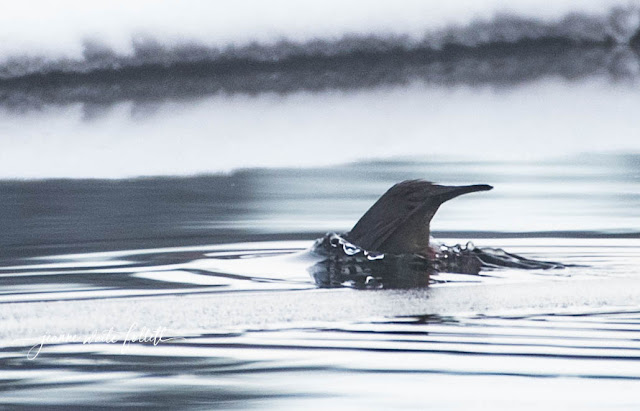 Then the obligatory "Dipper Sticking Its Head in the Water." This made my fingers hurt from the cold, even though I was wearing gloves. 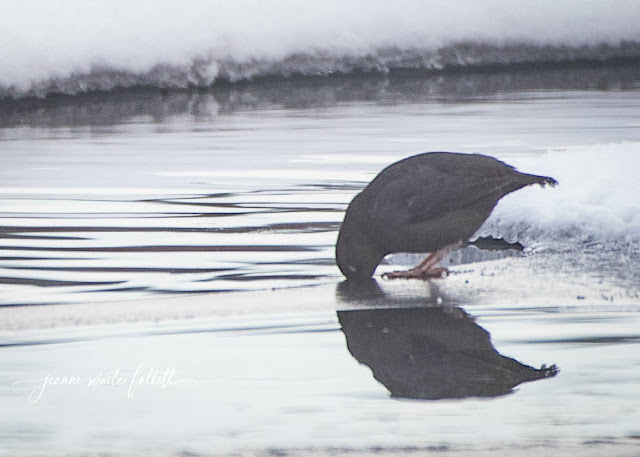 We progressed to  No Ice on Dipper's Legs shot and then.... 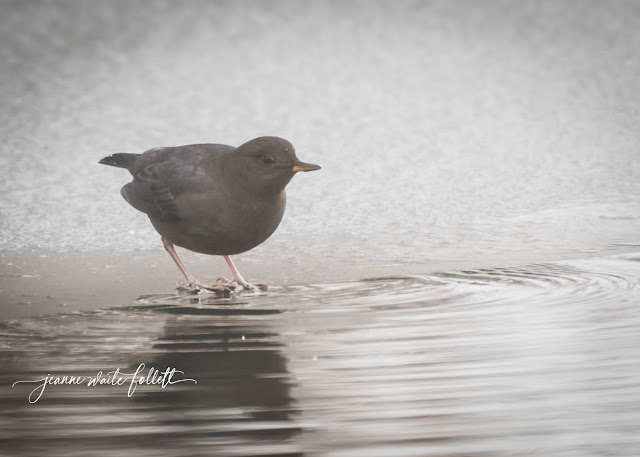 Dipper obliged that he was tired from dragging around all that ice on his legs and asked if he could be excused from the rest of the photo shoot.

"Of course, Dipper. I'm just glad you were able to melt off that ice by jumping into that freezing water. I’m rather tired myself, you know, because getting up from a prone position without sticking this new lens in the snow requires dexterity I no longer have.”


Whereupon Dipper flew downstream. Unfortunately for our hero, he met up with another dipper and that whole territorial thing ensued.

That's when I left. Watching dippers fight is not a pleasant thing to witness. Besides, the battle is all aerial and pretty quickly you loose track of which dipper you’re rooting for.

But, truth to tell, you love them all, so it’s best to just leave.