Weapons of mass mess and destruction....

Quickly now, before I change my mind and decide to spare myself the embarassment, I am posting these pictures to show what happens when the muse comes for an extended visit. As you can see, my loft is not bright yellow, as it appeared to be in previous pictures. 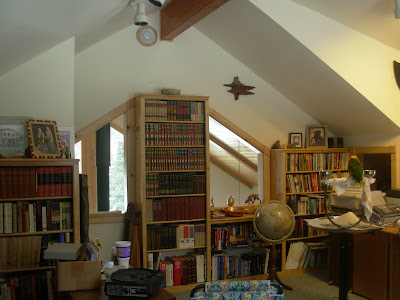 The two openings look out over the living room. The vertical black thing is the stovepipe from the wood stove down below. In the foreground sits the Kodak Carousel projector, still right where I'd used it a couple months ago to sort a ba-billion slides. 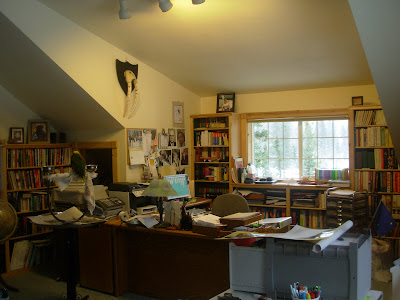 The above photo shows the command center in its usual state of perpetual disarray.
I call it "Katrina's Home Page," and I don't mean it fondly. Yes, that's a game of Spider Solitaire on the monitor. Medium difficulty, two suits of cards. Note Pablo's proximity to the command center. That makes it easier for him to spread feathers and sunflower seed hulls all over my desk. 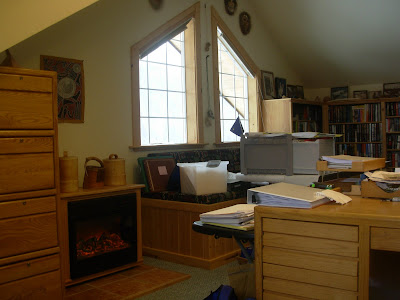 There is one spot that's relatively tidy: it's the Heat Surge electric heater I recently installed in place of a gas heater that wouldn't work in this location. Worked fine in the shop, but not here. I suspect it has something to do with it being vented under a four foot roof overhang. My theory is that the exhaust swirls around under the overhang, the sensor detects carbon monoxide, and the safety shuts off the gas valve.
On the heater's mantle--oh, yes, "made by the Amish," though I question why the Amish are making mantles for ELECTRIC heaters--are three birch bark baskets. Above that, waiting to be properly framed, is an authentic Aboriginal painting that covers the place in the wall where the gas heater stovepipe penetrated. The painting's design depicts a watering hole in Australia's Outback, and men hunting kangaroo. I bought it for $50 from a colorfully-dressed, barefoot Aboriginal woman in the Outback near Alice Springs. I still remember her eyes--bottomless and fathomless.
To the right, in front of the window seat, there is a folding table covered with the remnants of projects started and interrupted. The gray box is a portable filing drawer that contains most of the chapters for the Alzheimer's book-in-progress, as does the other plastic box on the window seat. On the rest of the table is a dry erase board that I've been using to diagram and structure a story I'm writing for the Mystery Wrting class I'm taking online. 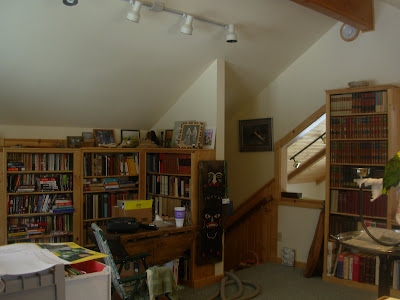 In the right center of this photo are the stairs that lead down to the rest of the house. Snaking up those stairs is the hose for the central vacuum system, dropped in place several days ago when I realized that a quick lick and a promise around Pablo's perch just wasn't going to cut it. 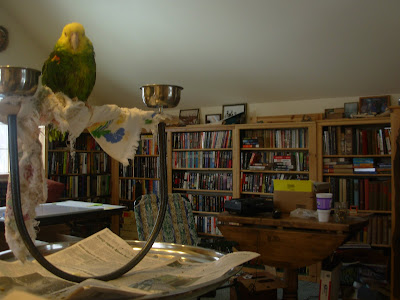 And here he is--the lord and master of the loft. Today he's in a good mood. He's recoved from the trauma of being placed in the stainless steel kitchen sink and given a shower. Even his battered feathers look nice. This is the peaceful, friendly version of Dr. Jekyll and Mr. Hyde. The towel is to provide more surface room for him to perch, as well as make the perch softer. He doesn't fall too often from this arrangement, but when he does, feathers and seeds go flying. The ragged thing hanging down from is perch is the previously-destroyed towel.
Parrots don't eat grit, and have no saliva. About half-way up that strong upper mandible is a spot almost like the underside of a shelf. When eating, they use the sharp lower mandible to slice, crush, and grind food against that tiny spot, which is why they make such a mess when eating nuts and the like. Pablo will leave a circle of "nutdust" around him. Oftentimes food will become impacted against that notch, and parrots will chew on things to "clean" it, things like the towel, peanut shells, napkins, wood, anything they can find. My husband used to give Pablo toothpicks.
Okay, I've bared it all. Enough stalling around. Back to cleaning up this mess. Hopefully by tomorrow I'll be able to show you some "after" pictures. Oh, wait. "Desperate Housewives" is on tonight...
(I've tried four times to edit this post so there is space between paragraphs, but this site refuses to allow that today. I'll try again later. In the meantime, sorry about that.)
Posted by Gullible at 6:30 PM