I spent part of today sniveling and whining and wishing I were in Mazatlan with my friends, eating totilla chips and guacamole, and washing it down with Pacifico. I even sent an e-mail to that effect to one of them. Following more than a week of temperatures in the single digits, but on the top side of zero, we finally got some warmer temps and several inches of snow.

After working and playing at the computer, and pretty much wasting a few hours, I debated between dragging out the snow blower for its maiden voyage this season, or a more expedient method of dealing with five or six inches of snow. I opted for expedient: I drove my truck up and down the driveway a number of times, packing down the few inches of wet snow. At the top of the long drive, where the state highway plows filled the upper twenty feet with snow from the pavement, I pushed the heavy snow into the ditch with a snow scoop.

Then it was back to working and playing at the computer, with Pablo the parrot keeping me company. Darkness comes early now that we're off daylight savings time. Plus, we're losing almost five and a half minutes of daylight a day. Because this valley is ringed with mountains in the four thousand foot range, we lose direct sunlight entirely from mid-November until mid-February.

After fooling around wasting more time, and accomplishing little except for a lesson in advance file management for Word 2007, I decided to go downstairs and watch the five o'clock news. As I stood up from my chair, I was treated to a rhapsody in blue outside my loft window: 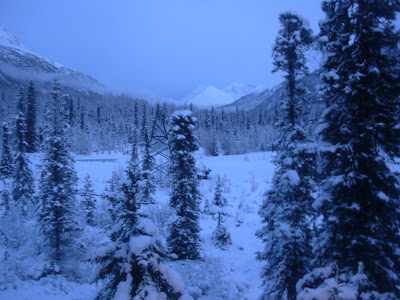 A few minutes later it was too late as darkness embraced the forest once again.


You just can't see anything like this in Mexico....
Posted by Gullible at 6:11 PM