Tired, aching, and discombobulated (euphemism for semi-ticked off) after standing for hours before boarding Royal Caribbean’s Rhapsody of the Seas, I went in immediate search of my stateroom. I found it two decks down, and waiting for me there—the little cheaters—were my two pieces of luggage. We’d been told to take what we needed for the evening in a carry-on because our luggage might take a long time to be delivered to our rooms. It may have, but the passengers took even longer due to the massive screw-up on the pier. 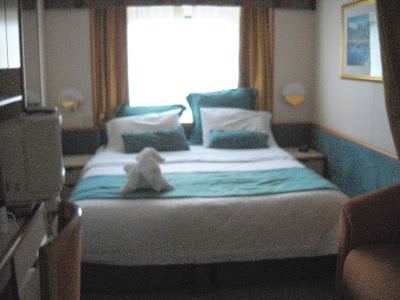 My stateroom on Rhapsody of the Seas. Don't ask me why the photo's blurry. Sometimes my camera does what IT wants, regardewss of what I want it to do.

I was trying to give RCI the benefit of the doubt and remain cheerful, but right then all I wanted was to kick off my shoes, take an Aleve for my aching feet and back, and lie down. I did all three.

Then came the loudspeaker (and I do mean LOUD) announcement that the mandatory life boat drill would take place in fifteen minutes. Don your life vests and head for your assigned station, said the voice. From my prone position on the bed I could see the life vest on the shelf over the closet, right by the stateroom door. 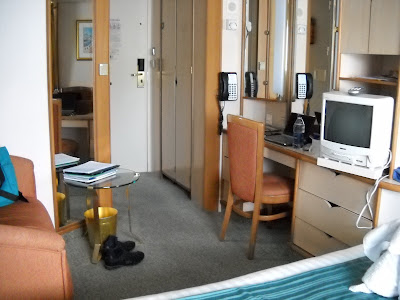 Another view of my stateroom.

Closet, I said to myself. So, I got up and started to unpack. My first surprise came when I opened the closet door. Ye gods! There were enough hangers in there to outfit the largest motel I’d ever stayed in, and I had them all to myself. I was almost finished unpacking when I heard the lifeboat drill alarm, so I grabbed that thick orange thing off the shelf, plopped it over my head and headed up to deck five, station eleven. 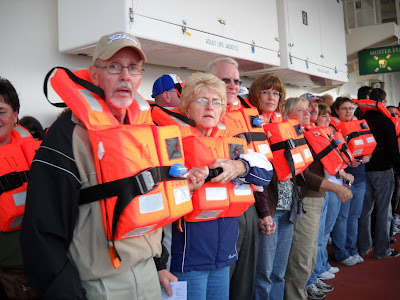 Ready for business. Aren't these expressions priceless? I mean, talk about visions of threatening icebergs waiting in the dark!
Oh, this was too funny, all of us standing around with our heads stuck through things that looked like peculiar orange toilet seats. Required a picture, it did. Eventually the crew herded all the passengers to their stations and we were released to go about our business. (Sorry, “business” in this sense doesn’t have anything to do with the afore-mentioned toilet seats.) 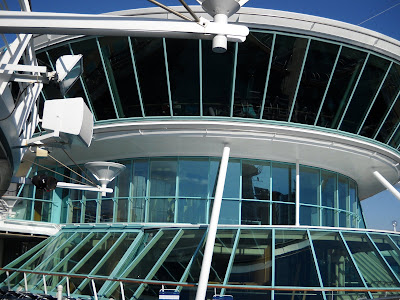 Exterior view of the Viking Crown Lounge, which is the upper level.

I went back to my room and finished unpacking, set the safe opening code to something I was pretty sure I could remember, and tried the lying down thing again. That wasn’t going to work, so I went off exploring the ship. Up on deck eleven, I found the flight deck of Starship Enterprise, only it was called the Viking Crown Lounge. They served gin and tonic there, and all I had to do was produce that cute little plastic card that also opened the door to my stateroom. 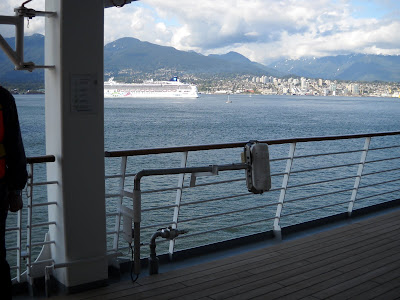 City of Vancouver, British Columbia, in the background as another cruise ship leaves the harbor.

After watching the cruise ship pull away from the Vancouver, BC, dock, by six-thirty about thirty of the students and instructors for the writers’ workshop I had signed up for had converged on the flight deck. Seeking some privacy, and a place where we wouldn’t bother other people, we went up yet another deck and gathered round. Introductions were made, instructions on how to get to our meeting room the next day were given, and some general info on the workshop was offered. Later, most of us gathered in the main dining room, the Edelweiss, for a fancy, sit down dinner. We were assigned to the second seating, which was at eight-thirty. 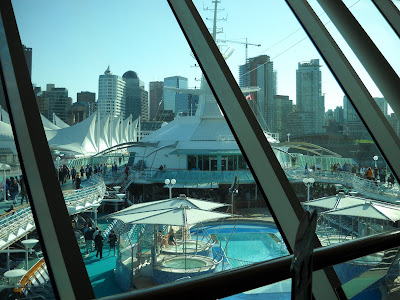 From the interior of the Viking Crown lounge, looking down on the hot tubs and one of the swimming pools. City of Vancouver is in the background.
The others found the wonderful buffet dining room on deck nine at the fore end of the ship, which is where I ate almost all of my meals for the rest of the cruise. That’s the thing you hear most about cruises—the food, plenty of it and all the time. While the main dining room meals were very good, well presented and professionally served, I preferred the buffet. For buffet food, I thought it exceptional: dozens and dozens of entrée choices, fresh fruits and vegetables, Asian and Indian specialties, fresh baked pastries and breads, dozens of desserts and fresh fruit cocktail, and all presented with flair and imagination. 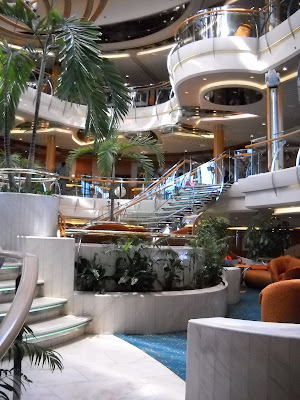 This is the Centrum, venue for many events on the ship. 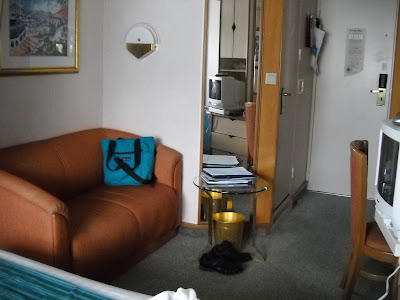 Another view of my stateroom.
By the time dinner was over and I was back in my stateroom, I was ready for bed. In my absence, my room attendant had closed the drapes, left the ship’s daily newsletter on the foot of my bed where I would see it, and wrapped some towels into a cute bunny rabbit. 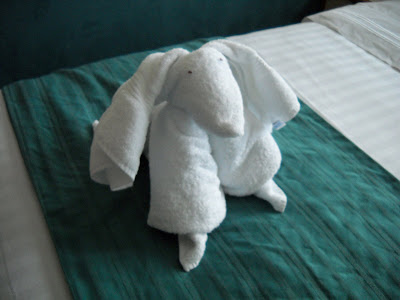 Okay, RCI. I’m starting to forgive you, I thought, as I drifted off to sleep while the Rhapsody of the Seas sailed gently through Canadian waters, heading north to Alaska. Yes, I had come all this way, only to turn around, board a cruise ship for a return to Alaska.