Royal Caribbean didn’t exactly make a good first impression on me, and probably not with the other six or seven thousand people who were trying to board the three cruise ships at the pier in Vancouver, British Columbia. By the time I actually got on my ship, I was muttering “never again” over and over and over and longing for a soft place to lie down.

A stiff drink with my name on it might have been waiting eight decks above, but I was too tired to care. I’d just wasted a perfectly good afternoon standing on concrete in a chilly, drafty parking garage to board a cruise ship that was tied up so near I could almost spit on it, except I can’t spit very well and I didn’t want it running down my chin in front of all the other people who were waiting with me.

One of the blogs I follow is Confessions of a Pioneer Woman, who writes about her life on a cattle ranch in Oklahoma. She frequently posts photos of her family working the cattle, and of the cattle being led into chutes for various reasons. I now know exactly how they feel, thanks to Royal Caribbean. I will say this: it wasn’t all RCI’s fault, nor was it the fault of the Holland America Line or the Norwegian Cruise Line ships that were tied up next to RCI’s Rhapsody of the Seas. It wasn’t the fault of the extra large ship that had tied up at another pier—the one previously reserved for Rhapsody—because it was too large to dock where the three ships were now.


It wasn’t even the fault of the Vancouver port authority, or the fact that it was opening day, with lots of new employees. Nor was it the fact that the gangway for RCI’s ship had thrown a tantrum earlier in the day, and wouldn’t allow seven hundred passengers to disembark, despite RCI’s cleverly crafted plans for rapid off-loading. It was all those things combined, plus some really bad luck, that had six or seven thousand tourists stuck in endless lines in a chilly parking garage, waiting for hours to board their appointed vessel.

Not a good beginning, as I said. 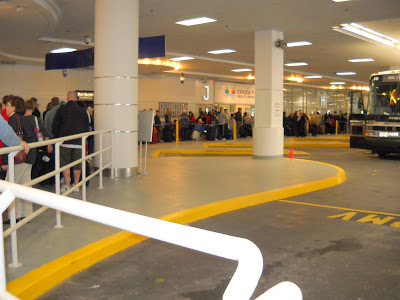 This is less than half of the first line, the one that went all the outside, up to street level, turned the corner and went past Starbucks.

The line that snaked through the parking garage, up the curved walkway to street level, then made a right turn and continued on down the sidewalk past Starbucks was the longest line. As far as I’m concerned any line that goes past any Starbucks is too long a line for me. While walking from where the shuttle bus from the hotel had dropped us off in the parking garage towards the general direction of the end of that line, a group of us were waylaid by a woman telling us to take the elevator up to street level rather than buck the flood of people coming down to this level. While waiting for the elevator, another woman told us to take the elevator down one story, where the RCI line was shorter. 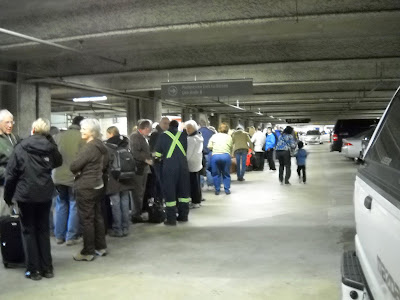 We did. That line was substantially shorter, but it was still an hour and a half long. Once we reached the bottleneck for that line….well, I can’t even remember what we did there. Showed our ID, I think, as well as our reservation paper that showed we’d actually paid for the privilege of standing in long lines to take what was supposed to be a luxury cruise.

Maybe it was the line for customs because I recall showing my passport, but it seemed every time I turned around, I was showing my passport. No, customs was the next line, but that was only a half hour line. Somewhere along in there I think they took our pictures so the computers would recognize us later on when we got off the ship and then wanted back on. Right now, though, the problem was just getting on the darned thing in the first place. 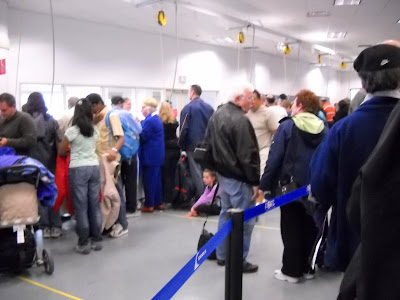 The lines for the magic credit card--the boarding pass.


Anyway, we got through that gate and took the elevator upstairs to a large room and another long line, only this time we got to sit down to wait another hour or so, after we filled out a piece of paper attesting that we had not coughed or sneezed or had swine flu or been breathed on by someone who had it nor had any of our relatives or acquaintances for five generations back had it. Or something like that.

If you ‘fessed up, RCI offered you immediate medical treatment. I’m not sure what that entailed, maybe solitary confinement in the ship’s brig, but nobody was going to forfeit the big bucks they’d paid for this trip by fessing up, especially after making it this far through the lines. Besides, you’d probably have to stand in another line, and as a mutiny was already fomenting even before we got on the big boat, I’ll bet everyone filled out their form with “NOT ME,” even though we’d been standing for hours in a cold, drafty parking garage with hundreds of germ-carrying people from around the world.

Then, little by little, our numbers were called and we walked across this huge room to stand in another line. This was the line for our actual boarding passes, a credit card sized piece of plastic that was the be all and end all for our cruise. Put away your money and your ID and passport, but don’t lose that little plastic card because not only was it your room key, but it opened the gates of cruising Nirvana for you. It was the multi-purpose card of multi-purpose cards.

Then we stood in another line, the gangway, only this one was actually moving faster than evolution and leading us right up onto Deck 5 of the Rhapsody of the Seas. 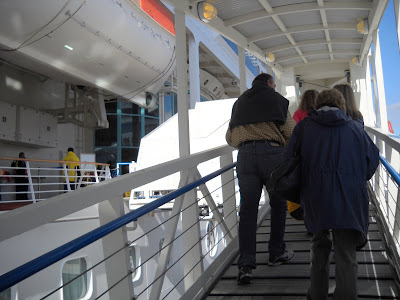 This whole fiasco took so long that RCI had to reschedule the mandatory life boat drill for later in the day and assure everybody the boat wouldn’t leave without them. Throughout this whole process, I kept thinking that only a week before I’d been sent to the emergency room in an Anchorage hospital to have an MRI of my head. The scan showed nothing was wrong physically, but after four hours of lines I was wondering if maybe that doctor wasn’t on to something.

So, yeah, I know what cattle in chutes feel like