Of course I'm open to criticism of my writing. Constructive criticism, that is. Not criticism for the sake of criticism, and sometimes it's difficult to know the difference. All writers have an innate inner critic, one that is far more severe than any external critic. Except, perhaps, when that external critic is a Mexican Double Yellow Headed Green Amazon parrot named Pablo:

The most important lesson in the writing trade is that any manuscript is improved if you cut away the fat. -- John Steinbeck (1902-1968) 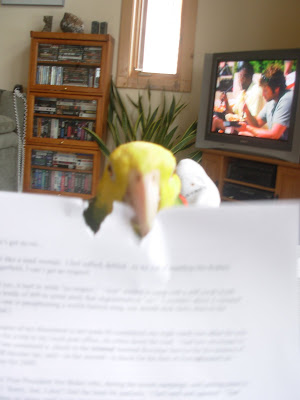 The most essential gift for a good writer is a built-in, shock-proof shit detector. --Ernest Hemingway (1899-1961) 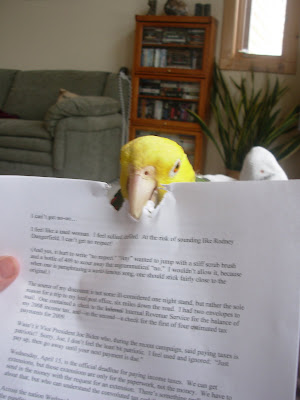 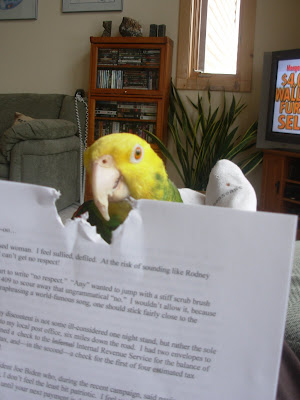 I have been correcting the proofs of my poems. In the morning, after hard work, I took a comma out of one sentence....In the afternoon I put it back again.-- Oscar Wilde (1854-1900) 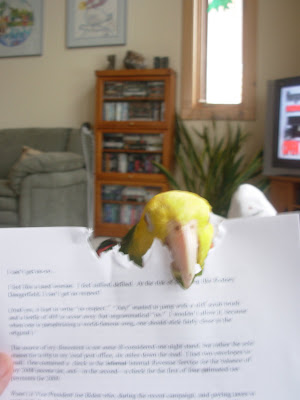 Writing is easy. Just put a sheet of paper in the typewriter and start bleeding.--Thomas Wolfe (1900-1938) 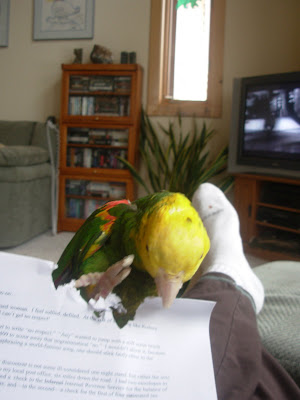 Coleridge was a drug addict. Poe was an alcoholic. Marlowe was killed by a man whom he was treacherously trying to stab. Pope took money to keep a woman's name out of a satire then wrote a piece so that she could still be recognized anyhow. Chatterton killed himself. Byron was accused of incest. Do you still want to be a writer--and if so, why?--Bennett Cerf (1898-1971)

(PS: Double-clicking on the photos will give you an out of focus close up of Pablo. Caveat emptor. The words on my sock are "No Nonsense." It's my motto, but I keep it hidden in a shoe so I'm not reminded of it too often. The spot on my sock is blood. It's there because I had just worn a blister on a toe walking on the treadmill in my old, worn out hiking boots. )
Posted by Gullible at 12:50 PM