The news was all over the radio and TV yesterday: hooligans had brought traffic to a screeching crawl over a two-mile stretch of the main (and only) highway leading south out of Anchorage, and just as the Memorial Day weekend was kicking off. What a mess! And mess is exactly what was on people's minds--a mess of hooligan.

Those oily little fish known in Alaska as hooligan or candlefish were running in Turnagain Arm, rushing in with the incoming tide in numbers so thick you can scoop them out of the silty gray water of the arm with a net. 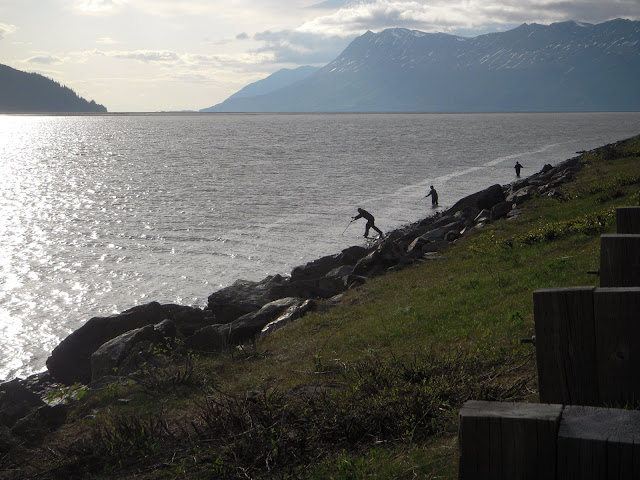 
Usually when you see a bunch of cars parked along this stretch, it's because orcas or beluga whales are spotted, or maybe a wall of incoming water known as a bore tide is approaching. But this time of year, it's Thaleichthys pacificus that is the center of attention.

Numerous cars parked alongside this busy two-lane highway, and people darting back and forth, climbing over the guardrails, crawling down the steep embankment and dipping their nets in the cold water after the little fish had prompted the Dept. of Transportation and Alaska State Troopers to reduce the speed limit from 65 mph to 45 mph from Peterson Creek to Twenty-Mile River for safety. 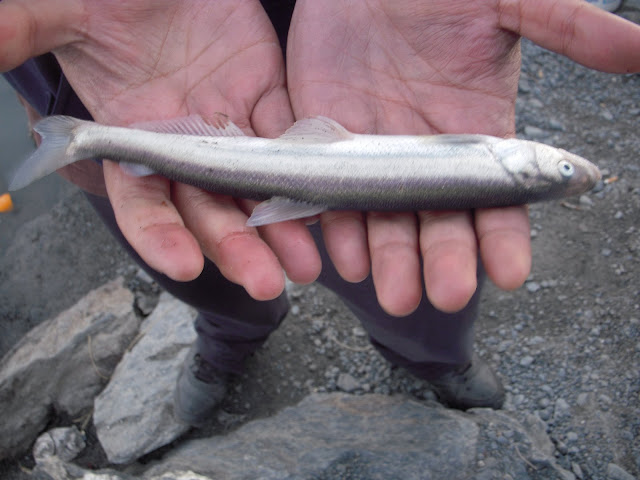 About eight or nine inches long, these smelt (euchalon) are prized for their oil. Long ago, they were dried and--when set on fire--used as candles by Alaskan native peoples, hence the name "candlefish." Today they are fried, smoked, pickled, and whatever. As for myself, I long ago lost my yen for hooligan, as one meal of fried hooligan will last me for a long time. They taste great, especially when smoked, but they go a long way. Catching them is ever so much more fun, if you can imagine scooping out a net half-full of wriggling little fish. And, oddly, their skin with its tiny scales is not slimy. 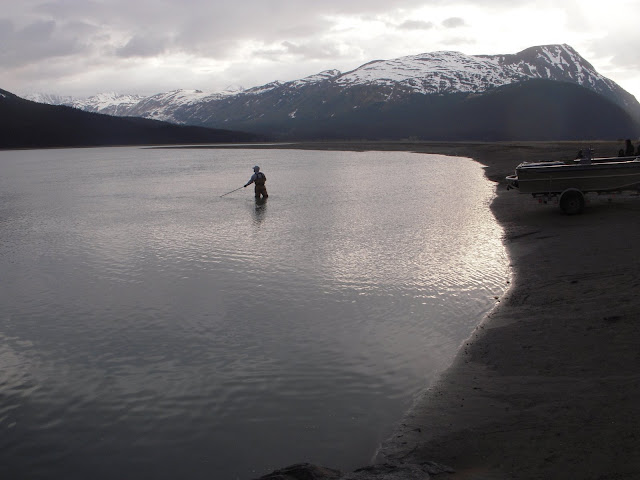 The man shown above is risking his life in his search for hooligan, because under his feet is the treacherous silty clay that is common in Turnagain Arm and its sister, Knik Arm, both branches at the northern terminus of Cook Inlet. Dozens of lives have been lost by people getting stuck in this clay and drowned by the incoming tide. Dozens have been rescued too. The trick to avoid getting stuck is to not stand in one spot too long. Standing in place and switching your weight from one foot to the next causes water to mix with the semi-solid clay, turning it into a gooey version of quicksand beneath you. 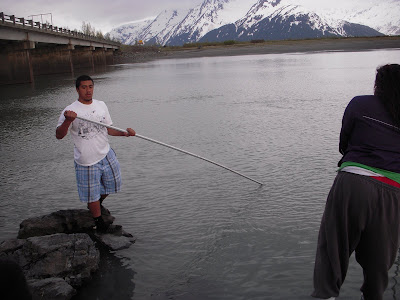 At this upper end of Turnagain Arm, near Portage Pass where gale and hurricane force winds are measured frequently, clouds obscured the sun, making temperatures drop. A brisk wind added to the coolness, but the fisherman above seemed immune to the cold. 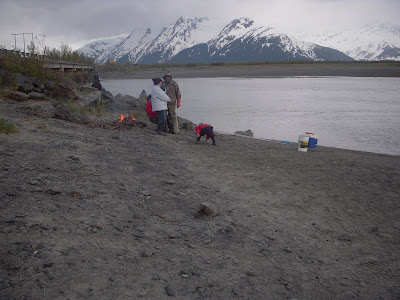 This photo, however, looked to me like the perfect way to enjoy hooligan fishing. Notice the bonfire built on the stable silt banks of the river. These pictures were taken when the outgoing tide was still rushing from the tidal flats, while fifty miles to the west, at the mouth of the arm, the incoming tide was pouring in, bringing with it the precious hooligan. An hour later, I probably wouldn't have been able to find a place to park as hundreds of people would have converged on this short stretch of highway.

All for the love of a tiny oily fish.

About a year ago, I was taking an online writing class. The assignment was to write about a candle. As usual, I started coloring outside the lines, and the following--wholly from my imagination--is what resulted:


A Tale of Two Candles


“It was the best of times; it was the worst of times,” began Charles Dickens when he wrote “A Tale of Two Cities.” Ahnan, the Inuit woman sitting on the caribou hides in her underground sod home, would never know of Dickens and his famous novel. She, her husband Kinaktok, and their daughter Tanaraq, as well as their grandchildren and their grandchildren’s grandchildren, would have moldered away on the frozen Arctic tundra long before the pale ones with their wasting diseases and their coughing diseases would find the tiny village on the northern Alaskan coast.

She would agree with his words, though. It had been a winter of despair. They had used up most of the food supply during the long bitter months of cold, and were now eating the dried chum salmon and sheefish that were intended for the sled dogs. There had been no whale for the village this season.

Kaskae, the whaling captain, had missed his strike when the whales were migrating past, and the faces of the whalers had been worried when they returned to the rocky beach in the umiak. There had been such hope. The umiak (boat) had a new covering of female walrus skin, and the women of the village, who had sewn the covering, were proud that it did not leak. The hunters had wasted valuable hunting time pulling the old leaky umiak onto the sea ice and emptying the salt water from it.

One bowhead whale was all they needed to sustain themselves with oil and muktuk (fatty layer of whale skin) for the winter. The fatty food would help them stay warm until the sun came back. Even the seals were scarce. Kinaktok had spent many days lying beside a seal breathing hole, waiting for the precious seal to pop out onto the ice. Seldom did he come home with a catch. He and the other men stretched a walrus hide tight and tossed one of the sharp-eyed young men high into the air to search for Nanuq, the great white polar bear. None were seen.

Today, though, today was different. Now was the spring of hope. The sun had once again found the village and would give three months of constant light and warmth. Daughter Tanaraq was playing outdoors while Ahnan chewed a caribou hide to make new mukluks for Kinaktok. The burning candlefish was guttering, casting the hut into semi-darkness. Setting aside the heavy hide with a sigh, Ahnan raised herself and crept bent-over to the stone bowl where the dried fish sputtered and crackled as it sent greasy soot upwards towards the smoke hole in the sod roof. She took another fish from the dwindling supply, but hesitated before lighting it.

Perhaps she should wait in the darkness for Kinaktok to return. If his hunt is not successful, they may have to eat this little fish in a few days. She smiled as her gaze took in her discovery. A small basket of tightly woven sea grasses held congealed seal oil. In the very center was a darkened willow twig, wrapped in more dried grass. She had been teaching her daughter the basics of basket weaving last night, showing her how to patiently wrap grass around twigs. The seal oil was left from last night’s dinner of dried salmon dipped in the oil, and somehow the twig with its braided grass covering had landed in the bowl when the boisterous Tanaraq had tired of her lesson. The cold night air had hardened the oil to a solid state.

Ahnan had touched burning lichen to the twig this morning after she lit the candlefish, and was surprised when it burned brighter than the hooligan*. It also didn’t smell of burned fish, she thought, and the smoke was not as greasy. She pinched the small yellow flame that reminded her of the yolks of sea gull eggs that they gathered in the summer. She heard the sizzle of the oil as it touched the ember on the tip of the twig.

I will save this new thing for when Kinaktok returns from the hunt. If he is successful he will enjoy this discovery. If he is not, perhaps it will cheer him, she thought. He is a clever ivory carver. Maybe he can make this new thing better.

“Mama! Mama!” Tanaraq yelled through the tunnel entrance to the hut. “Papa is here with fresh caribou heart and liver. He is taking the dogs to bring home the meat.!”

Ahnan smiled at her daughter. The girl’s straight black hair was in disarray, her laughing brown eyes sparkling in the light from the new burning candlefish. Turning quickly in the narrow entrance, her white oogruk** gut quspuk*** caught on a branch and tore a small hole in the rain garment. Ahnan smiled and shook her head. At least it didn’t tear the ground squirrel parka underneath.

Fresh meat, she thought as she crawled through the tunnel to greet her husband. This is much more important than my seal oil candle. I will save that for another time. Tonight we will celebrate the successful hunt with the others. I will mix the last of the soapberries with seal oil and clean snow to make akutak (Eskimo ice cream).

Ah, she said to herself, it is the best of times.


* Hooligan: also called eulachon. An oily smelt, sometimes dried and used for food,
or, when strung with a wick, burned as a candle.
** Oogruk: bearded seal
*** Quspuk: protective parka worn over a fur parka.