I paused on the bridge over Kenai Lake in Cooper Landing this afternoon just long enough to snap a quick shot of swans that are spending the winter here. Those white lumps next to the icy shore are swans. The gray lumps are their cygnets.

I apologize for the lack of focus in this picture. I have a good excuse, too. I mentioned stopping on the bridge over the river, right? No traffic, just me. I pushed the button to roll down the passenger window, then held the camera up and got ready to shoot the scene just where the brush parted and the swans could be seen.

One last peek in the rear view mirror before I depressed the shutter to focus--and I saw an 18 wheeler beginning to cross the bridge right behind me. No time for half-down to focus, snap the shot and move it, Gully, before you're road pizza.

Voila! Fuzzy photo. Besides that, I broke my favorite Nikon Coolpix AGAIN, and I'm using a substandard replacement while the good one gets sent to the camera hospital. 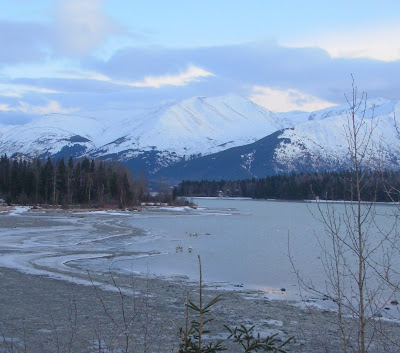 A little further down the road, at my last mail stop of the day, a frosty saddle spoke of better days. 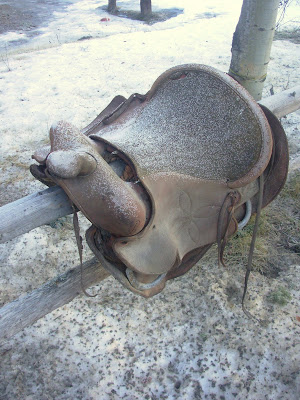 Mid-January. The days are getting longer by a couple minutes now, but we are still in deep winter. January and February often bring the most bitter cold as the the mercury in the thermometer takes a death plunge, but right now the temperatures are above freezing. Rain has visited us several times in the past week, melting snow and turning driveways into ice rinks where packed snow thaws and freezes.

Yet, the swans remain at Kenai Lake, and an old saddle reminds us that in four months the outfitter will once again be saddling his horses and taking folks on trail rides through the mountains around a turquoise lake.
Posted by Gullible at 1:10 AM