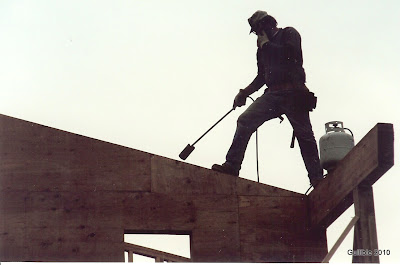 Melting frost off the top plates prior to setting the rafters.


Seems like when you’re home, things just roll on forever, day after day, nothing in particular happening. Lawns get mowed, or not. Flowers bloom, or not. Projects get done, or not.

Then, you leave town for a week, and all kinds of stuff happens. People die. Houses burn down. Precious canine companions get hit and killed.

What the heck is that all about?

So, that’s what I came back to after eight days away from home. I mean, I was down where bad stuff could happen any time. BIG brown bear tracks everywhere, accompanied by wolf tracks. Fording glacial rivers where rain miles and miles away could cause flash flooding. Camping on beaches open to the , where tsunami evacuation route signs are prolific, but the beaches are far from any warning sirens.

Two crossings of the on a ferry. Okay, that one’s not so bad. It’s an ocean-certified ship. Sea sickness was possible, especially going down to Yakutat. But coming back? Heck, I’ve kayaked rougher water in little old down the road from me than the Gulf showed me coming back.

The potential for bad stuff was enormous.

But, no. I had to come home for the fit to hit the shan, or something like that.

For the eight days I was gone, I was unreachable. No cell phone or Internet service in Yakutat, and certainly not in the park service cabin we were in across . When I got home the message was on my phone: Phil had died suddenly while putting an addition on a friend’s cabin. Tom, the friend, came around the corner of the cabin and saw Phil on the ground. Our local group of dedicated, volunteer emergency response personnel was called, but Phil was gone. Sixty years old. Gone.

Phil built the house I’m living in today. Built it from my floor plans and sketches. Built it in his head and then nailed the boards together. It’s a fine house. It’s such a fine house that when all the rooms were cleared of tools and construction debris and swept and vacuumed and ready for the carpet layer, I found it hard to believe it was mine. 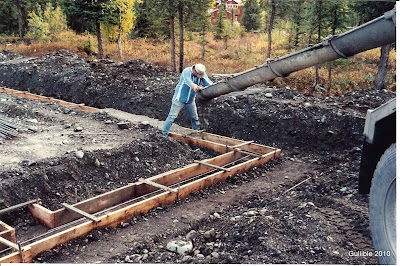 Then after the carpet was down and all the scraps picked up and the floors vacuumed again, I walked into the living room and said, “I feel like someone’s going to come in and tell me it’s all a mistake—this really isn’t MY house and I would have to leave.” 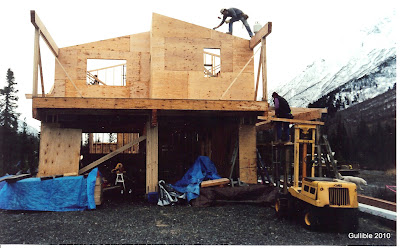 
Phil had done other projects for us. He worked on some of the extensive remodeling we made at the lodge we owned for seven years. He built the foundation and floor and decks for a lakeside pavilion at the lodge. Another friend did the log work.

He could be an infuriating man. He could make you so angry, you’d swear you’d never hire him again, except you didn’t want to hurt his feelings. And, getting him to finish a job was a real feat. Phil definitely marched to his own drummer.

He’d work on your job for a while, then tell you he had to do something at another job for a week. A month later, you were still wondering where he was. Eventually, he’d come back to your job, then disappear again. We called them his “sabbaticals.” They were maddening. 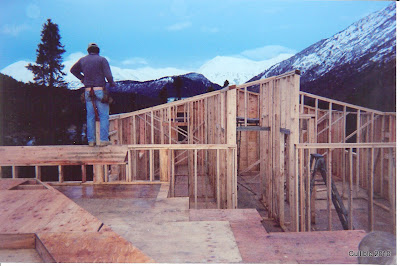 Phil framing my writing loft/library.
After the stairs to this third level were complete, word got around the canine community and EVERY dog in the neighborhood (and some I didn't know) came to check out the view. Just laid down and made themselves at home.


But when Phil was working, he could work circles around any other carpenters in the business, and I’ve been around quite a few of them. Any of the local guys who tried to work with or for Phil had to have lots of patience and thick skins, but the educations they got were priceless. Phil could do it all—from the concrete foundation to the top of the roof. Everything but the plumbing and electrical, though he could probably do those if need be.

Phil and I were friends for many years. He was occasionally a guest in my home though he tended to keep to himself socially. He lived alone with just his two enormous dogs in an older place he was “remodeling.” He drank lots of coffee and smoked lots of cigarettes and ate once a day. During the winter he became a hermit, and weeks would go by without anyone seeing Phil. I’d check to see if his truck had been moved, if his dogs were in or tied out. That way I knew Phil was still alive. 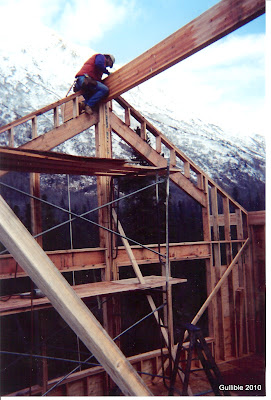 
He never answered his phone, but let the machine do it. Then, if he wanted to talk to you, he’d call back. When the time came for him to present a bill for his services, you might have to wait a long time for it if he didn’t give it to you right away. That was Phil, take him or leave him.

He and I got cross-threaded once, and it put a big hitch in our friendship for a few years. The day it happened was September 11, 2001. I was frantic to get a sealer on the expensive log siding of our new house, and I’d been working on it for several days instead of waiting for Phil to spray it on. It was unseasonably chilly that morning, as if winter couldn’t wait to pounce on us.

An early morning phone call from a relative alerted me to turn on the television—the in had been hit by an airplane. “Probably another Timothy McVeigh,” I said to the caller. 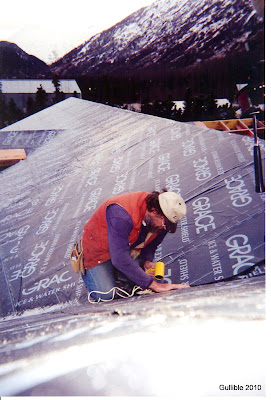 Using a hair dryer to seal the ice/water barrier on the roof. The day the plywood sheeting was nailed down, I watched a bald eagle come flying down the valley, swoop quite low to cruise over the house, and tilt its head to see what was going on.


“No,” he replied, “This is something else. Terrorists.”

I turned on the TV in time to see the second jet hit the second tower and to hear about the one that struck the Pentagon. My brother, a retired Army intelligence officer and now working for a defense contractor in , often had appointments in the Pentagon. When I finally reached him by phone, he told me had an appointment to be in the Pentagon the next morning at 10 a.m., in the very part the plane had pulverized.

I went out to the house, opened the cans of Behr Rawhide sealer and dipped in a brush. It was like trying to spread Jell-o when the sealer contacted the chilled log siding. 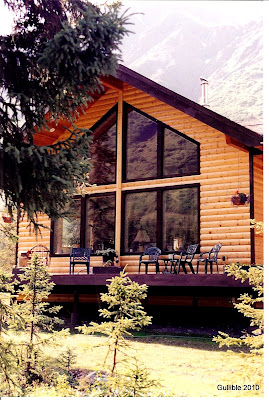 Right then I realized two things:

1. How close my brother came to being in the wrong place at the wrong time, though on this day the doomed jet had flown low over his office building and he had watched the plane strike the Pentagon a few miles away, and,

2. It was too late in the season for applying more sealer. A minor thing, in retrospect, but at that moment, with all the gut-wrenching turmoil inside me, it became the outlet. “It’s too late,” I said to Phil. “It’s too late!” Tangled up in those words were all the delays and the “sabbaticals,” and Phil knew it. He was offended and reacted in his own way, with more delays.

We let Phil go a few days later, and my husband’s son and another friend finished the house. 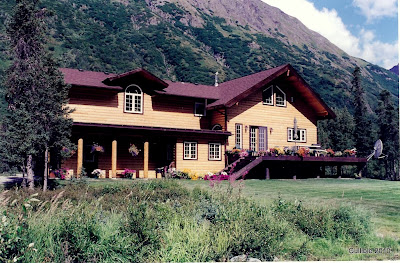 The finished house, south side.

A few years went by. My husband’s Alzheimer’s worsened considerably and the time came to put him in an assisted living home. When I returned, distraught and exhausted from that deed, Phil was building a carport for me, having told me previously that if I needed anything done, he’d be glad to do it. It was our way of healing the rift, and even though it took him three summers to finish the job, we were friends again.

This summer, Phil was supposed to build a railing around my extensive decks. Well, actually, Phil was supposed to have built it last fall while I went to . But I guess the early winter caught up with him and Phil went into his winter hibernation mode. I wasn’t surprised or angry when I returned to the status quo. There was always this summer for the railings, and if not this year, well, next was okay too, so long as I could put off the insurance company’s demand. 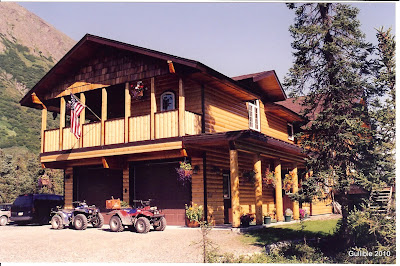 West side with two-car garage, bedrooms above, hot tub deck behind flag.

I went to a celebration of Phil’s life this afternoon. There’s a saying that people who live in end-of-the-road towns do so for a reason, implying that maybe they don’t fit in anywhere else. Well, for one thing the road doesn’t end in our little hamlet. It goes right on through and keeps going until it does end thirty miles away.

For another, I think end-of-the-roaders gravitate to these small towns because they’re special, that they have something to offer on their own terms, at their own choosing, according to their own timeline, and small towns are where they’re loved and appreciated the most. And forgiven and tolerated their foibles. 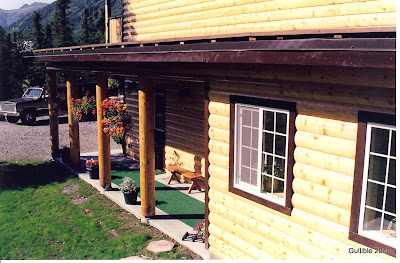 Darn you, Phil. Why’d you have to go and kick the bucket, my friend? I’m sure going to miss you. But if you run into my late husband hanging around a pool table somewhere, I hope you two have a grand old time. Again.

He built the foundation and deck, seen here being sealed.... 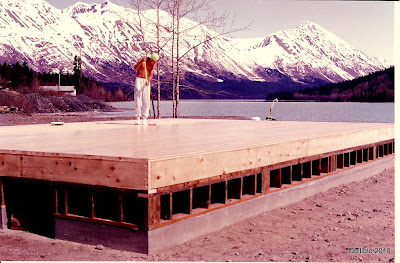 ...for this remarkable building constructed by Butch Reger of Cooper Landing. 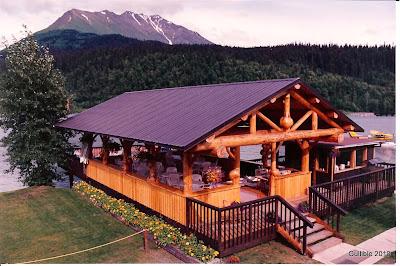 This lakeside pavilion is located next to the lodge we owned in Moose Pass, Trail Lake Lodge.