(Note: Don't forget. You can click on the pictures to enlarge them.)

Sometimes history just jumps up and whomps you in the face when you take off on a trip. That’s what it did to me when JJ picked me up and we headed to to catch the ferry to Yakutat.

At the end of my driveway, we pulled onto the two-lane road called the , named after William H. Seward, Secretary of State during the Abraham Lincoln and Andrew Johnson presidencies. Seward arranged the purchase of from in 1867, almost 600,000 square miles for 2.3 cents an acre.

I’ve walked every inch of the first thirty miles of the fifty to . That’s my litter-picking area, through the former gold fields of the Kenai Peninsula, now part of the vast . After the rest areas in at the thousand foot elevation, a long winding seven mile descent took us to the northern terminus of the Kenai Peninsula and the saltwater of Turnagain Arm, a branch of . 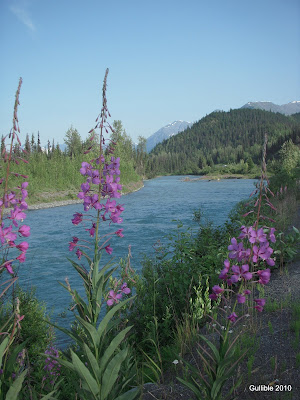 Near Silvertip on the Seward Highway.


The inlet is named after Capt. James Cook, the renowned English explorer who met his death at the hands of Hawaiian warriors at on the Big Island of Hawaii. Cook “discovered” the inlet and its twin arms of Knik and Turnagain earlier in that voyage as he searched for the fabled . 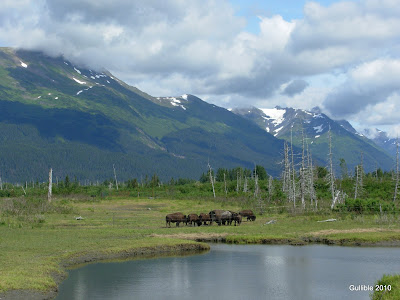 A small herd of bison at the Alaska Conservation project, Portage.

Two other British explorers who sailed with Cook have ties to and Turnagain Arm. They were Captains George Vancouver (who named the inlet after Cook) and William Bligh, he of HMS Bounty notoriety. Bligh, frustrated after a small exploratory sailing into Knik Arm failed to reveal the , and another into the southernmost arm also returned with bad news, named the second arm “Turn Again,” today called Turnagain Arm. ’s population is hovering around 700,000, and the majority live in the watershed. 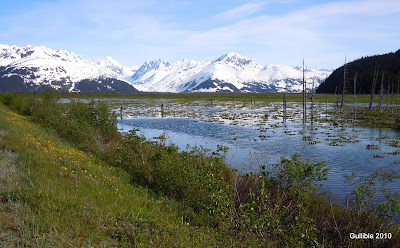 Near Portage valley along the Seward Highway.

The highway loops around the end of the arm and heads for At one point around that loop is a turnoff onto the , which we took. This road travels through , hemmed on three sides by mountains and hanging glaciers and streams. Just before the road runs into a mountain, there is the number one tourist attraction in the greater area: Portage Glacier and the Begich,. 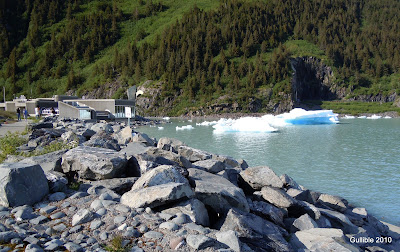 Again with the history. In 1972 ’s lone U.S. Congressman, Nick Begich, was running for re-election. Joining him here for a fundraising junket was House Majority Leader Hale Boggs of Louisiana. With pilot Don Jonz at the controls of a single engine Cessna 310, Begich and Boggs, along with Begich’s aide, took off from on Oct. 16, 1972, headed up Turnagain Arm towards

I was living in Girdwood, a small ski town located 35 miles from the arm. On that day, at roughly the same time, I left Girdwood driving towards in rain, fog, and screaming winds. I considered turning back. The sound of a loud plane caught my attention and I noticed a small craft heading into the snarling storm. I wondered who was crazy enough to fly in such awful conditions.

The plane and its occupants were never seen again. The largest search in history, combining forty military and twenty civilian aircraft of every type from spy planes and helicopters, and continuing for thirty-nine days, failed to turn up any evidence of a crash. I may have been one of the last people to see that plane before it headed into the malicious winds of

Ironically, shortly after the plane disappeared, a well-known flying magazine circulated its latest issue containing a story written by pilot Don Jonz. It’s subject? How to fly 365 days a year in .

Winds in the area have demolished instruments placed to measure their speed, exceeding 130 miles per hour.

At lake, a glacial fed body of water that frequently sports ice calved from the face of and other nearby glaciers, is the Begich, . JJ and I stopped alongside the lake and took photos of the dense blue ice floating in the lake. 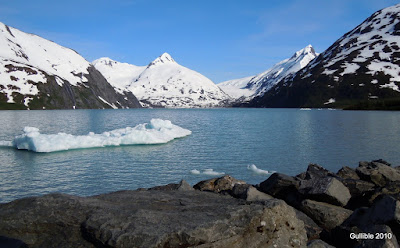 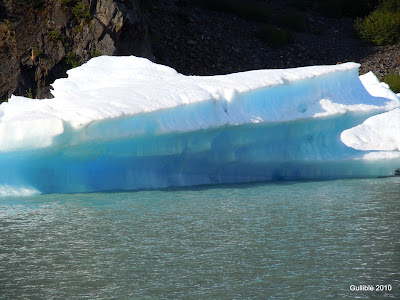 I looked at the glacier now so far away. During my time In Girdwood, I once flew in a small ski-equipped plane to land on the glacier with a group of friends. Only after the plane took off and left us high on a snow-covered mass of ice did we discover how horrid the skiing conditions were. Imagine trying to ski through wet concrete. 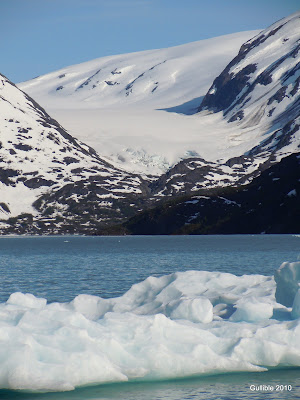 Glacier through a 200 mm zoom lens. My ski trip started up around the corner to the right, came down the glacier onto lake ice.

We eventually made our way down by skiing in a switchback manner, poling our way through heavy, wet snow and falling often. Finally we reached the frozen lake below the face of glacier, and slogged the two and a half or three miles back to our vehicles. Today, glacier has receded so far you can barely see it. 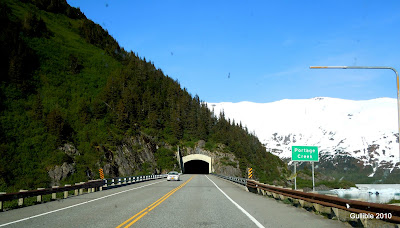 The short tunnel to Bear Valley.

We left the lake and got back on the highway, drove through a short tunnel into and arrived at the Whittier Tunnel staging area. 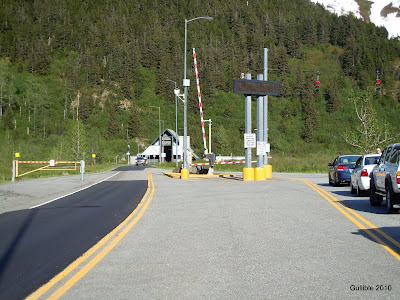 It’s a shared tunnel—motor vehicles and trains. And it’s only a single lane wide. All we had to do was pay our $12, get in line and wait for the green light.

And hope a train wasn't coming from the other direction.