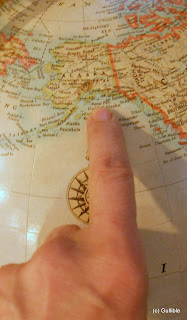 I put my finger on the globe, covering the spot in where I live. The 150th longitude lies adjacent to that point. I moved north, past the land mass of , over the geographic North Pole, and headed south.

Now my finger followed the corresponding 30th longitude south alongside , through charming , and close to , from where my paternal grandparents emigrated a century ago. My finger traveled through the , then across the Black Sea, through , across the Mediterranean Sea, finally stopping in . Somehow that served to increase my empathy for the Egyptian protestors. 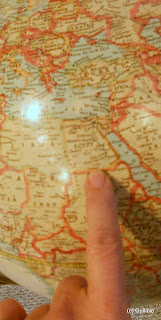 I came so-o-o-o-o close to being there, in , when protests erupted in . I’ve been looking at a trip to for a couple years. Actually, I’ve wanted to see the pyramids since I first heard such things existed. For much of my adult life, it was not a safe place for Americans to visit, and just when I thought it safe to go, exiled Islamist terrorists massacred 58 mostly Swiss and Japanese tourists at Luxor last year.

When you travel with an organized tour company, your e-mail in box will be forever full of special offers from the tour company, especially when tour dates near and the company is trying to fill all the seats. So when I got a terrific offer from one company for a three-week land-river cruise that hit the highlights in , special pricing including airfare, and a free single supplement, I almost hit “book now.”

What stopped me was going to the post office and listening to National Geographic radio on the drive. I heard about small group tours to and hikes to see the mountain gorillas there. Yes, I thought. Not this year. Mountain gorillas. So, I passed on the tour to , but, my gosh, I came so close to being there right now.

Now I visit on TV, thinking it might not be on my itinerary for what’s left in my lifetime. These are days of profound uncertainty, here, there, everywhere.

Forget Dancing with the Stars. The best terpsichorean on the globe right now might very well be Sameh Shoukry, the Egyptian ambassador to the Listen to him on the cable news channels, and you get the idea that all is well with U.S.-Egyptian relations and can just relax. We’re fine, you’re fine, they’re fine, everybody’s fine, fine.

When Egyptian President Anwar Sadat was assassinated, in part for his participation in the Camp David Accords that promised peace with in 1979, he was succeeded by Hosni Mubarak, the dictator who just “resigned” from office. Because Mubarak abided by the Camp David Accords, and also probably because the poured billions in foreign aid into the Egyptian Army, Mubarak was considered a ally.

Email ThisBlogThis!Share to TwitterShare to FacebookShare to Pinterest
Labels: Egypt