Identity Crisis as the World Turns

Feeling a little off-kilter these days?  Maybe feel like yelling, “Stop the world!  I want to get off!”
Can’t help you there.  In fact, it gets even worse.
When I first saw Alfred Hitchcock’s 1958 psychological masterpiece Vertigo, I’d never before heard the word.   Then with all the action in towers and such, I thought it meant a fear of heights.  I was wrong; that fear is called acrophobia.
Many years after seeing that movie, I found out first hand that vertigo actually is a feeling of dizziness, usually caused by a movement or a visual change in perspective.  Sometimes it can be brought on by looking down from a height, hence the misunderstanding.
I’ve never been afraid of heights, and that’s a good thing for a tomboy who spent half her childhood in trees.  Ladders, roofs, cliffs—none of it bothers me.
The only time I got uneasy about heights I was snorkeling in about fifteen feet of water in Kealakekua Bay in Hawaii, the place where Capt. James Cook was invited for dinner--as the entree.  A short distance from shore the sea floor dropped almost vertically more than a hundred feet.  It took some major mind-bending before I could swim out over that precipice.  That same day I donned SCUBA gear and descended to a small bed of sand at minus 105 feet.
But, back to vertigo.  That’s the sensation of dizziness, like everything around you is spinning but you aren’t.  It’s very disconcerting.
But, in truth, you are, you know.  Spinning.
Not only is the earth spinning its catawampus way around the sun so that we up here in the sub Arctic get our share of the sun for a few months, it’s also wobbling.  If that’s not enough to make you toss your cookies, what I’m going to tell you next certainly should.
Ever since I first heard about astrology, I’ve believed I was a Sagittarian.  I’m supposed to be playful, loyal, and devoted to my lover(s—plural, mind you!), and should seek intellectual, gentile mates.  My career choices should be travel agent, photographer, explorer, and so on.  I don’t mince words.  Plus, I love to spend money and don’t fret too much about where the next buck is coming from. 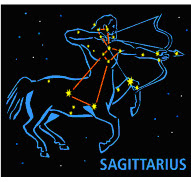 We Sagittarians are procrastinators (yes), playful (yep), don’t mince words (unfortunately), and in the boudoir are…   are…   Oh, never mind.
So far, so good.
Now I find out that because the earth has been wobbling around, it’s no longer in the same place it was 3000 years ago when the astrological charts were devised.
Now, for Pisces’s sakes, I find out I’m actually a Scorpio.  No wonder I couldn’t stay at the same job longer than three years.  I was supposed to have been a doctor, scientist, police officer, or psychologist.  Are you kidding me?  I bailed out of Psych 101 as fast as I could.  They were speaking a foreign language there.
Plus, I’m supposed to have strong management skills (NOT), and be disciplined enough to stick to a budget (NOT).  And, I should have a controlled, cool exterior, and not show emotions.  OMG.  Stop the world, I want to get off.  I AM a Sagittarius.  My emotions are not only on my sleeve, they are scattered around me like Hansel and Gretel sowing their bread crumbs.
So, if you’re feeling like your wobbling on your axis, you might want to Google the new astrological calendar and find out who you were really supposed to be.
There’s hope, though, because some claim the “the new astrological calendar is irrelevant to western astrology which uses the Tropical Zodiac, which is not constellation based, as opposed to eastern astrology which uses the Sidereal Zodiac, which is constellation based …and…what the new calendar is based upon.”
That new calendar’s thrown in another sign of the Zodiac, too, called Ophuchicus.  I can’t even pronounce it.
Me?  I’ll stick with Sagittarius.  It says I’m a tomboy and that is so right on I’ll believe anything else.
Posted by Gullible at 10:32 PM