The morning started out right--bright and sunny.  Plus, I found my newspaper lying in the driveway instead of the ditch where it usually lands.  I keep a long-handled snow rake out there to drag the paper up to the driveway.
Then the day spun 180 degrees on its axis and plummeted onto the garage floor.  That’s where I found water from the downstairs toilet flowing across the floor.
That means my septic line is frozen again.  I say again because Bob the Roto Rooter guy thawed it out a week ago.  So today, I’m waiting for Bob again. 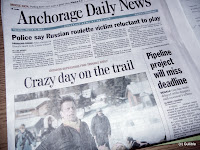 Fortunately, the water that backed up and overflowed the toilet was warm, which told me it was water from the hot shower I’d just taken.   I spent an hour cleaning up the mess and disinfecting the floor, but only after I’d eaten breakfast and read the morning newspaper.  I was sulking.
Then I worked the Cryptoquote and read the few comic strips I follow.  One, called Luann, is chronicling vain Tiffany’s beauty contest.  It reminds me of something that occurred while I was working on the construction of the Trans Alaska Pipeline, and I’ll be telling you about that soon.

That paper, the Anchorage Daily News, bills itself as the Good Morning Newspaper, and today it lived up to that claim.  I really needed it.
Page one had a story about the Iditarod Sled Dog Race that officially started Sunday.  Rick Swenson, who’s been mushing forever and has won several times, broke his collarbone on a vicious section of trail called The Steps.  The consists of steep downhills and uphills as the trail traverses gullies.
According to the standings this morning, Rick has made it into Rohn River checkpoint, which means he got through Rainy Pass and down the ferocious, infamous Dalzell Gorge.
Page two had a short article about Mike Tyson, the former boxer.  Seems Tyson has his own reality show called “Taking on Tyson.”  It airs on the Animal Planet channel.  This is where I deviate from my usual behavior and keep my mouth shut.
Another goodie was on page three, a story about a woman who tried to pet a moose in downtown Anchorage.  It kicked her.  Like, really?  Pet a wild moose?  She’s okay and so is the moose.  A photo shows it comfortably bedded down in Town Square Park and spectators strolling past.  You can’t get any more downtown than Town Square Park.

On page four was a short item about Joran Van der Sloot, notorious prime suspect in the disappearance of Natalee Holloway.  Van der Sloot was charged with the gruesome murder of a young Peruvian woman, coincidentally or not on the fifth anniversary of Natalee’s disappearance in Aruba.  He will plead temporary insanity in exchange for a three to five year sentence.

Question:  How long does temporary insanity last?
And finally, on the editorial page, is a letter to the editor about the recent Iron Dog snowmachine race that was paused for a short time because of severe weather.  The writer makes note of the fact that the first time a woman won the Iditarod sled dog race was during a dangerous ground blizzard that had some of the male racers holed up at a checkpoint waiting out the horrendous conditions.  The writer suggests women start racing snowmachines and show the guys how it’s done.
He also suggests changing the name from Iron Dog to Tin Foil Dog Race.

By the way, today is the 100th anniversary of International Women’s Day, something Google has taken note of.