What Was My First Clue?

I had everything ready to go for my trip to Germany.  I'd managed to keep the whole thing secret from Pablo Parrot.  I got my carry on luggage down the stairs from packing central (the spare bedroom) to the garage without him seeing anything or becoming suspicious.

I still had my stay-at-home clothes on when I went to his cage and asked, "Do you want to go?"  That's how I usually invite him to go with me up to the loft.  He stepped right onto my hand.  Then I took him down to the garage and put him in on top of his travel cage in the front seat of the truck.

So far, so good.  Now for the risky part--changing into going-away-from-home clothes.  But, shoot, he was in the truck wasn't he?  He knew he wasn't being left behind.

Then I slipped on my light blue fleece jacket and sat in the driver's seat.

Pablo said, "Grrrrrr!"   And attacked, giving me a nice nip on the forearm, which has turned into a rather impressive green today.   I jumped out of the truck.  He came after me. 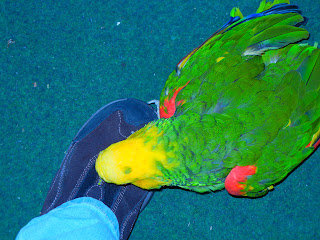 I went back to get a pair of gloves and he attacked my shoe.  Just for that, he had to ride in the travel cage instead of on top of it.

He growled at me for the first ten miles, then got rather pleasant.

We stayed at Patti's overnight, with Pablo ensconced in his big cage of the dining room table.

I woke up to four inches of new snow.

After that everything went okay.  A four hour layover in Seattle passed quickly.  I met a lady one her way back to Alaska from Mexico.

The flight to San Francisco went well.....and then everything fell apart.

First, I wandered around wondering what terminal United is in.  I was feeling pretty smug about passing up the baggage carousels because I had only carry on luggage.  The baggage gods were gonna get me for this.  Keep reading.

I wandered around looking for a restroom--which was closed. 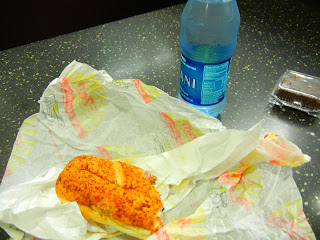 I found a nice corner booth where I would be out of the way in the Subway shop in case I decided to take a four hour nap, passing by a number of other nappers in booths.  I had taken one bite out of my Italian BMT with lettuce, ripe olives, spicy mustard and vinegar, when I discovered I didn't have my blue fleece jacket with me.  I stuffed everything in my purple bag, took the Red Line Air Train back to Terminal One, rode all the escalators down to the baggage level to the Alaska Airlines baggage claims office.  Which was closed.

So, I sat on the edge of the baggage carousel, ripped a page out of the Moleskine notebook and wrote them a note asking that they hang onto the jacket until I return on April 1.  Their office won't open until 6 AM, at which time I will be plummeting down the runway on a United 747, bound for Chicago.

Then I picked up the purple bag and slung it over my arm, and found the bottom was soaking wet because I hadn't tightened the cap on my water bottle when I scraped everything, including the Italian BMT, into the bag when I raced out of the Subway shop.  Up the escalators to the Blue Line Air Train just in time to hear an announcement that the Blue Line was out of order and I should take the Red Line.

The Red Line is the milk run to the edge of the earth and back and I rode and rode and rode.  Just at the last stop before Terminal Three, I saw the Blue Line train alive and well and loaded with smirking passengers on the next rail.

Okay, may be they weren't smirking at me.  Maybe they were really baggage handlers enjoying the little trick they'd played on me.  Right about then I realized that this whole trip was out of my hands.  There was nothing I could do one way or another to control what was going to happen.  I may as well sit back and enjoy the discombobulation.

By the time I returned to the Subway Shop, someone had landed in my corner booth and was sound asleep. My Italian BMT with spicy mustard and vinegar was soggy on one side and hard on the other.  Now I'm in a middle booth with nappers on either side.  At least no one's snoring.

So, here I am with a big green bruise on my arm, highlighted with two red triangles in the middle of it, heading to Germany in the winter with no jacket.

You realize what all this means, don't you?

I'm going to have to do some shopping in Germany....
Posted by Gullible at 2:30 AM