The Litter Notes for June 4: A Rainy Evening in Turnagain Pass

I worked yesterday, delivering and picking up mail in Moose Pass, Hope and Cooper Landing.  When I returned home in mid-afternoon, I fielded a few phone calls and then considered my options.

I could take a nap.  That would guarantee I would toss and turn that night and then sleep too late Sunday morning.

If I stayed home, I would, without doubt, eat everything in sight.

Or, I could go litter-picking.  In the rain.

I made up my mind while I was standing in the kitchen, yawning and staring into the open refrigerator:  I laced up my hiking boots and headed for Turnagain Pass.

When I first started this far-from-home litter picking thing, my neighbor said he was going to make sure I received some public recognition.  He was, at that time, president of the local community club, and could indeed have accomplished. that.  I begged off, explaining that recognition might turn it into a feeling of obligation and take the fun out of it.

Now, five years later, I have long since passed through obligation and am deep in the throes of obsession.


Why else would I spend six hours in the rain alongside a busy highway, filling nine bags with litter of various kinds? 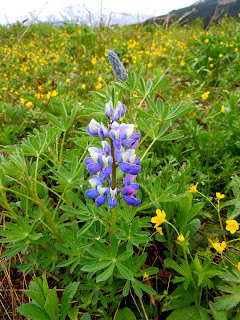 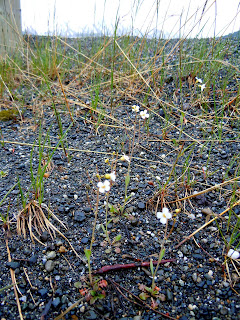 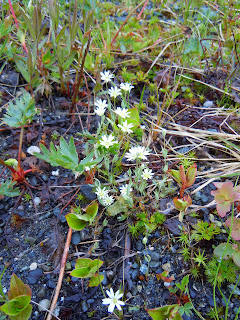 That's why.  It's early yet, but in two weeks, this entire alpine pass through the Chugach Mountains will be carpeted with dozen of varieties of wildflowers.

I have reached the rest areas in Turnagain.  This is usually where I stop, but last  year I headed downhill to saltwater at Ingram Creek, another eight miles farther.  I haven't decided whether to do that this year, butu I probably will.

As of yesterday, I've walked and cleaned thirty-four miles through the Chugach National Forest.