(NOTE:  There will be one more Yosemite chapter after this one, so enjoy them while they last.)

Those folks I went camping with in Yosemite last month are big on birthdays.  This trip coincided, intentionally, with two momentous birthdays.  Both Julia and Norman turned 70 while we were there.

Kathy also would celebrate a birthday later in June.  Her 29th she says, but I know for a fact that’s she older than I am, and I’m 34.

Anyway, birthdays are celebrated in this group, as I said.  Earlier in these journals I mentioned that the lack of underbrush in the campgrounds allowed us to see what our neighbors were having for dinner.  One night we noticed a group of healthy young studmuffins men ate only hot dogs and granola bars.  Katy offered them the rest of our chili and they came over and accepted with gratitude and grace, which gave us an ever closer view of their attributes..

So, with all that openness, you can imagine what other campers thought when late one afternoon we all donned silly hats and played even sillier birthday games, acting like a bunch of six-year-olds.  And this was all done BEFORE the almond champagne.

First came a game of seeing who could pitch a plastic dart the farthest, using a launcher powered by a rubber band.  Kathy was the one who discovered the wrist flicking technique and soon the Lower Pines campground was in danger of being bombarded with UFOs from the Upper Pines grounds.

Then it was on to table croquet, a particularly annoyingly simple-looking game of knocking a wee ball through wickets with a plastic mallet.  On a wrinkled plastic table cloth.

We attempted to pitch balls into holes in a moving plastic sheet.  Soon we were knocking down foam cups with a paddle ball.  I forget the rest—the games were endless.  My friends do not lack for imagination.

But the best was saved for last, and I’m not yet talking about the almond champagne.

The very best game was racing cars on the asphalt lane through the campground with balloon-powered cars.  I could have played that one all day.

Then the pink cake boxes were retrieved from the steel bear boxes where they had been fermenting baking for several days. 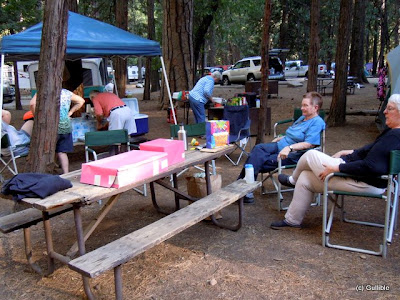 Kathy’s cake for her 29th (!!!) birthday looked a bit the worse for its time in the bear oven.  We decided that its proper place would be in the bear-proof dumpster because it contained ingredients known in California to be harmful to your health when subjected to days of high temperatures. 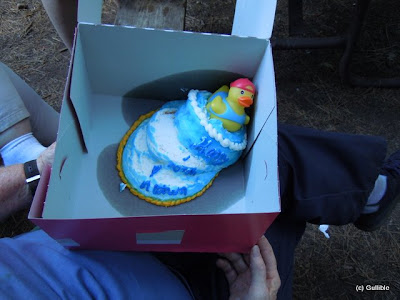 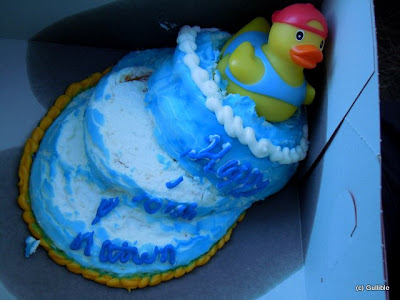 That left the big sheet cake for Norman and Julia’s birthday.  It was in fine shape, and apparently made of indestructible ingredients not known in California to be harmful to your health after being subjected to days of high temperatures. 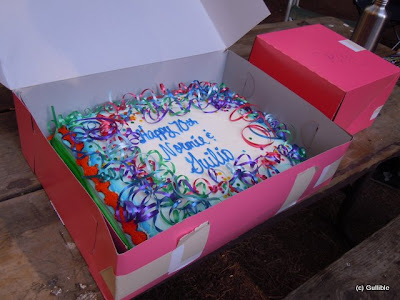 So, we ate as much as we wanted, then toasted Julia, Norman, and Kathy with almond champagne.

Then Julia and Kristy gathered up the leftover cake, a knife, and paper plates.  Off they went, offering birthday cake to everyone in the campground until they ran out. 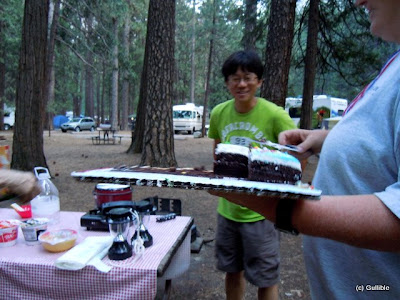 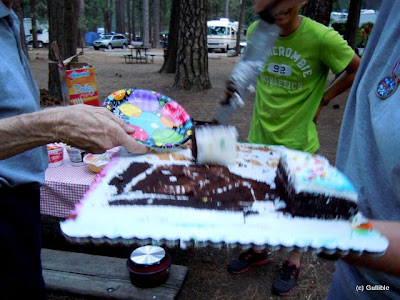 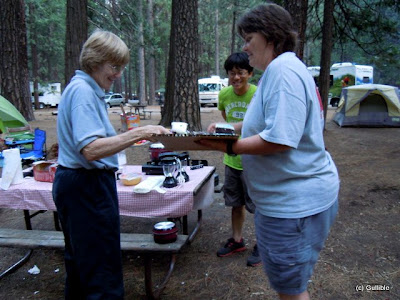 Such a birthday party I’ve never before seen.  Totally awesome, except for the almond champagne.