Down at the Devil's Elbow in Yosemite Park one afternoon, the Mallard Family and the Swallowtail Butterfly were doing their best to keep us entertained, but the real drama was a bit higher than this bend in the Merced River, in which and over which ducks and butterflies were competing for our attention. 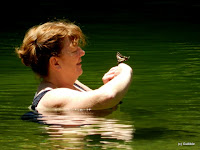 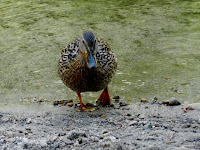 Actually, quite a bit higher, because across the river and through the trees people with death wishes were climbing like geckos up a massive three thousand foot high chunk of granite called El Capitan.  In the photo below, there is a group of climbers slightly above and to the left of the middle tree (the largest pine) in the group of three tall trees at the left of the photo. 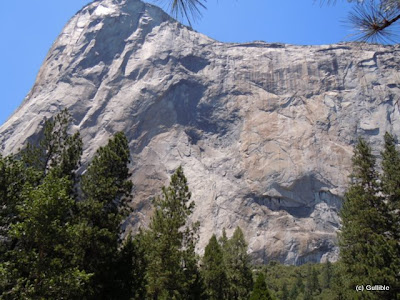 While my brain-baked California friends were freezing their tootsies and other body parts in the clear water, I was in the shade, comfortably ensconced in a folding chair with binoculars and cameras with 30X optical zooms glued to the almost vertical face of that well-known climber's paradise. 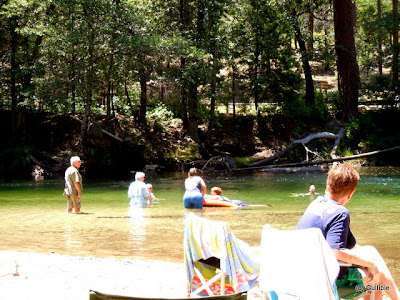 This photo will help you locate the climbers on the face of El Capitan.  The portion of tree is of the largest pine.  Just a bit higher and to the left is a curved shadow.  Two of the climbers and their gear are there, while the third climber begins making his way higher, slightly to the left of the two waiting climbers. 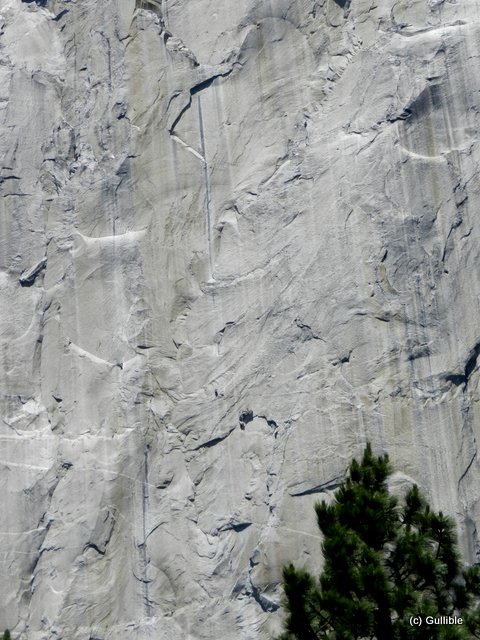 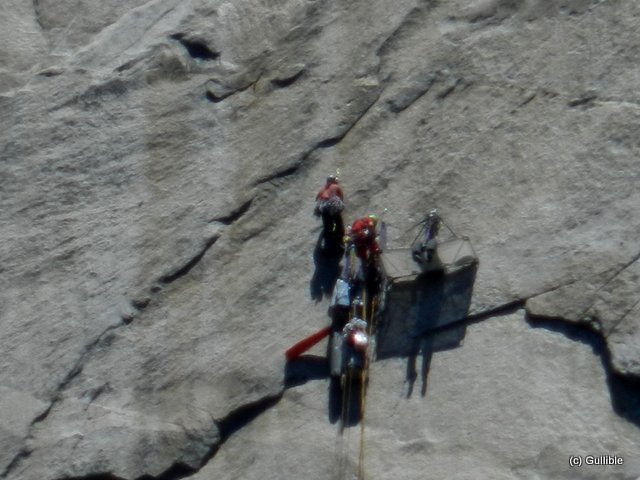 I think there were three climbers in this group.  In the photo below, one climber begins working his way higher while the other two wait with their gear.  The rectangular shape is, I believe, a platform that the climbers suspend and sleep on. 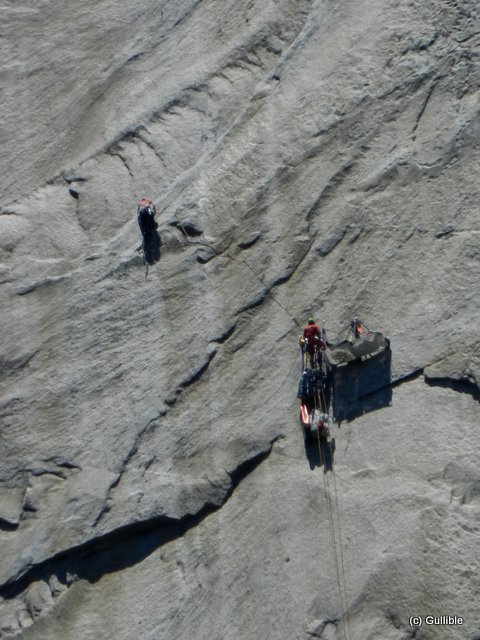 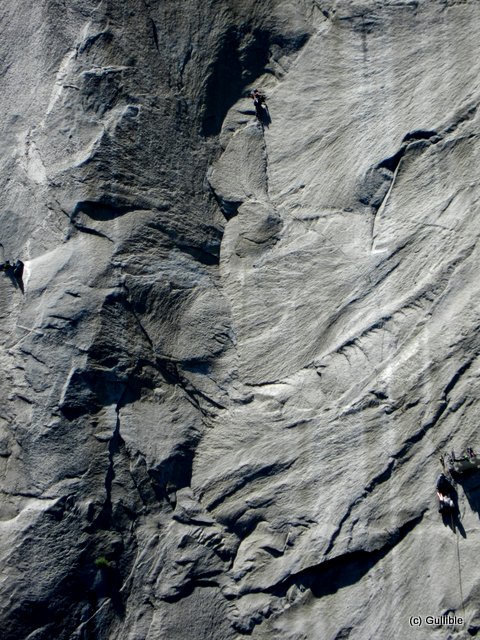 Now the second climber begins his ascent.  The first climber is tied off and waits, and the third climber remains with the gear.

The second climber nears the first. 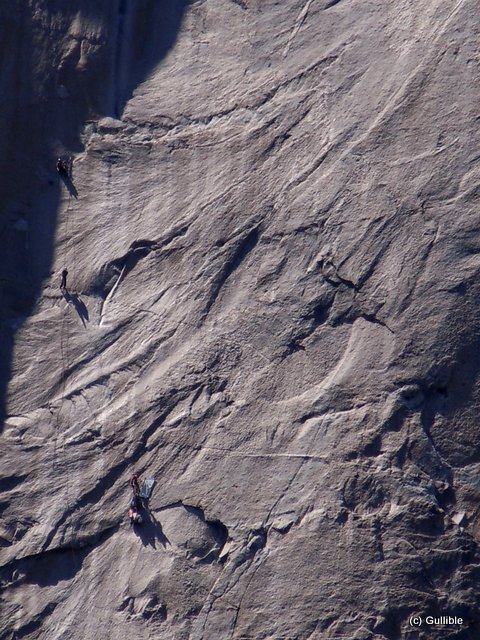 While Mrs. Mallard paraded past with her ducklings, other climbers were working their way up farther to the right. 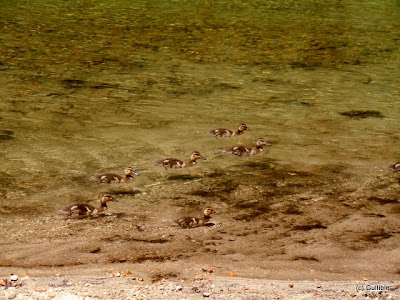 In the photo below, this group of climbers is almost directly above the middle tree in the group of three tallest pines.  The first climber is making his way to the curved shadow almost at the top of El Capitan. 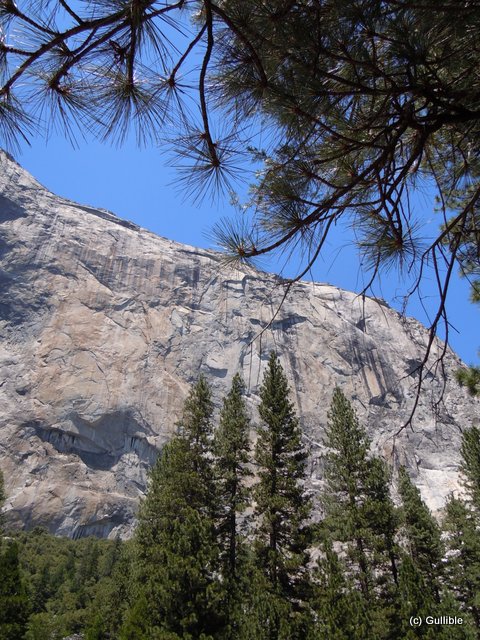 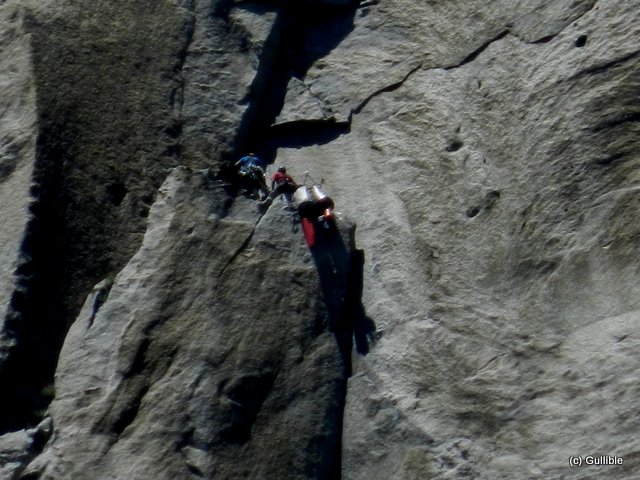 The highest climber has reached the crescent-shaped formation and is attaching ropes to haul up the gear. 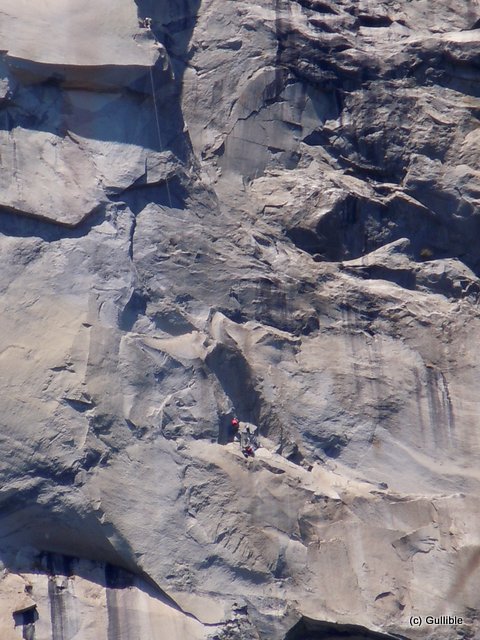 Then, he rappells down.  Not me.  Once I got that high, that's where I'd stay.    Follow his rope from the projecting rock in the top center, and you'll find him to the left and slightly higher than his waiting buddies. 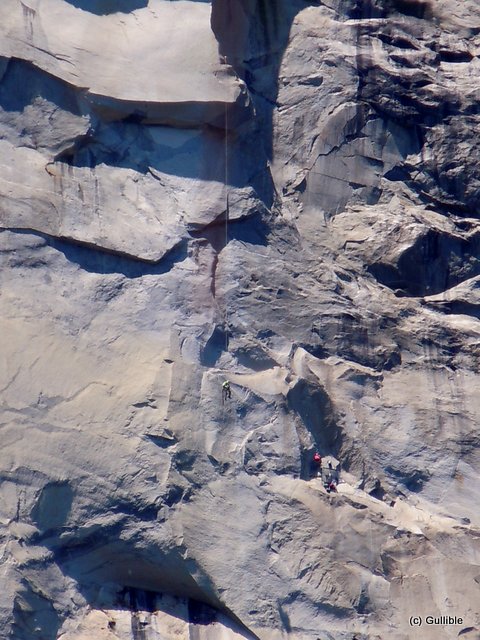 Farther down, back in those three tall pines, a climber from another group heads up. 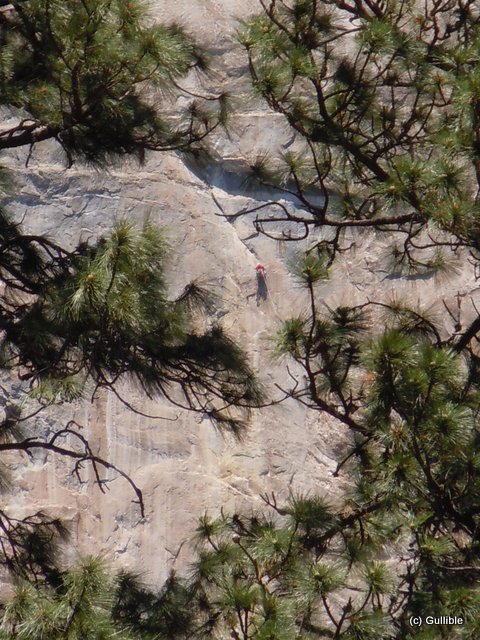 The next night, we drove back to a meadow near where these photos were taken.  Using flashlights, we made our way out into the meadow on well-worn paths, where we joined other folks with flashlights.

The below photo was taken at night, in the dark, but with exposure allowing El Capitan to be visible.  Note the center "spine" of the buttress. 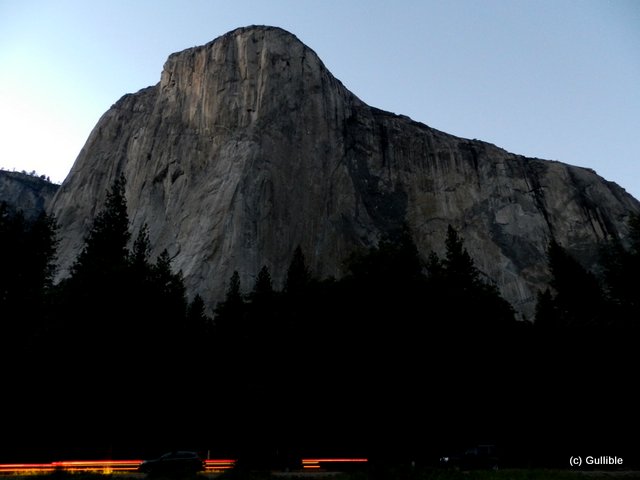 We pointed our flashlights at El Capitan, and pinpoint lights appeared in two places.  The climbers, tied in for the night, were signaling back.  We lingered for a while, shining our lights and thinking about those climbers so high on an almost vertical face, and searching for other climbers' lights.

Then we turned off our flashlights and headed back to our camp site, where our sleeping bags were on cots close enough to the ground that we wouldn't get hurt if we fell out of bed. 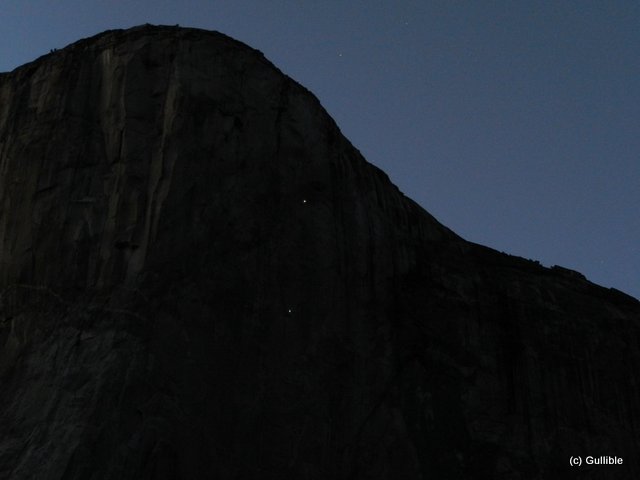 You know that old expression about "friends in high places?"  Well, it's also true that when you're in a high place, you'd better have a friend with you.

PS:  Little did we know that while we were enjoying the sumptuous buffet at the Ahwahnee Lodge on Father's Day, Hans Florine of Lafayette, Calif., along with his climbing buddy Walex Honnold of Sacramento, were setting a new speed climbing record up The Nose of El Capitan.