The Antarctic Journals, Chapter Eleven, A Malvina by any Other Name Would Still be a Falkland


A Malvina by any Other Name is Still a Falkland

It would be a much simpler world today if the Falkland Islands had just stayed put.

But, no, when the super continent of Gondwana broke up and started parceling out continents and tectonic plates and scraps of land around the globe, what became the South American tectonic plate took off westward.

As did the Falklands, becoming an archipelago on its own geologic platform.  The problem is they didn’t separate enough.  A little globe I bought for 25 pesos from a street vendor in Buenos Aires explains why: 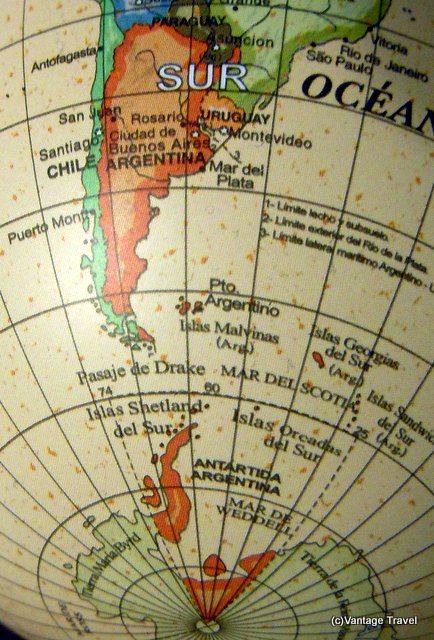 Note that Argentina, in orange, claims the Falklands, South Georgia, the Antarctic Peninsula, and everything  south, as well as a slice of the Antarctic Continent.  The United Nations Convention on the Law of the Seas stirred the stuff when it prescribed an exclusive economic zone (EEZ) that allows states to have special rights 200 miles seaward from its shores.  Two hundred miles from Argentina’s shore happens to overlap the Falkland’s 200 miles, and so on.

The French started it with a small settlement in 1698.  But then, there is that wee curiosity about the canoes found on the islands.   Maybe flotsam from the tribes in Tierra del Fuego?


The French named the islands Maluines.  They left and Great Britain established a crown colony in 1765, but later gave the islands to Spain, which translated the French name into Spanish—Malvinas.

Argentina claimed the Malvinas (Falklands) after it won its independence from Spain, on the basis of the islands being in the Argentine Sea and inside the Argentine continental shelf.   Argentina established a colony in the Malvinas.

Then the British came back and took it back, ousting the Argentines in 1833.  Ever since then, there has been a British colonial government on the Falklands.

Notice how I keep changing back between Falklands and Malvinas?

This is how to be politically correct when you’re dealing with the British or the Argentines:

If you’re talking to someone on the islands or to a British subject, you say Falklands Islands and the capital city is Stanley.

If you’re talking to an Argentine, it’s Malavinas and Puerto Argentino.

In mixed company, it’s best to play it safe and not use proper nouns.  Instead, say the islands and the capital city.

(If you don’t think you can keep them straight, not to worry.  Neither can our president:  http://www.dailymail.co.uk/news/article-2131359/Barack-Obama-makes-Falklands-gaffe-calling-Malvinas-Maldives.html)

Look, they fought a war over this in 1982 and it’s still a sore subject, especially in Argentina because they started it and the British ended it as the winners.  More on this later in these journals.

Nowadays, the islands are populated by 2200 more-British-than-British residents and probably an equal number of Land Rovers.  Those four-wheel-drive vehicles are manufactured in Britain, of course.  Also on the islands are around 1000 British “service agents” garrisoned at a military base.  And sheep.  And penguins and cormorants and albatross.  Plus, lots of land birds.


More about this later.  Let’s set foot on land now and see what’s there.


After a moderate walk across the island, in rain falling sideways, I finally reached the stopping point.


If you’re wondering why I posted all these penguin photos with information about continental drift and tectonic plates, there are two reasons:

1.  When the Falklands slowed down and hovered where they are, they became the perfect penguin habitat, and,

I I took about 2000 photos on this trip, most of them of penguins, so I need to stick them in somewhere.  Besides, they’re cute.
Posted by Gullible at 7:25 PM