The Antarctic Journals, Chapter Fourteen, Bumps in the Road

The Antarctic ice is not far away.   The day after leaving the whaling station of Grytviken, Endurance encounters numerous icebergs.

The following day, Dec. 7, 1914, brings the ship to the edge of the pack ice.  For the next six weeks, Endurance batters its way through loose ice, sometimes pushing bergs out of the way and sometimes skirting them altogether.

The crew particularly enjoys watching when the bow of Endurance smashes straight into a berg.  There’s a pause, the ship shudders, and then the ice parts with a long crack and the ship steams into it, further wedging the ice apart.

Eventually, the entire sea is covered with ice and open leads are hard to find.  On Christmas Day, the crew celebrates with mince pies and Christmas pudding.   Afterwards they sing songs, always enjoyed by the men—except when the Scots stay up singing after the rest of the crew has gone to bed.

The dogs are taken off the ship for exercise when Endurance finds a strong pan of ice, and photographer Hurley takes advantage to get pictures of the crew, dogs, and Endurance.  One of the dogs gives birth to pups.   Irish crewman Tom Crean  takes charge of the puppies.

When the ship find patches of open sea, the men marvel at the exquisite blue of the underwater ice. 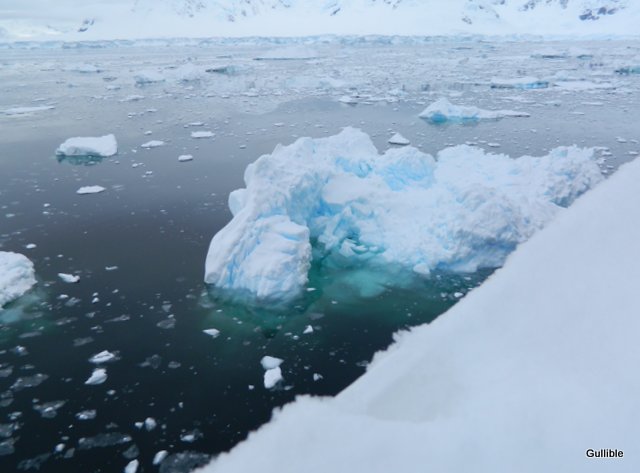 The going is slow because of the ice.   Often the ship stops and waits for winds to open leads.   But here in the Weddell Sea, the ice rotates in a clockwise direction because of the prevailing winds, trapped in a barely moving whirlpool of huge bergs and pressure ridges.  When Endurance waits for open water, she is moved away from land, rather than towards it.

By mid-January, there is little progress.  When a lookout in the crow's nest spots open water, all sails are hoisted and full steam ordered.  The men chop at the ice to free Endurance.  Sometimes progress is made and sometimes not.  A gale blows up and with thick ice ahead, Endurance takes shelter from the northeast winds behind a large grounded iceberg.

On January 18, 1915, a gale breaks up the ice and Endurance makes a 24 miles run before encountering thicker brash ice and floes.

Gale-force winds pick up again and northeast winds pack brash ice around Endurance.  At midnight on the 24th, open water can be see 300 yards ahead, but she is unable to break through.  The skies clear, bringing much colder temperatures and freezing the loose ice together.


All black and white photos by Frank Hurley, courtesy  of 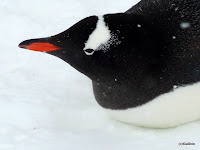 The winds are whipping the sea into frothy white caps as the Fram makes an overnight trip across the northern edge of the Falkland Islands.  Those seas bring the sea birds back and before dark we see the familiar Cape Petrels flying in formation around the ship, sometimes just inches off the waves.  They fly for hours, never flapping their wings, but use the air currents that mimic the waves.

It's too windy to go out on deck, so I shoot pictures through the tinted windows of the Fram.


These blue photos remind me of the calm sailing off the Argentine coast, and a sunset picture I took while on deck. 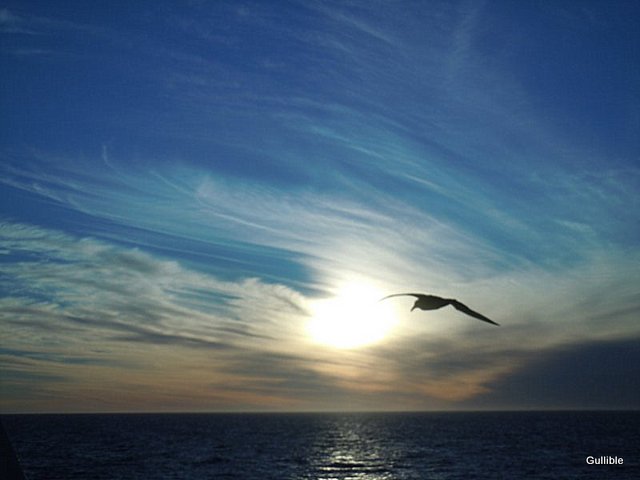 We have choices to make on this short trip.  Most travel tours offer optional tours at various ports of call, and so does the Fram.  There are three available to us in Stanley, capital of the Falklands, and there's time for only one as they occur concurrently.

There's a bus tour of the highlights of the town, a guided nature walk, or a Land Rover tour to Bluff Cove Lagoon where we can see penguins.

Penguins are nice, I think, but what a choice.

Kathy and I read more about the Bluff Cove tour.   It offers complimentary tea, coffee, hot chocolate and goodies at a small café on the moors.  It is called…are you ready?....the Sea Cabbage Café.

That did it, we decide.  Have to go see something called the Sea Cabbage Café.  We sign up even though it’s a bit pricey at $160 US.

The Fram ties up in Stanley Harbor and disgorges the blue-backed tourists, who are dressed for the weather at the moment.  The folks here are fond of saying you can experience all four seasons in an afternoon.  Or, sometimes in an hour.  For our afternoon in Stanley, 40 knot winds take precedence over all the seasons. 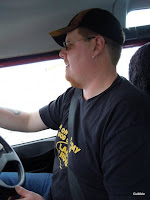 We are met at the gangway by a line of Land Rovers and Kathy and I climb into Michael’s spic and span four wheel drive vehicle.  Twenty minutes later, Michael goes crazy and makes a sharp left turn off the lovely pavement.


Now we are bouncing across the moors, and yes, there are other crazy drivers in Land Rovers doing the same thing.  A gazillion bumps and bogs later, the Land Rovers pull to a stop, all lined up like wagon trains circling for protection. 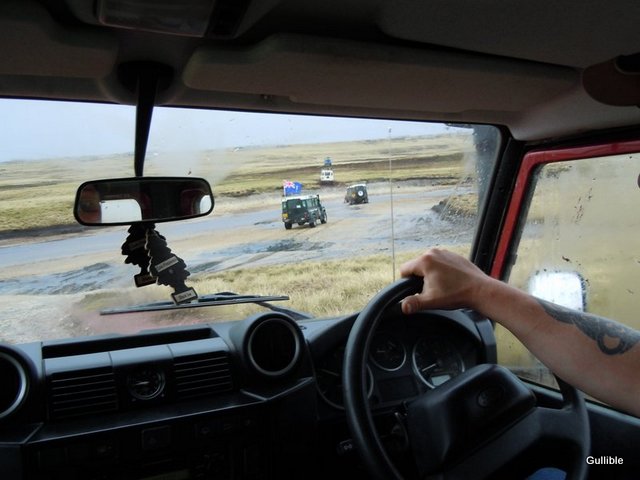 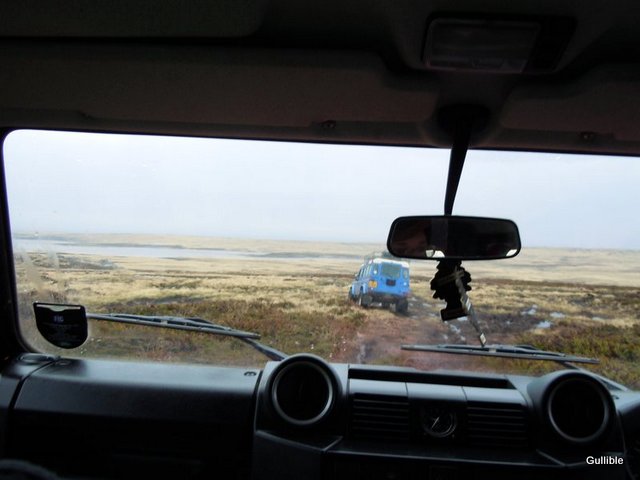 And there are the penguins…somewhere in the sideways rain and mud.  Flags are set out to keep us from intruding into the nesting rookery. 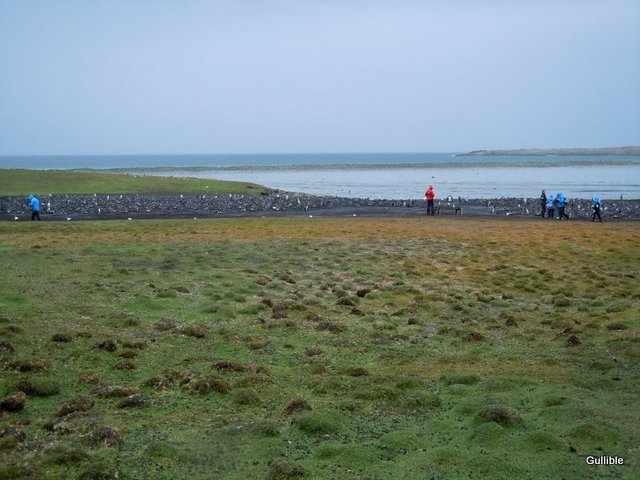 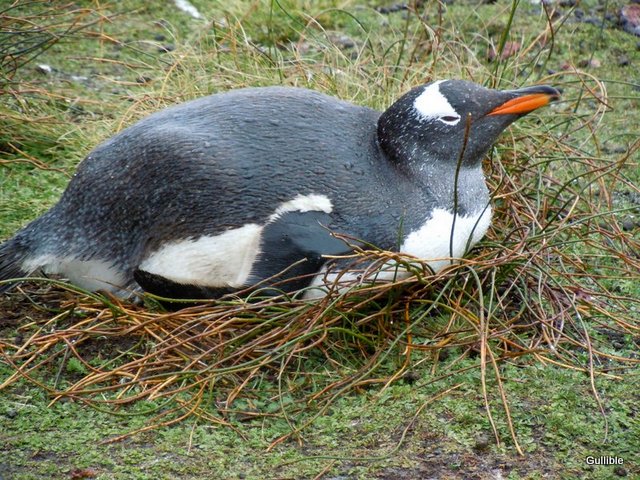 On the far side, I find an oddly-colored penguin.  It’s called a leucistic penguin, its coloration caused by pigmentation cells failing to develop properly.  It’s a form of albinism.


I head over the moor where I see others going, and there, in the lee of a grassy bank, is the Sea Cabbage Café.  Inside, my glasses and camera lenses immediately steam up.  I leave the dripping parka on a chair back and walk to the counter where the friendly Falkland ladies are serving hot tea and goodies. 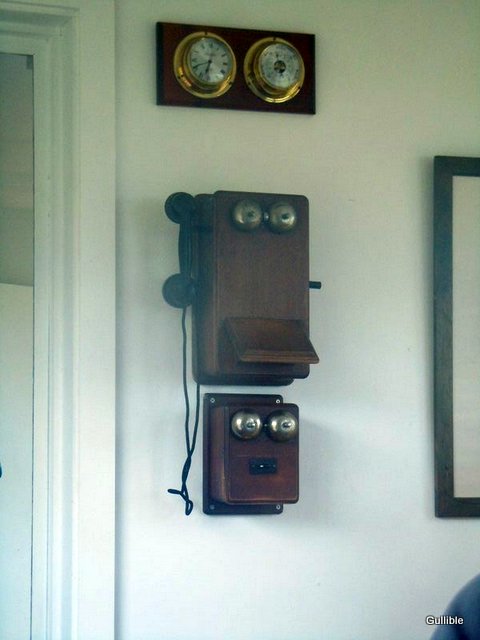 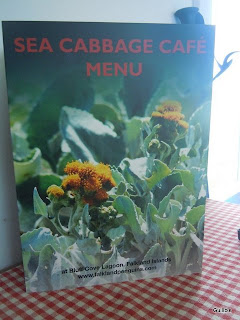 Before heading to the gift shop next door, I went into the bathroom.  Something told me to take my camera.  This is why:

I make a quick trip to the gift shop for postcards and ..... 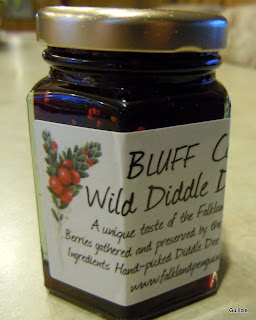 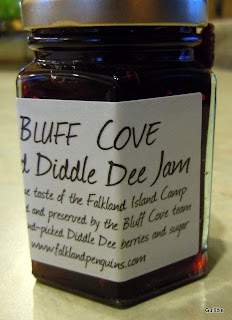 Eventually it’s time to go out into the wind and rain and find Michael and his now mud-splattered Land Rover.  Then it’s a gazillion bumps and bogs back to the pavement, where we are right across from one of the geologic enigmas on the island--the stone runs.


Once back in Stanley, Michael offers to drive us anywhere we want to go, give us a sight-seeing tour.  He makes a spin around town, pointing out various landmarks and points of interest, then drops us off at the tourist bureau, where we will meet the shuttle bus to the ship.


We're enjoying our excursion and our time in Stanley, but little do we know that our Three Gauchos from Argentina are demonstrating in front of the British government building.

Will there be an international incident over this?
Posted by Gullible at 9:17 PM