After nourishment, shelter and companionship, stories are the thing we need most in the world.
― Philip Pullman

My time in Africa is coming to an end.  There will be no more safari drives to see wild animals, no more time travels into history, no more dining on exotic foods.   Our coach will now take us to the final destination on our itinerary, one of the most famous gardens in the world, known as Kirstenbosch Botanical Gardens.

We leave Hout Bay after our seal-viewing boat returns safely to the dock and board the coach.   As we leave the town, Brian tells us a story.

There is, he says, a reclusive man who lives along the coast many, many miles from here.   He is called  The Seal Man and probably is known by more seals than humans.  Sick and injured seals often travel vast distances to see him, knowing that he will treat their illnesses and heal their injuries. 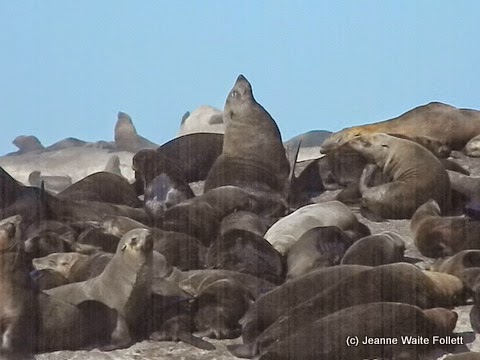 How the seals know to visit the man is unknown, except that healthy seals often escort ill seals to him.  There is very little information available about him, and I’ve searched the internet several times.   If I never find a word about the man, I am happy that he is there tending to the seals. 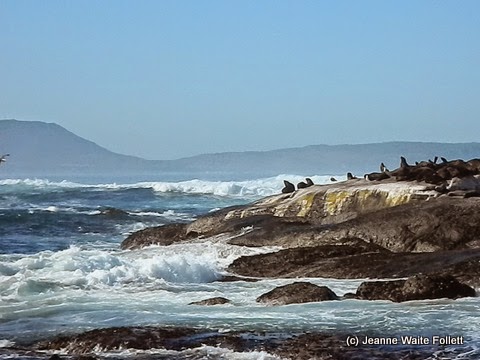 On a drive through Simon’s Town on the Cape Peninsula, we pass a small park called Jubilee Square and Brian points it out, though not soon enough for me to get my camera ready.   Through the autos and tree branches, I catch only a glimpse of a bronzed statue commemorating Able Seaman Just Nuisance.

Odd name for a seaman in the British Royal Navy, don’t you think?  What’s even stranger is that the seaman was a dog—a Great Dane, specifically.

Just Nuisance was whelped in April, 1937, in a suburb of Cape Town, then sold to Benjamin Chaney, who moved to Simon’s Town to run the United Services Institute there, which was patronized mostly by British sailors from the British Naval Base in the town.   Treated to tidbits and affection, the sailors became the dog’s favorite and it would have nothing to do with men from the other services.  He could recognize sailors by their square collars and bell bottomed trousers.

Just Nuisance took to riding the local electric train with sailors on liberty heading for Cape Town, and then riding the train without the sailors.   If kicked off by the conductor, the dog would wait patiently for the next train and board it.  Eventually, the Navy bought the dog a season pass to ride the train, and Just Nuisance began escorting inebriated sailors back to their bunks at the naval base, sometimes even if they weren’t stationed there.

The HMS Neptune was one of the dog’s favorite ships and lying down at the top of the gangplank was his favorite spot.  Because of his size, the huge dog was difficult to get past and “loathe” to move.   His name came from many sailors saying, “You’re just a nuisance, why do you have to lie here of all places?”

In October of 1939, Just Nuisance was inducted into the Royal Navy and as a volunteer during wartime, he was allowed to ride the train for free.   Postcards of Just Nuisance wearing his sailor’s cap were sold to raise money for war bonds.

Just Nuisance was no perfect seaman and his record lists offenses such as losing his collar, riding the train without his free pass, sleeping on a bed in the Petty Officers’ dormitory, and refusing ejection from the Sailor’s and Soldiers’ Home.  He would, however, insert himself between two fighting sailors and thereby end the fisticuffs, thus saving the men from bodily harm.

Alas, such large dogs live short lives, and Able Seaman Just Nuisance was put to sleep when it became obvious he was slowly becoming paralyzed from thrombosis, results of injuries sustained in a motor vehicle accident.  In 1944, he was buried in a solemn ceremony complete with a rifle salute by Royal Marines and a lone bugler.  A granite gravestone marks his grave.