Mongolia, A Report from the Field: In Praise of Plans that Go Awry


Yusef returns to car and says, “There’s no ATM there.”
We don’t understand at the time why he needs an ATM, other than the obvious reason.   Later he explains to me that Genco did not transfer the necessary funds for this trip into his account until after we left earlier this morning, and he needs cash to pay for our lunch.

We drive a block or so and wait in the car while he tries another ATM.  “It’s broken,” he reports.  A small herd of cows appears and wanders down the street.   At the end of the block I see a cow jump up into what must a decorative planting in a triangular intersection.   A uniformed worker chases the cow out of the plants.

We're on our way to "the lake."   This is to be a six-day guided trip to a place everyone says is really nice and worth the two days up drive and two days back drive.   This is our first day. 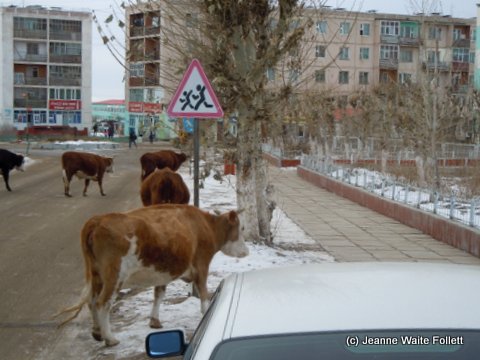 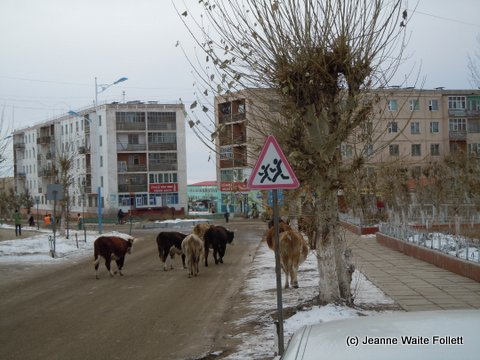 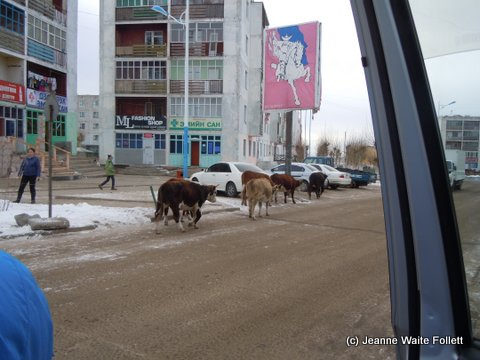 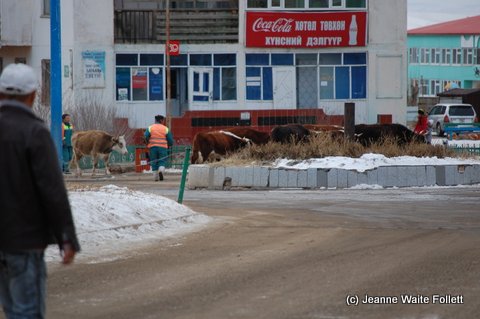 Yusef leaves to try again and this time he is successful.  We head for a nearby restaurant.   It’s closed.

We try another.   It is also closed.

“We try to take our guests to nice restaurants,” he says.   "The only thing left is a small café for the locals."   He sounds apologetic.

This town called Khutul has Russia written all over it, most likely because it was built in 1977 by the Soviets to support the nearby lime and cement mines.   Five story buildings called Khruschchev apartments are all over the place, each as dreary as the next. 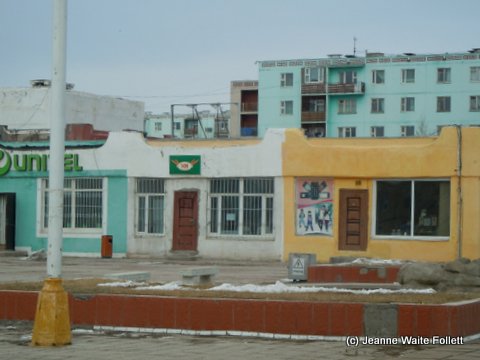 After Joseph Stalin’s death in 1953, Nikita Khruschchev’s regime embarked on a program of urbanization.   To relieve a critical housing shortage, cookie-cutter building projects took place to provide housing with  quantity over quality.   Many of the so-called apartments were communal, with as many as seven families each having its own small room, and sharing the kitchen and bathroom.


Most of the apartments had narrow balconies, some enclosed, some not.  Apparently  there were no covenants as to the use of those balconies, and with no uniformity, the buildings soon came to resemble slums with a variety of different materials used to enclose the balconies.   Laundry was hung to dry and eventually air conditioning units were hung haphazardly in windows.

The buildings are instantly recognizable in countries once associated with Russia and the Soviet era, though many are more than five stories. 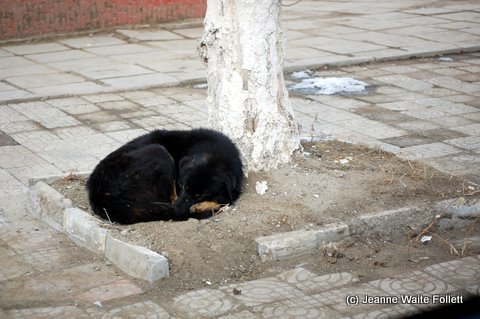 We arrive at a humble gray apartment building and enter a shop on the lower level.   What a surprise!

Inside is a cheery, warm room with two or three tables and a fancy  wooden counter.  We have caught the two women by surprise, but they are gracious and welcoming. 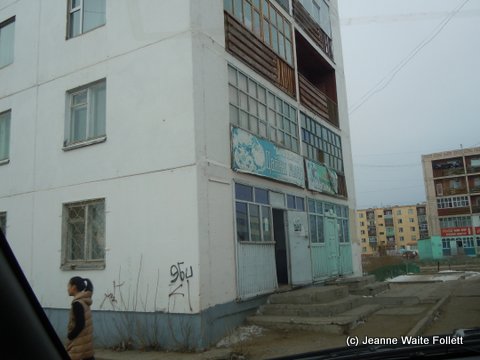 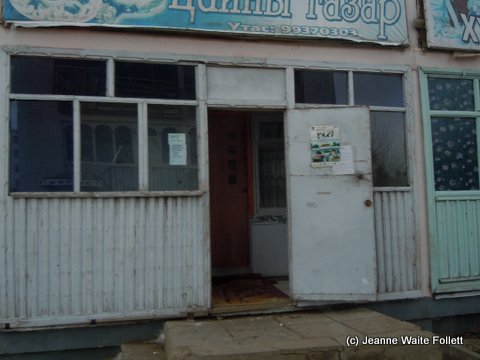 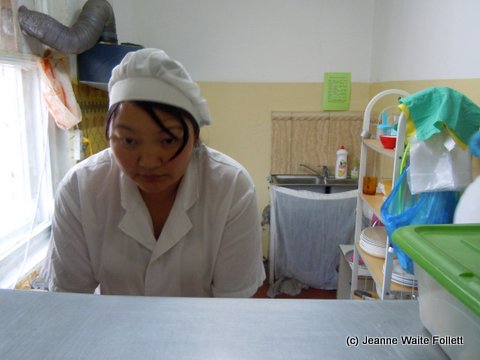 Of course the menu is all in Mongolian, and Yusef translates for us.

Patti and I both order potato salad.  Chimdee has his order in first—fried horse meat with sheeps’ tails.  Cap orders fried beef with potato salad, and Yusef wants fries with scrambled eggs.   And milk tea for me. 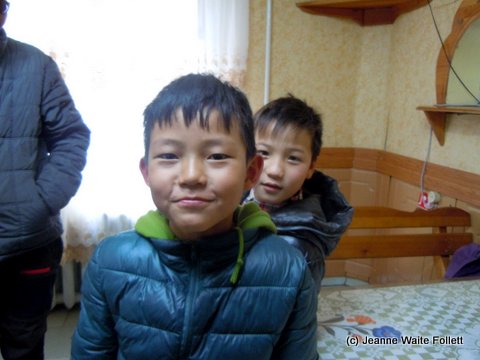 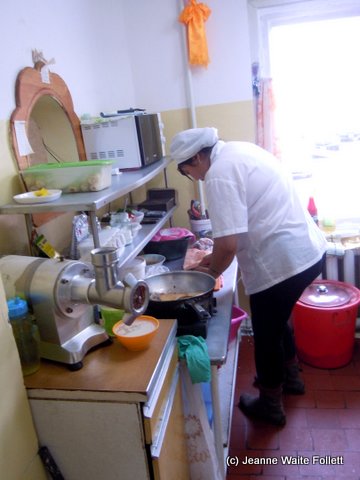 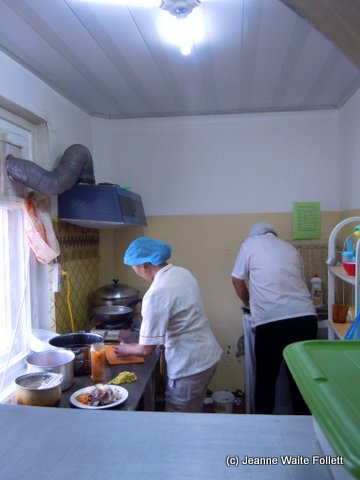 They let us use a small restroom adjacent to the kitchen.   There’s a bucket in the sink that catches water from a dripping faucet and apparently that’s how you flush the toilet because there isn’t any other way.  As I exit the bathroom, one of the women is peeling potatoes for our lunch. 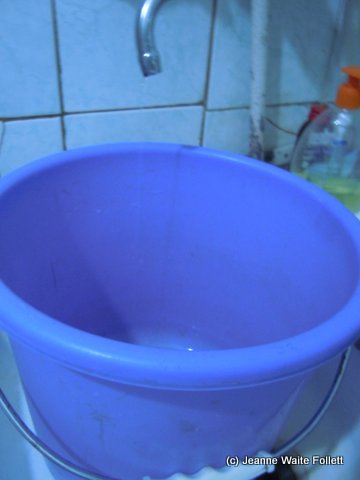 The food is delicious!   This little café is a hidden gem in a dreary town.   We tell Yusef we want to stop here on the way back.

We get in the vehicle after lunch and as we wait for everyone to get settled, I watch a couple boys across the street.  One hits the other across the chest a few times with a stick, not hard, but hard enough, then goes around the corner to join a group or boys with toy guns. 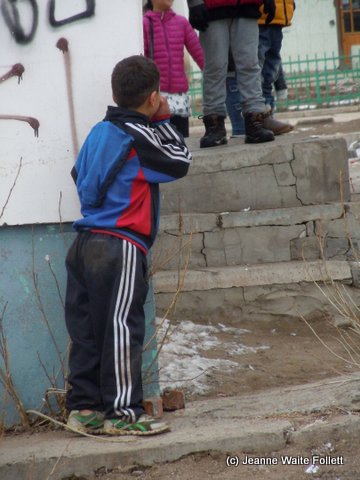 The boy who’d been hit peeks around the corner of the building and picks up a rock.   He bides his time, checking once in a while to keep track of his prey.  When the group wanders off, the boy pitches several rocks at his tormentor, none coming close.

And then we drive away. 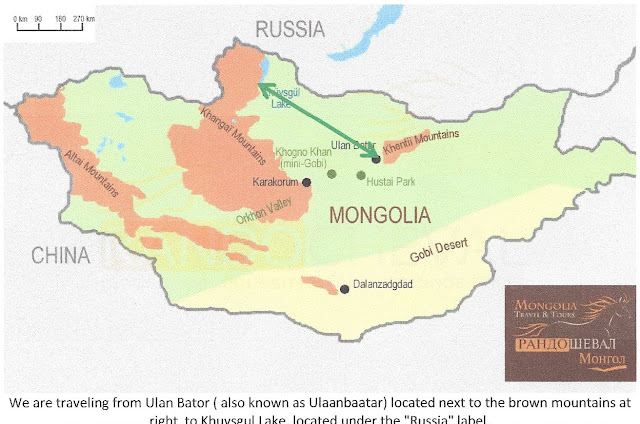