The Kenya Journals, Ch. 5: Those Troublesome Teens on the Masai Mara

Chapter Five: Those Troublesome Teens on the Masai Mara

(“Visitors, you are welcome here.”)
Lyrics from Kenya pop song

Greg organized this trip with photographers in mind.  His prerequisite for our lodging was that the camp would allow only three passengers per safari vehicle.

That means each of us has a whole row in the Land Rovers to himself/herself, making it easy to switch from side to side as the photo ops arise or the sunlight requires.  Allowing this means a loss of income for the operators, because the safari vehicles usually put a person in every seat, with two and sometimes three across.

So, we leave Mara Intrepids at 3:15 on our first afternoon in two vehicles and head out onto the savannah in search of critters.   No sooner do we exit the gate than I spot a huge male eland enjoying a slice of shade atop a nearby rise.   Photo time.  The photo turns out to be slightly more than a silhouette because of the distance and direction of the sun, but I am happy. 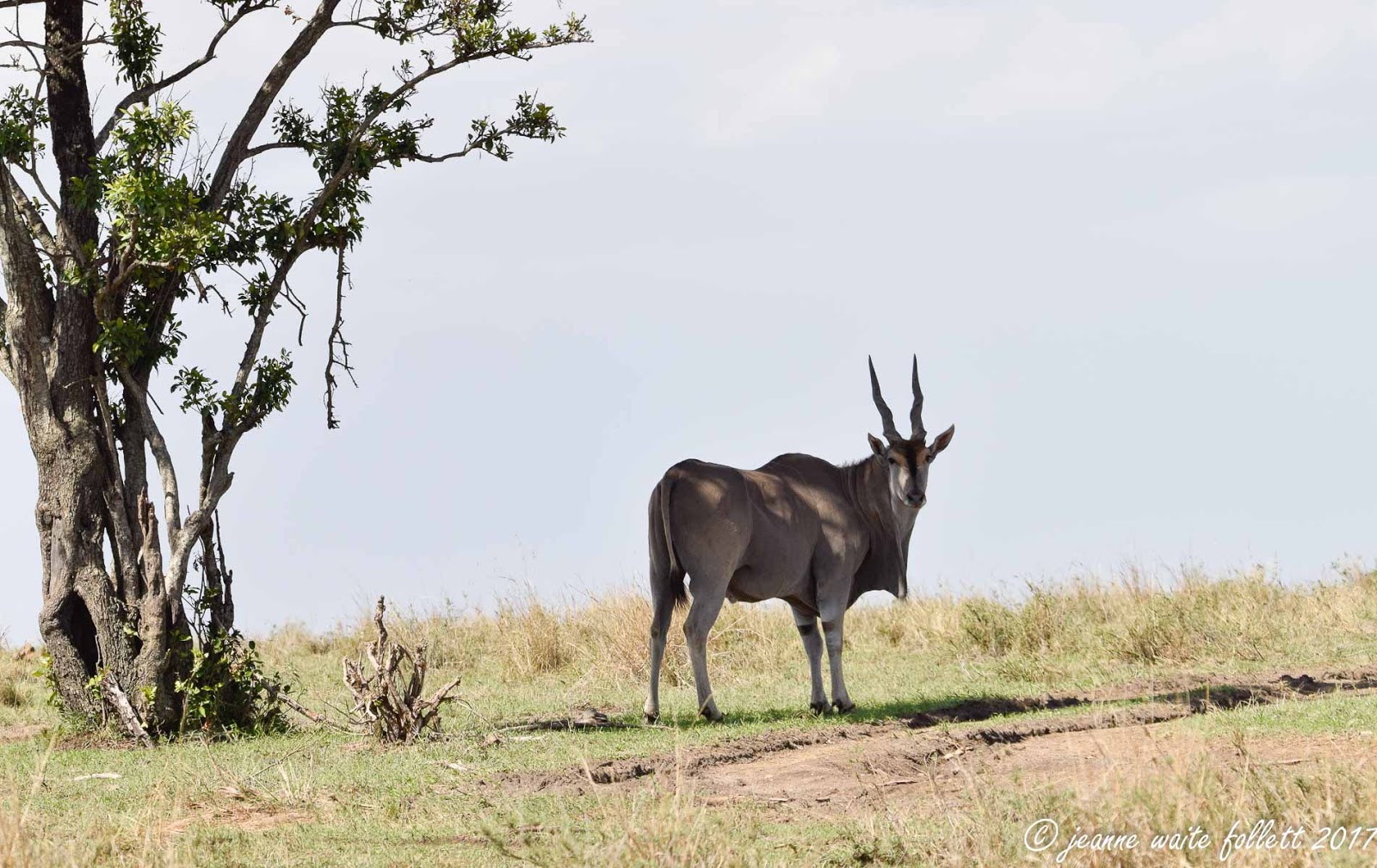 Elands are the largest antelope in Africa.  Male are five feet at the shoulder and can weigh up to 1300 lbs.   Females, of course, and smaller and lighter.  The giant eland is larger than the common eland, but I can’t tell which this one is.

Our guide/driver Dennis takes us to an area where we saw vultures circling on the trip into the camp.   The first thing we spot are hyenas—muddy, wet, stinking hyenas.  Then we see vultures and a Maribou stork on a rotting hippopotamus carcass.  The stench is terrific. 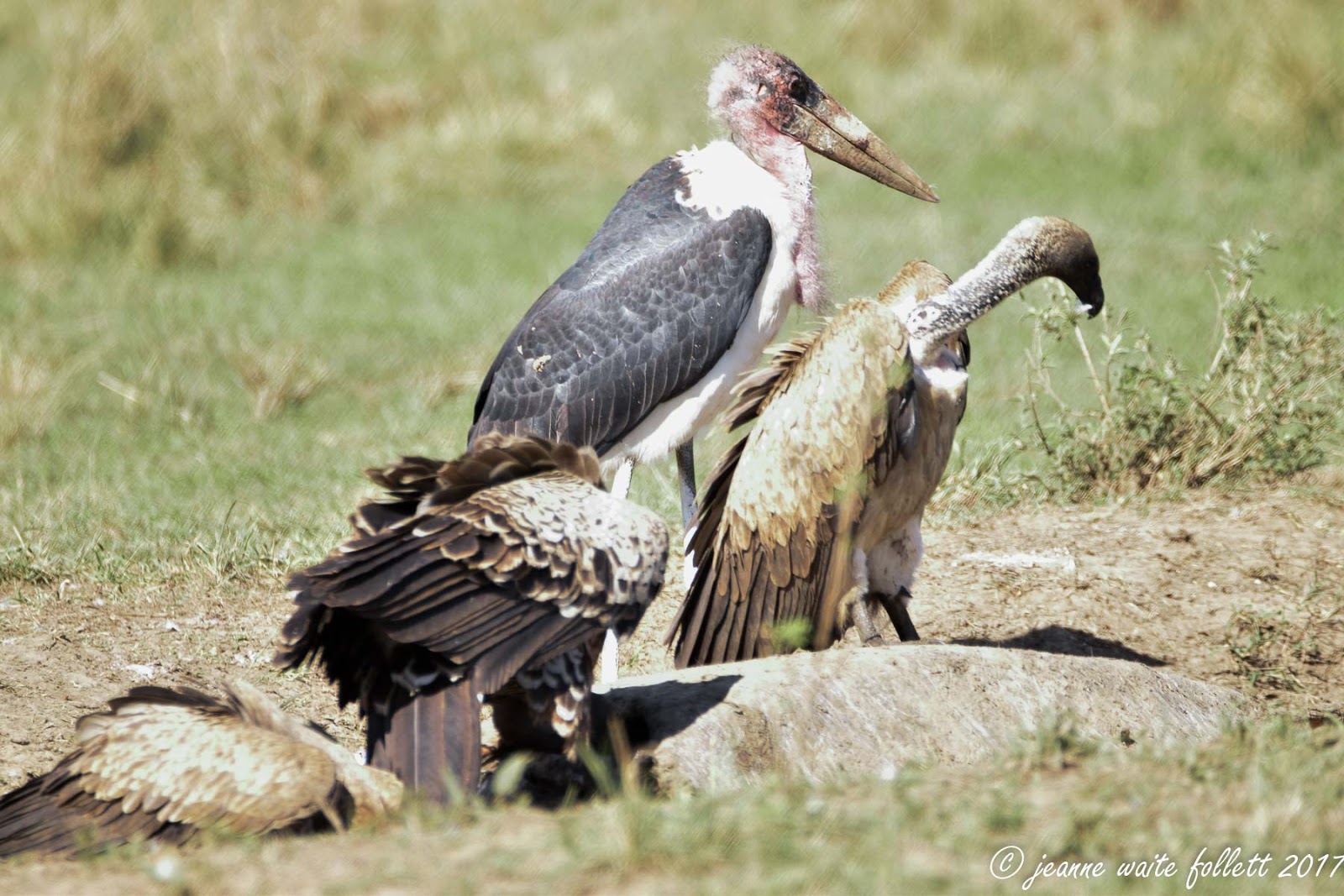 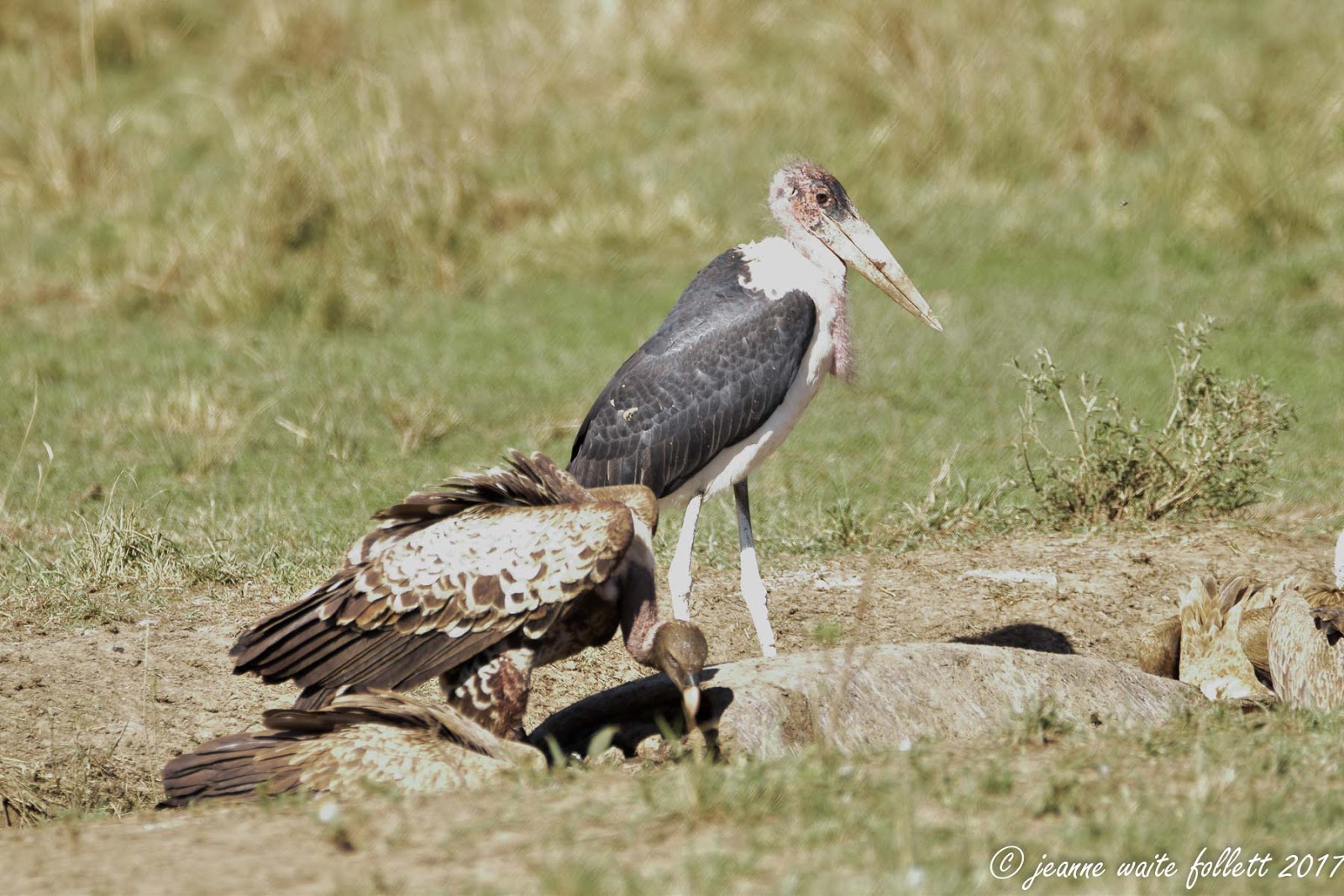 These birds and animals are the custodial crews of the savannah, cleaning up the remains of animals that have died before the insects arrive to finish the job.   It’s a dirty job, but as they say, someone has to do it.  The savannah is sprinkled with the stark white bones and skulls of animals long dead.

At mid-afternoon, the sun is still intense, and the sated hyenas find whatever shade and coolness they can.   One lies in a bit of water; another finds shade under a bush. 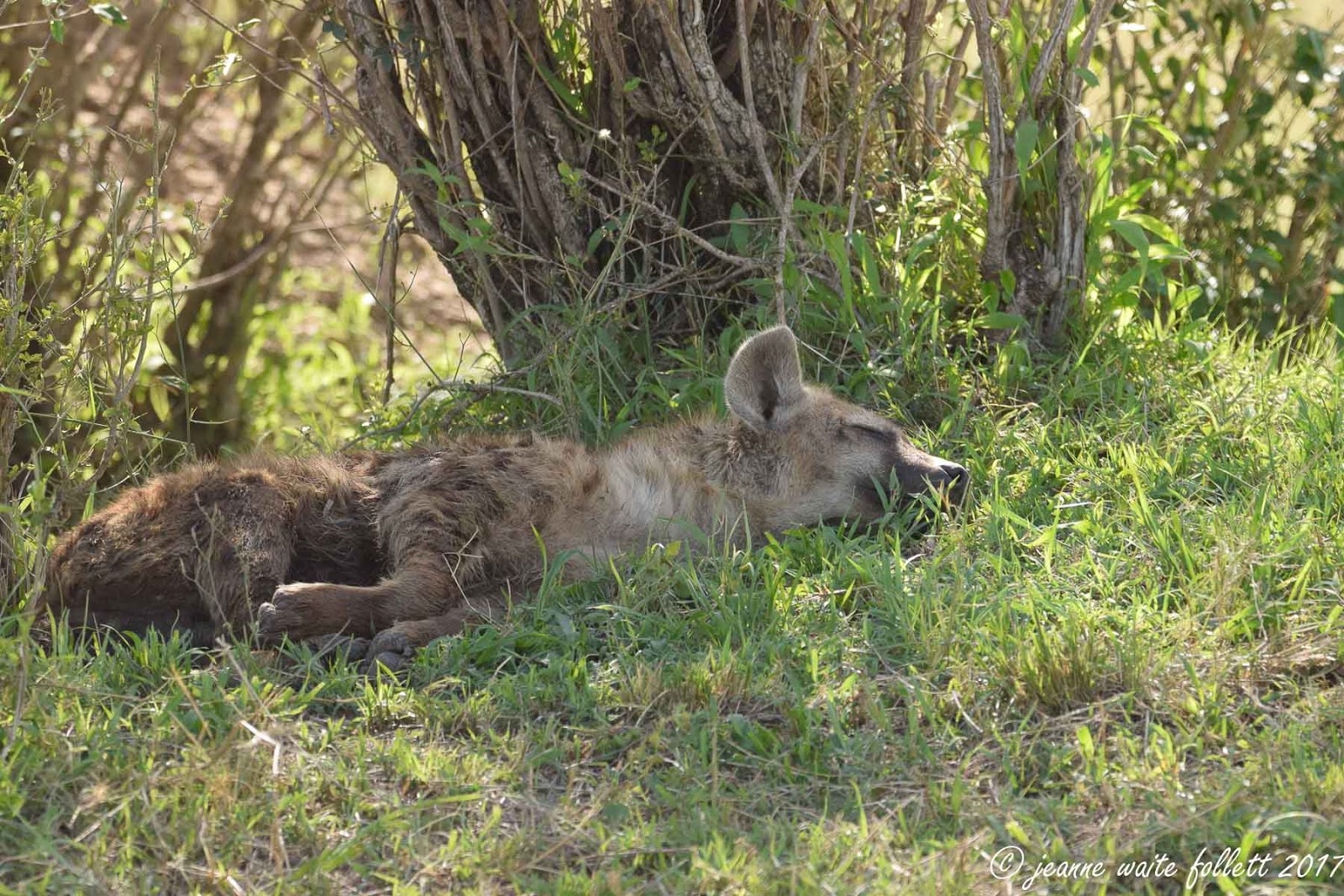 Dennis is in almost constant contact with other guides in the area and word spreads that a serval cat is in such and such an area.   Soon, we are there, snapping shot after shot of a calm male cat also enjoying the shade.   Despite several safari vehicles nearby, the serval is so relaxed in our presence that it almost falls asleep.


And that’s when I realize that the animals of the Masai Mara are habituated to the presence of vehicles.   Prey animals like small antelope and gazelles, and even zebra, don’t pay attention to us as long as the vehicle is moving—unless, like moose in Alaska, they decide they MUST be on the other side of the road—but if the vehicle stops, they move away.

I wonder what their reaction would be to a human on the ground.

The larger animals, the Cape buffalo, eland, giraffes and such, as well as the predators, couldn’t care less.    And the elephants?  They always have the right of way.

We drive to an area of wide open rolling grasslands and other than a large herd of impala in the distance, I’m surprised at the lack of game.  Then I find out why. 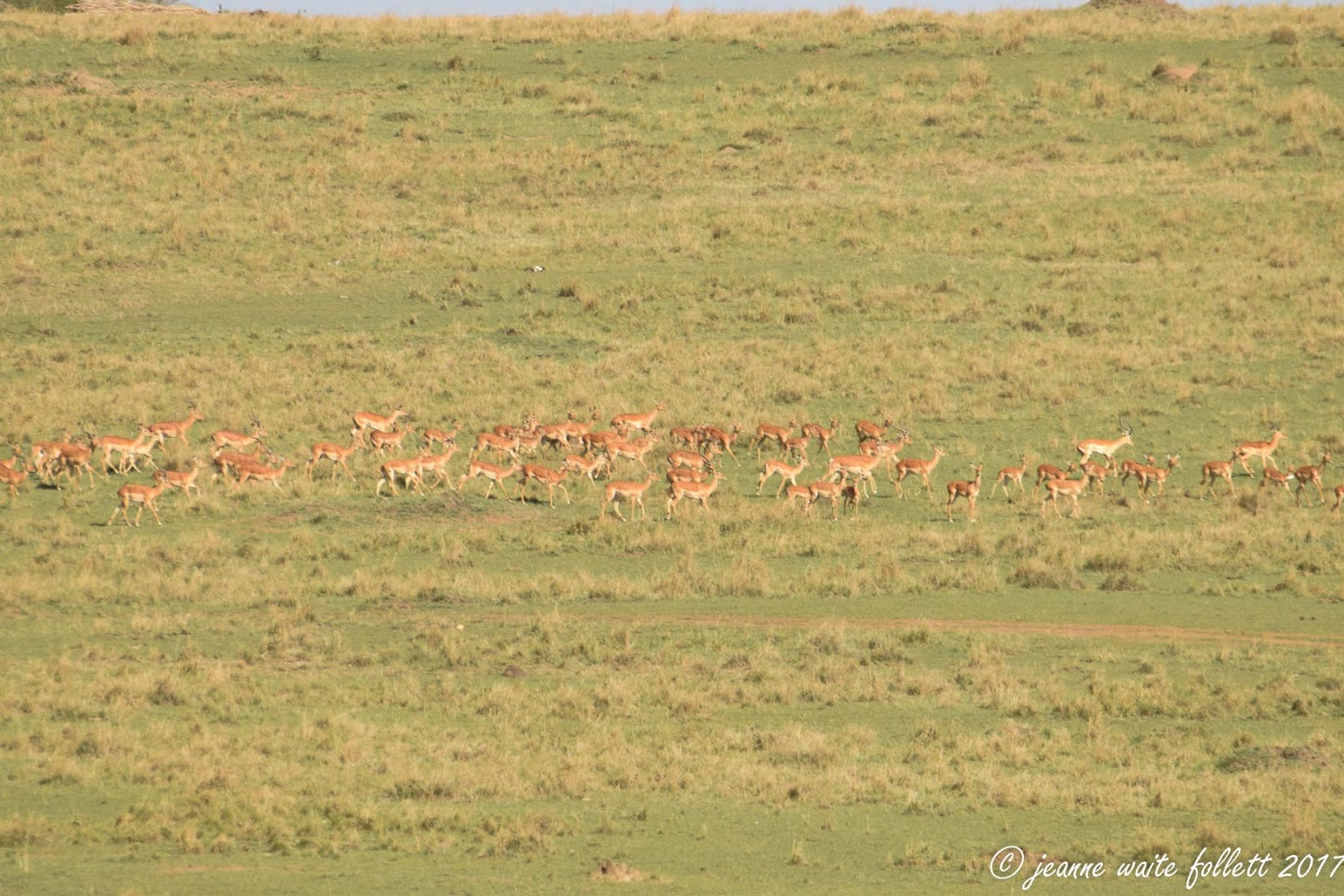 This is cheetah country.   Lots of room to run.   Far out in the tussocks of dry grass a cheetah is stalking the impala.  She’s still a fair distance from them and we watch for long minutes.

Right beside us, her two sub-adult teenagers watch intently, paying us no attention.  They are only months from being on their own.   The mother is too far away for a decent shot, so I’m taking photos of the youngsters when the action starts and I miss it.

Someone says, “There they go!”  The impala, called African fast food because of their speed and the “arches” on their rumps that evoke the McDonald’s logo, get out of African Dodge as fast as they can.   The hunt is ruined by the two young cats giving into their chase instincts and causing the herd to bolt prematurely. 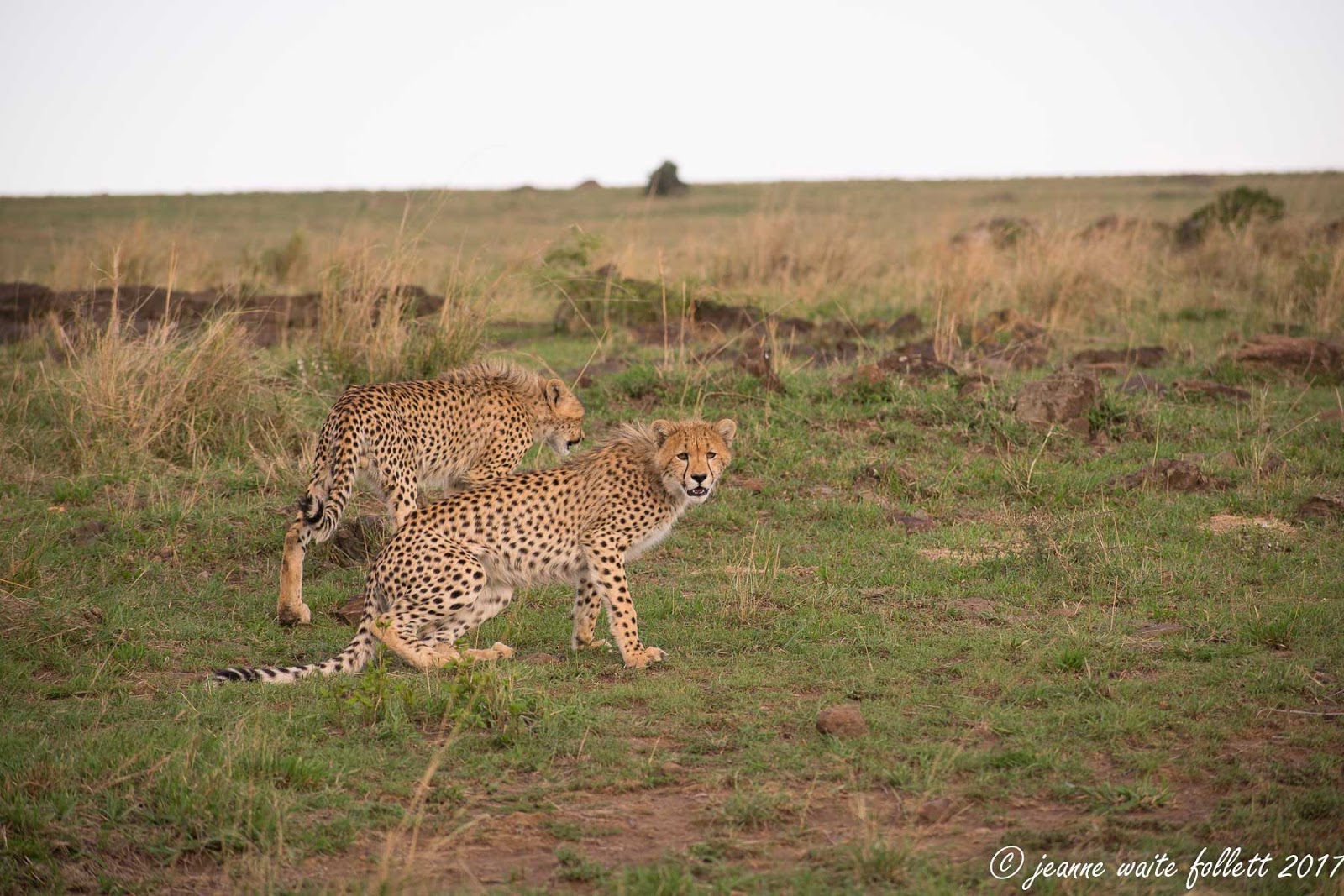 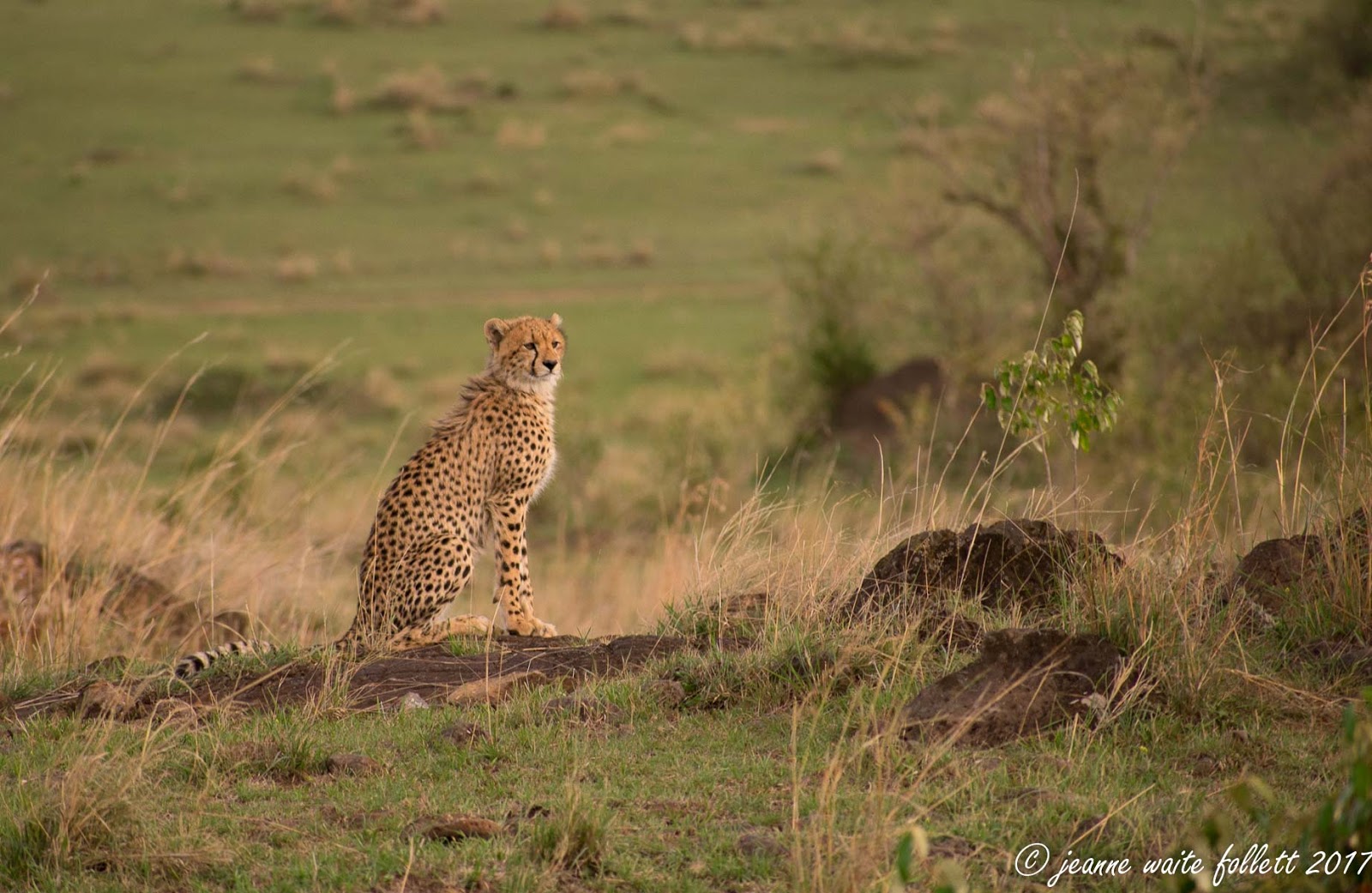 Defeated, the mother cheetah stares after her disappearing dinner and then begins the long walk back to the hill where we wait.  The cubs saunter down to join her.   She must stop often to rest and will not have the energy to hunt again until the next day. 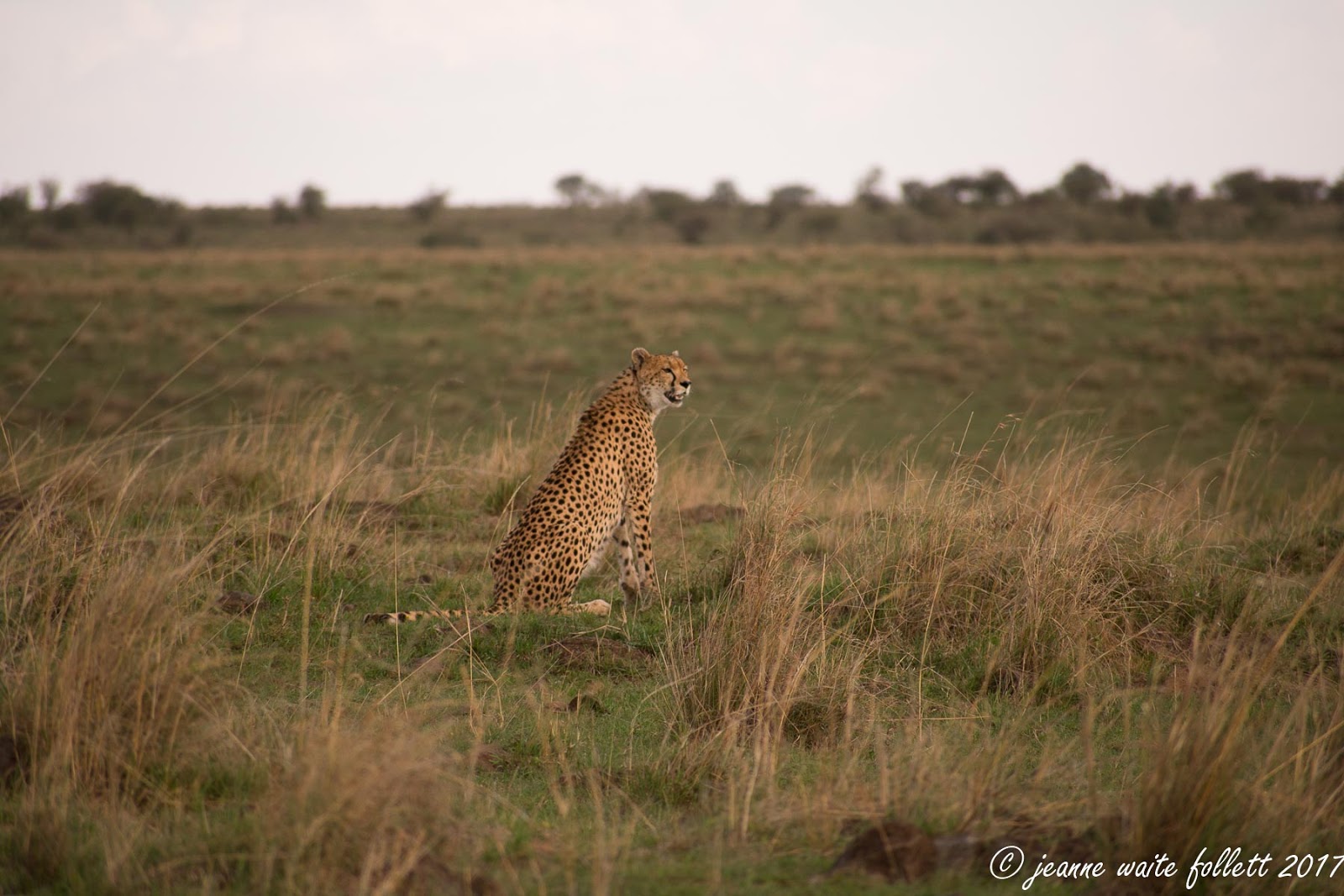 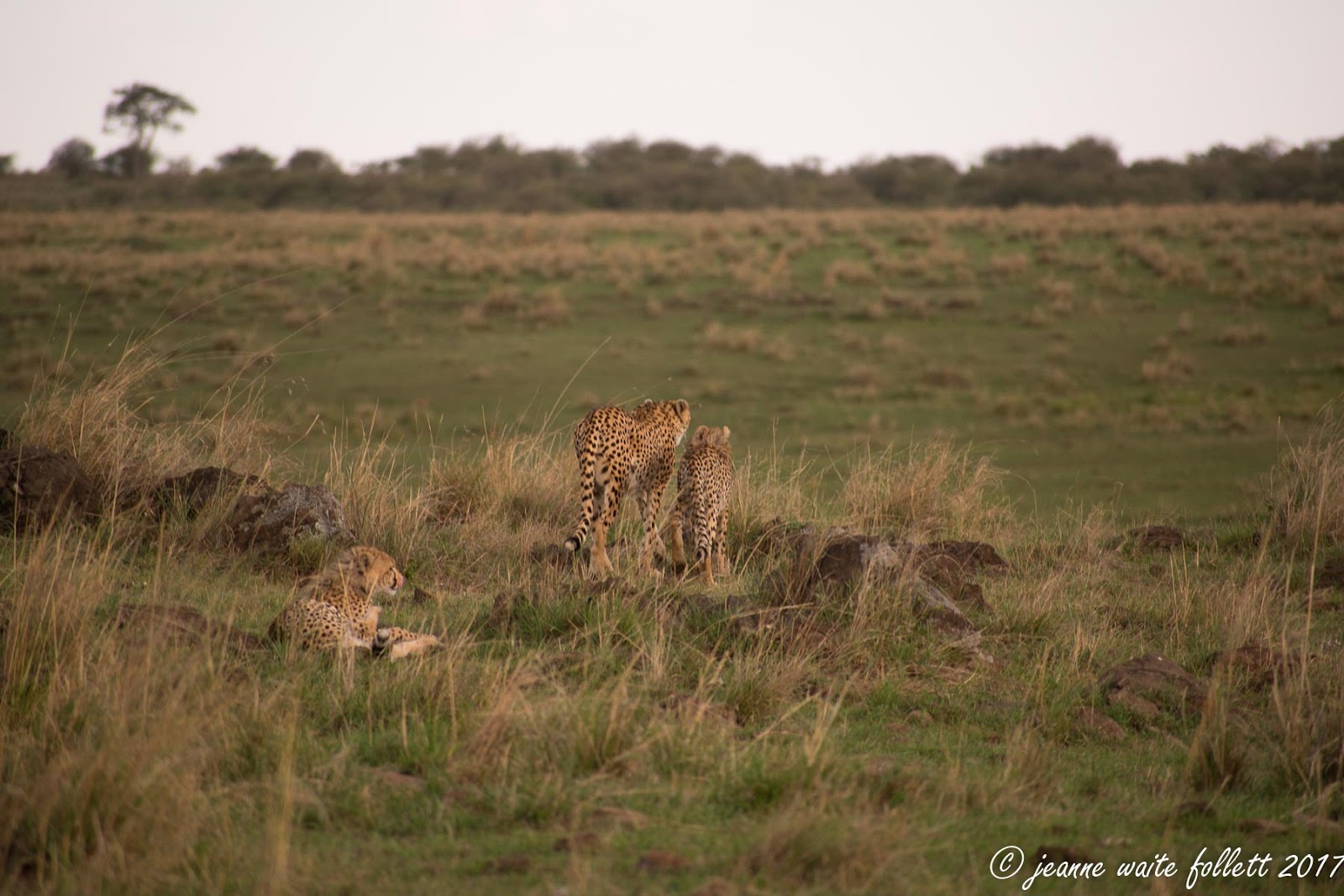 Dennis drives to another area and maneuvers the vehicle along a river bank.  He is careful to park next to a ditch that obviously is a much-used access to the water.

Across the river, wildebeest are making their way down to the river via a similar incline.  A few zebra join them.  We watch as more and more wildebeest gather along the river, apparently choosing to cross the river in a spot directly in front of our vehicle.   I can’t see it because of the vehicle and the steepness of the bank. 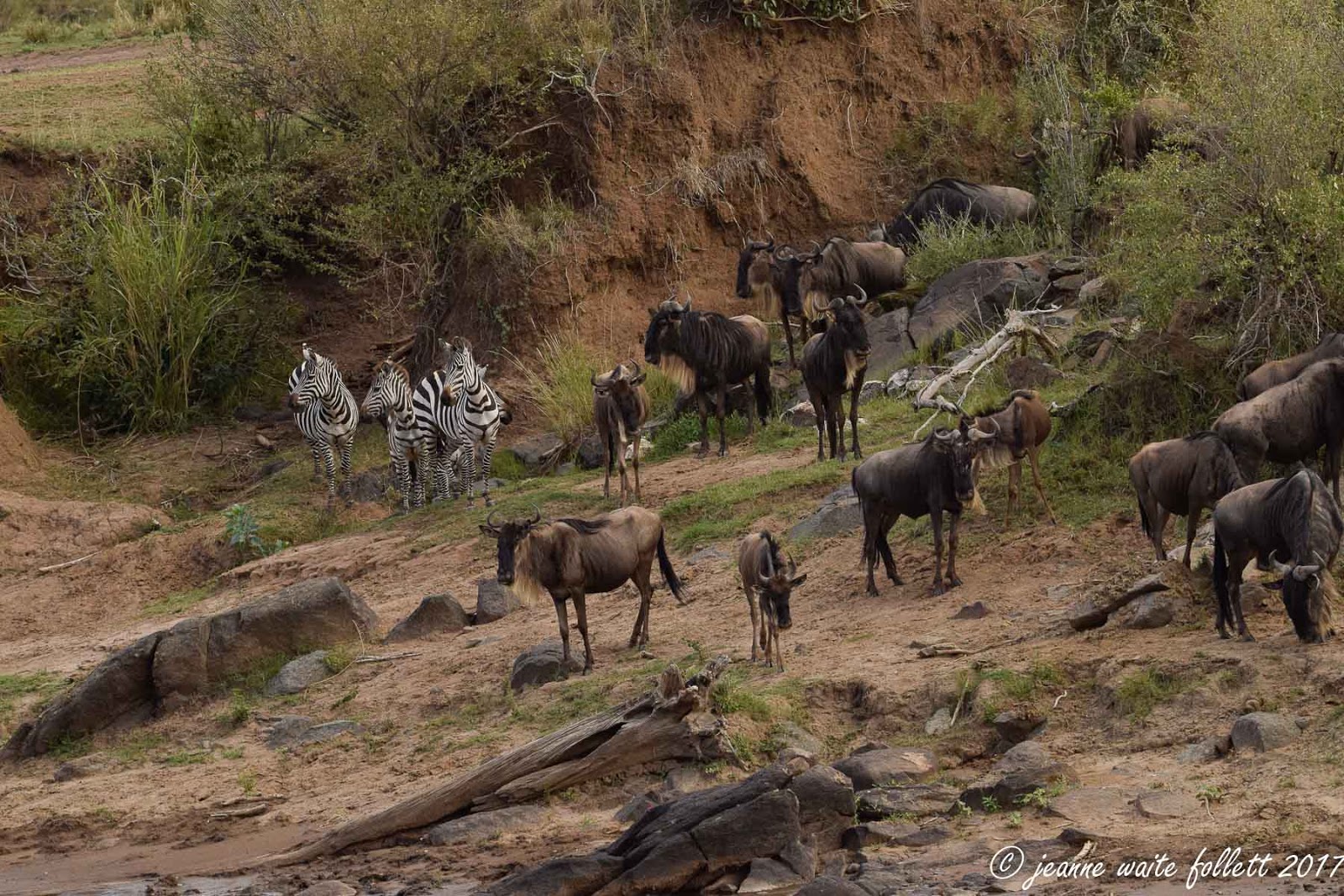 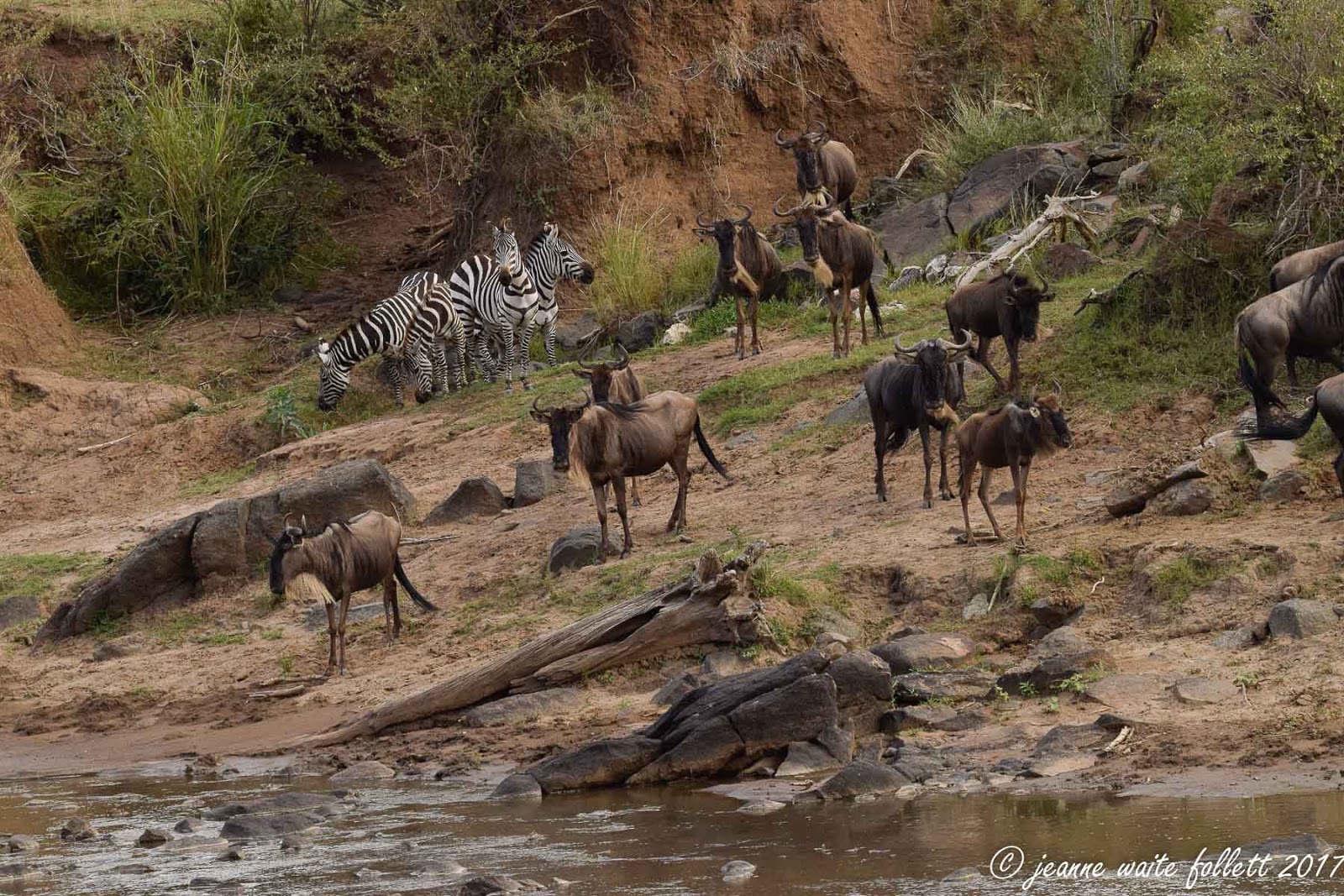 I notice the zebra are in a small group and appear wary.   Looking down the side of the vehicle, I see the first of the wildebeest in the water and watch as they come up right next to our vehicle.

And then all hell breaks loose! 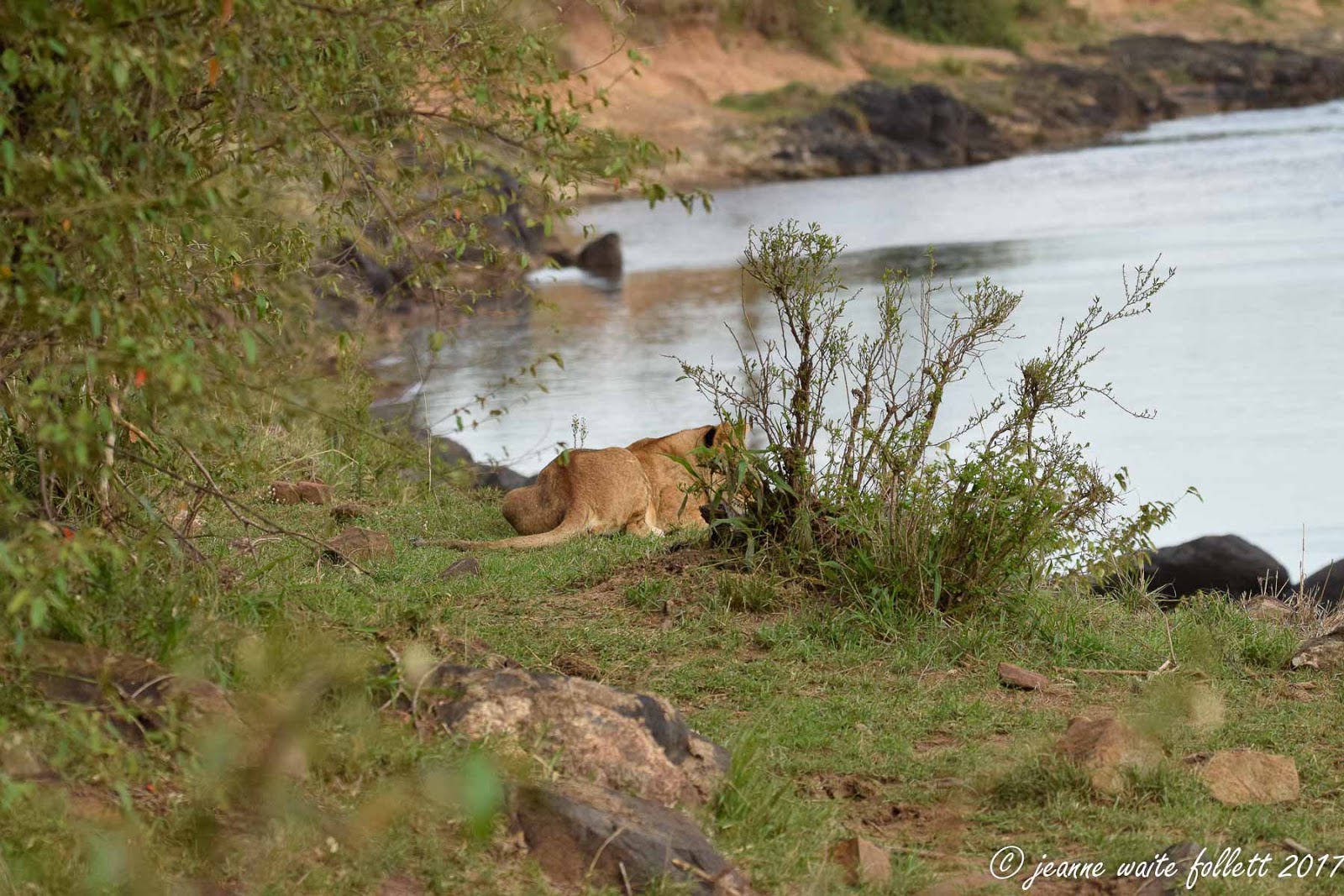