The Kenya Journals, Ch. 6: Gobsmacked on the Masai Mara 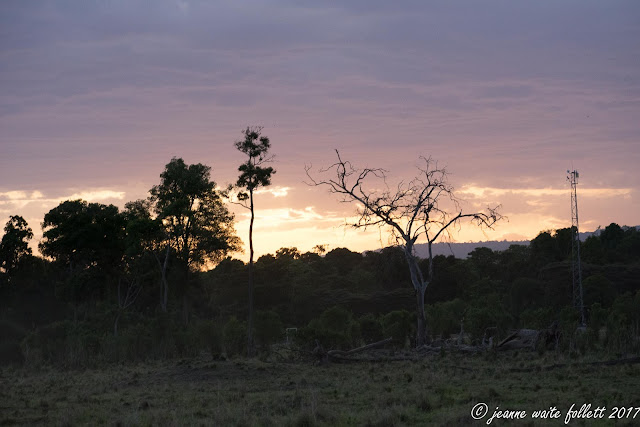 Dennis maneuvers our safari vehicle around another one and parks next to a well-worn trench.   I’m new to the ways of the Mara, but even I can see that it is an access trail down the steep bank to the river, worn deep into the soil by generations of hooves.

Across the river, wildebeest and zebra are descending a similar trail and gathering along the river shore.  The wildebeest are moving to my right and my view of them is blocked by our vehicle so I can’t tell if they intend to cross or just to drink. 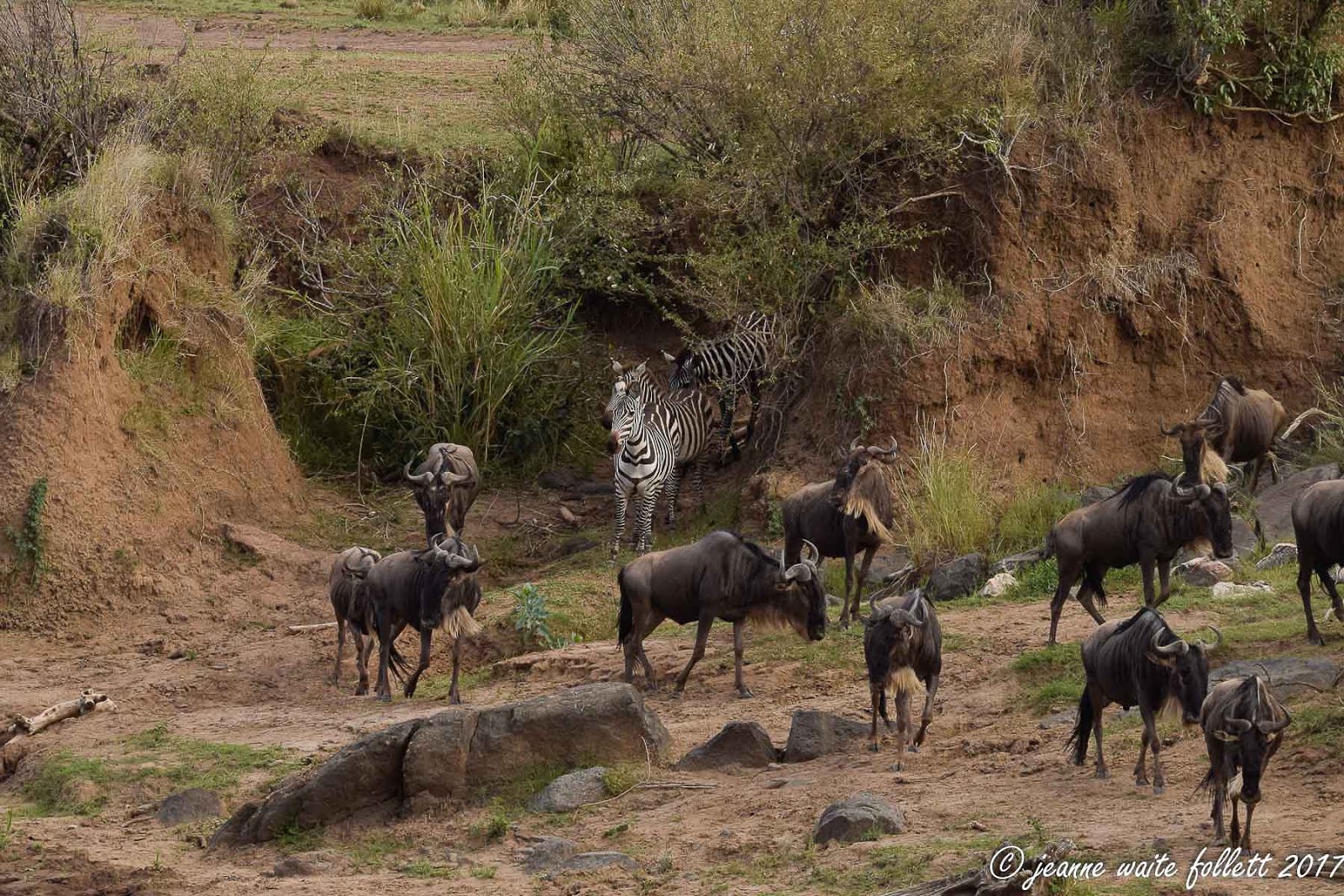 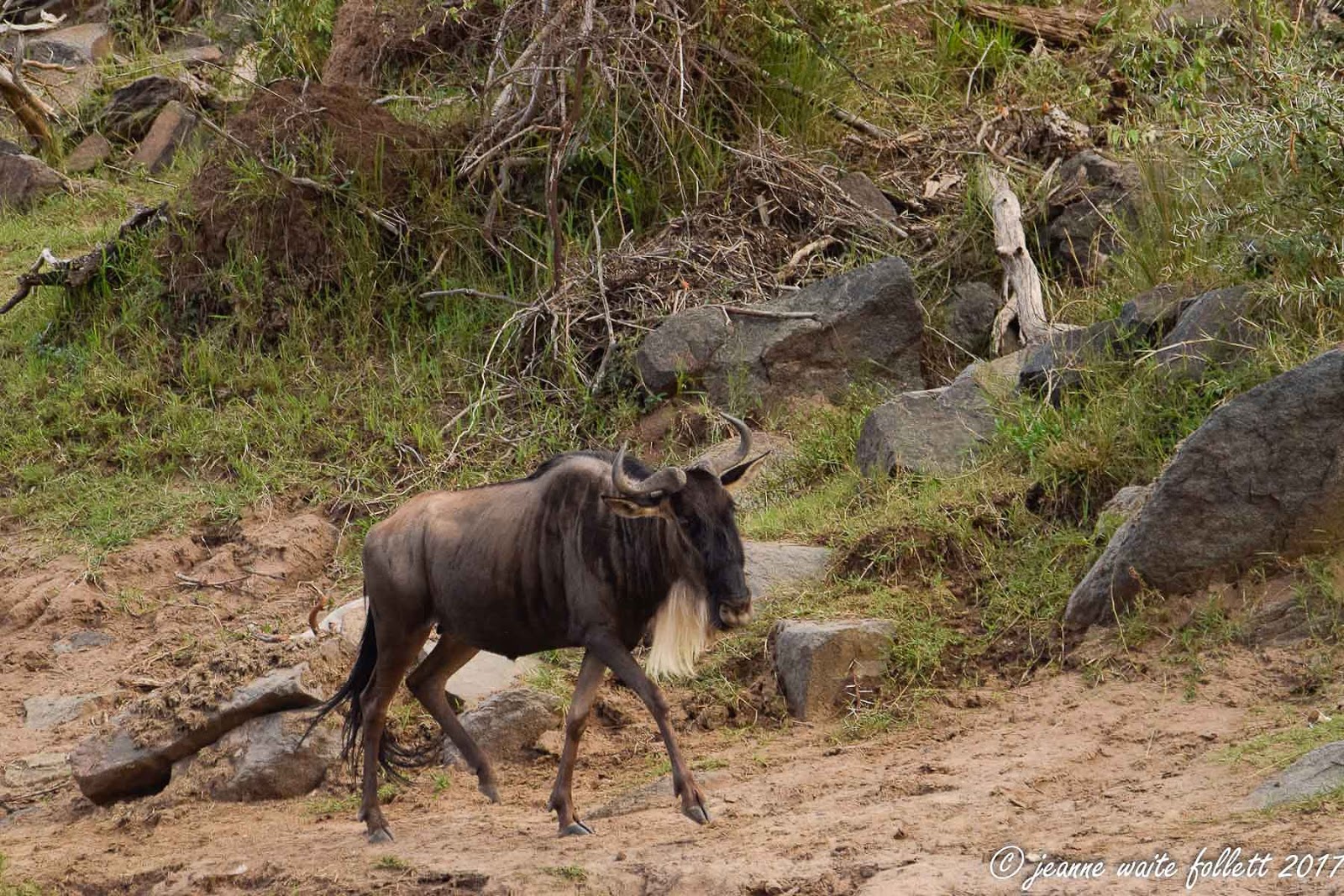 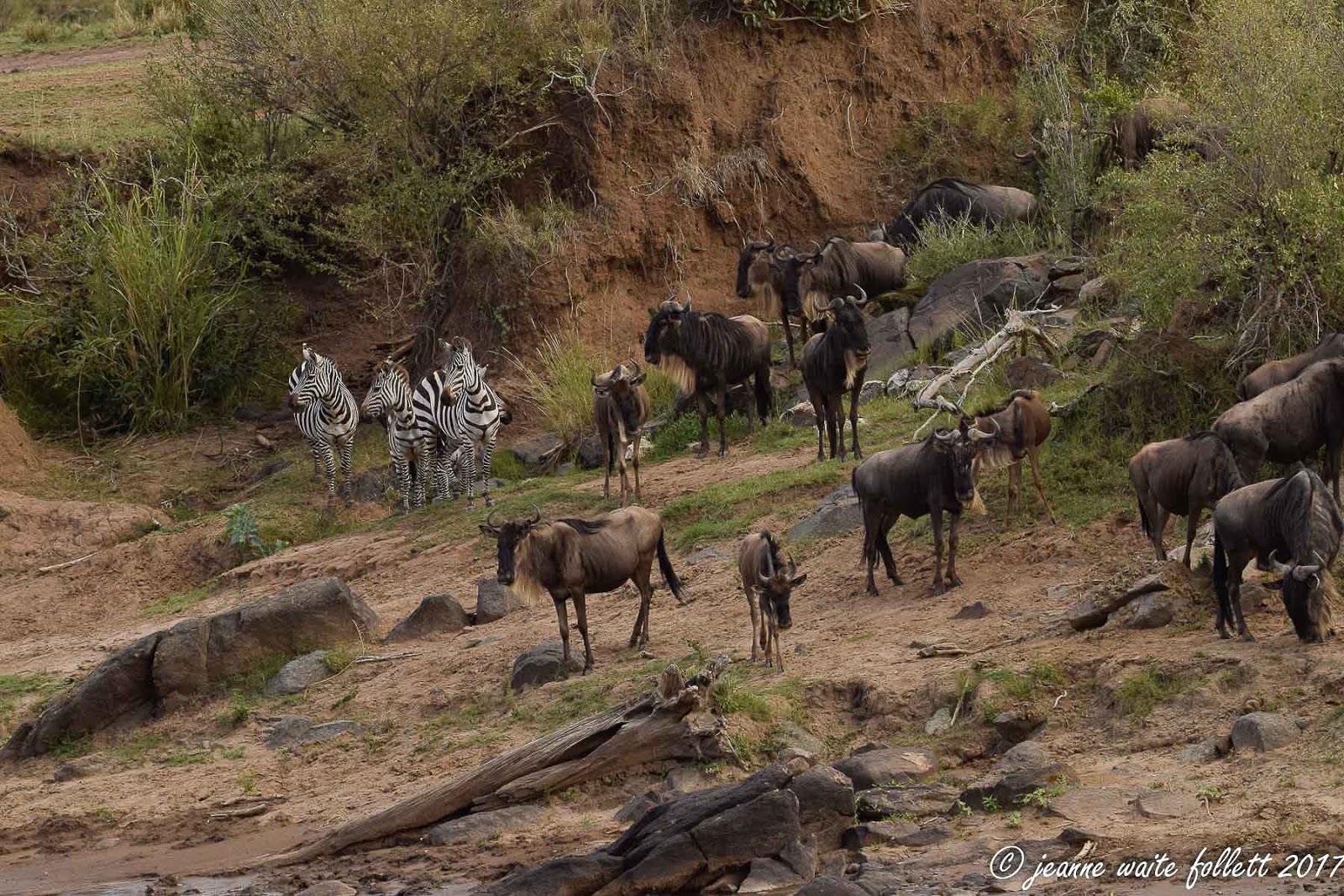 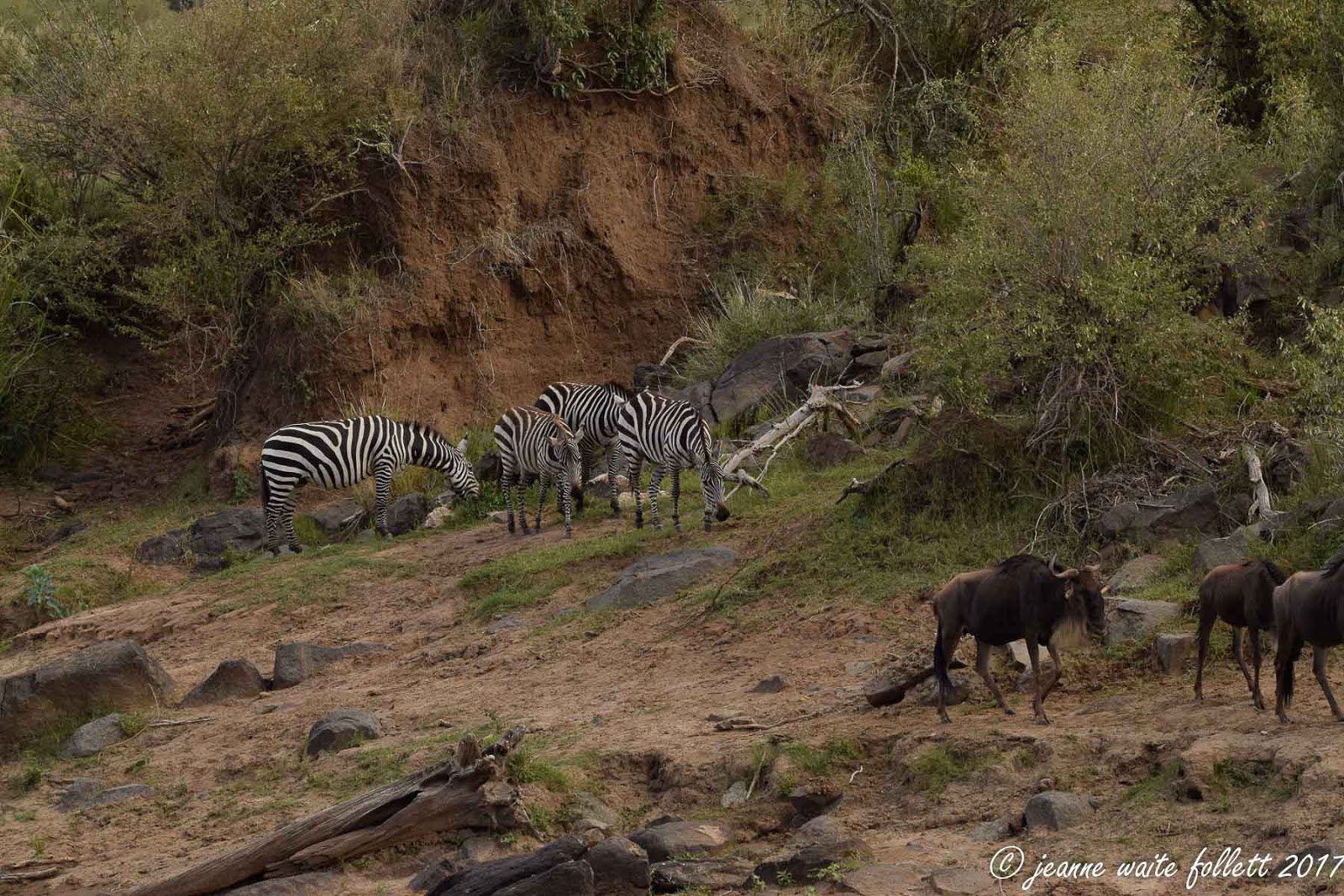 I notice the zebra on the river shore are bunched up and holding back, acting wary.  They are looking across the river—looking directly at a lioness crouched beside a bush.   She was there when we arrived and hasn't moved. 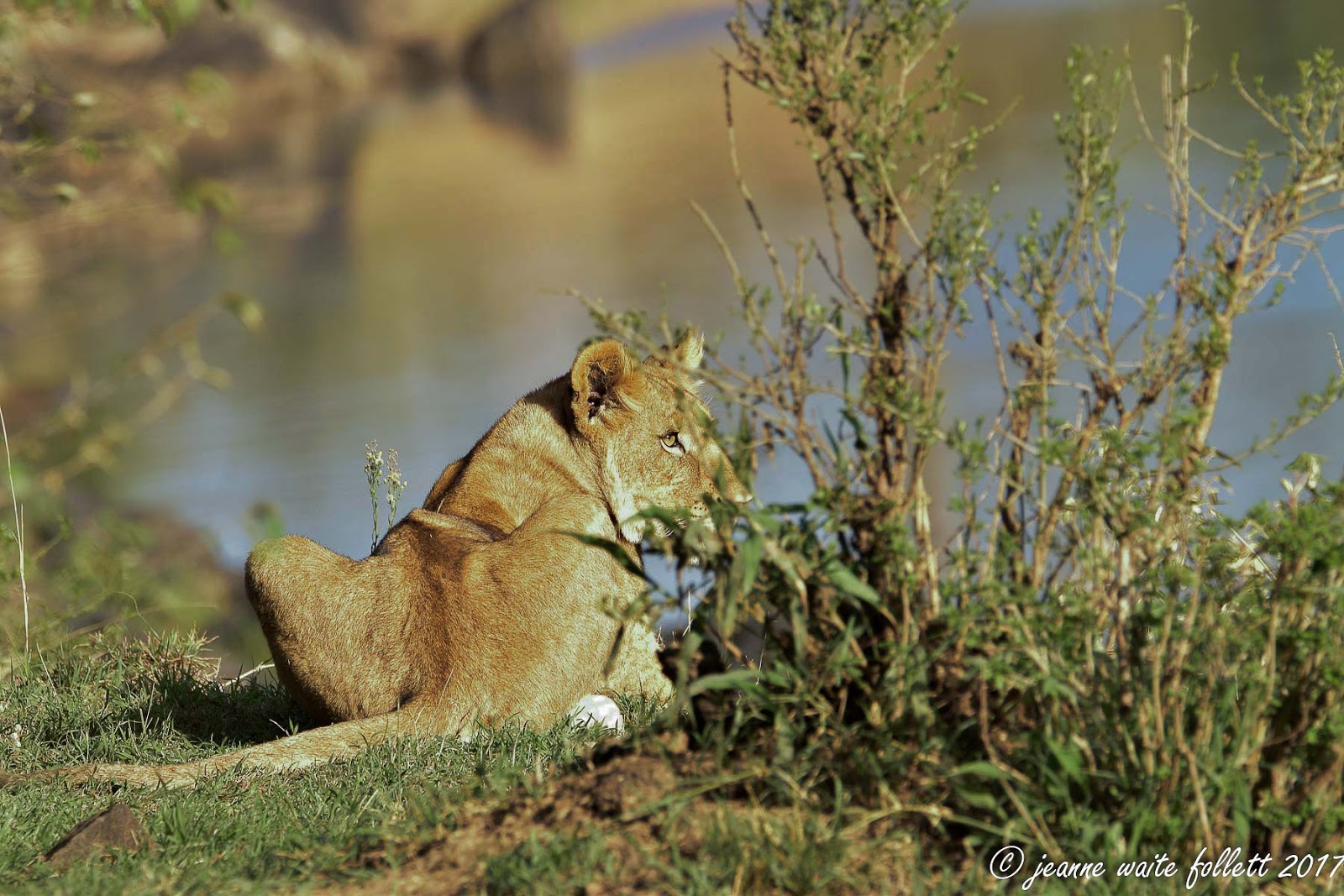 I lean out the side of the vehicle and see several wildebeest in the water.   It’s an awkward position for me and my camera focuses on the vegetation rather than the animals.   Suddenly, a couple wildebeest reach the top of the trench and stop, apparently surprised that we are parked right next to them, almost close enough to touch.

And then all hell breaks loose!

There is an explosion of wildebeest and lions!   Predator and prey go in several directions, so fast it’s impossible to keep up with them, especially if you’re watching the action through the viewfinder on your camera.

I had set up take a shot of the wildebeest right next to us but accidentally—and fortuitously—catch a lioness coming right toward me in full charge.  My camera is set to take multiple shots as long as the shutter button is depressed and it is not until later that I realize what I have captured. 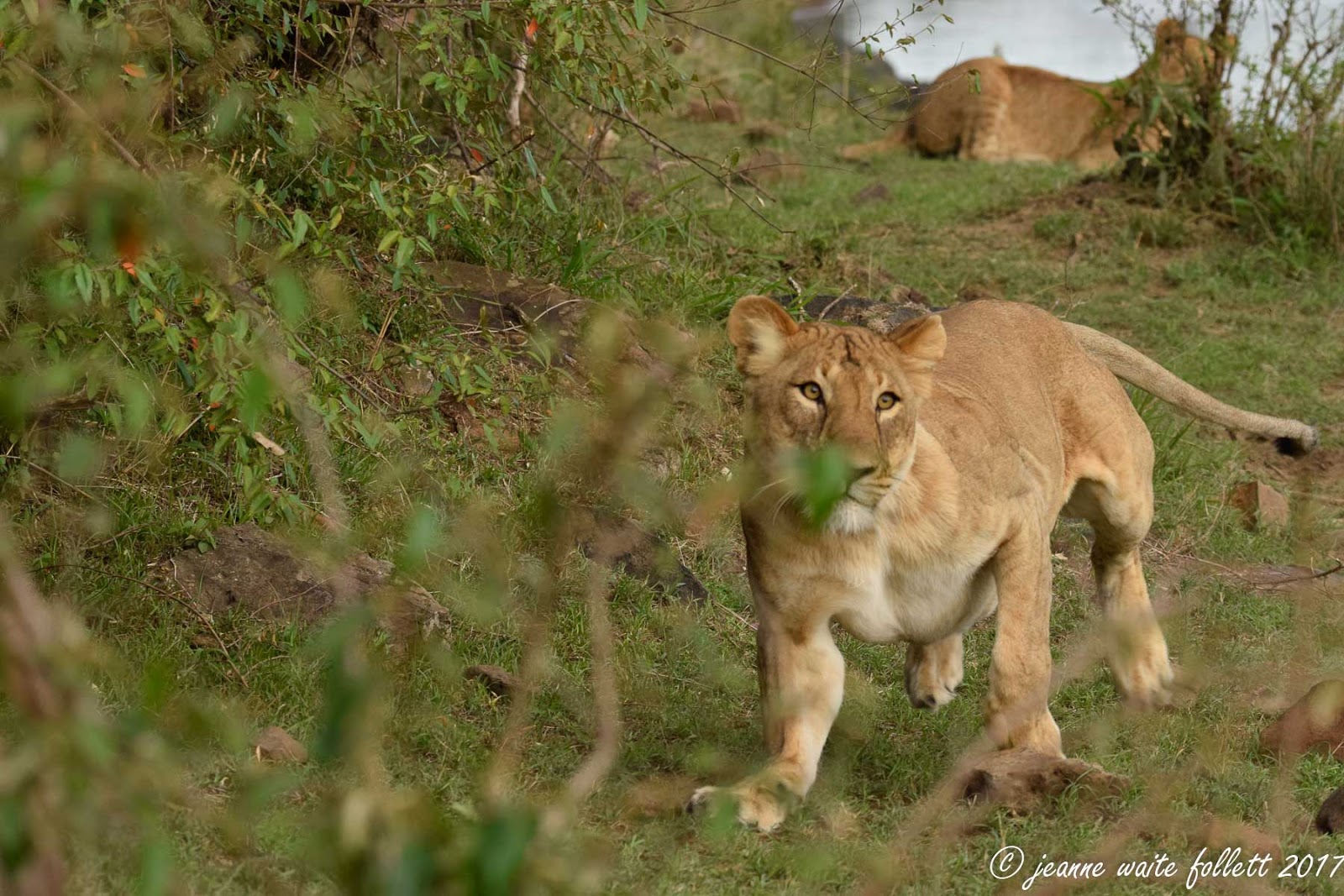 As quickly as they appeared, predator and prey disappear.   I have a vague sense of a wildebeest disappearing away from us into the brush that covers the hill, but when I said there was an explosion of action, I meant it.

Dennis starts the Land Rover and drives around the base of the hill to the far side.  It takes only a couple minutes and when we arrive we see that the lions have been successful.  The wildebeest is already dead, thank goodness, and one lioness is beginning to work on the soft tissue of its underbelly. 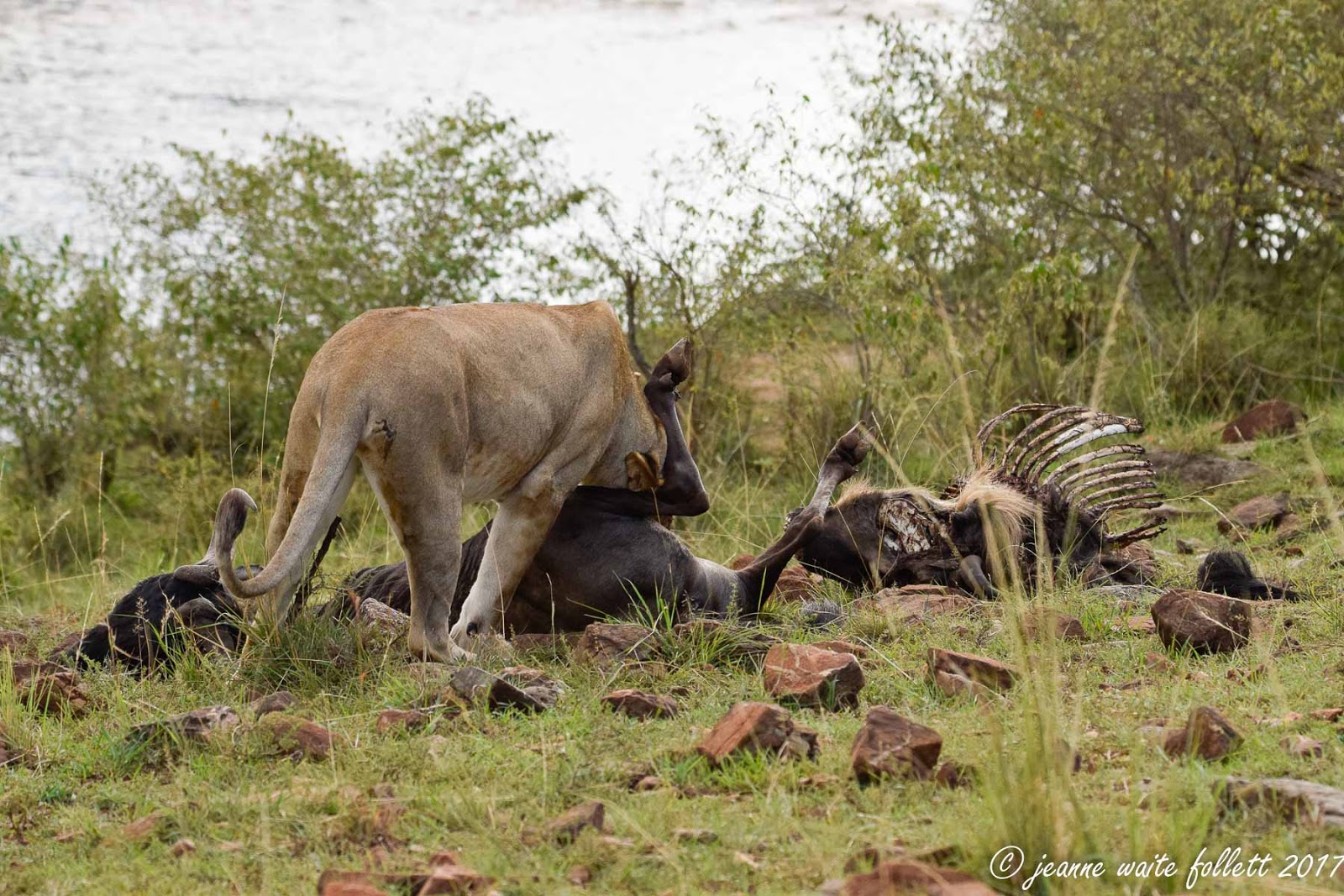 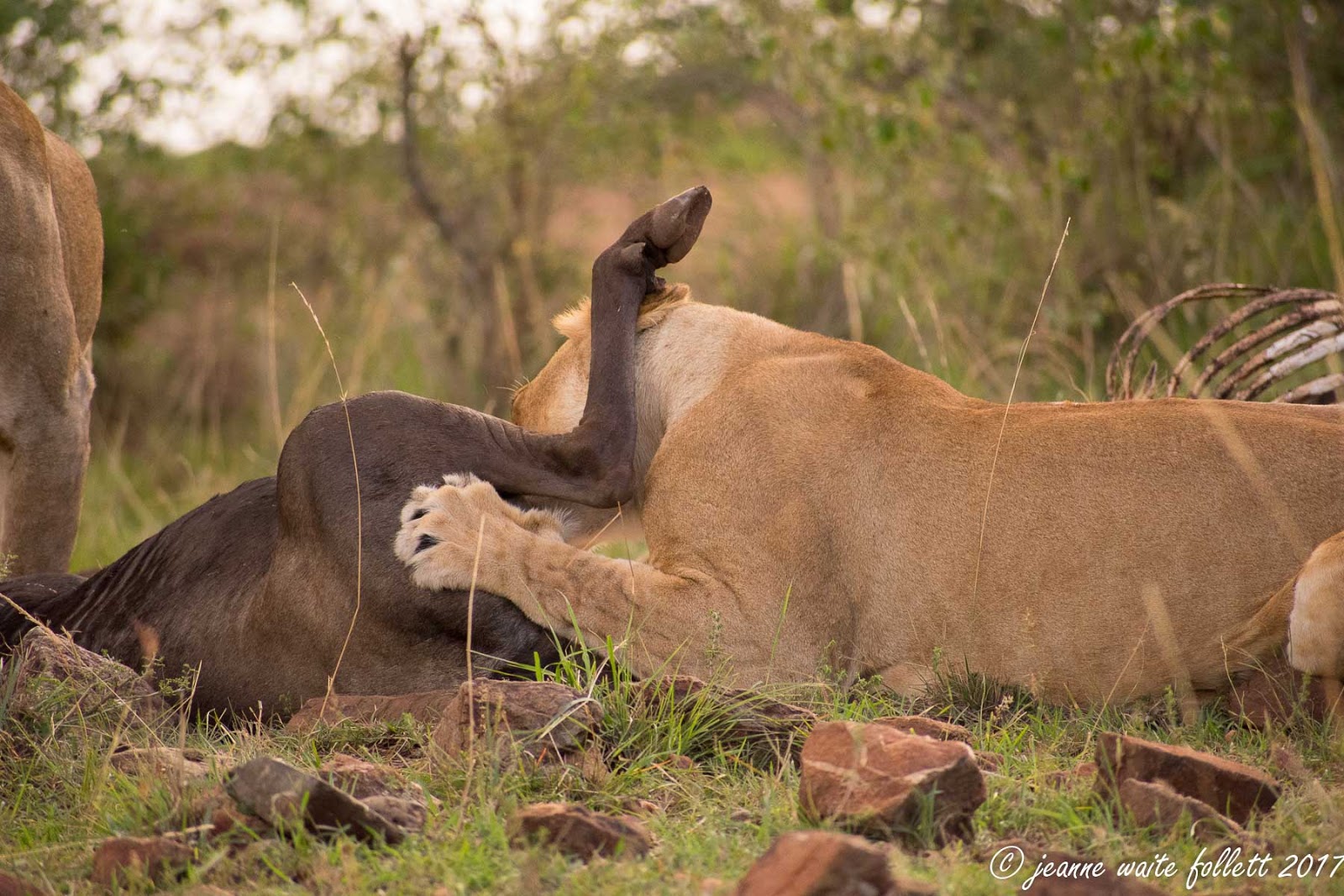 Right next to the wildebeest is the bare rib cage and head of another wildebeest that had fallen to the lions.  It is an eerie scene.

A lioness appears on the hill.   Apparently, her cubs were hidden up there in the brush during the stalk and chase, and she is now bringing them down. 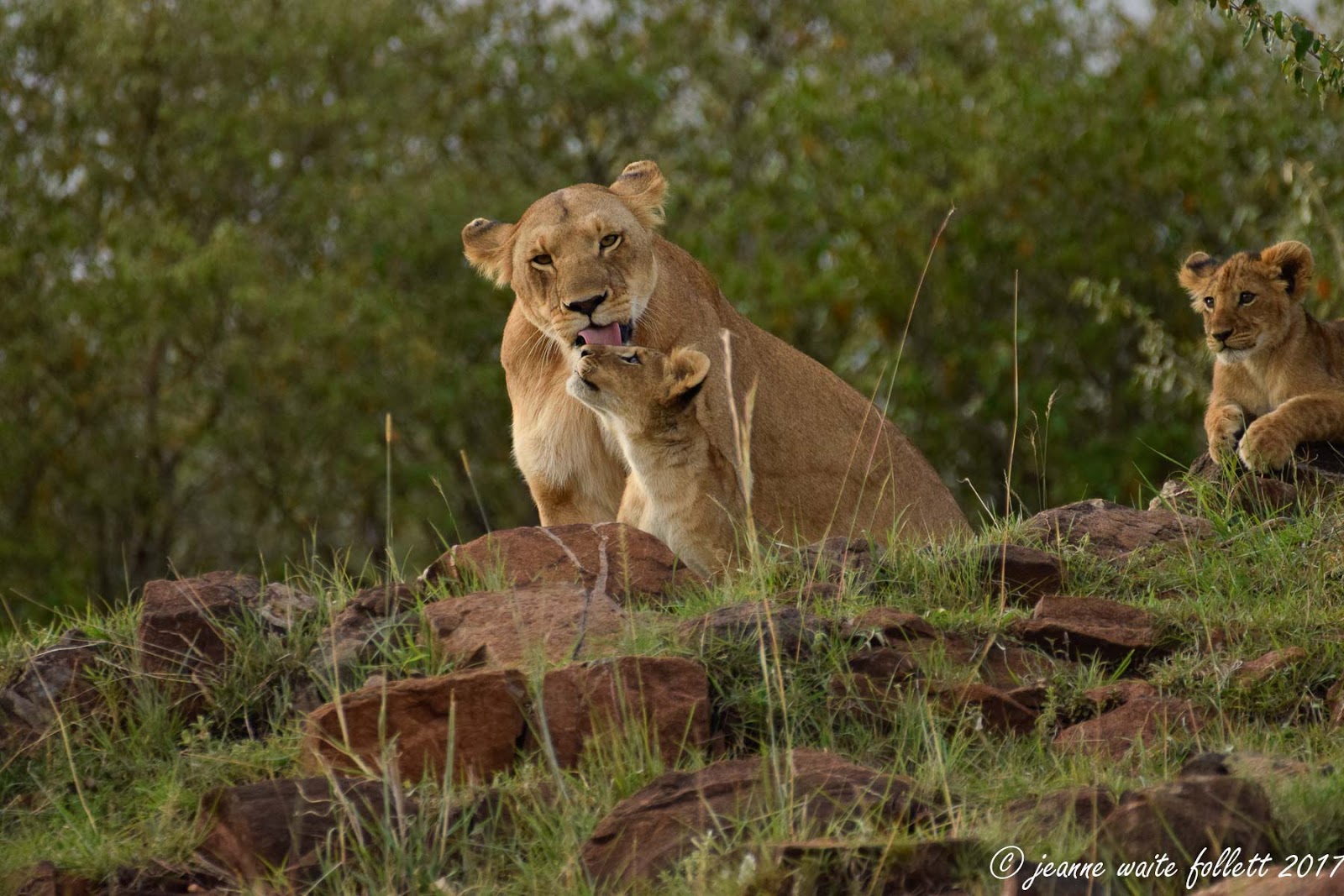 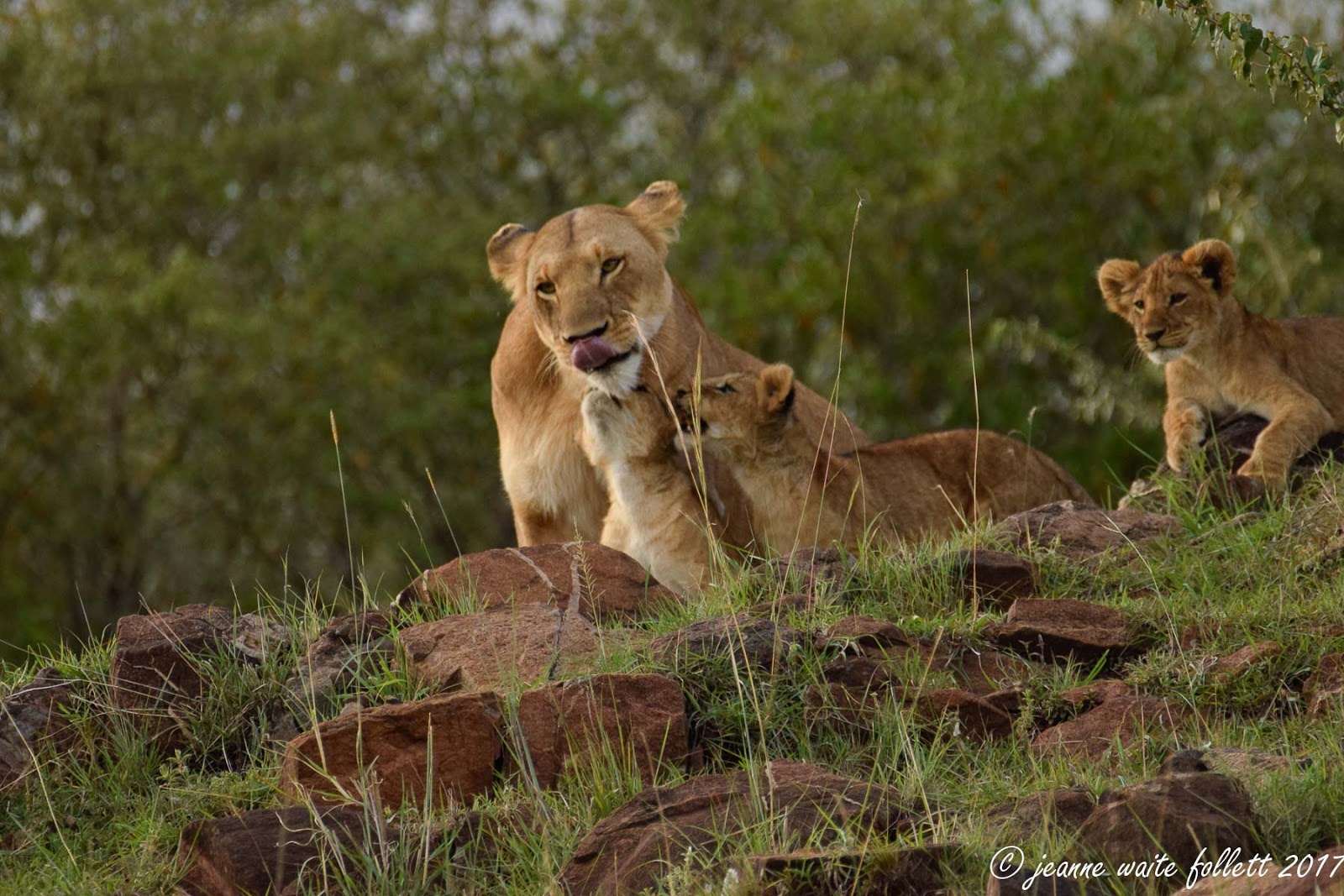 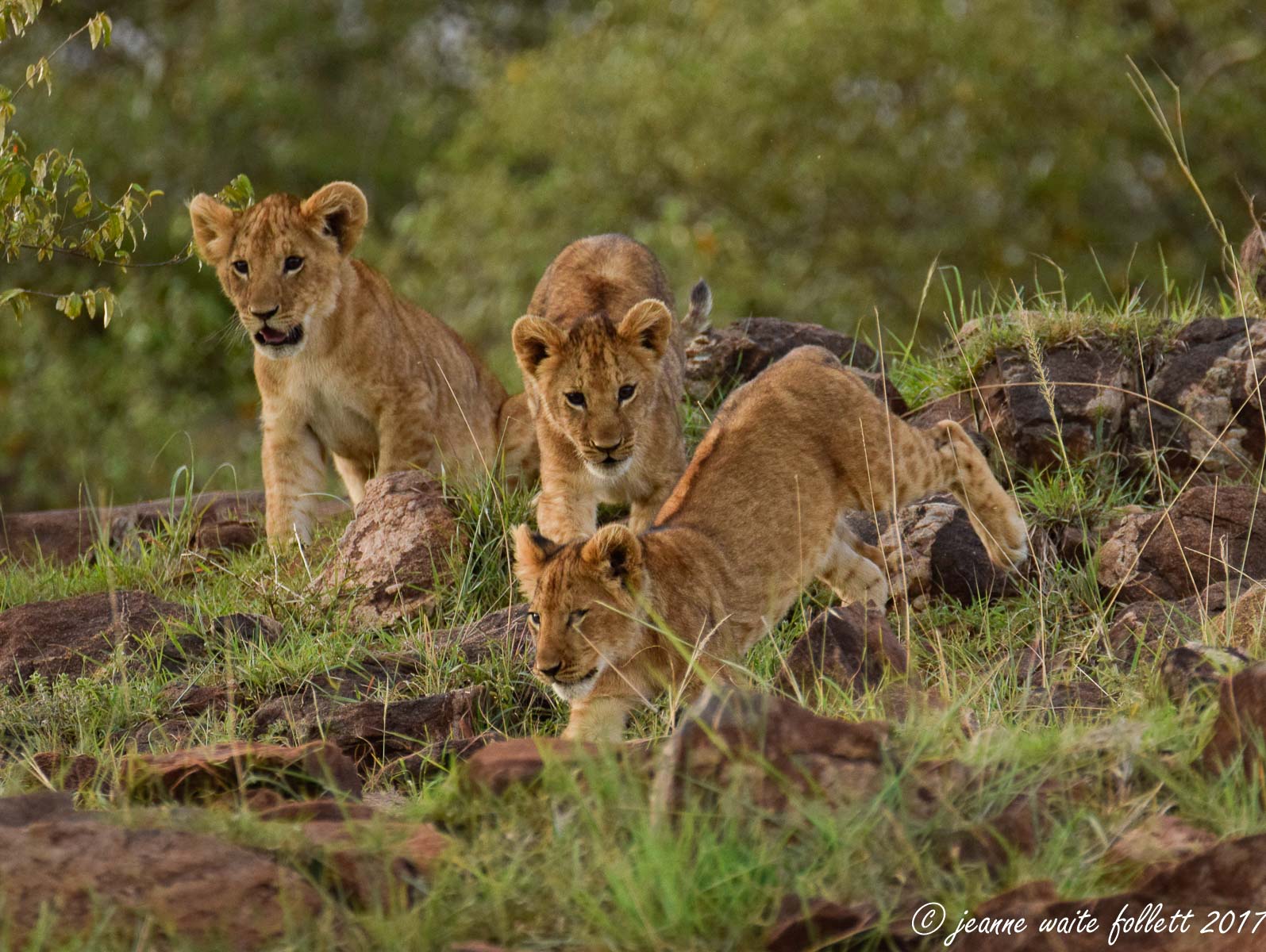 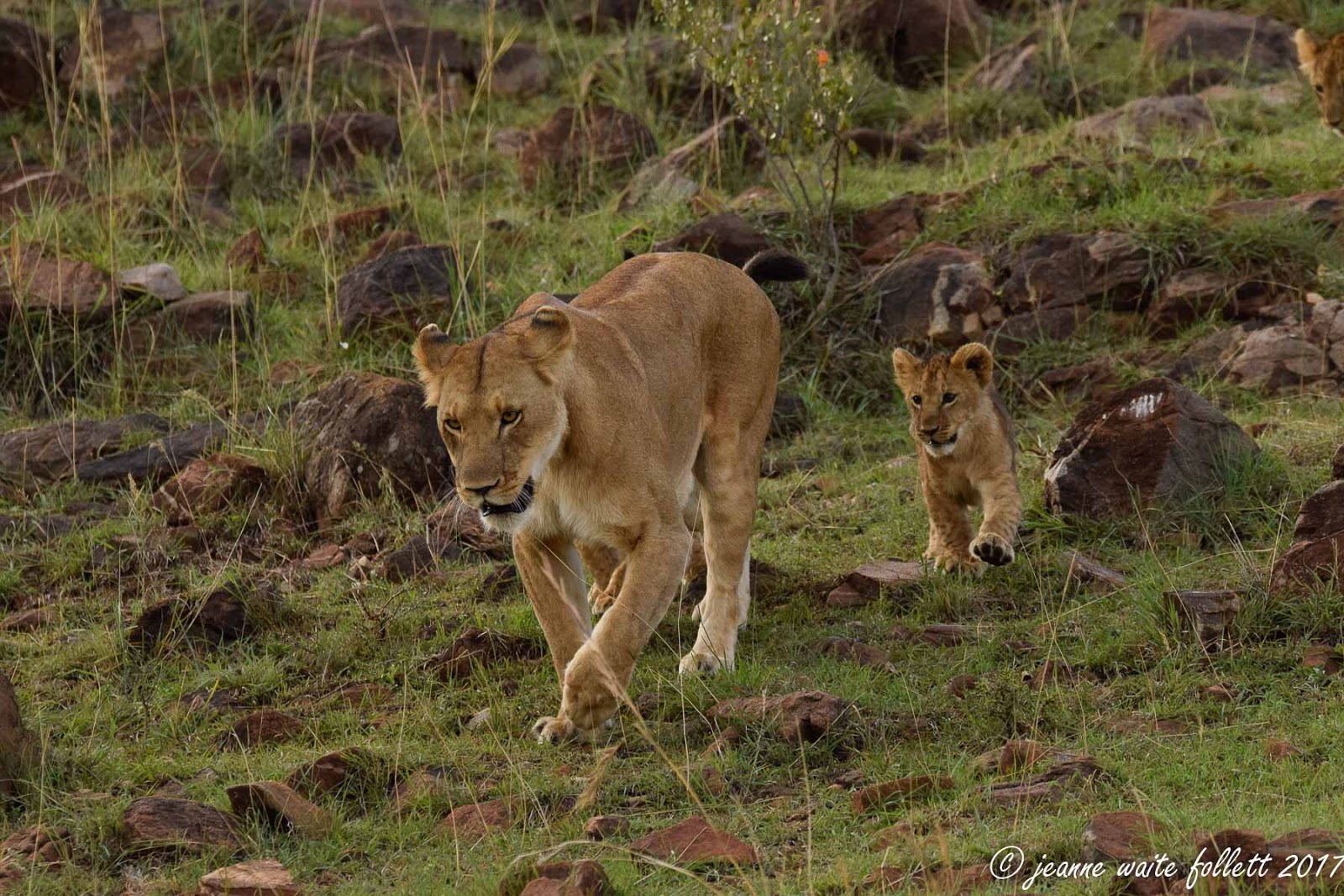 Only one lioness feeds on the wildebeest.   The others hold back for a long time, perhaps exhausted from the chase, perhaps obeying the hierarchy of the pride. 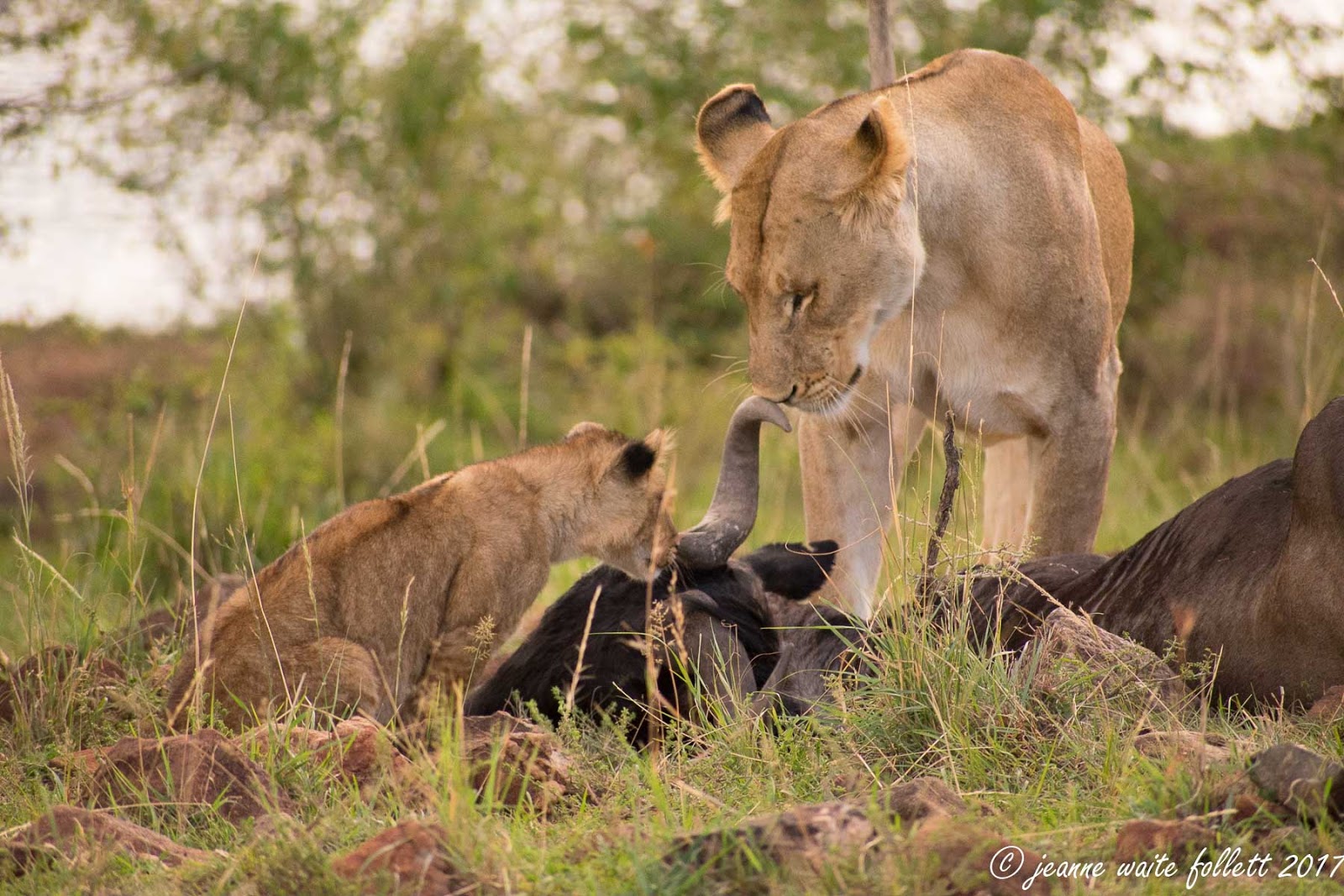 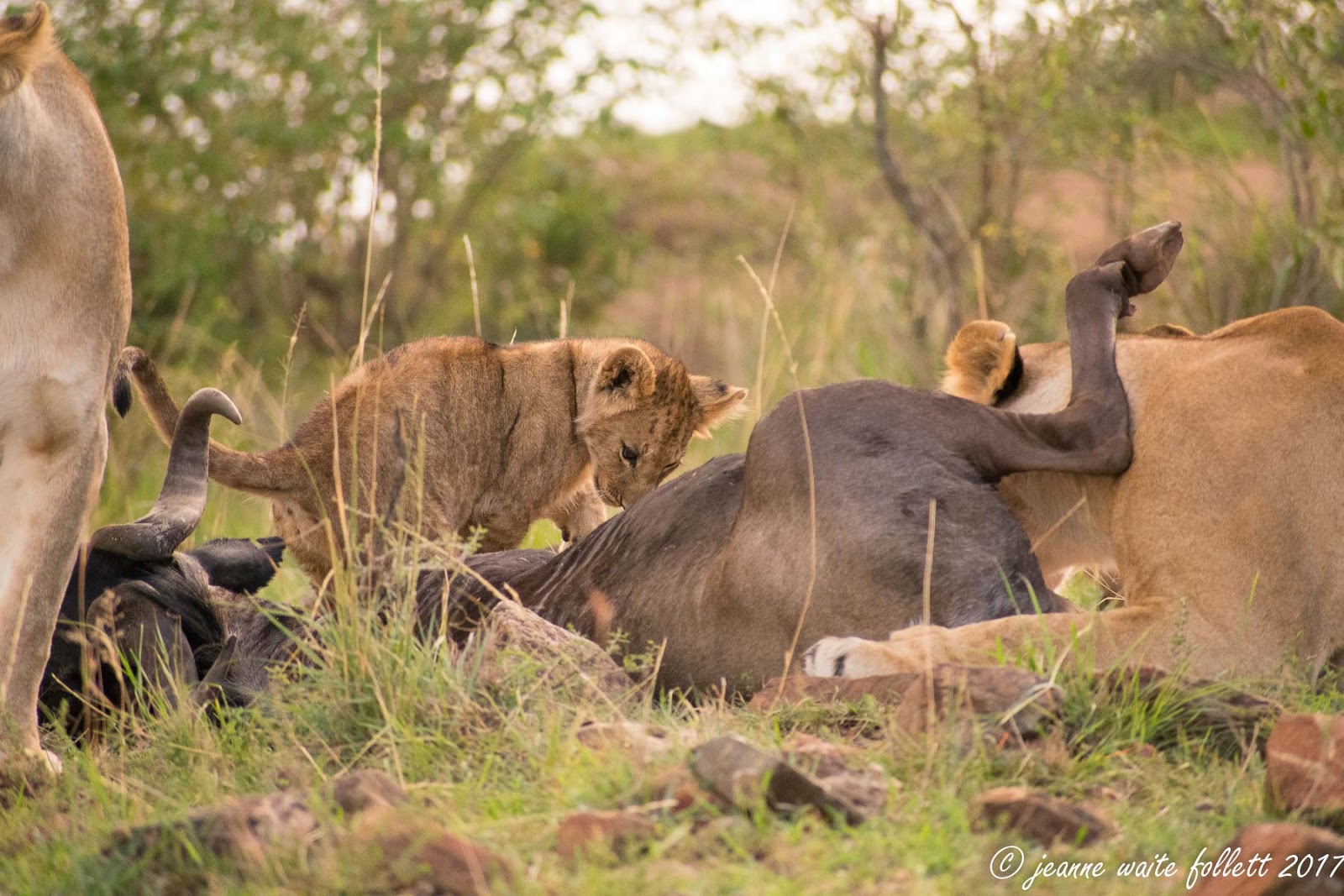 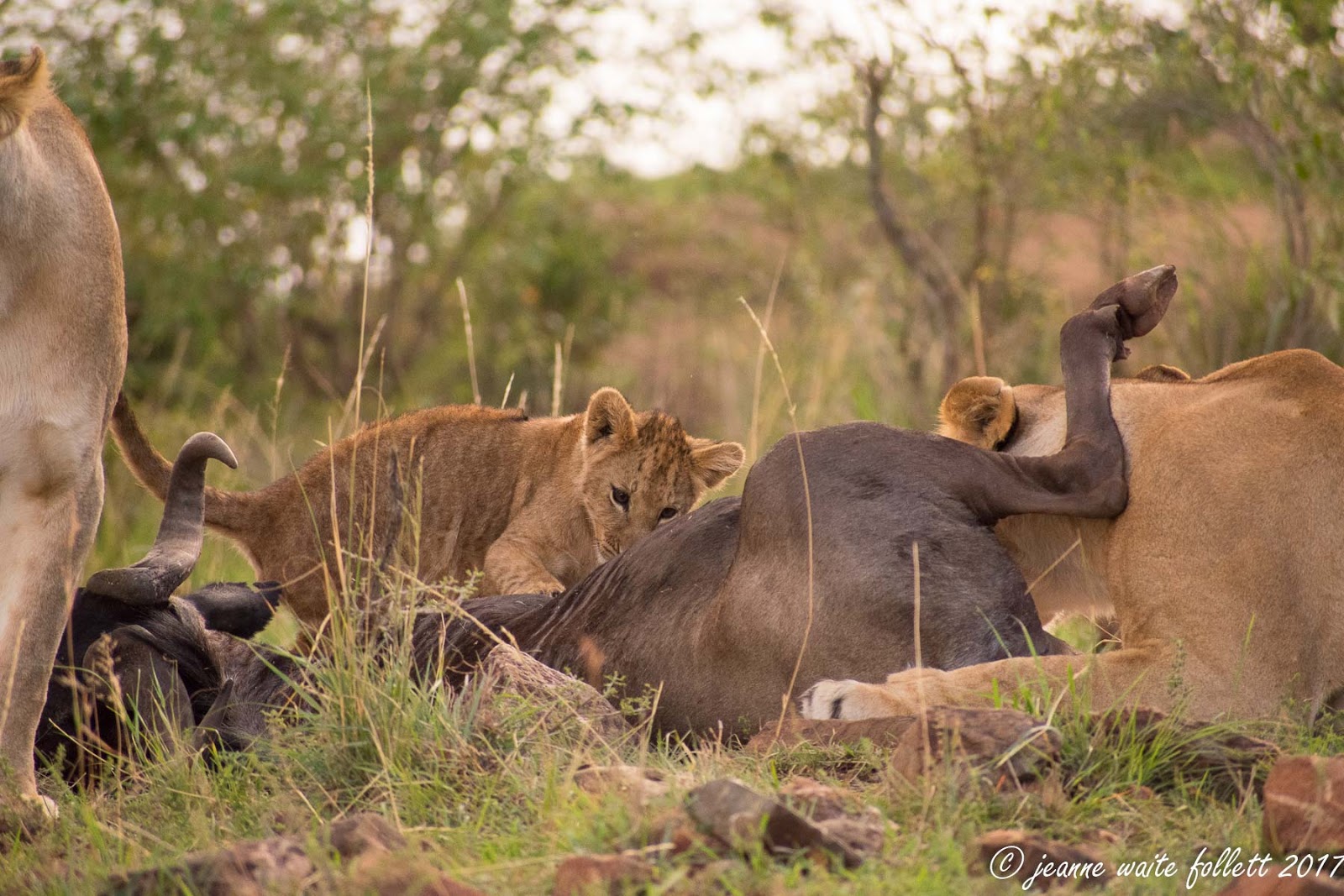 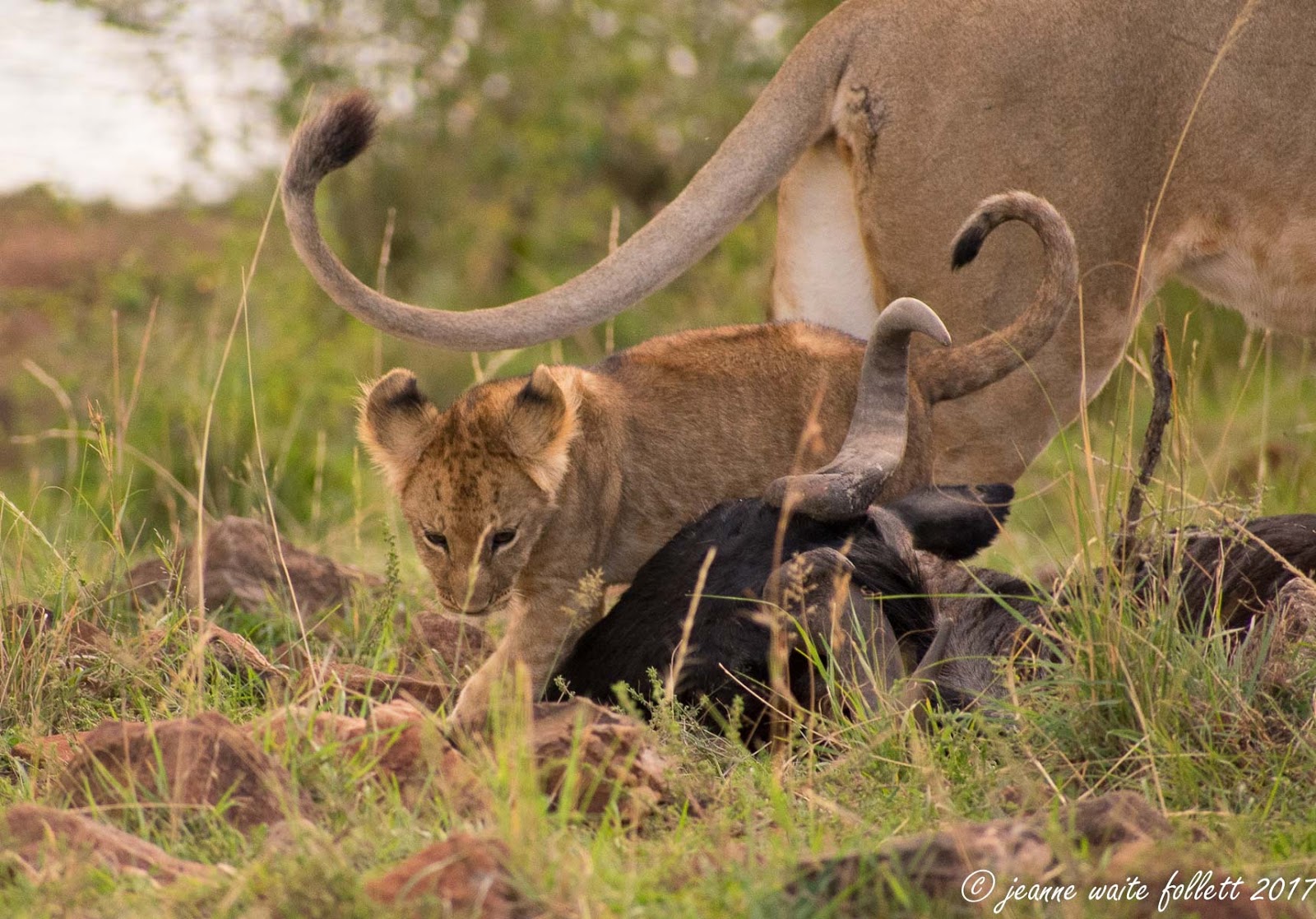 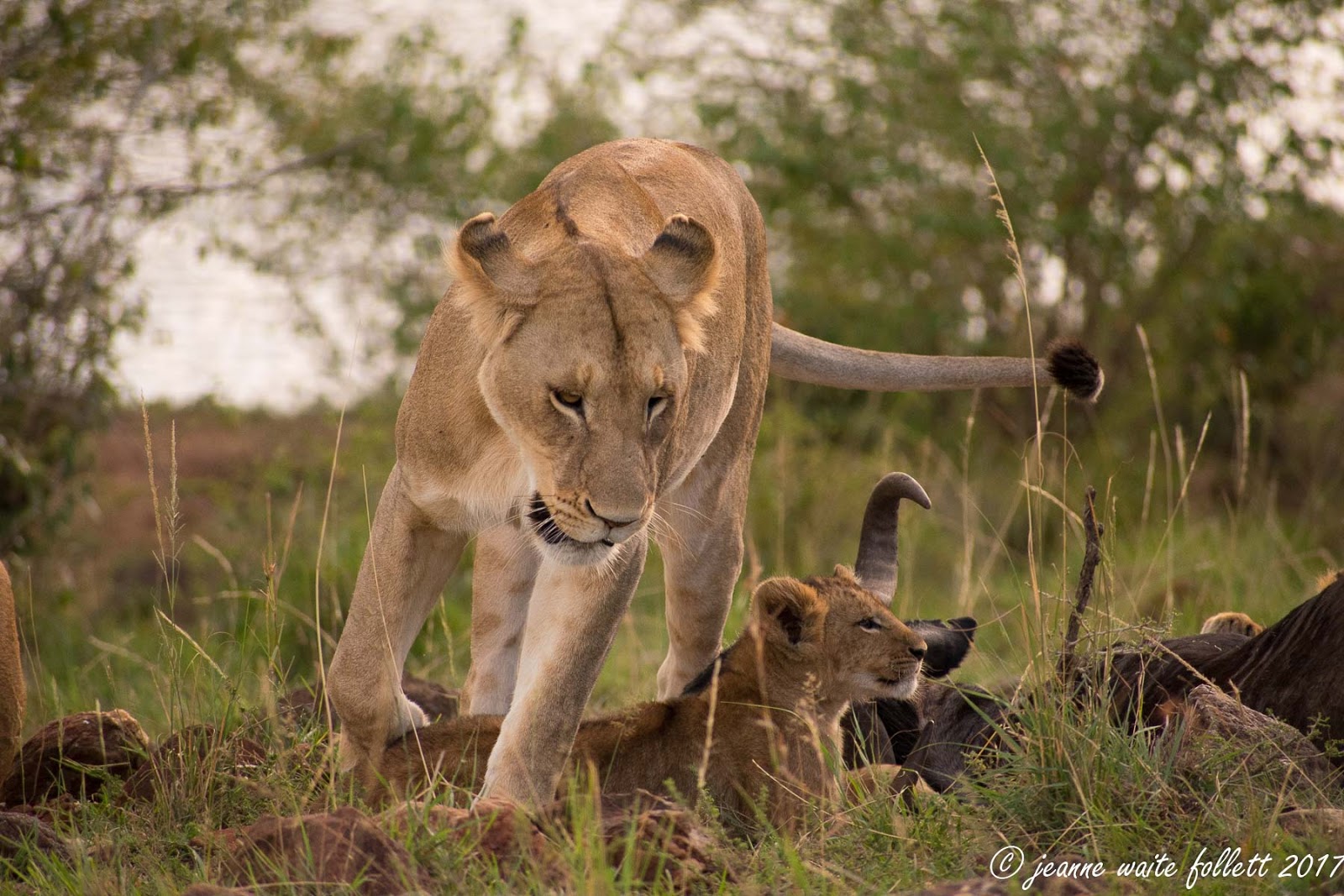 There’s not a lot of action to photograph while the lions feed on the carcass, but the cubs give us plenty of photo ops. 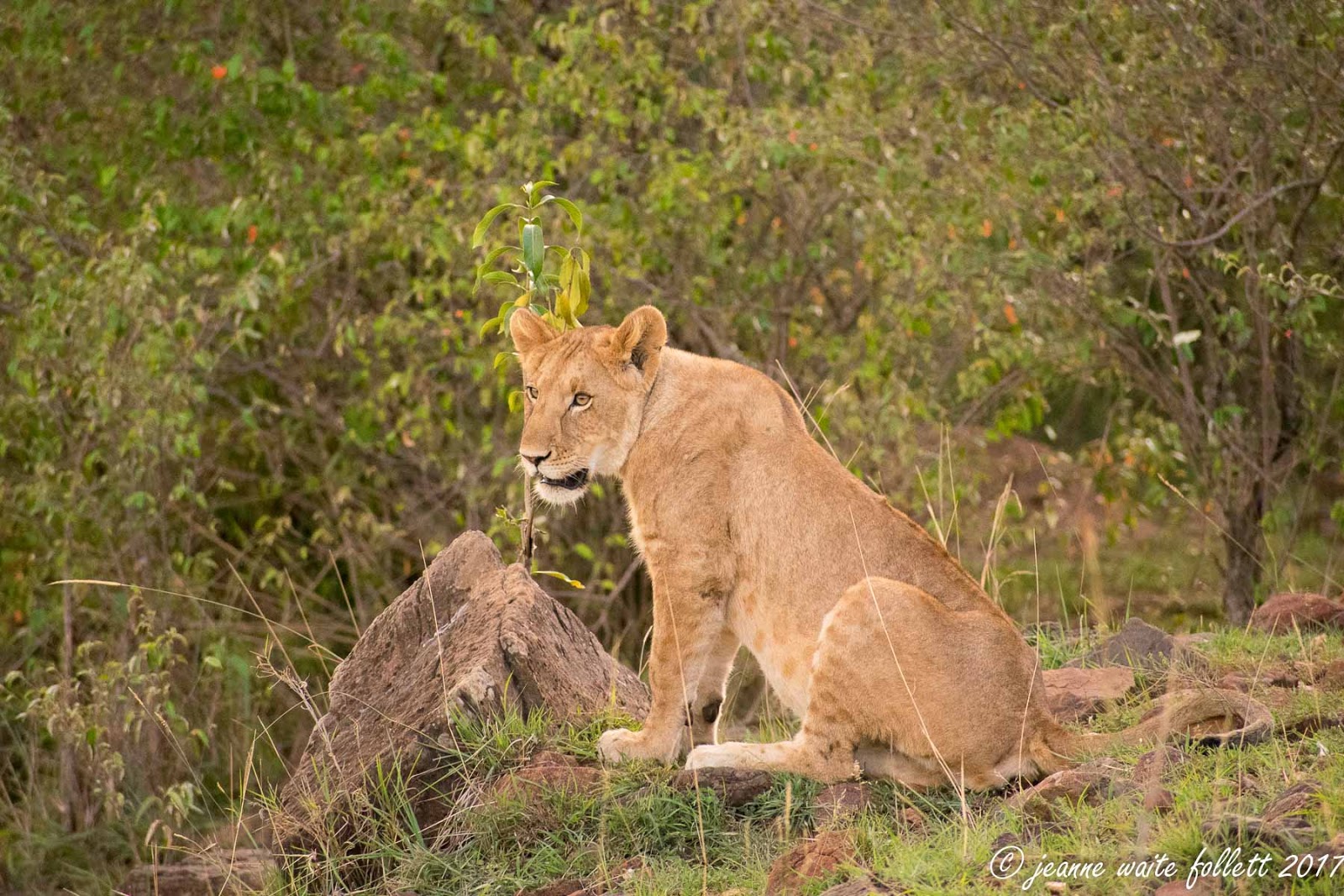 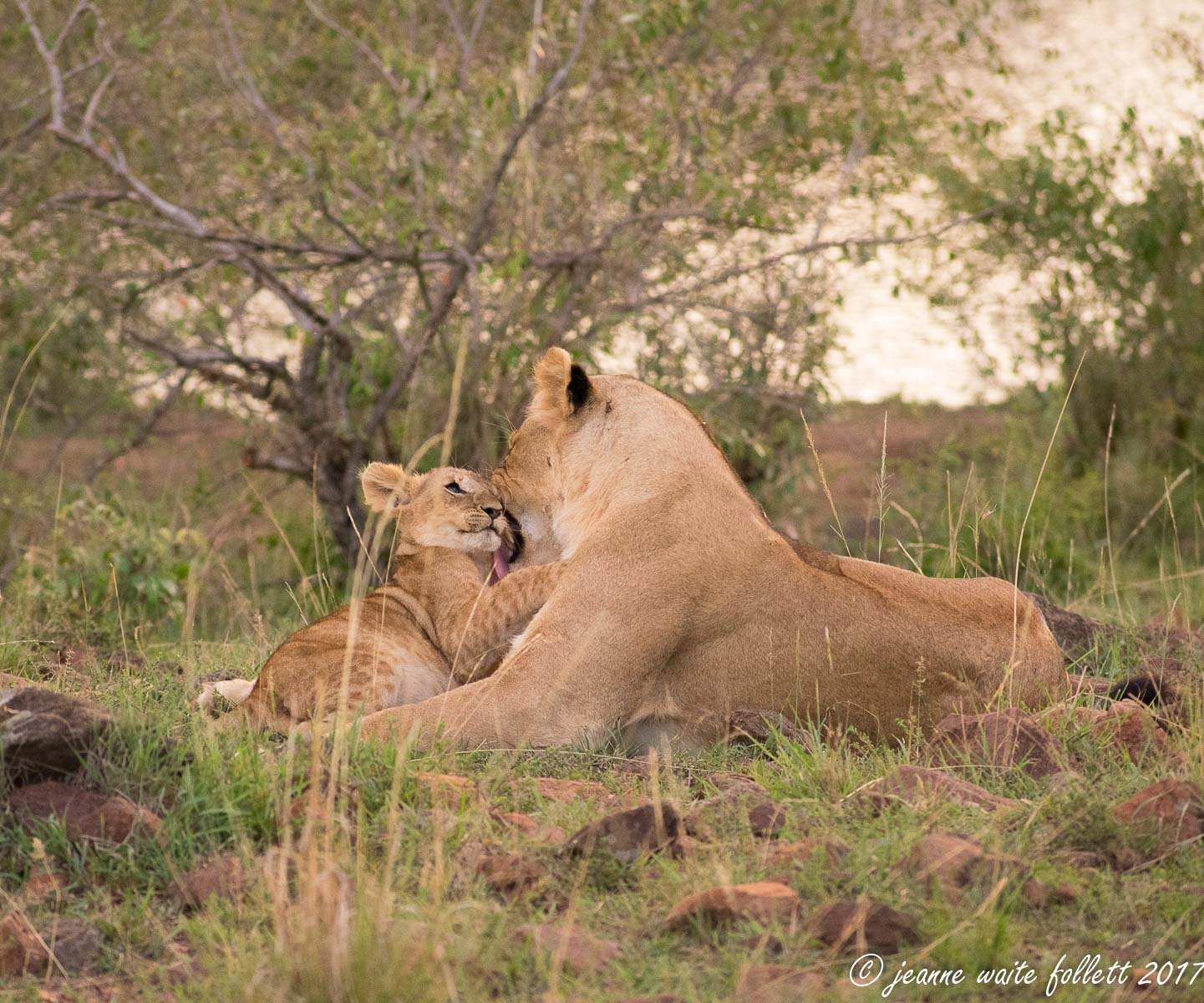 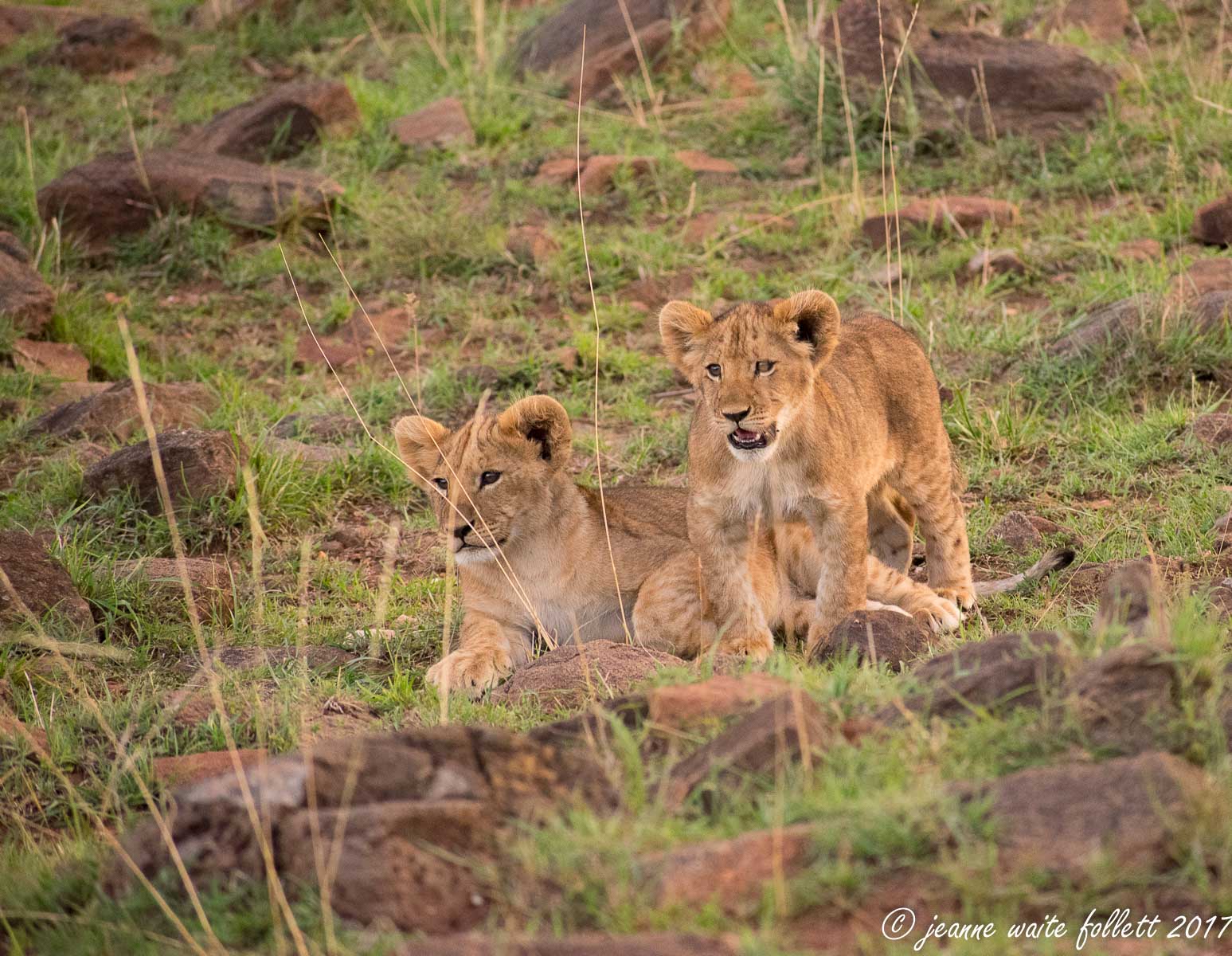 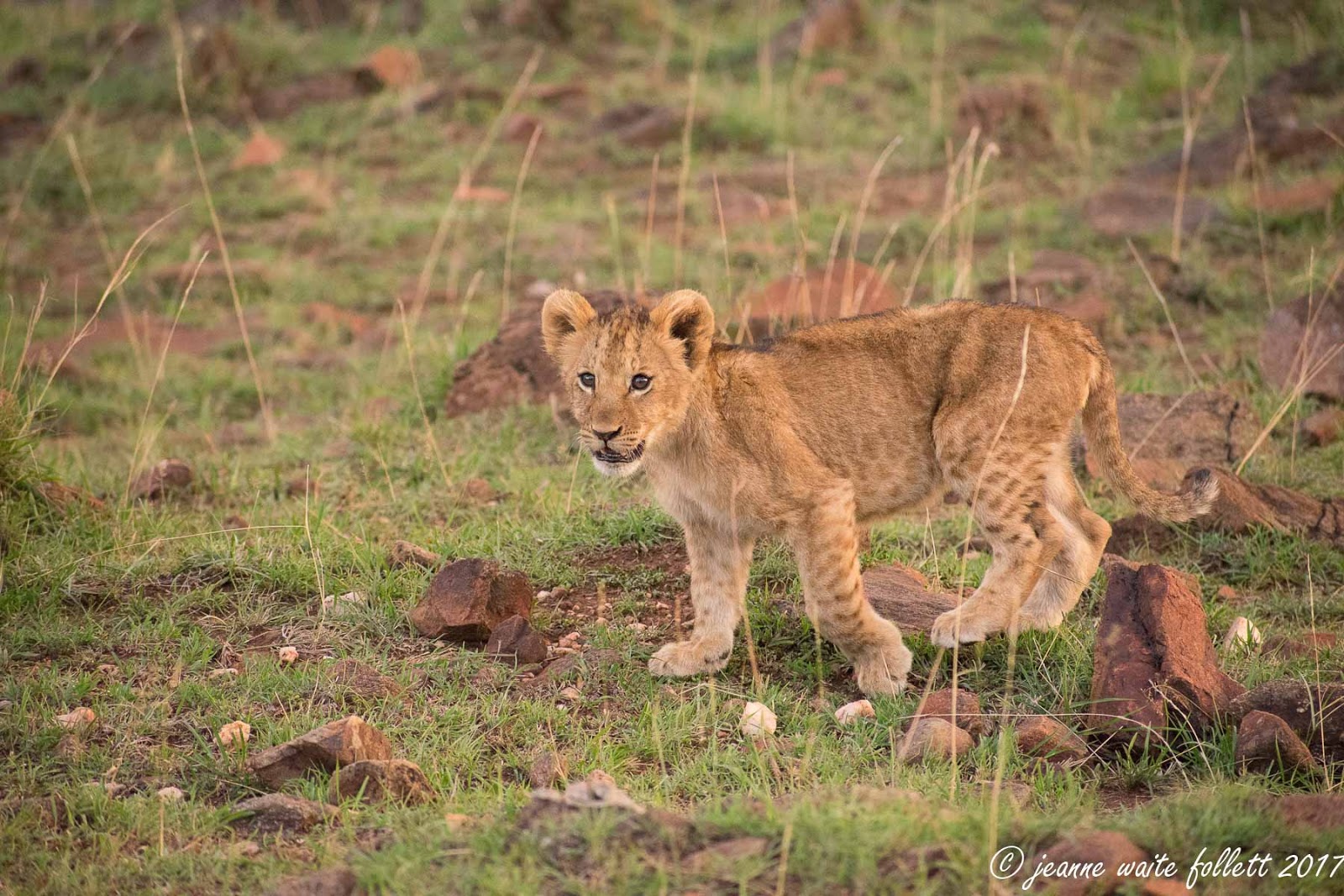 Eventually, the other adults appear to recover from their exertions enough to join in feast, and that one brave cub does too, after being shooed away a couple times. 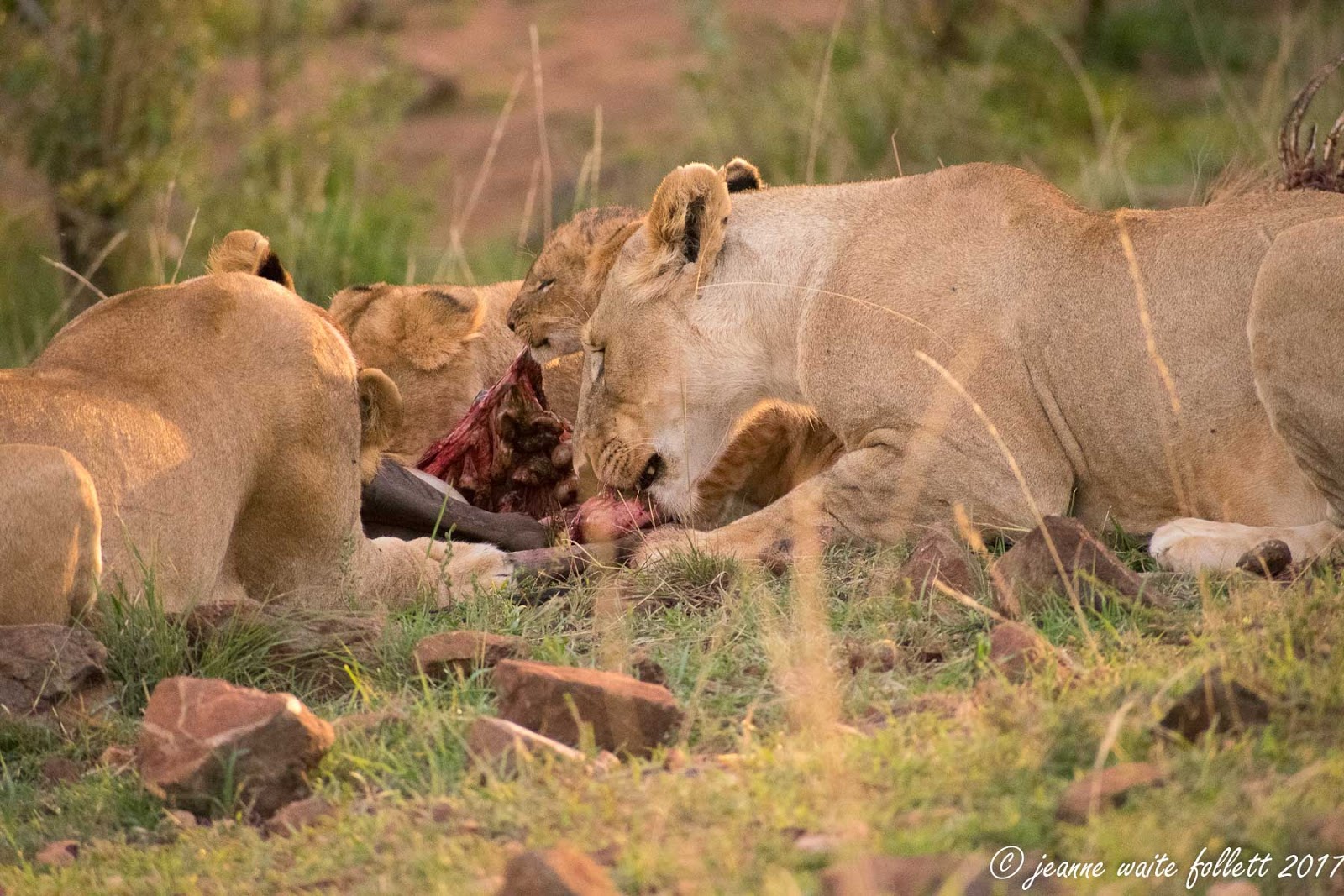 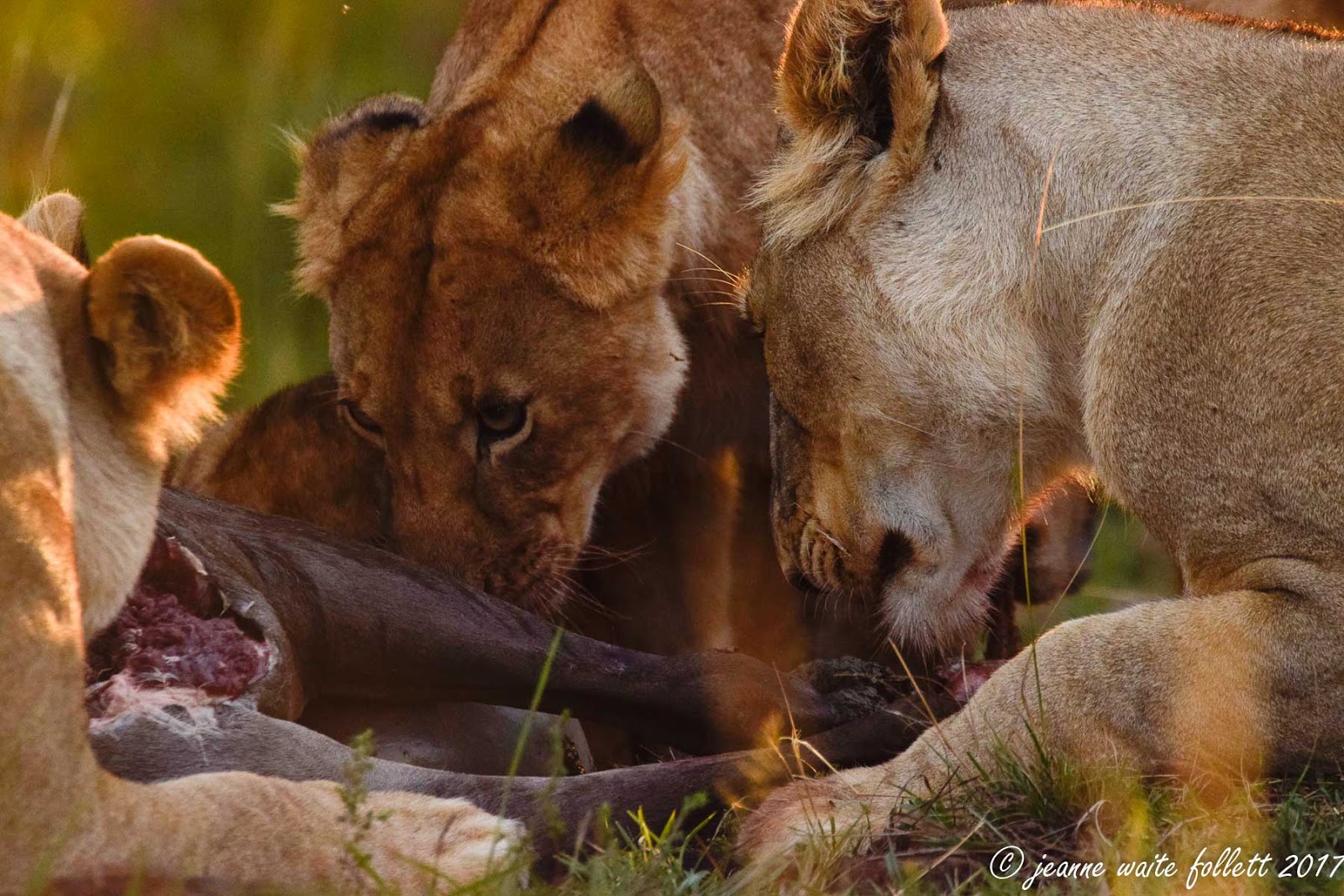 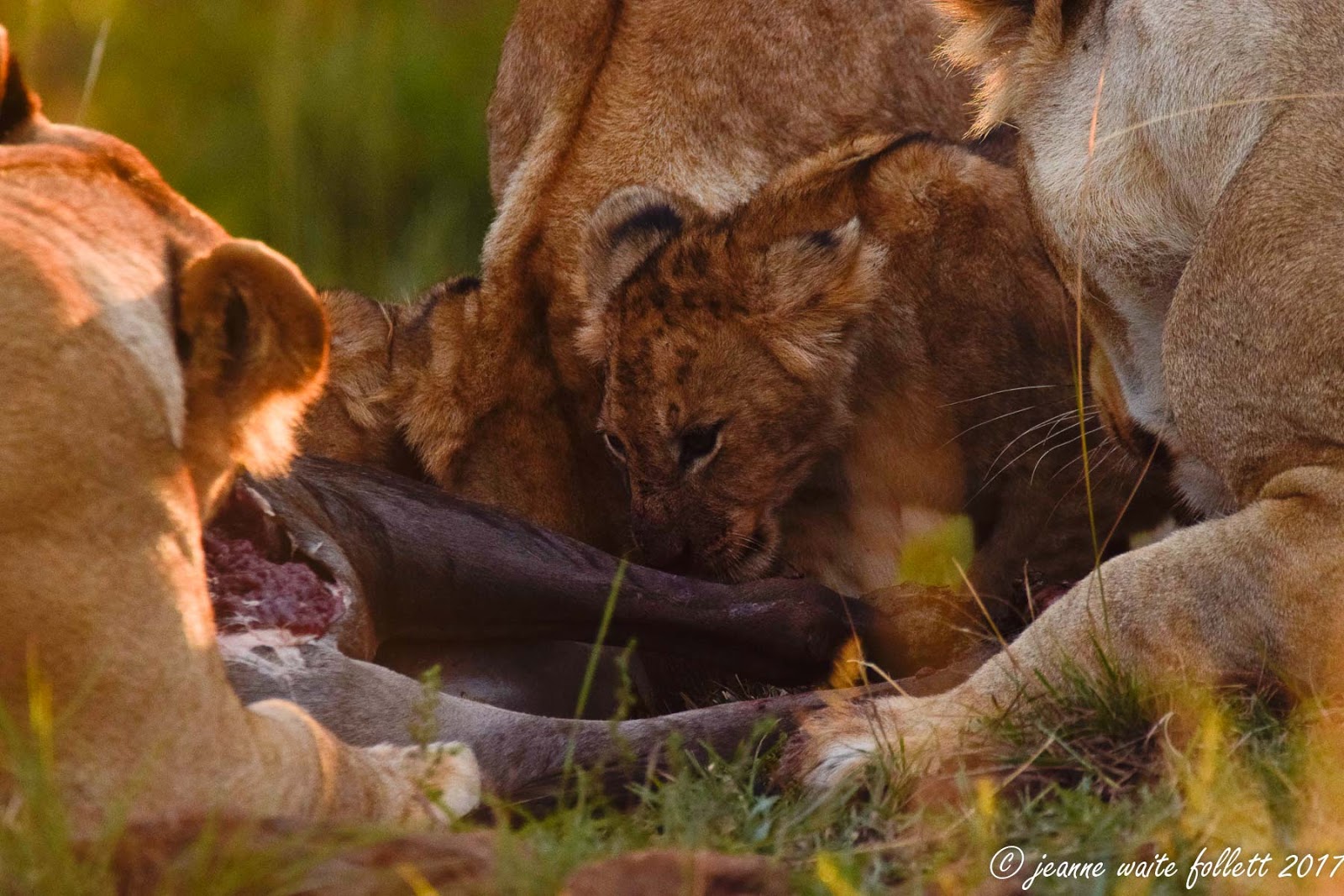 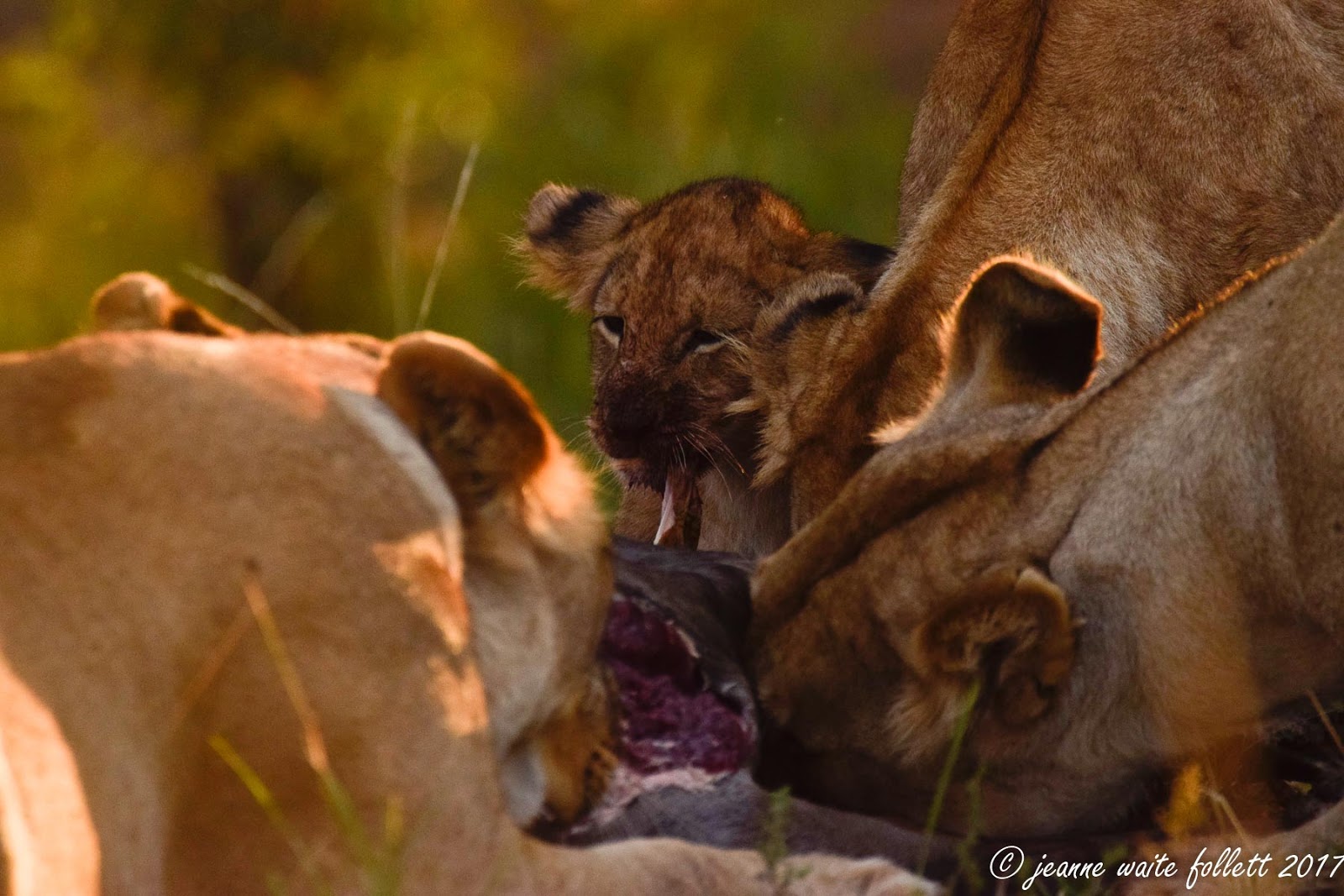 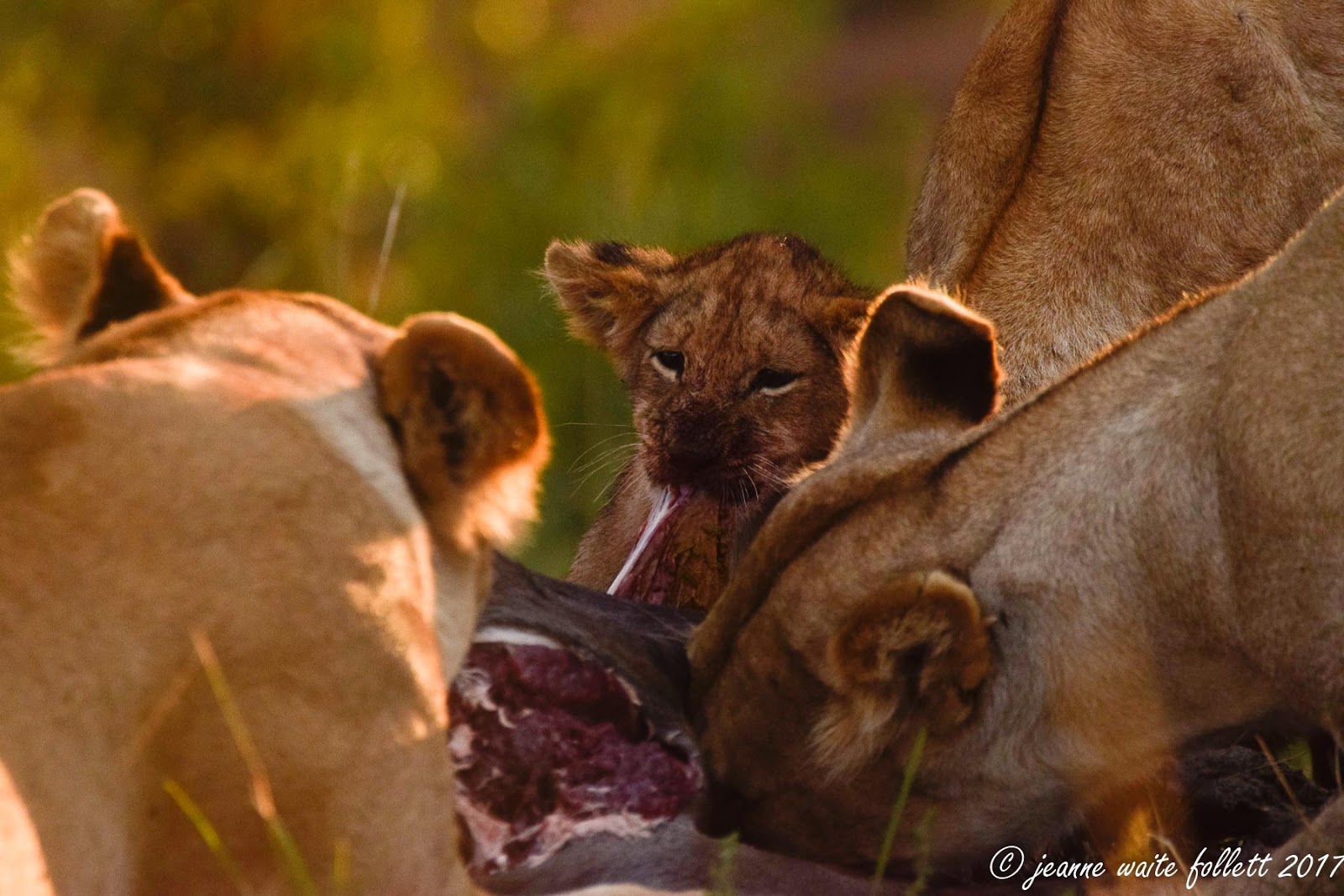 I’m watching and photographing the antics of the other cubs.   They wander down to the river and an adult brings them back.

And then I notice them staring intently across the river. 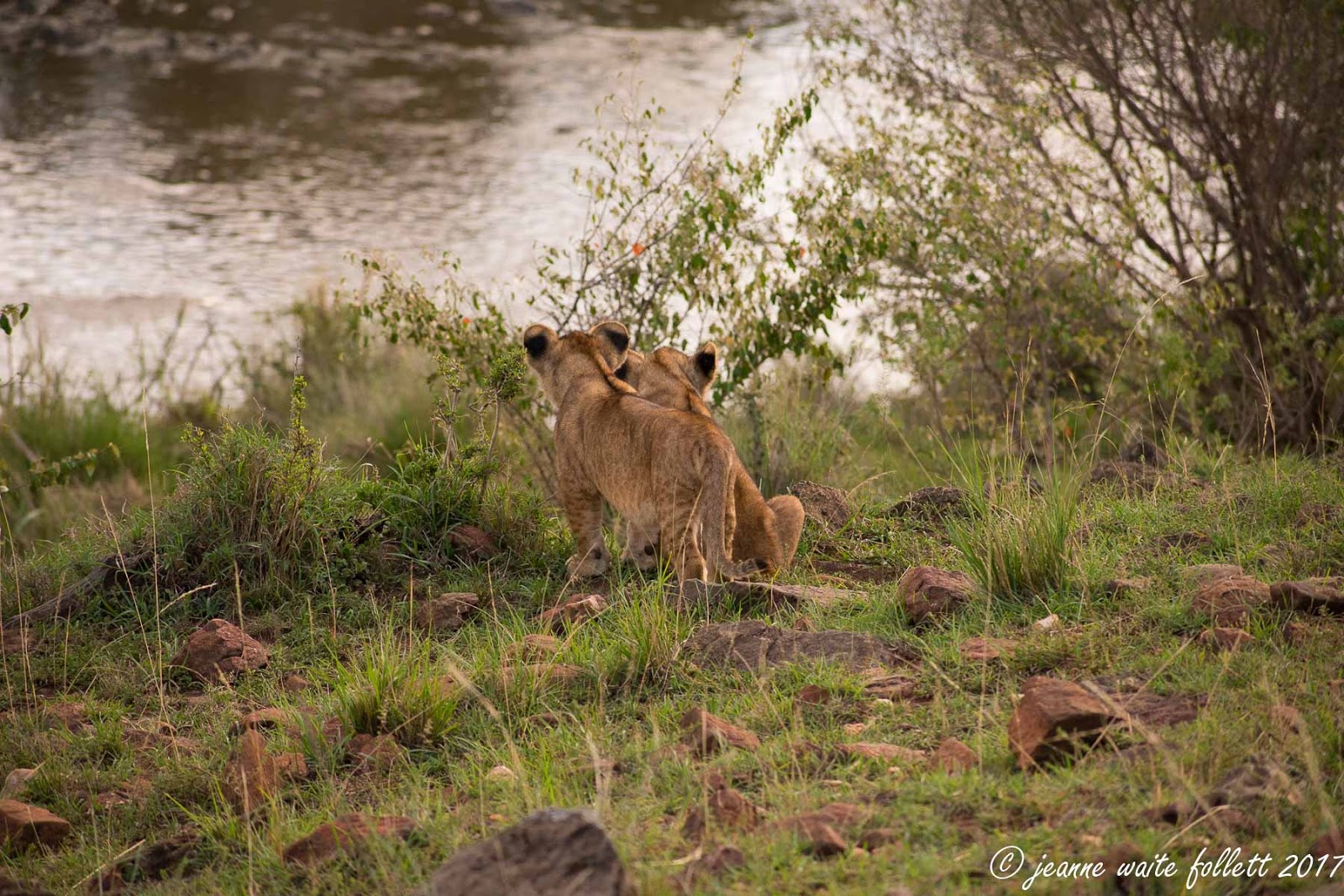