The Kenya Journals, Ch. 13, Growing Up Cheetah on the Masai Mara


Chapter 13
Growing Up Cheetah on the Masai Mara

I love cheetahs. Every moment of every day is spent in fear of dying a terrible death yet they always carry themselves elegantly, remain loyal to their family, and never complain about anything.
—Gregor Collins

“Cheep.”   No bird is making that sound.   A ten-month old cheetah standing atop an old termite mound is calling to its mother, who is nowhere in sight.   A short distance away, its sibling is anxiously looking towards the line of bushes, also trying to find mommy. 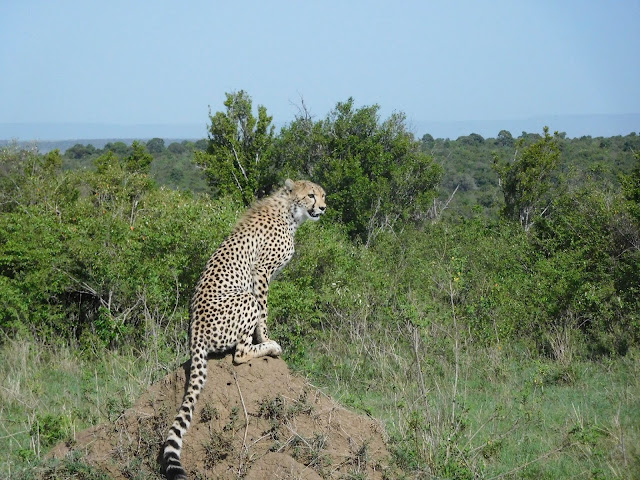 Mommy, Amani, was on the hunt, and this time the two cubs didn’t interfere and ruin it.   But they are distressed.

The whole scene began when we came upon the cheetah far out in the Mara.   We drove around a big loop in the dirt road, trying to get close enough for photos.   The cats were lying down when we first spotted them, but eventually they began to move downhill towards a herd of impala. 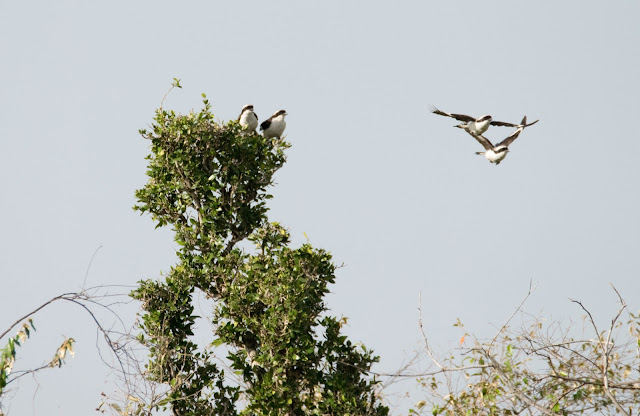 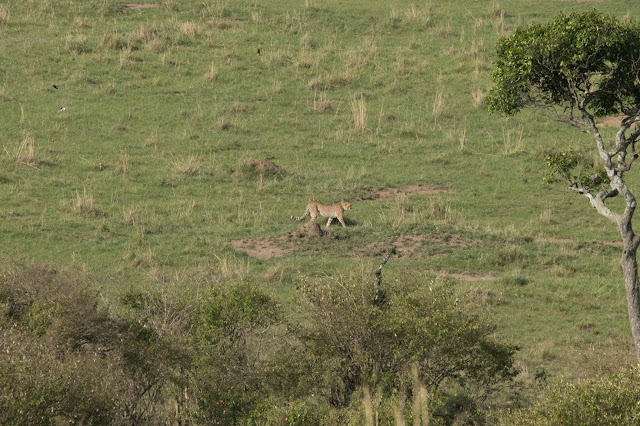 They disappear behind a long row of bushes, so our guide drives down towards the impalas.   Nothing happens.   The impalas obviously haven’t spotted a cheetah. 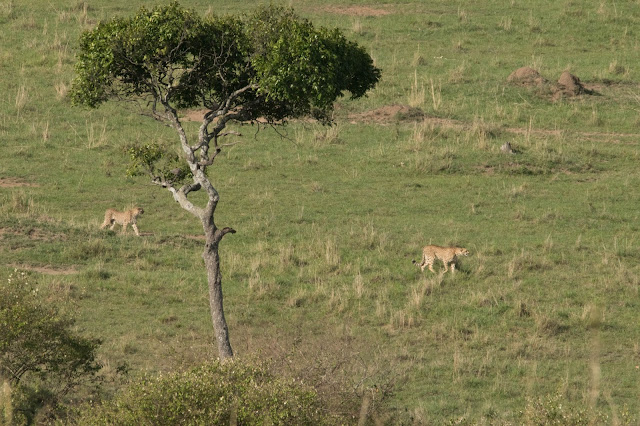 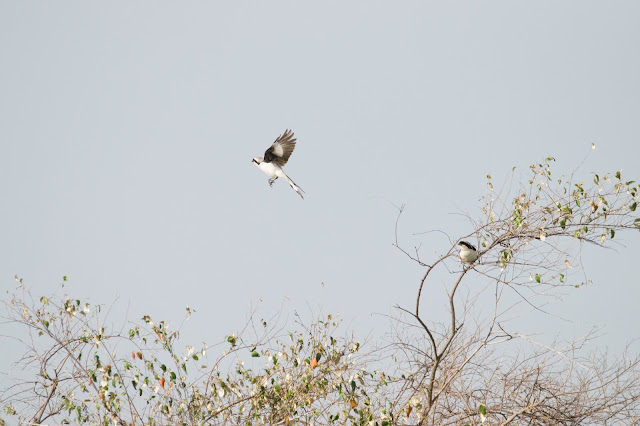 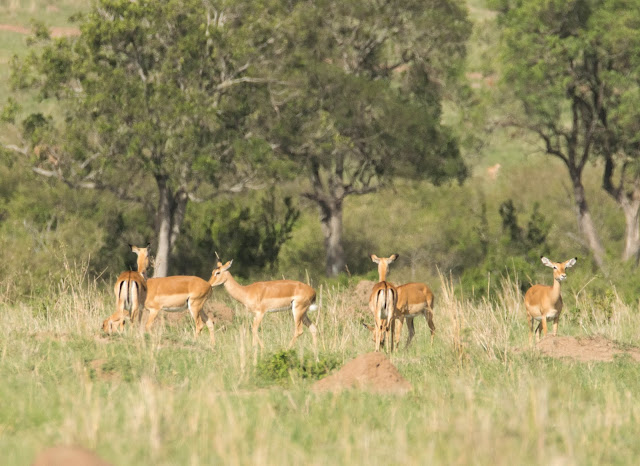 We drive back uphill and find the cubs looking for Amani.   Each sits atop a termite mound looking all around and listening. 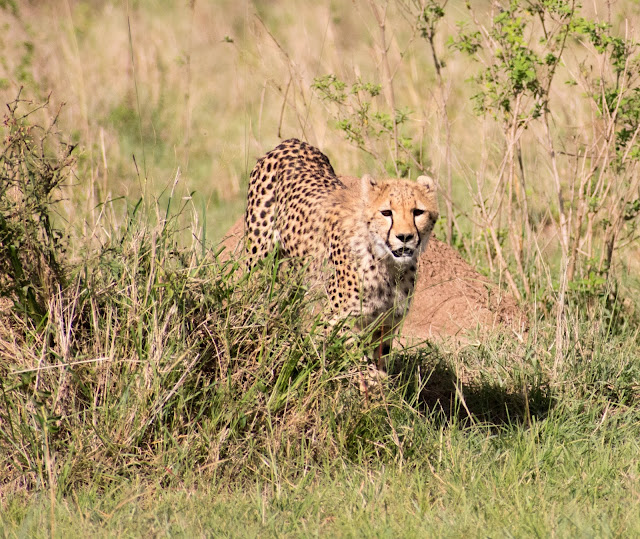 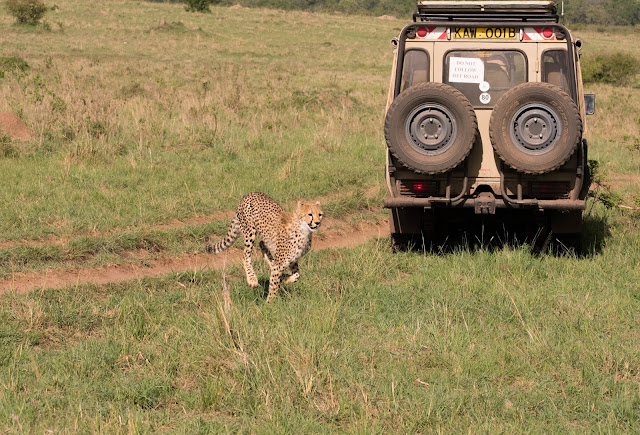 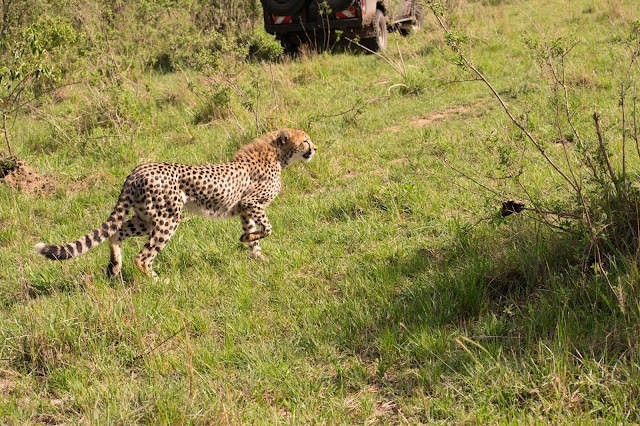 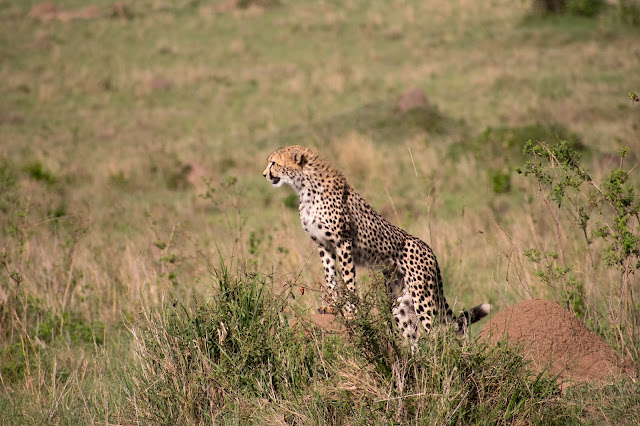 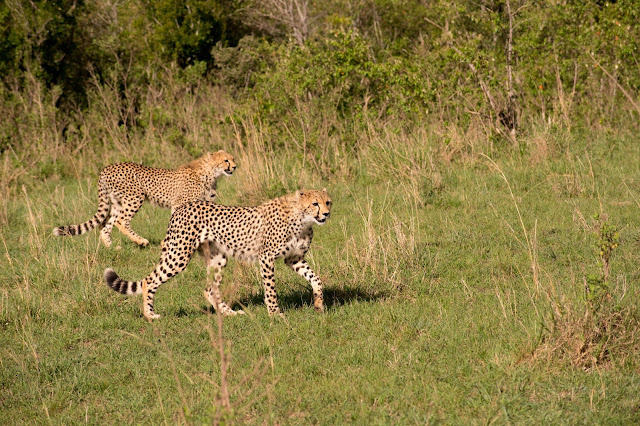 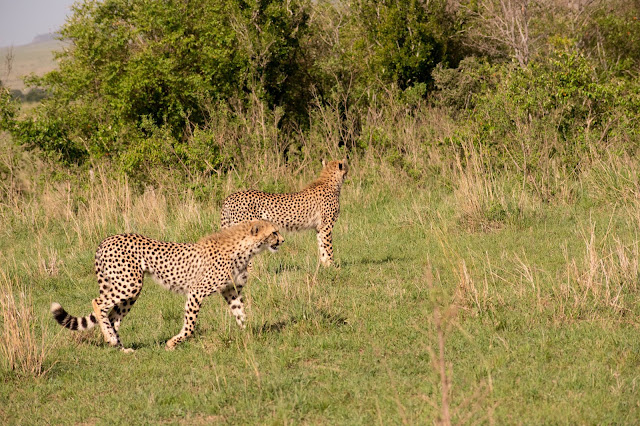 I had no idea a cat could make that sound. 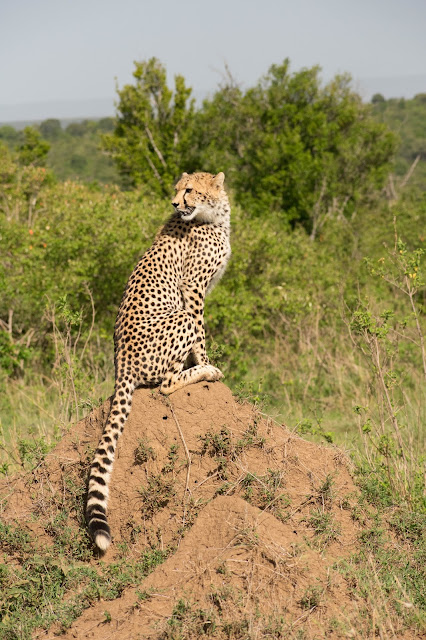 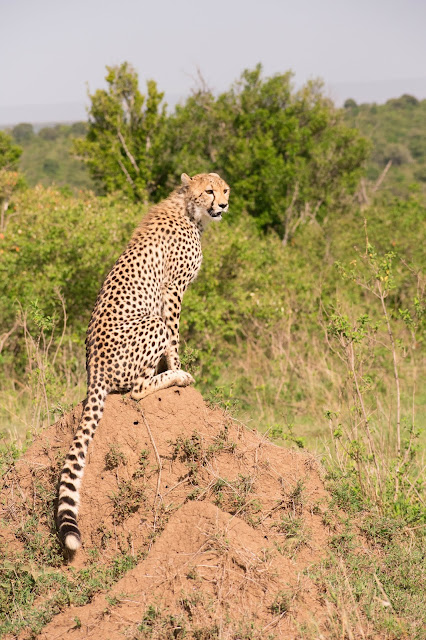 When cheetah mothers think their cubs are old enough to be on their own, she uses tactics to abandon them, like catching prey and disappearing while they are eating or sleeping.

Male cubs independent around 16 months of age, while females often stay with their mother until 24 months.   That is not carved in red dirt of the Mara, because other factors can intervene, such as an adult male cheetah running the cubs off.

Life is hard for cheetahs.   Hyenas and other predators will steal their pray.

Cheetahs are fast, capable of reaching 45mph in 2.5 seconds, and can sustain its top speed of 64 mph only briefly.    While a cheetah's body is 3.5 to 4.5 in length, their tails almost double its total length.

Male cheetahs are social animals, often joining with other males--usually brothers--in a group called a coalition.   Females, however, prefer a solitary life, other than when raising her cubs.

There is a high mortality rate for cheetah cubs, and they are often eaten by lions and hyenas.

The cats are built for speed, with an extra-large heart, nostrils and lungs, and their physical structure is aerodynamic.  Cubs have manes down the back of the neck called a mantle, which is thought to offer protection by appearing to be a honey badger, or adding to their ability to hide in long grass.

The cheetah population is considered to be in decline worldwide.

Today, however, mom has caught a meal and the cubs are soon reunited with her in the dense brush, but they had some anxious moments.