The Kenya Journals, Ch. 9 : Frying Bacon on the Masai Mara


A long time ago, all the animals lived on the land.  The sun was very harsh, but they had tough skin to protect them. Except the hippopotamus.   As he grew, his skin stretched and stretched until it was too thin to protect him from sunburn and the heat.

One day the hippo, suffering terribly from the sun, went to the river and asked if he could live in the water.  All the water creatures said no because they were afraid the hippo would eat all the fish and leave them with none.

“You’ve got Canadian bacon frying back here,” says Marg from the back row of the safari vehicle.  Marg is from Alberta, so she is a Canadian.   And, she's right.  It's a bit cooler when the vehicle is moving.

Ah, yes, it’s hot on the Masai Mara.   And dry, considering there’s been no appreciable rain for two years.  Most of the waterholes are puddles and the creeks are so shallow that the catfish are easy pickings for the saddle-billed storks.

The famous marsh near Governor’s Camp has dried up in most places, but enough water remains that the area still teems with animals and birds.

We humans deal with the heat in our own ways.  I wear a saturated neck band that retains water for a long time and drink bottled water like there soon will be no more.   With the long-sleeved sun protection shirt I wear to prevent more crop circles (dark sun spots) forming on my light Scandinavian skin, I'm relatively comfortable.  This, from a life-long Northerner who hides in her house when the temps reach the upper 70s.

We asked the guides to bring both cold and frozen bottles of water and that really helps.  Also, we asked the driver/guide of the women's safari vehicle to please close the canvas top to provide protection from direct sunlight.

Mary, who really suffers from the heat, holds a bag full of ice cubes on her face or neck.   She slips cubes down the front of her tee shirt, and she takes cold showers whenever time allows.

Marg, despite her funny remark, is a veteran traveler to Africa and takes it in stride.   The guys appear oblivious, though Greg does ask me about my neck band.   The guy's vehicle has the top rolled back and open because they like to stand and take photos.

As for the permanent residents of the Mara, again they deal with it according to species.   The big cats appear to be affected the most and prefer to find shade and sleep away the day.    They, along with the leopards, hunt at night.

The cheetahs, however, hunt in the daytime.   After a chase, a cheetah might take as long as a half hour to catch its breath before it can eat its kill.  Like most animals, cheetahs find shade and relax. 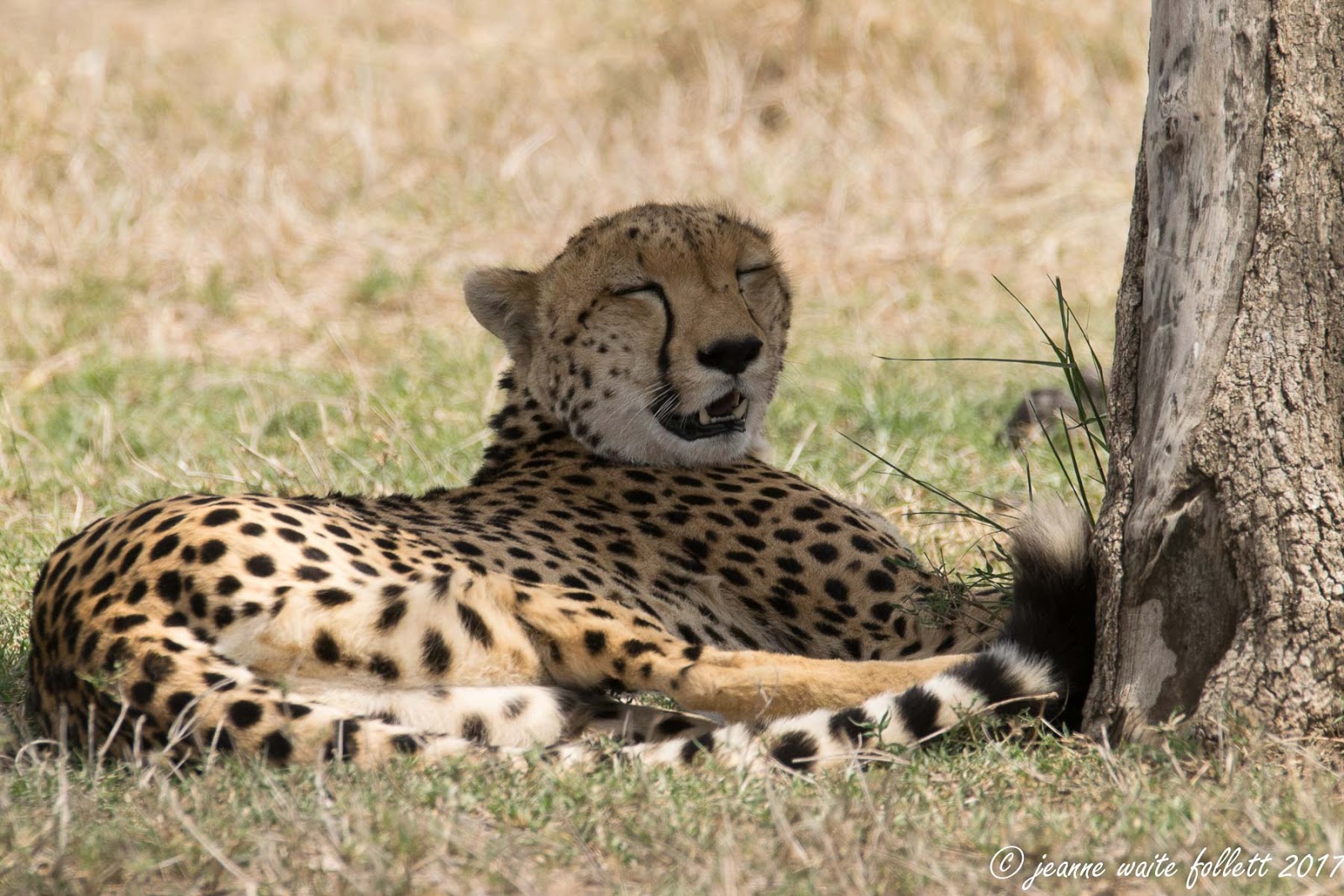 Elephants roll in water and mud, coating their hides to protect from sunburn and insects.  Hyenas and warthogs do the same to cool off.

Some animals move into the shade of forested areas along water sources.

And then there are the hippopotamae, whose name comes from the Greek for “river horse.”  Despite their obvious resemblance to pigs, their closest relatives are cetaceans such as whales and porpoises. 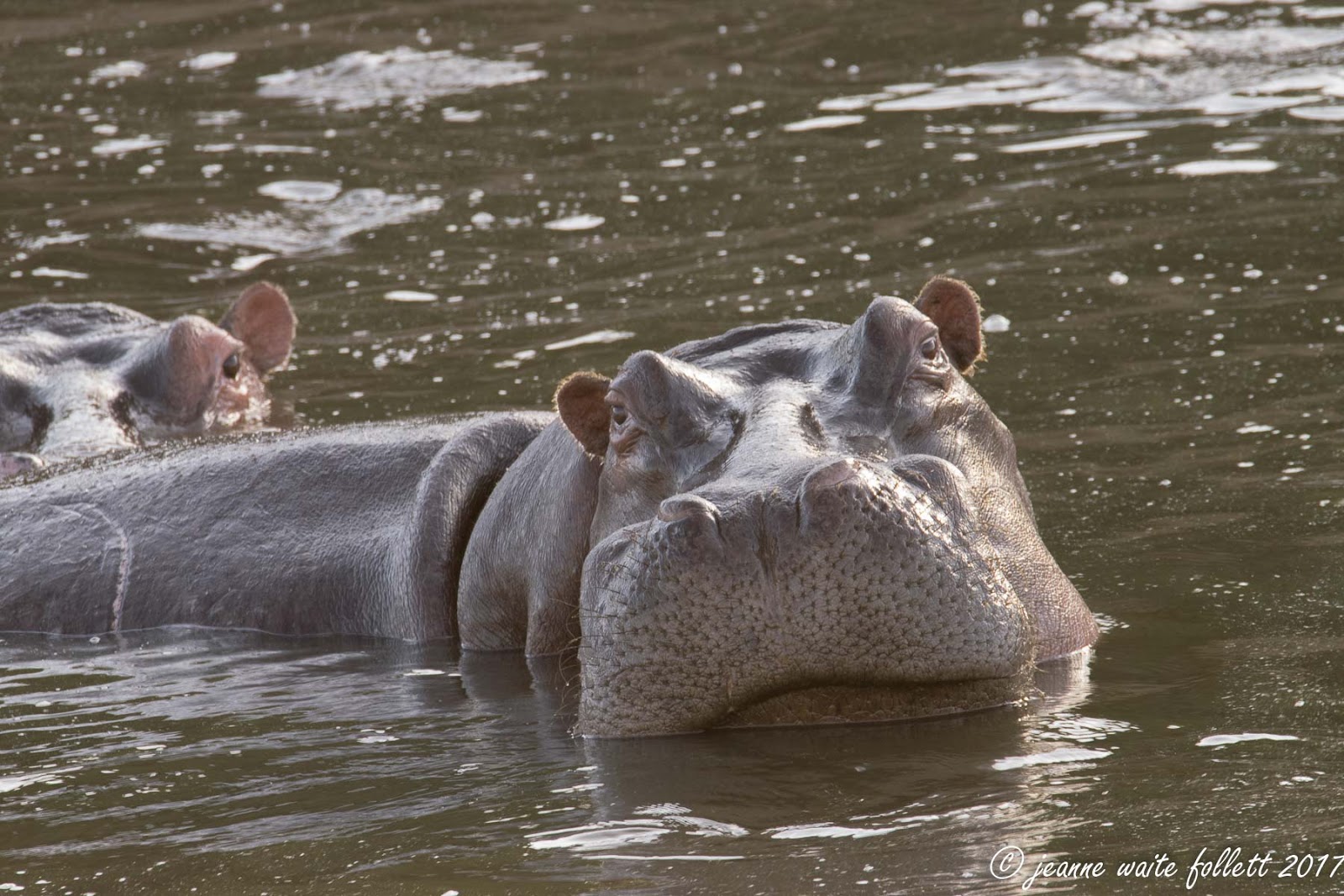 Though adult males can weigh 5000 to 8000 lbs., and they have short, stubby legs, hippos are impressively fast on land and are capable of running 19 mph over a short distance.  They are massive animals, next in line to elephants and rhinos as the largest land creatures.   If you're brave, or stupid, enough to walk up to one with a tape measure, you'll find they are between 9 and 14 feet long.  However, sources vary greatly in all these weights and measures.

Hippos often appear to be sweating blood, but it is actually a secretion that  is thought to be an antibiotic, sunscreen, and skin moisturizer.   It turns red after it is secreted.

Just like you always thought, the hide on these hippos will crack if it dries out, much like an over-stuffed sausage, which they resemble.

They prefer to remain in water during the daytime, and emerge in the evening to graze on grasses during the night. 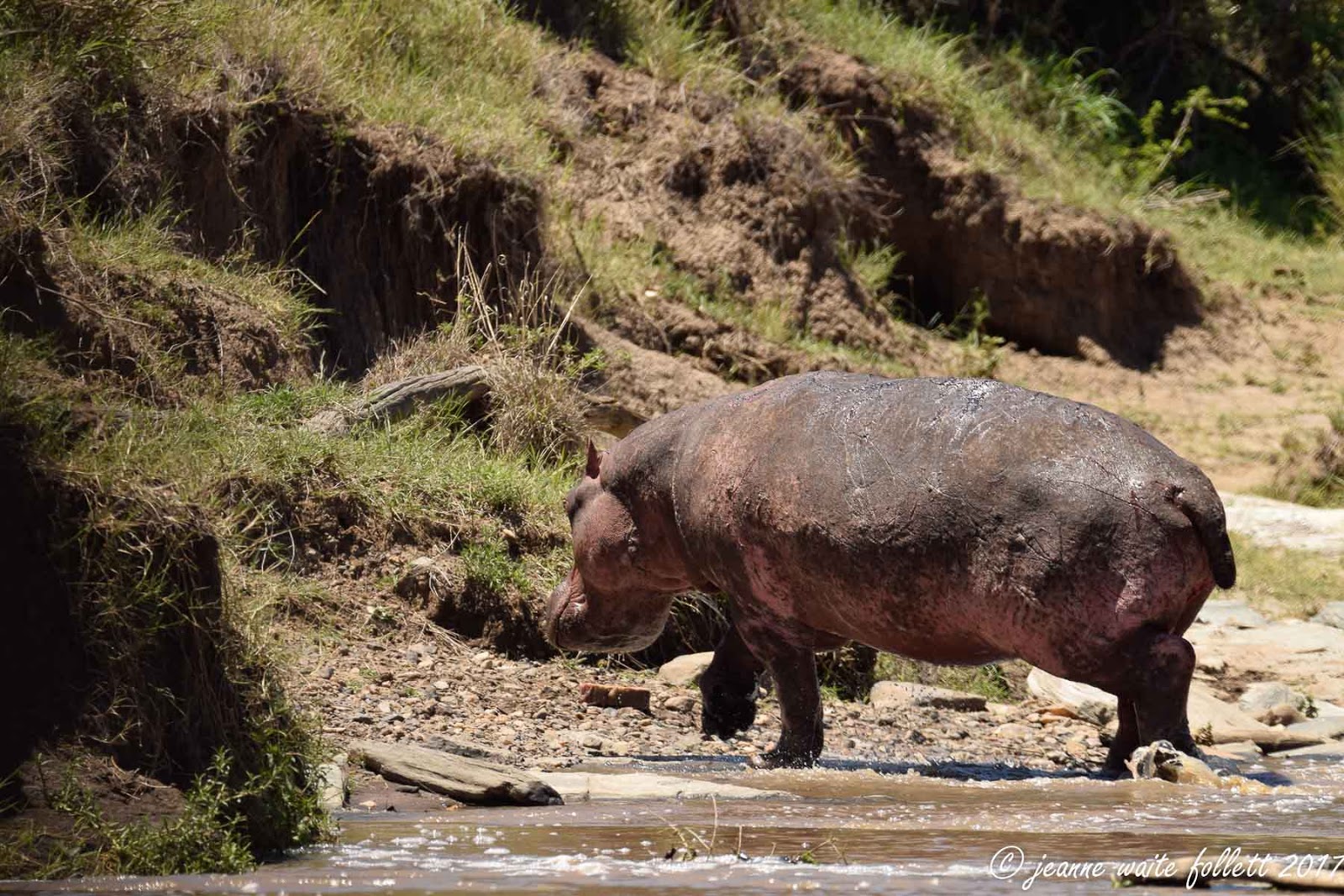 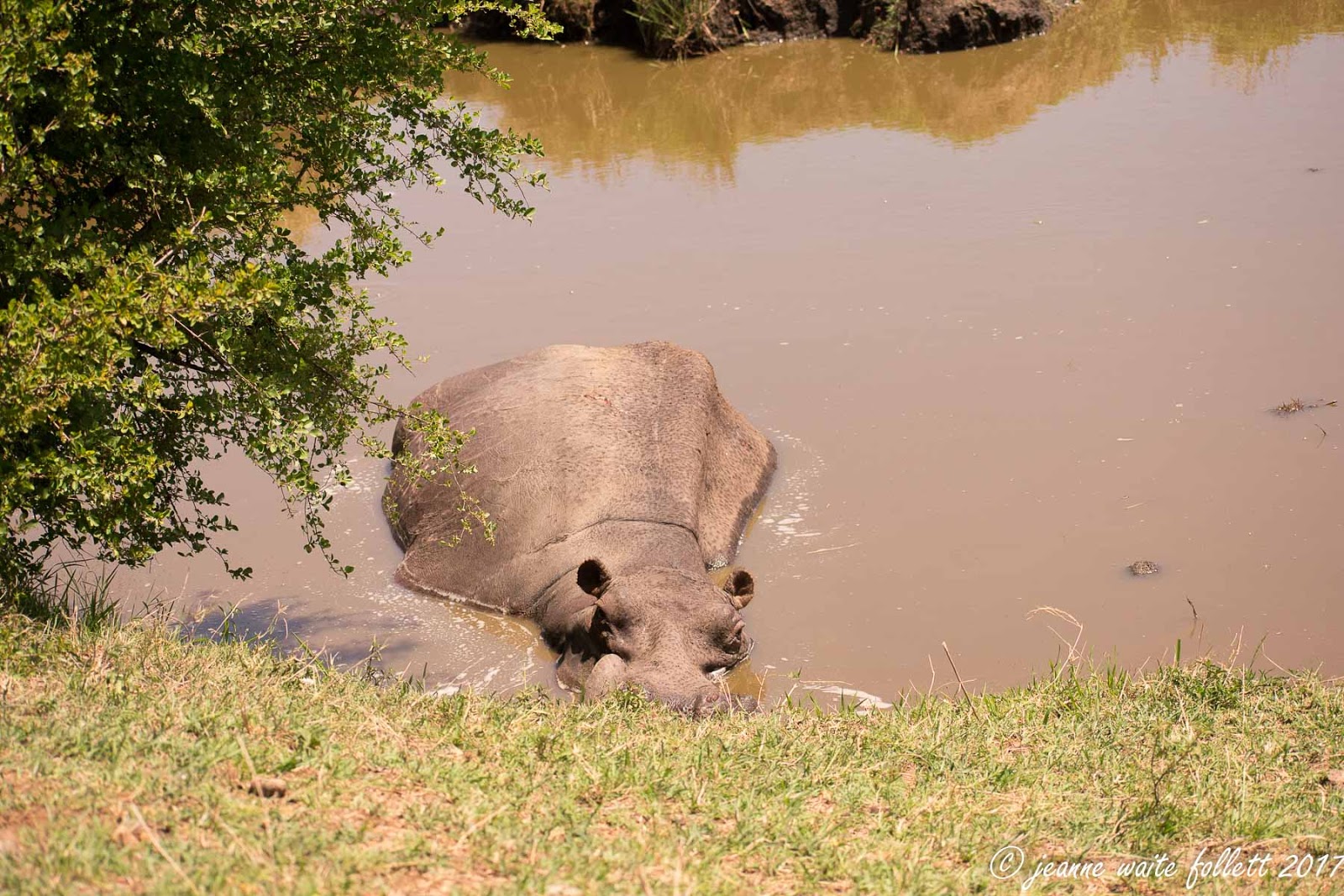 (Video:   A very tired hippo that probably grazed  too far during the night, makes its way to water.   I will admit that I felt very sorry for this hippo and hoped our stopping to observe didn't add any steps to its journey.)

Unlike Marg, hippos  are extremely temperamental.   They are considered one of the three  most dangerous animals in Africa and are known to capsize boats.   It is estimated that hippos kill some 3000 people a year.

Territorial bulls preside over a particular stretch of water with many cows and young. 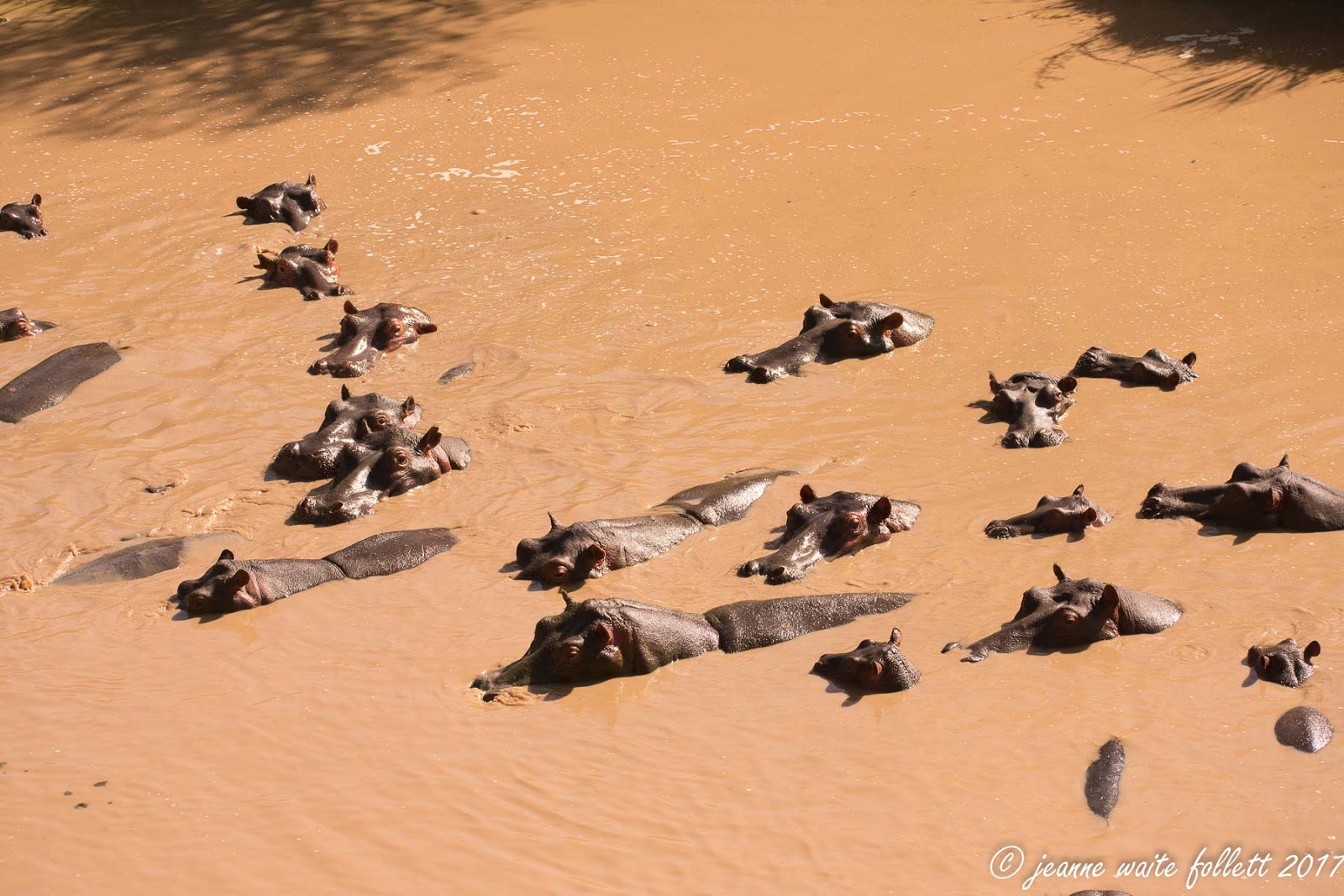 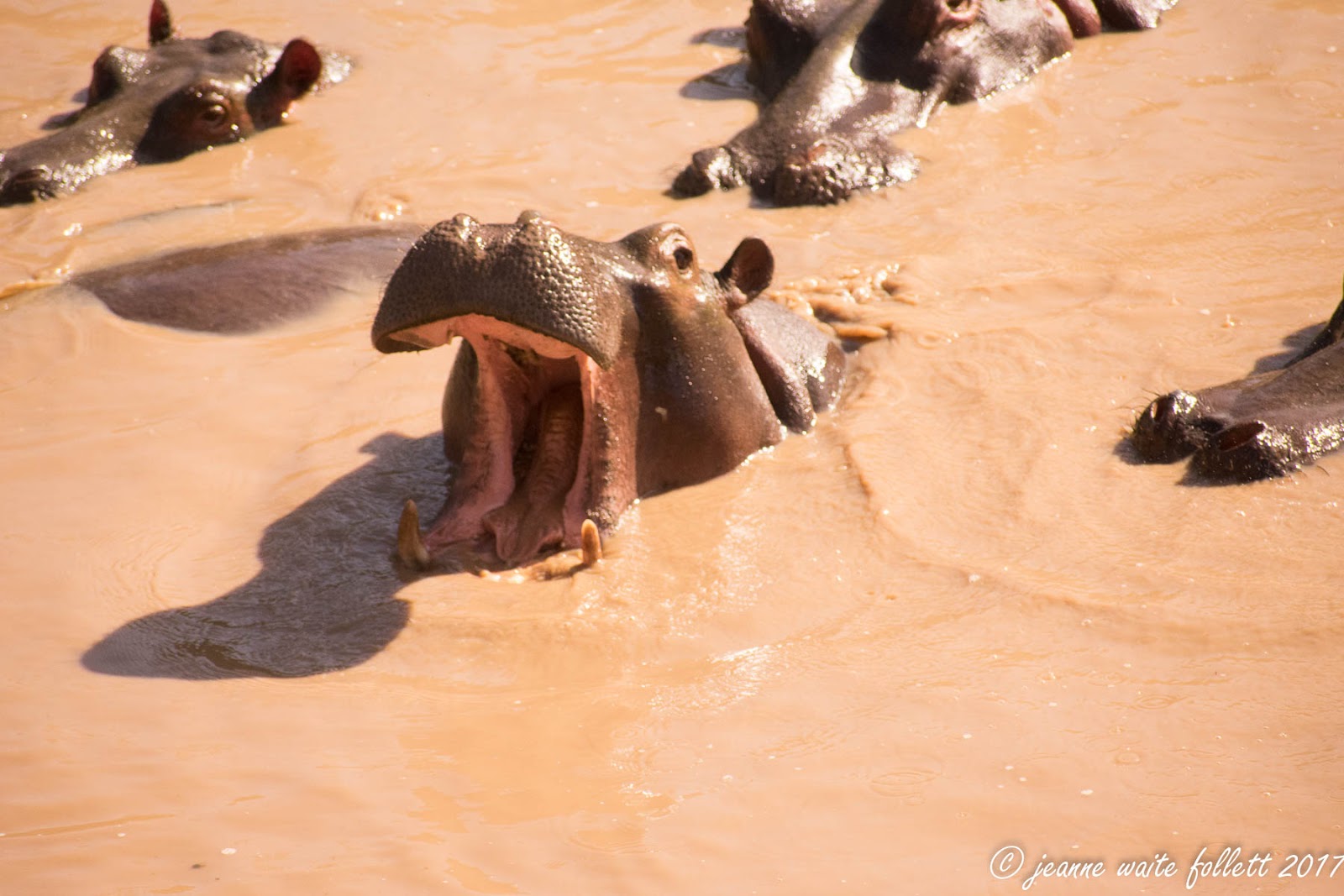 Their eyes, ears, and nostrils are place high on their skulls, enabling the animal to submerge most of its body. 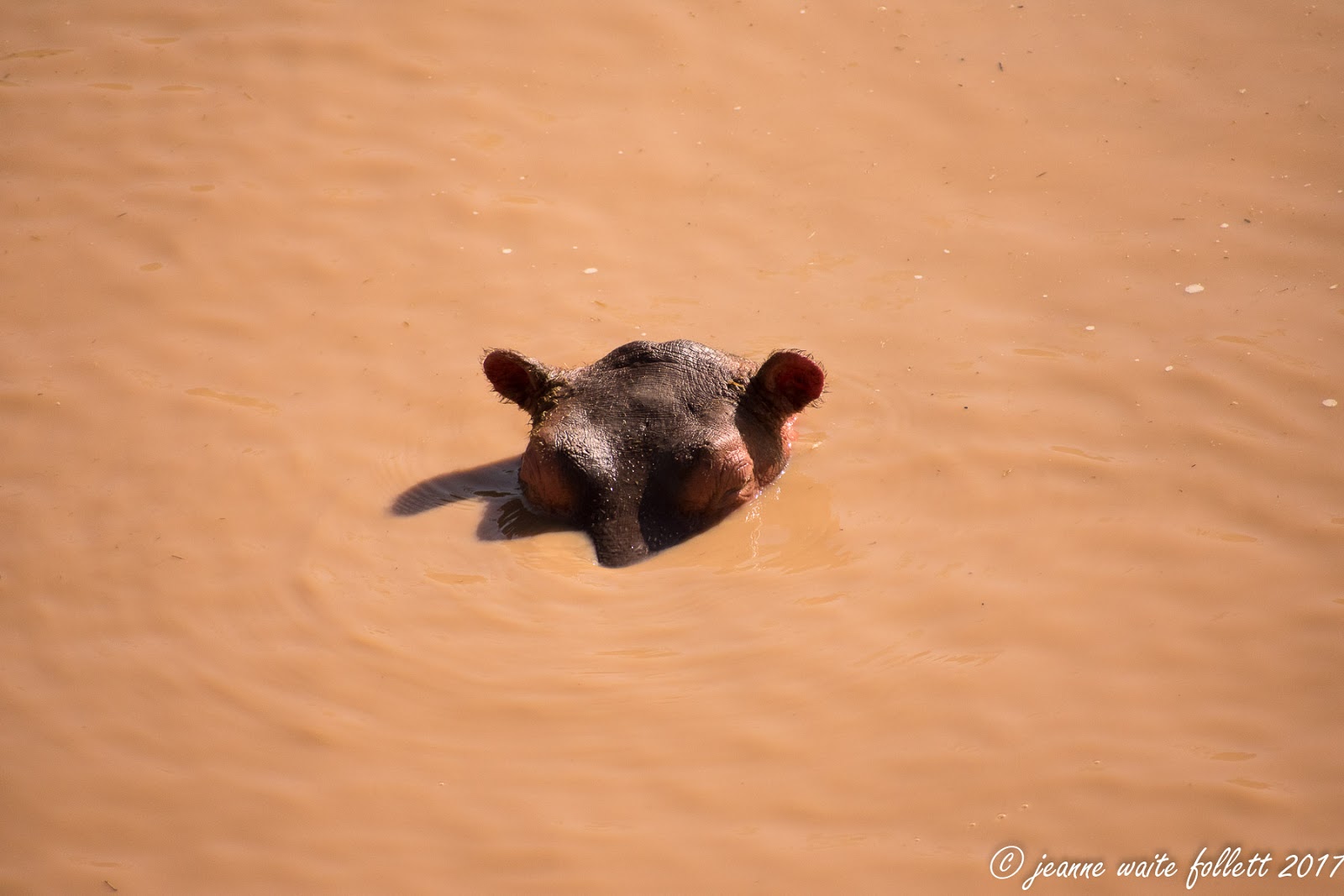 A hippo’s teeth are an orthodontist’s nightmare, with large canines and incisors.   The canines can reach more than a foot in length and are used or fighting.   Their teeth lay no part in grazing.   Instead, their thick lips pull grasses which are then ground by molars. 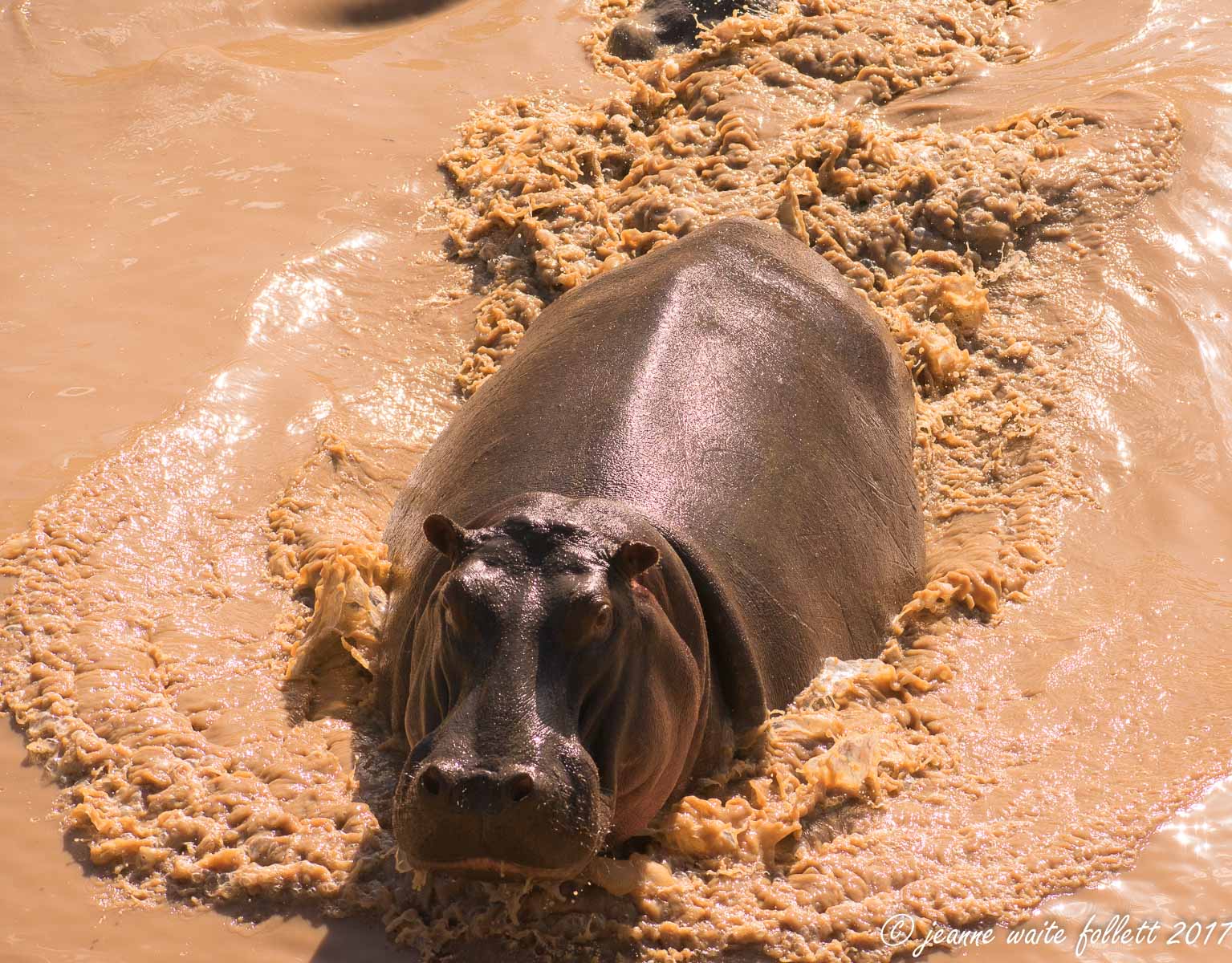 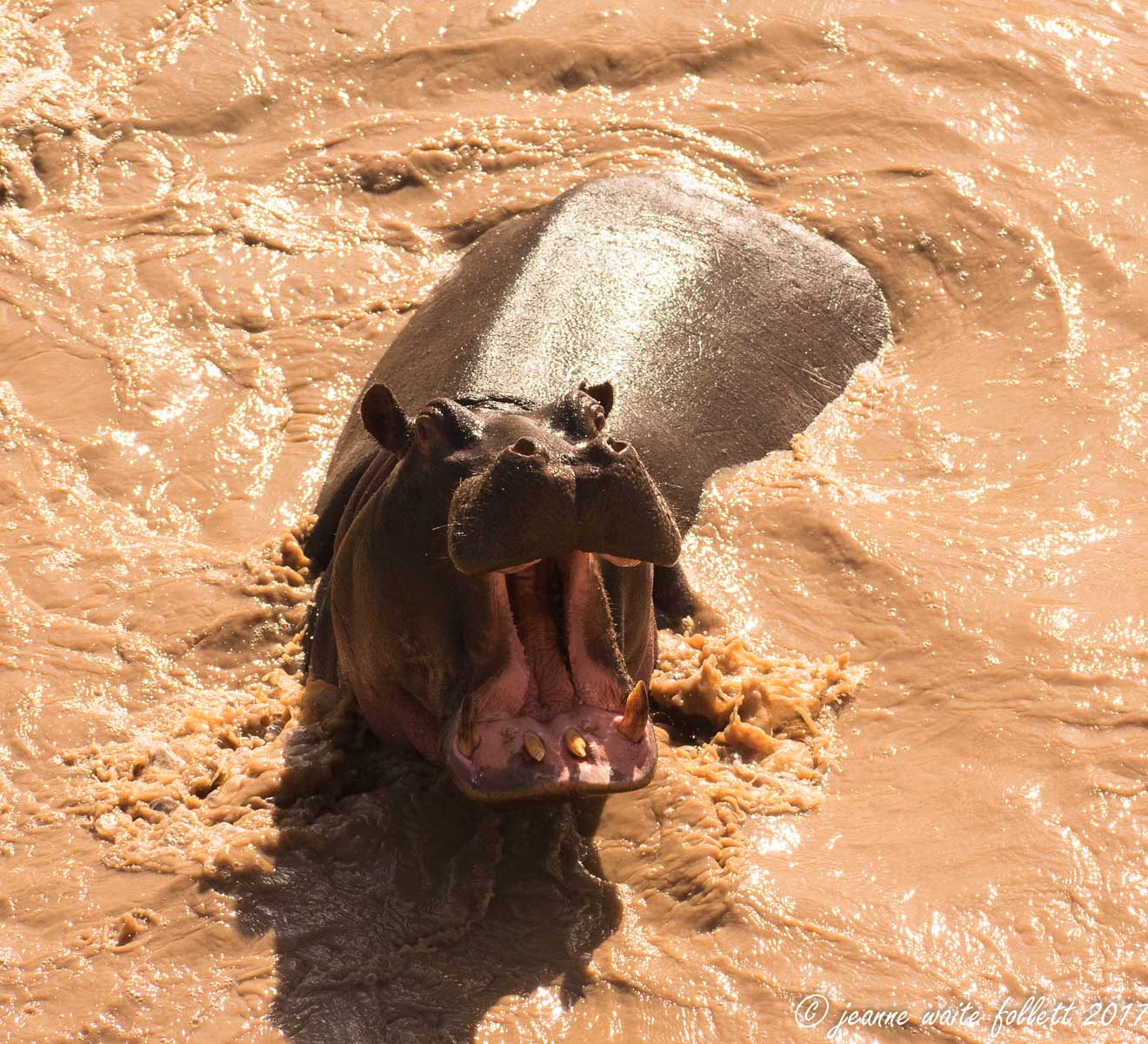 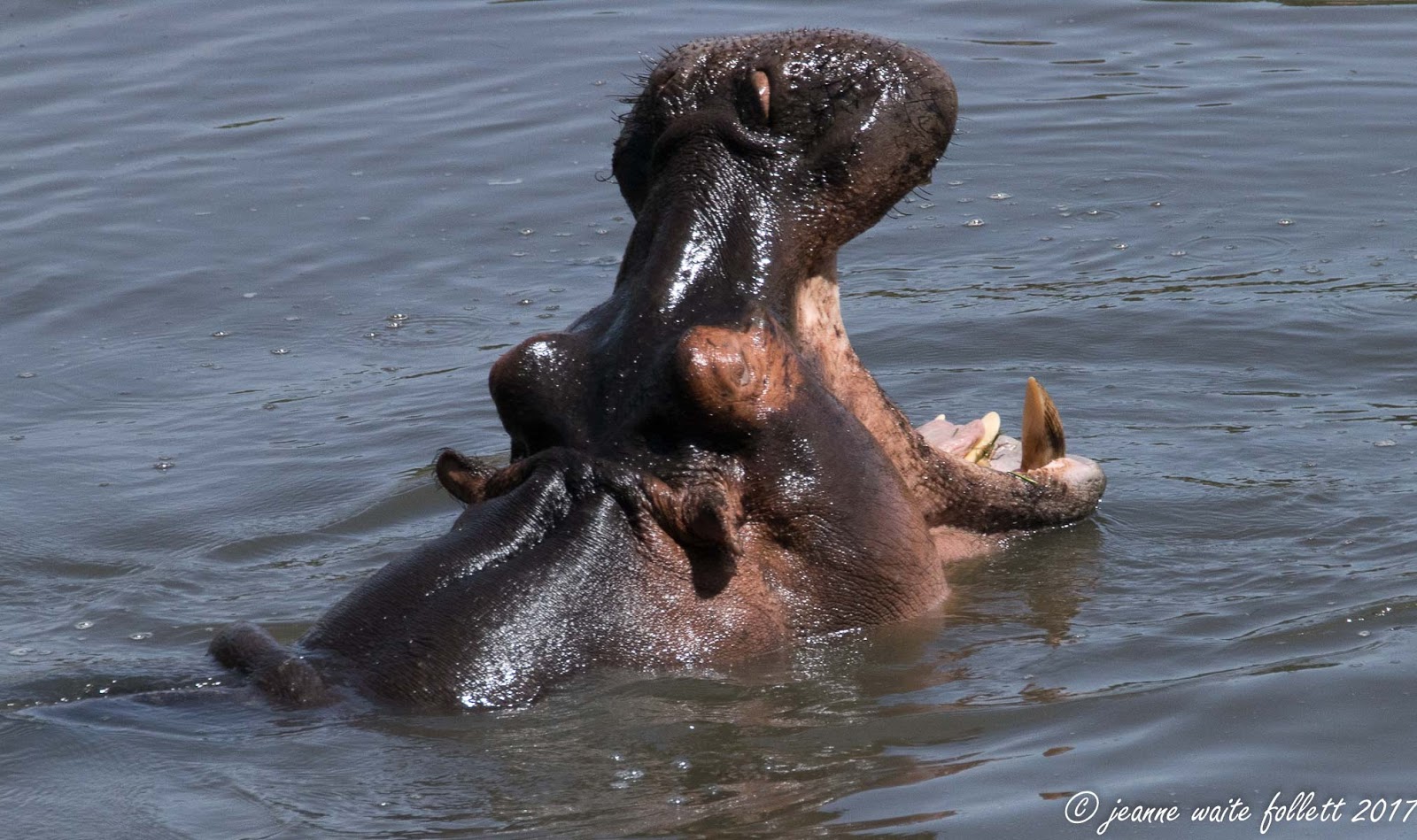 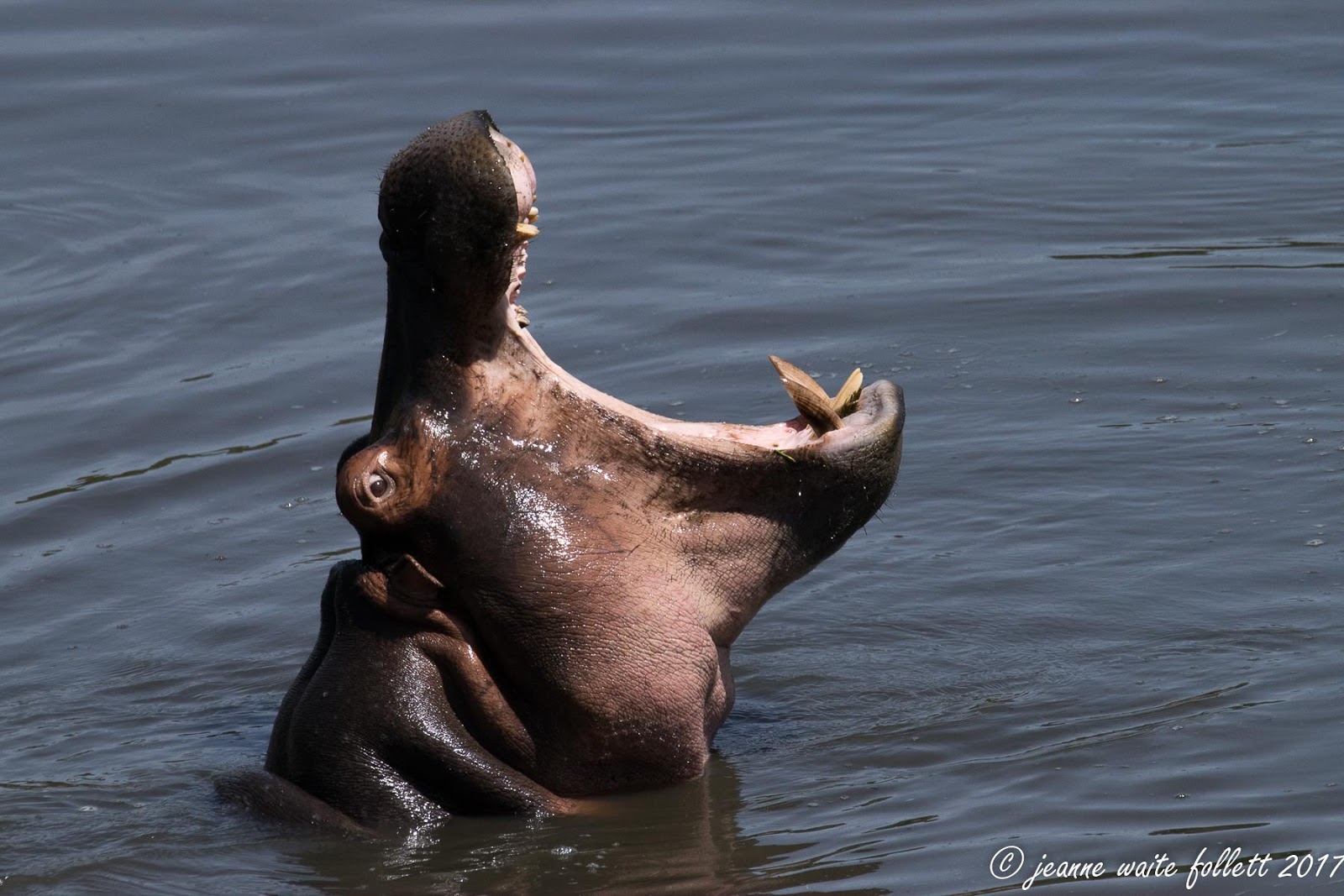 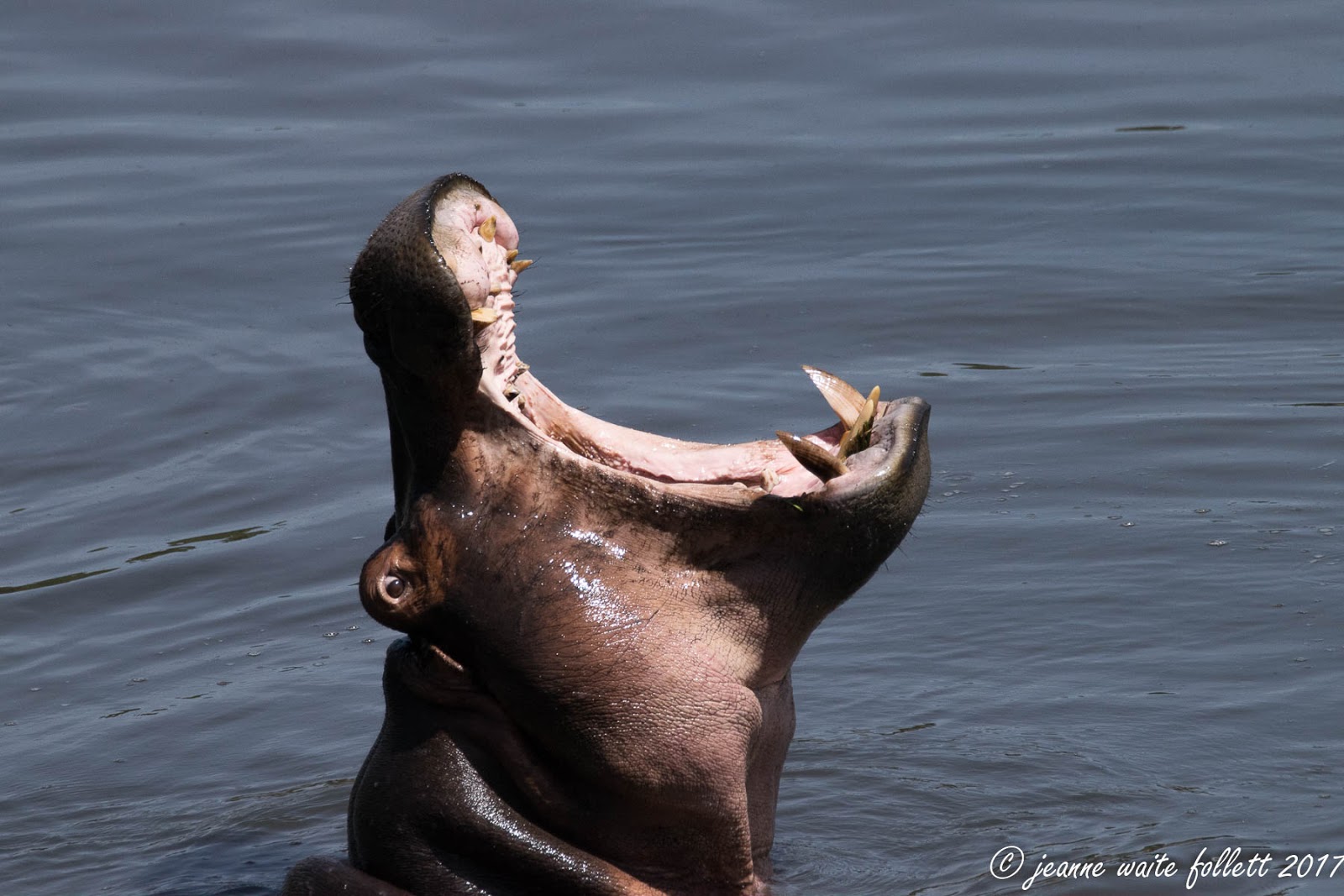 Standing in a safe place high above a hippo pool, I listen to a cacophony of grunts, bellows, snorts, wheezes, and some other disgusting noises emanating from the hippos.

While young bachelors are allowed to remain with the herd as long as they show deference, the reigning bull shows his dominance by defecating on his inferiors.   Considering that an adult hippo will eat 75 to 150 lbs. of grass in a night, that’s a lot of bull s--t. 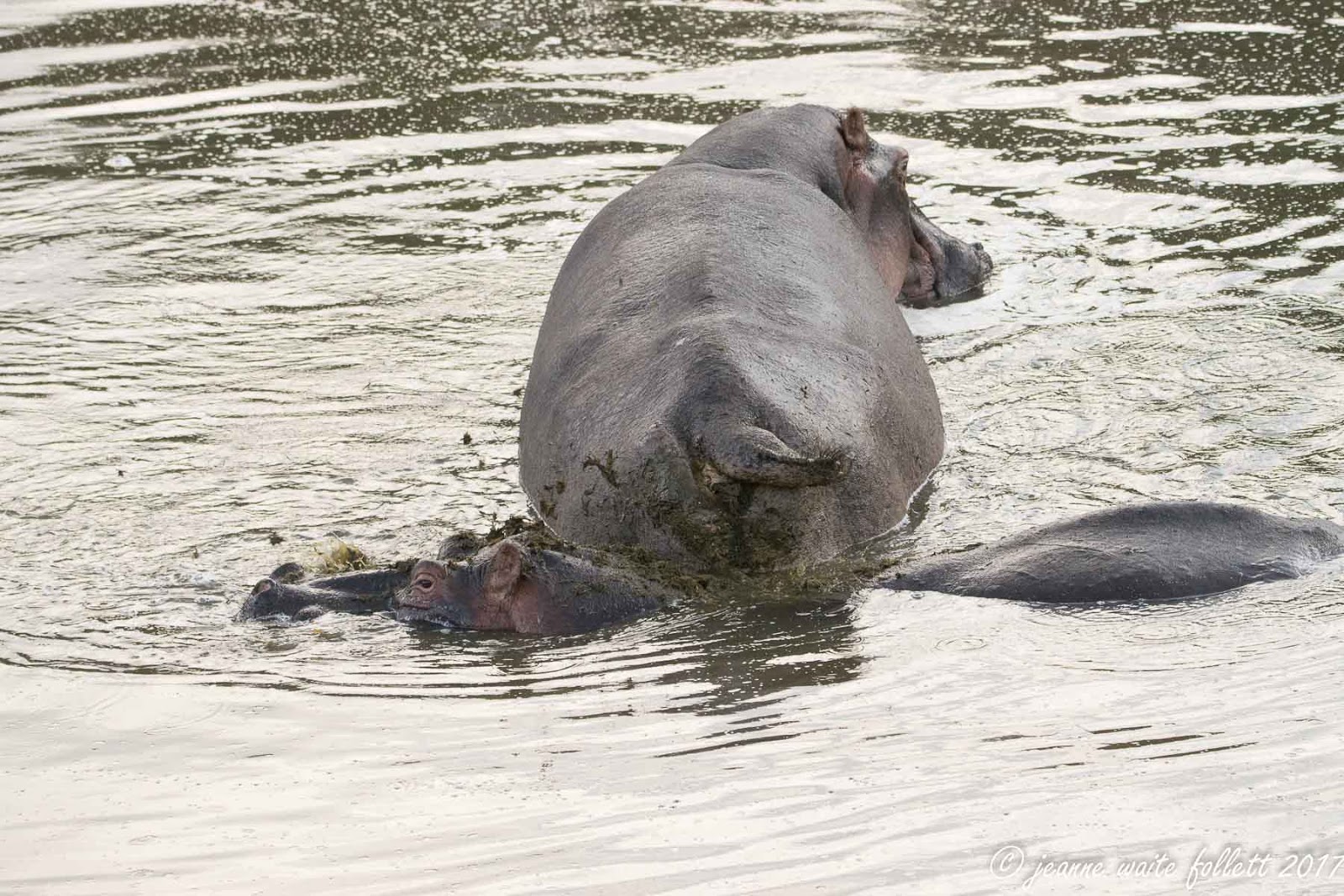