Breakfast at Tiff... I mean, Pablo's

I gave Pablo the Parrot breakfast in bed this morning, and with that simple gesture, a whole bunch of random thoughts coalesced into an extravaganza of synapses, and I began thinking about growing old.

Thoughts of aging had been wafting around in my head for a couple weeks, since a recent birthday. Much like eye floaters, those thoughts came and went, wandered around, and got in the way of more important thinking processes. But this morning, they all came together and I finally figured out where they had been heading all along.

I like it when that happens. It plays right into this little OCD thing I have about putting things in order—all the can labels facing front, clothes all hanging the same direction, shoes lined up. Everything in order except my desk and its environs. That part is completely unaffected by OCD, and in fact the disarray might be a subconscious negative reaction to everything else.

Anyway, as I said, I fed Pablo breakfast in bed this morning. His bed, not mine. His bed is the upper perch in his cage. That’s where he sleeps and hangs out most of the time. He’s been having some trouble with falling out of bed the last couple years. The main problem is that he sits flat-footed, rather than curling his toes around the perch, so I plastic-tied an inch-and-a-half wide board to the perch, with a towel wrapped around it and sandwiched in between the layers to hold it. The flat perch and the towel for traction have helped immensely.

Today I cooked my morning egg and put a piece of it in his treat cup, which is next to the lower perch. A minute later I heard a sweet, soft voice say, “Hel-lo-oo.” I took some more egg over to the perch and sure enough, the first bit of egg was in the treat cup and Pablo was still “in bed” on the top perch. So, I set the second egg on the wide perch and he immediately began eating. 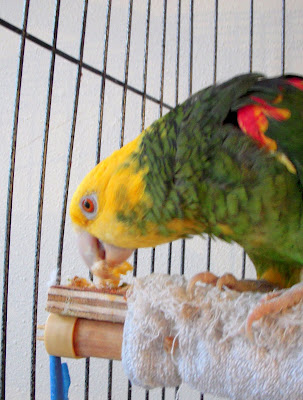 Then I started thinking about the whole situation, how a little stubby green parrot with a vile reputation has managed to manipulate me into giving him more food because he was too lazy to climb down and eat the first bit. I don’t know how it happened, but after twenty-four years with him, it’s far too ingrained to change now.

I started laughing, thinking about any of my heirs feeding this noisy creature. I was talking recently with someone whose neighbor has a Green Amazon parrot that’s at least a hundred years old. Whoa. That rocked me. I’d heard they live anywhere from fifty to eighty, but never had I heard a hundred. Pablo’s only thirty-eight. He has a long way to go. Maybe my grandkids’ kids will be manipulated by Pablo.

And that brings me to my birthday, which was my sixty-eighth. I had mentioned to friends that I was really looking forward to seventy, because that’s a number that seemed utterly unattainable when I was young. Sixty-five, I thought, now that’s something else. If I make it to sixty-five, that’ll be a miracle. And, after looking at the people who were then about that age, I wasn’t so sure I wanted to get any older than that.

Funny how your perspective changes. Shoot, I was just getting started when I reached sixty-five. I can’t quit now.

My friend Hermann wrote that it just gets sooooo much better after seventy. I can believe that, and I think I finally figured out the reasons why.

First, when you reach seventy, you’re old, and nobody expects you to accomplish anything. So, anything you do accomplish is gravy and people think you’re awesome. Especially kids (who NEVER want to live to be as old as you are).

Second, when you reach seventy, you’ve finally got it all figured out. Or, if not, what the heck? You'll probably forget what "it" was anyway.

Third, when you reach seventy and you never dreamed you’d live that long, these are the bonus years, the extra years, the golden years--the stolen years.

And, like stolen kisses, they are much sweeter by far.