I said "adios" to the baristas at Starbucks who every morning fixed my grande iced passion tea. They asked me to come back some time. I said "hasta la vista" to the senor at the Arco super-mercado from whom I'd buy a Coke Zero and tamales (if he had any) every day. Outside the mercado, the senor who every day asked me, "(pretend there's an upside-down question mark here) Como esta?," and who grilled the carne asada, asked me again. "Muy bien," I answered and told him I was going home to Alaska.

Two hundred and fifty pesos (about $25 bucks) later, the taxi driver dropped me off at the Mazatlan airport, unloaded my luggage and wished me well. A couple hours later we were wingin' it north.

By the time I got my camera out of the bag stashed under the seat in front of me, my Alaska Airlines Boeing 737 was a few thousand feet above Mazatlan. By the time I recognized the part of the city that was below me, we'd already passed the El Cid complex where I stayed for three weeks. 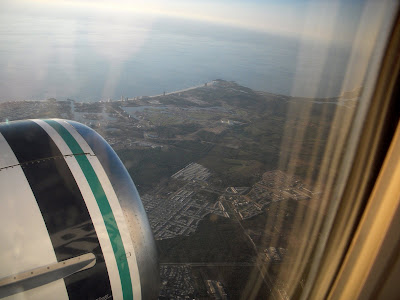 However, I did manage to take this photo before we passed that, too. See that point out there? That's where we had dinner the last night I was in Mazatlan. A short distance to the left is where we'd watched the sun set a bit earlier.

And, as we screamed toward the U.S. at hundreds of miles an hour, I watched this sunset from my window seat.

I'll spare you the twenty-eight pix of it I took, and just show you two. 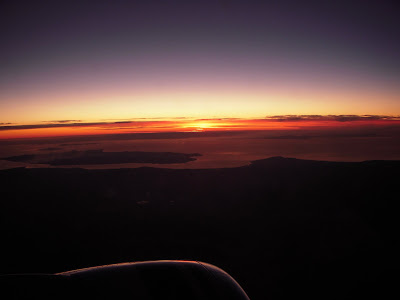 In this photo, we are over mainland Mexico with the Sea of Cortez beyond, and the Baja Peninsula in the distance.

When we landed in Los Angeles, the flight attendant announced we were landing in a remote location and would be transported by bus to the international terminal where we would have to clear customs and immigration. We landed and we taxied and we taxied and we taxied. We taxied so long and so far, I was sure we were on I-5 and I could have jumped off and walked to the San Francisco airport for a connecting flight. When they finally let us off the airplane--this involved a lo-o-o-o-ong wait while a blind man manuvered the jetway to the plane's door--the waiting bus took us back to LAX.

I over-nighted in Los Angeles, thanks to Alaska Air changing their flight schedule after I'd made my reservations, and the next morning flew into Seattle for a connecting flight. On the tarmac in Seattle, I spotted yet another paint job on an Alaska Air jet. Speed skater Apolo Ohno is painted on still another jet, according to the in-flight magazine article I read. 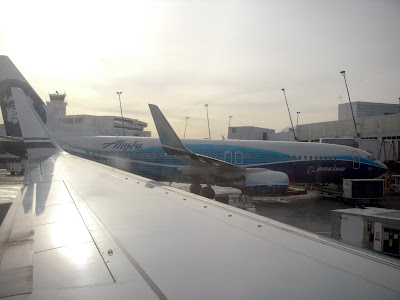 Clouds covered the earth below during the three and a half hour flight to Anchorage, but just as we cleared the mountains east of Anchorage, a mid-afternoon sun burst through to welcome me home. The land in the foreground is across Cook Inlet from the city. The ribbon of water below that is the Knik arm of Cook Inlet. The other ribbon, stretching back into the upper left is the Turnagain arm of the Inlet. The highway that is carved out of the mountains along that arm is where I will drive on my way home, almost a hundred miles away. 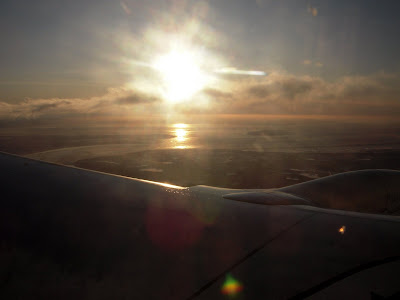 Here's part of the city, bathed in the mauve light of a winter sunset.

My friend Patti picked me up at the airport, and we crossed town to her condo so she could get her car and return to work. As I left her place, the sun was setting in earnest. We are losing more than three minutes of daylight as we speed towards the shortest days of the year, just before Christmas. 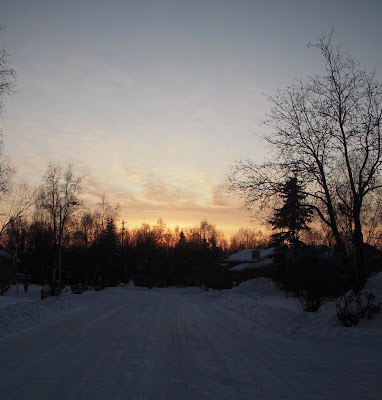 While that sun looks all gold and gray to the west, this is what it does to the mountains on the east. 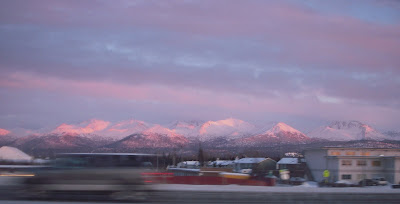 The whole show made driving incredibly difficult. One of these days, I'm going to get in an awful lot of trouble taking pictures while driving. What's the acronym for that? TPWD? or PWD for Photographing while Driving? 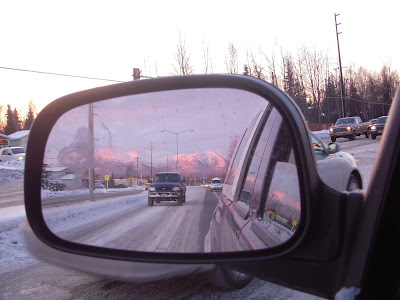 Anyway, I'll tell you about reaching home another day. In the meantime, I want to tell you what I learned on the three legs of my flight home:

1. There are four security screenings to leave Mazatlan. The first is a hand inspection of your check-in baggage just before the ticket counter. The ticket counter is where you turn in the second half of your visa form, and you better not have lost it, or you can't leave Mexico.

The second is the lady who stands outside the security posts, and she checks to see that you are who your say you are and the name on your boarding pass matches the name on your passport, and you look (God forbid) like the picture in your passport or on your driver's license. She also checks to make sure you're heading to the right concourse. Then, she passes you to stand in line to go through security. Normal security here, except you get to keep your shoes on, I think. Seriously, all these checkpoints start melding together into one big police state, after a while. If you pass this security, they let you take the elevator upstairs to the departure concourses. 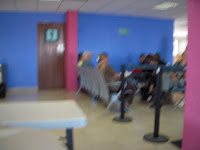 Then, if you make it past the gift shops, duty-free shops, and food court, there's another security checkpoint for your carry-on bags and person. Last, after waiting in the so-blue-it's-almost-purple and knock-your-socks-off pink, very utilitarian-with-no-frills gate section, they security people arrive for a last minute hand check of your carry-on bags again. If you're a people-watcher, like I am, these gate areas can be quite entertaining. Anyway, they finally let you get on the airplane. (I blurred that photo intentionally, so you can't recognize anyone. Really. And the blue is much darker and the pink much brighter.)

2. Toothpaste in your carry-on is a no-no. Now, toothpaste is not a liquid, a gel, or an aerosol, the Three Evil No-Nos. Toothpaste--my toothpaste, at least--is a paste. While it does have extra-whitening ingredients, it does not explode. I think. I think it doesn't explode. Nonethless, LA security took it away from me. Never mind that it had been with me in my carry-on since leaving Alaska. Toothpaste has joined the Three Evil No-Nos as a banned substance.

3. My new Kindle is considered an electronic device that has to be turned off during take-off and landing. This was not good news. Take-offs and landings are when I prefer to bury my brain in a book so I can pretend we aren't taking-off or landing. "Out of sight, out of mind," as the saying goes. I asked why, explaining that the wireless feature was turned off so it couldn't send or receive. "Because we want your full attention during take off and landing," she said. Wait a minute, I thought. They strap themselves into their little flight seats for those times. They aren't prancing up and down the aisle entertaining us.

4. After each successful controlled crash...I mean, landing...I had to restrain myself from saying, "Thanks, Sully," to the pilot as I was de-planing.

(PS: Didn't get the song? It's a hymn named "Going Home," set to music from the "new World Symphony" by Dvorak. The original movie? "Snake Pit," about what used to be called insane asylums. You think not? Come listen to Pablo the Parrot tell me what he thinks about me being gone almost a month.)
Posted by Gullible at 1:35 PM