Father Time is My Peer 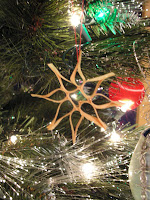 My past caught up with my future today. Like the ghosts of Christmas Past and Future in Dickens’ “Christmas Carol,” shades of the future yanked my head around, looked me square in the eyes, and got my attention. All around me were devices that portended an ominous future, devices that threatened to one day become necessities.

Walkers, wheelchairs, oxygen bottles, and dialysis equipment whispered nasty little threats. Extra-wide doors mocked my energetic steps down the hallway. “Someday,” they seemed to say, “Some day you’ll pass though here.” I ignored their innuendos, shook my head at the wheelchair that intimated it had my name on it.

I strolled down the corridor of the Anchorage Pioneer’s Home, losing myself in the black and white enlarged photographs of Anchorage in the 1940s, 50s, and 60s. My time, the time of my youth when I lived in this frontier city. A picture of , the main drag, with Hewitt’s Drug Store, the Hofbrau, Koslosky’s Men’s Store, and the dozens of little shops and bars beyond. To a friend with me, I spoke of Saturday afternoons and chocolate sodas with a friend at Hewitt’s. To others I told of an eerie walk through Koslosky’s after the great 1964 earthquake ravaged this block.

My body was in the corridor of this senior retirement home, but the rest of me was in 1960. That was the year I graduated from . With me in the hallway were several members of that graduating class. We were there to visit with yet another classmate, Freddie, who had recently moved into the Pioneer’s Home after a stroke left her confined to a wheelchair. This visit was Judy’s idea. Judy is the one who has organized our class reunions every five years, who keeps track of us and our phone numbers and e-mail addresses.

Judy brought Christmas to Freddie today. Along with four of us other classmates, she had homemade fudge, a lovely pastel hummingbird and iris figurine, and a jovial Santa who rocked his rocking chair at break-neck speed. We followed Freddie in her wheelchair to the fifth floor dining hall where the noon meal was about to be served and gathered chairs to sit with her at her assigned table.

A gentleman seated next to her introduced himself as Meryl, and with a shy, abashed smile said, “We’re engaged.” He told of meeting Freddie a year ago when they both were in a local hospital. At the time he lived in Haines, many road miles away from .

“Every time I went back to Haines, they’d have to medivac me back to , so I figured I may as well move here,” he said. He cut up Freddie’s piece of luncheon chicken, helped her readjust her position in her wheelchair, and teasingly pulled her gently back and forth. He said the wedding date was up to Freddie. She blushed as she smiled, and began to laugh deep, happy laughs, laughs that didn’t want to end. 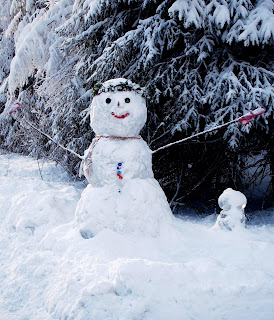 Suddenly a long line of schoolchildren, all dressed up in black and white, entered stage left and lined up in rows according to height in front of the piano. Their director, in a tux with tails, introduced them as the Williwaw chorus from Williwaw school.

Snowman by Ruby, Sadie, and Neil

As they sang several holiday songs for the elders, I looked at the aged faces of the residents of the home, and thought I could see young minds savoring priceless memories.

My eyes were drawn to the view across Cook Inlet, to a snow-mantled , the Sleeping Lady, who waits in legend for her warrior lover to return. Across the gray silty water, the mountain profile suggests a woman supine, long tresses stretched out as she sleeps.

Below, along the sidewalks and in yards, spruce and birch trees were garbed in hoarfrost, while patches of gray ice fog hovered nearby. An image from 1965, as clear as if it were before my eyes that instant, came to mind. I’d lived near here and took this street to work every morning. The temperatures had been cold for many days and hoarfrost was thick on everything. As I drove, the sun was attempting to rise above the to the east. The early light turned the clouds of ice fog to pink and gold against an impossibly blue sky. I was late for work that morning, resented having to go in at all. I wanted to stand in the fierce cold and watch the sun come up, watch the colors transition.

The subject of the Pioneer’s of came up, whether or not we were members. To be eligible, one has to have lived in for at least thirty years. We all were long past that, but several of us said we refused to apply until they allowed women to join the Pioneer’s instead of the auxiliary. The membership rules had changed not long ago, and we all planned to join now. I thought about that for a while, and wondered if it weren’t that spark of independence and defiance and self-sufficiency, traits gleaned from our common experience of having been raised in this harsh, demanding land, that bonded us today.

We left the home and gathered in a coffee shop a few miles away. Seated there, surrounded by patrons working on laptops, huge bags of coffee beans, oak tables, and blackboard menus listing coffee drinks never imagined five decades ago, we spoke of how much our city had changed. We talked of the Oyster Loaf and Westward Hotel coffee shops, the latest news of classmates who have moved away, of iconic buildings in this town that are in danger of demolition. We laughed about long-ago crushes on sweet high school boys. We wondered if classes from other schools were as bonded as we were.

We joked about reserving a wing of the Pioneer’s Home for our whole class, and turning it into the I Street Party House. I spoke of a TIA--a mini stroke--that I had last year. When asked how it affected me, I responded, “It gave me my first hint that I might not be bulletproof.”

She laughed and said, “You might be bulletproof, but you aren’t stroke-proof.”

Beneath it all, all the laughter and stories and uproarious confessions amid the comforting aroma of coffee on a cold winter day, were the images of wheelchairs and walkers. The day had humbled us. I felt honored to have been asked to participate. We are all newbies in the Age of Medicare now.

Some of our classmates are gone, felled by accident or disease. Those of us who gathered today are healthy and energetic, our medical needs mere inconveniences in the grand scheme of things. We are the fortunate today but we are not unaware of what might lie ahead. We make decisions based more on today and tomorrow rather than next year and the next. Our long range planning isn’t so long range anymore. We are well aware that father time is now a peer.

I am whittling down my possessions, remembering how my mother had done the same, leaving little work for her children after she passed away. I am thinning and reorganizing my files, recalling how her paperwork was all in order. I clean out closets and drawers and storage spaces, setting aside those things I know I’ll never use again.

I kept the snorkel gear, bicycle, kayak, cross country skis, hiking boots, and camping equipment. I hung the day-glo-orange safety vest on a hook in the garage, near the new case of yellow litter bags. Come spring I’ll know right where they are and can start cleaning up highway litter again.

On the wall above my computer is a plaque sent to me last year by dear friends. It’s right where I can see it every day. It reads: “Life should NOT be a journey to the grave with the intention of arriving in an attractive and well-preserved body, but rather to skid in sideways, chocolate in one hand, wine in the other, body thoroughly used up, totally worn out, and screaming ‘WOOOO-HOOOO! What a ride!’”

As I left the Pioneer Home today, I saw two wheelchairs flanking the elevator shaft.

“Buzz off, you guys,” I said to the wheeled contraptions. “If I need a wheelchair one day, you’d better have a seat belt and roll bar on it.” 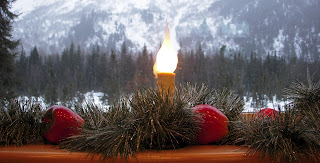