Storms spawned in the are among the most malicious on earth. They whip themselves into frenzies, gulp moisture from the ocean, then head west to see what mischief they can create. Born of a semi-permanent low pressure area called the Aleutian low, these storms toss huge fishing boats about, throw spray and huge waves across them, and coat them with deadly ice that must be chopped away with axes before the vessels roll and sink.

The archipelago of islands called the Aleutian Chain that cups the Bering Sea in its arc is both the western-most and eastern-most land in the . The farthest islands would be in tomorrow were it not for a jog in the International Date Line.

The islands spread towards , and within that arc the storms become tempests and gales. If there were such a thing as hurricanes that far north, then these winds certainly qualify, but assigning human names to the almost constant winter storms would be a monumental task. The active volcanoes of the Chain steam and erupt, as far beneath the islands the Pacific and North American tectonic plates wage war for supremacy.

Some say there is a devil-clone of the Bermuda Triangle in the Bering, a place where boats simply disappear with no calls of distress, taking their entire crews with them. It is the world’s most dangerous job, being a fisherman in the , and only the bravest or most foolish go after the rich stocks of fish and crab.

lies near the most southern portion of that arc, the Bering Sea to its north, the on its southern flank. Most of the island is low-lying rolling tundra. Only at the extreme northeastern end are there mountains that block the hellacious winds. At the southern end, there is nothing to stop the winds and they wreak havoc with the pitiful structures of mankind.

Hiding from those storms in the structures remaining on the island is a terrifying, life-threatening ordeal. How do I know?

I’ve been there and lived through two of them.


During the first, in October of 1987, I was working night shift in a WWII-era hanger, where heavy equipment was repaired. Though engineers had inspected the hanger, and required metal brackets installed for reinforcement, the rule was that we had to abandon the building once winds reaching a sustained 63mph. So, instead of riding out the storm in a building that had been standing for almost half a century, and hiding under a welder’s table with a three-inch thick steel plate for a top, we were required to return to the ATCO units that served as our camp. 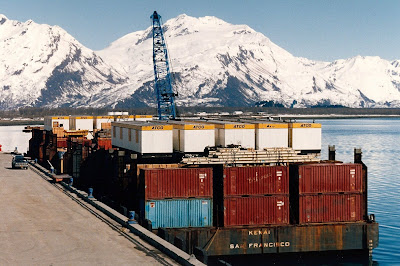 One of our 100 x foot-foot supply barges in Valdez. ATCO camp units are loaded on the top layer. Each sleeper unit had four small bedrooms, approximately 10 x 10 each.

ATCO units are like trailer houses. Thin-walled, thin-roofed, able to withstand frequent transport to varying locations by barge or truck, but vulnerable to wind and heavy snow load. Our camp consisted of two rows of ATCO sleeping units facing each other, with a narrow plywood hallway and roof joining the two rows.

Wire rope ( braided steel cable) was stretched over the units, and were anchored into the ground on each side. When ferocious storms were forecast, the largest heavy equipment available was brought into camp and parked on the windward side for safety.

During that first storm I was in the aircraft control tower at camp, watching the anemometer needle jerk higher and higher. Many, many gusts above 63 mph were measured before the needle stuck above that mark for more than a minute. Then I returned to the hanger shop and delivered the news that we had to go back to camp. 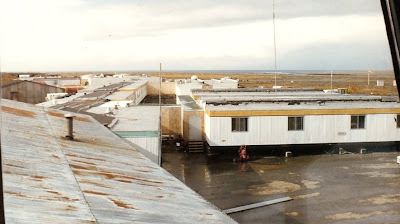 While my day shift roommate slept with the help of ear plus and eye shades, I leaned against the wall of our room and tried to read. The wind, which came directly at our room, battered the wall constantly, and as the storm gained in strength, I found it impossible to focus on the printed page because of the shaking. Finally, I turned off the light and lay in the darkness, imagining the window next to my bed imploding.
The next morning the hanger stood, another storm survived.

The second storm came during the winter. My husband and I had been invited to dinner, along with a few others, at the US Fish and Wildlife officer’s cabin, located on a pond just over a small hill from camp and the hanger. The drive took less than three minutes. It was snowing when we left camp. By the time we reached the cabin, there was no question about being able to return, and when another truck load of guests arrived, we had to go out to the road and guide them in. We all spent the night at the cabin. We were able to reach the project manager by radio, and let him know where we were, how many of us, and our names. 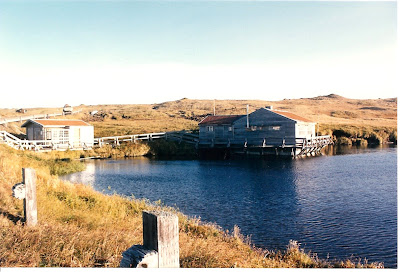 The US Fish and Wildlife protection officer's cabin, where we took refuge from a winter blizzard. Obviously, this picture wasn't taken during that storm.

The next morning, a rubber-tracked vehicle rescued us and returned us to camp. Then the digging out began.

Here are some photos taken the next day. 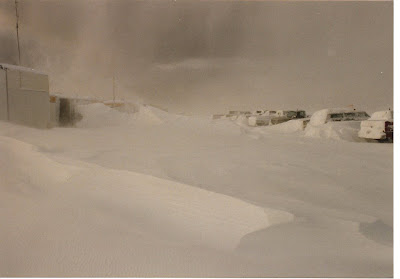 A row of parked vehicles next to camp. 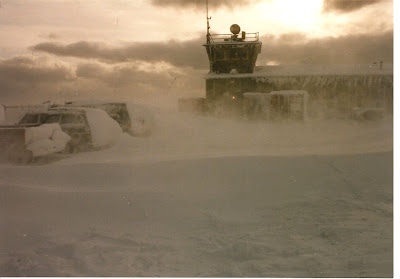 The control tower and rec room, the day after the blizzard. 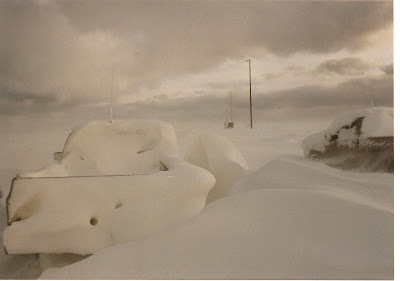 Snowed-in vehicles. Mine was the black and brown one at the right. 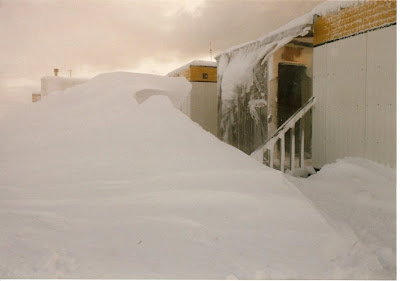 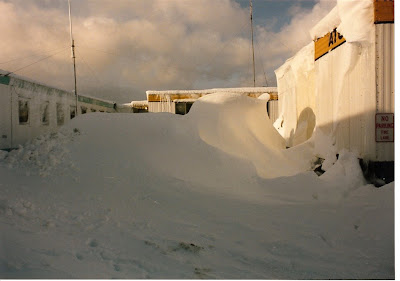 A snow drift between the offices and other units. 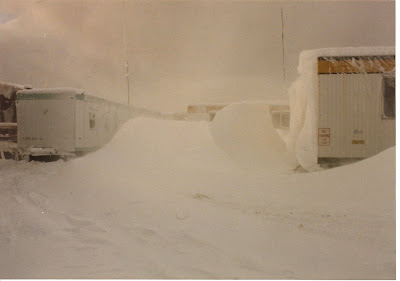 Same view, earlier in the day. 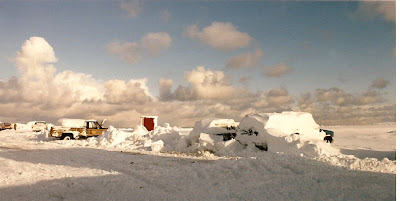 Digging out the vehicles. A window was open a sliver during the blizzard, and the cab was half full of snow. 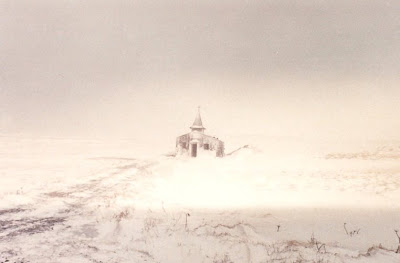 The WWII-era chapel during another, more gentle snowfall.
This concludes my five-part series of Aftershocks.
Posted by Gullible at 12:13 AM