In with the new, out with the old?

It was the perfect Christmas gift for my new home, a patchwork leather firewood carrier, accompanied by fireplace tools.

The gift was from my parents in 1977. Since then, I couldn’t begin to estimate the number of cords of firewood it has helped me carry from wood pile to fireplace, or in later years, wood pile to wood stove. It did its duty, and added a serendipitous beauty. 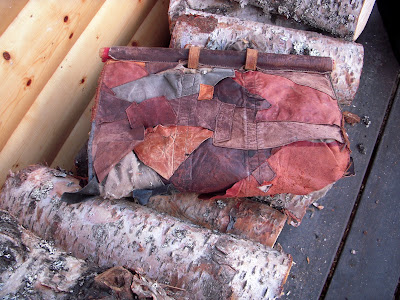 Today, it shows its years. Most of the leather patches are missing or hang loosely from the carrier. Only the handles and dowels to which they are attached remain strong and ready to go another thirty-three years. I’m not sure of the fabric that lines the carrier, but it doesn’t ignite when a frisky spark vaults from the firebox and lands on it, so I’m guessing it’s wool. Wool. Seems a fragile material for holding the whole carrier together as the leather patchwork has long been separated from side to side. 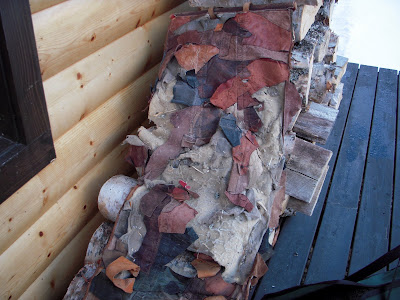 This afternoon the UPS driver dropped off a slender cardboard parcel, and the long-awaited new canvas firewood carrier put the old one out to pasture. It’s a plain Jane type of carrier, more interested in being utilitarian than decorative. It tries to make up for it by having end panels, and it is for that specific reason I selected it from the catalog. 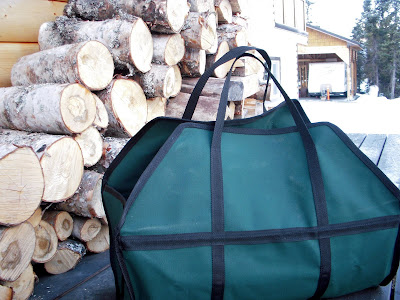 The prospect of no more bark chips scattered throughout the house as I haul split firewood into the living room was the main selling point. Secondary to that was its promise that it would always stand ready, willing, and open as I filled it. The leather one couldn’t, which is what led to its eventual demise. To fill it, I had to drape it on something, and too often that “something” was the pile of split wood—scratchy, rough, snagging wood. 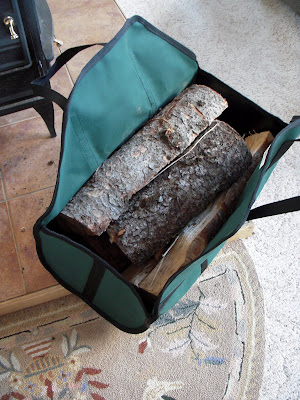 Now, the new carrier snuggles next to the woodstove, standing open as promised. And the old one? How do you pitch a faithful servant in the trash? 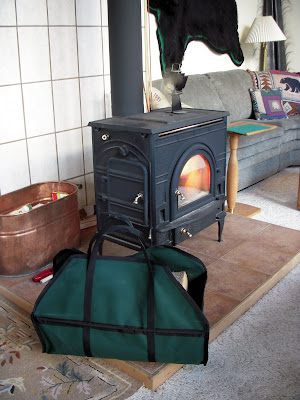 For now the old carrier rests atop the split birch on the front deck, the prized firewood in these parts because of its high BTU output and long burn time. Birch is the wood that goes in the stove last thing at night, and it usually holds a slow burn all night. Keeping company with the birch on the front deck, where the squirrels and chickadees and nuthatches pay frequent visits to the bird feeder?

I’d call that a place of honor. 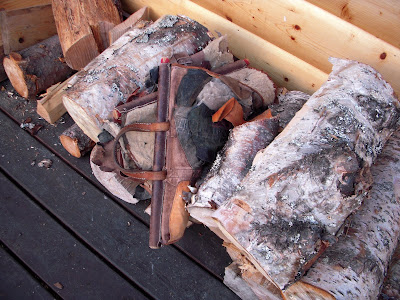