As the world turns...

From mid-November until mid-February this valley where I live sees no direct sunshine. None. We live in shade for three months. Odd? To you, I guess, but I've lived here for thirty-three years, and well, I reckon that's how it's supposed to be.

The sun reflects off the snow-covered slopes of the mountains, so it's bright daylight, just not direct sunlight. In the two photos below, you can see how narrow the valley is, with a major highway--the Seward Highway--bisecting its center. The valley lies roughly east-west, but at each end are other mountains.

With the earth tipped as far away from the sun as it can get during the middle of winter, the mountains block the sunlight that also are too high for the sun to see over.

Now, we are waiting for mid-February, watching the sun line creeping down the south-facing mountains, waiting for those precious few seconds of direct sunlight. Official daylight--that time between sunrise and sunset--is lengthening by more than five minutes each day as the earth tilts back towards the sun, bringing summer to the northern hemisphere. 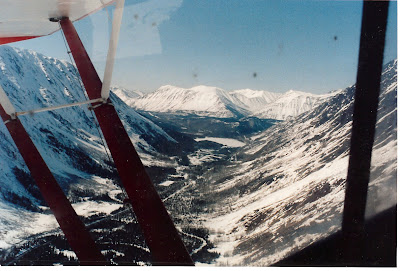 This photo probably was taken in mid to late March, as sunlight illuminates the entire valley. That big white patch at the upper center is Tern Lake. We are looking east to west. 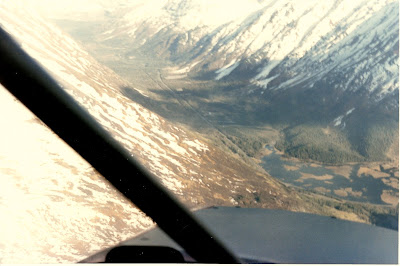 Looking at our valley from the west. This probably was late April, and that shade is from clouds. Tern Lake lies of the end of the airplane's wing, dotted with small islands. 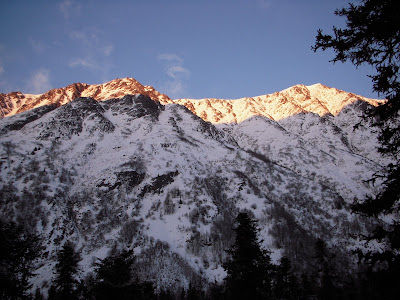 A week ago, this is as far down the mountain as the sun was able to reach. 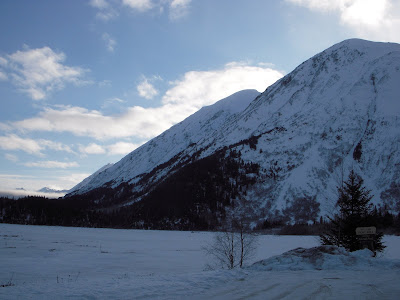 These are the mountains that block the sun with their near 4000 foot height. 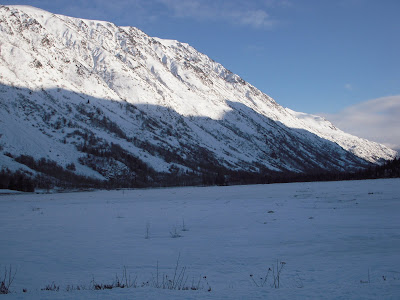 Today, at what is high noon to us (1 p.m. because we jumped up a time zone from our geographically correct one a few decades ago), the sun has made great advances. Now the watch is on. I don't know how people in other parts of the country watch the inevitable advancement of spring, but this is how I do.

In another ten days a sliver of sunlight will shoot into my kitchen window and reflect off the breakfast bar counter top. Each day, I'll watch as it advances across the tundra behind me. Each day, a few more moments of sun.

And then finally, full sunshine from early, early in the morning until almost midnight when it slips behind a mountain to the north. At the solstice period in late June, the sun will come in my north windows early in the morning and again before it hides behind that ridge. However, it won't get dark at night, at least not until late August, which really, really makes up for three months of bright shade. 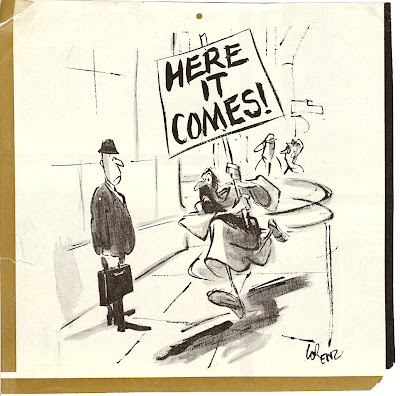