“An idle brain is the devil’s workshop,” wrote H. G. Bohn in 1855. Sometimes he’s misquoted as having written, “An idle mind is the devil’s playground.” Either way you prefer the clichéd proverb, boy, did he ever get it right.


I received an e-mail this morning from the cheerleader of a writer’s group I belong to, in which she noted that the new snow should make for ideal ambiance for writers.

So, Seward got snow, too, I thought, looking on the white landscape here in Halibut Cove. 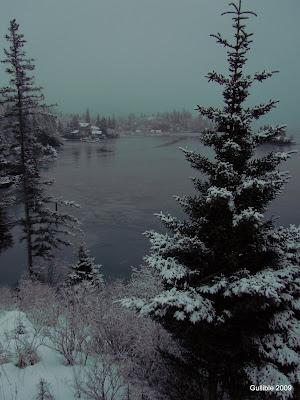 The weather has yet to take that irreversible step into spring, though the daytime temperatures are always above freezing and the nighttime mercury seems headed for the same region.

Just before darkness settled in yesterday, snowflakes as large as quarters began falling on Halibut Cove. This was wet spring snow, the kind that’s full of moisture, piles up quickly, and packs as hard as concrete. When I went to bed, the quarters had morphed into half dollars, so I wasn’t surprised to see four inches of new snow on the deck this morning. 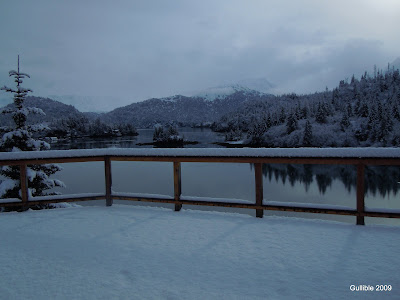 Gerri was more than ticked off. She tried door after door (and there are many in this home), searching for the door that opened onto better conditions, as in a snowless terrain for mousing. 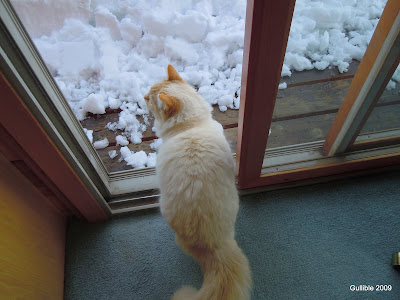 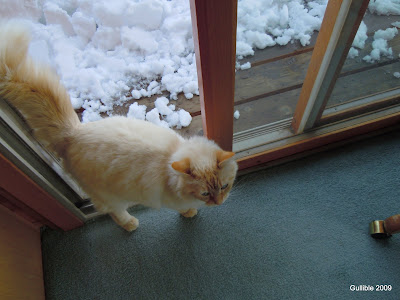 Then she looked at me with an expression that left no doubt: “You don’t fool me. I KNOW you can make it go away.” 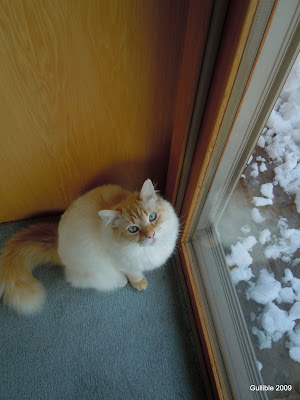 When the sun came out from behind silver clouds, I tried to make the snow disappear for Gerri, if only on the front deck. I grabbed the push shovel and started in. The snow was heavy and wet, and compacted so hard I could only do a small stretch at a time and had to attack it at angles. I kept thinking about that ambiance comment as I worked. Halfway through pushing the snow off the deck, I realized that this was SO wrong. 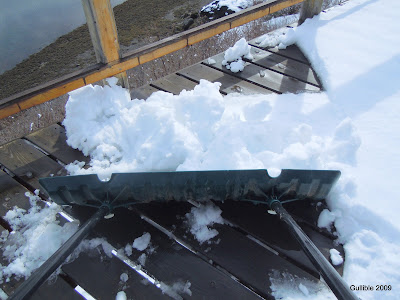 I abandoned the shovel, and a short time later had much of the snow from the remaining half of the deck almost gone. 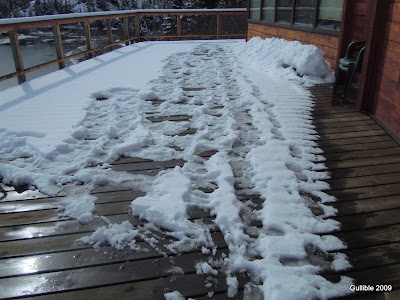 This is where I put it. 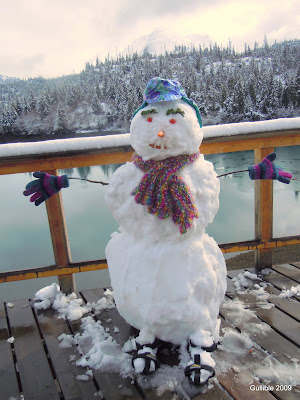 To complete his ensemble, and to identify him as a real Halibut Cove resident, he wore the obligatory footwear of the Cove. 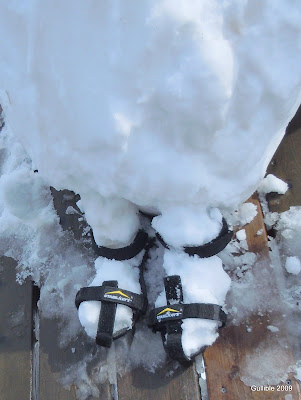 These are ice grippers, fastened to the footwear of your choice by adjustable Velcro straps. 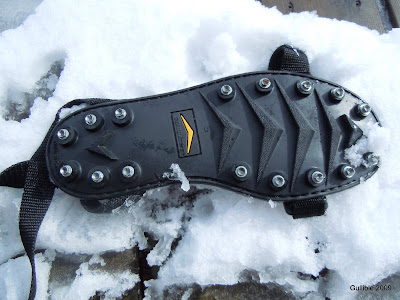 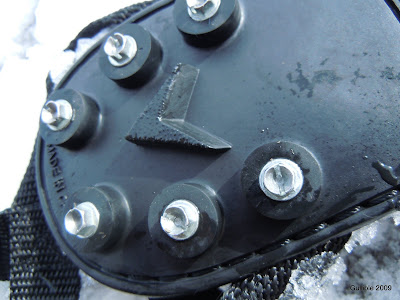 It occurred to me that I had him facing in the wrong direction, so with a bit of snowman yoga, he soon looked out on the scenery. 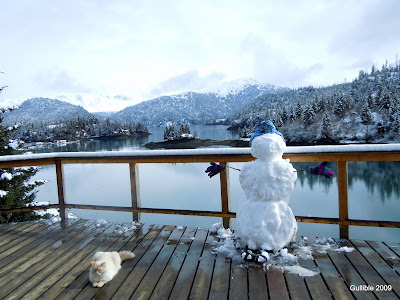 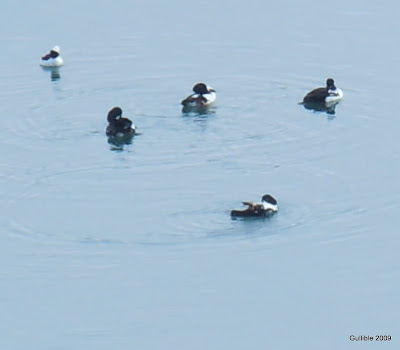 Gerri, who had thus far been quite blasé about a new resident on her deck, made a closer inspection after I went inside. 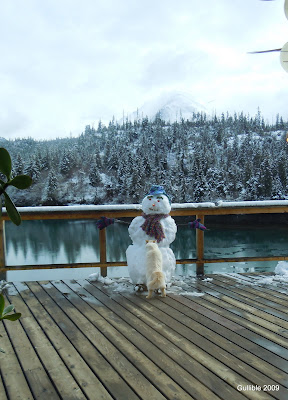 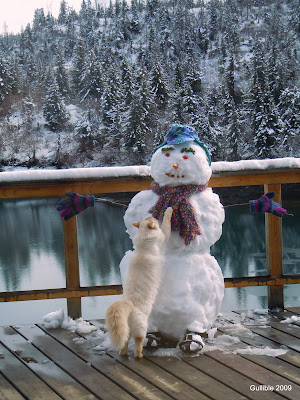 Not close enough, she decided. 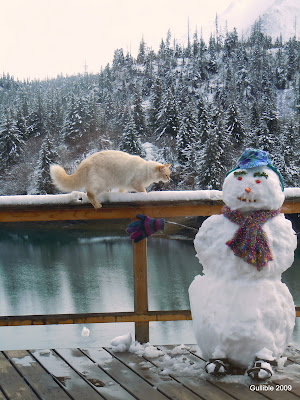 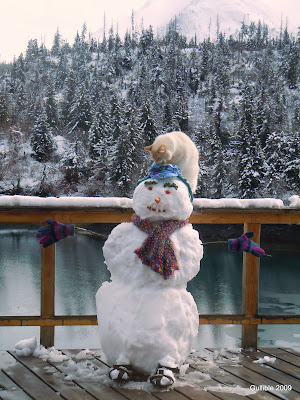 She tried rubbing her face on the snowman’s nose. 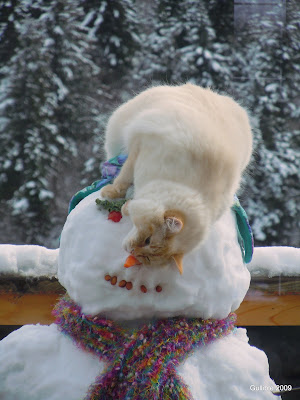 It wouldn’t hold still, SO…. 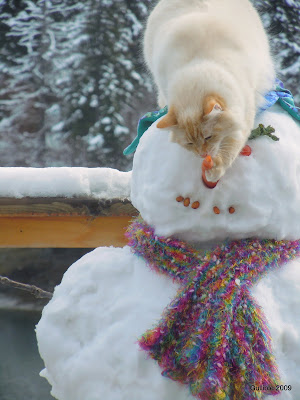 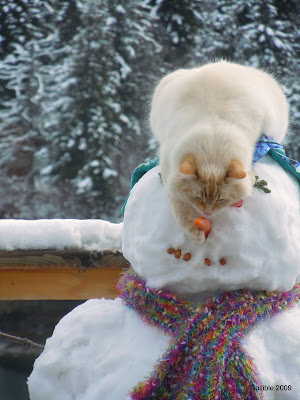 The snowman was a bit worn out after Gerri’s visit. 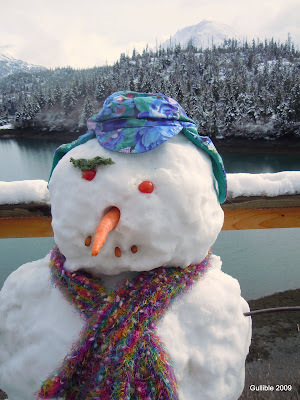 I’ll leave it up to you as to which one of us had the idle brain today.
Snow: the ambiance you have to shovel. Or not.
Posted by Gullible at 4:11 PM