You know how when you go to the doctor and he has you sit on that crinkly paper at the end of the examining table and he takes that little mallet with the orange rubber triangular-shaped tip and hits the soft spot on your knee and your foot jumps out in front of you like you’re dancing the cancan onstage at Diamond Tooth Gerties’ Saloon in Dawson City, Yukon Territory?

And then he does the other knee and you notice he’s careful to stand beside you rather than in front of you and you wonder how many times he got kicked in the whatsis before he learned that little manuever? And then you sit there feeling like you don’t really have full and conscious control over your extremities and maybe that’s the reason you fall down so much? I mean, you KNOW what your foot’s gonna do and you can’t control it? Like just the other day when you stepped off Jim’s boat onto the snowy dock and your feet went out from under you and you landed flat on your back?

And then while you‘re lying there doing a virtual scan for concussions and broken appendages you think, well, at least I tucked in my chin and didn’t hit the back of my head THIS time, but you still hurt right at the base of your skull all the way home—all 140 miles of it--because you’d sorta given yourself a bit of a whiplash and you knew it before you even got yourself up from the icy deck. You know how that is?

Well, I had my reflexes tested again today while I was hauling the mail over to Hope and came around a corner on that narrow little road. Right there where it’s guardrail on one side and mountain on the other, which now that I think of it describes most of that nineteen mile long road.

Anyway, all I could see through my windshield was this: 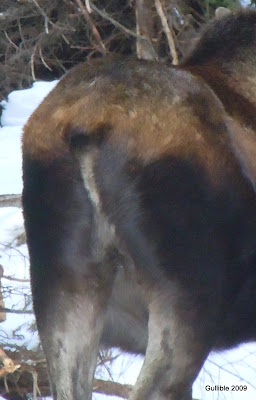 Well, actually that’s a bit of a lie, because I’d caught a glimpse of this young cow moose just before she jumped out of the forest in front of my truck so my foot was already slamming on the brakes and my right arm was flying out at a right angle to keep the U.S. mail paraphernalia and my camera from flying off the passenger’s seat and winding up embedded in the dashboard.

So, by the time I came to a stop, turned on the camera, and shot this photo all was safe. Thank goodness the road was clear of ice and snow, or I’d be picking moose hairs out of my teeth. Assuming I had any teeth left, that is. 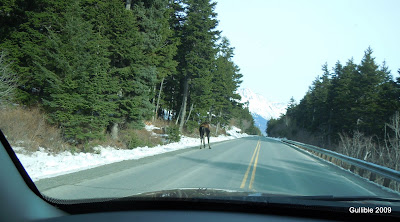 Anyway, I edged slowly closer and she turned off the asphalt and headed into the trees, then turned around and looked at me. 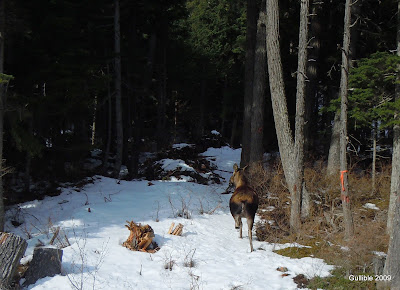 Pretty thing, she is. Maybe two-three years old. Glistening brown coat. Good thing there’s not much traffic on the Hope road this time of year or she’d be road pizza or in someone’s lap already because I heard later she’s been hanging around that very spot on the road for a couple weeks.

And, let me tell you, you don’t want a half-ton of moose with sharp, flailing hooves in your lap, which is what happens when you’re driving a small sedan or a mini-van with those low, sloped hoods. Moose-scoopers, we call them. Now you know why my deluxe mini-van stays parked in the garage all winter and instead I drive my pickup truck which gets ten miles less per gallon. 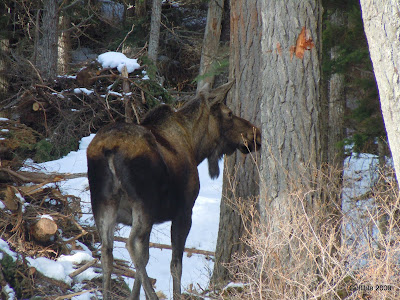 This isn’t the first time my reflexes have been moose-tested, not by far. They have a habit of jumping guardrails and running right in front of you. But, the only time my vehicle ever was in contact with one, it was the moose’s fault.

I was driving through during a bad snowstorm, the first of the season, and pulling a trailer with a heavy generator on it, when a young bull moose jumped out of the ditch right into my path. I started slowly pressing the brake pedal to slow the trailer without jack-knifing, and the moose and I traveled down the highway about fifty yards with him right alongside my left fender.

Then he ran into me. I was almost at a complete stop by that time, so he only got bumped. Then he ran off the road on the far side and disappeared. I stopped and checked to make sure he wasn’t hurt, but he was long gone.

But back to my reflexes. All that quick action and adrenalin-drenching aggravated the soreness from falling on the icy dock a couple days ago, and I still had a hundred miles of mail route to drive on bumpy roads. So I'm spending the rest of the evening on the couch with a heating pad and a good detective novel. Gotta keep those muscles loose and reflexes keen. Never know when I'll need 'em again.