A Mouthful of Bad Words

I had a mouthful of bad words a couple mornings ago. I couldn't find my newspaper at the end of my driveway, and I really hate when the day starts out that way. It bodes ill for the rest of it.

See the blue thing below with the long handle? It's a snow rake. It's intended purpose is pulling snow off roofs. I use it to snag my newspaper and pull it out of the ditch, which is where it usually lands. 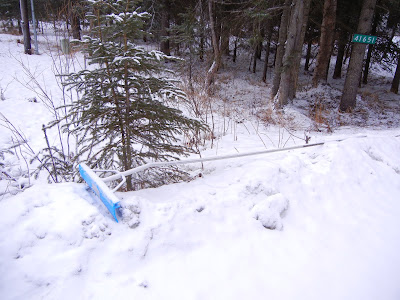 This is the ditch, behind the little spruce tree, and is deeper than it looks. There's also a steep drop-off immediately behind the newspaper tube. Right now there's two or three feet of snow in the ditch covering a mishmash of trees the highway guys cut down a few years ago when clearing the right of way.

I couldn't see the paper anywhere out there, and sometimes it's as far as twenty feet out in the white wilderness. I hate wading in snow to fetch it, so I came up with the brilliant idea of using the snow rake. 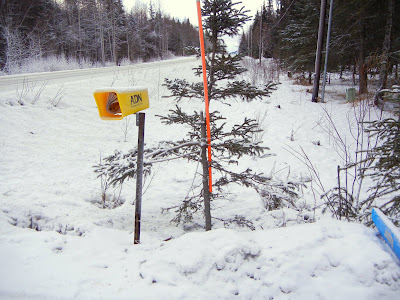 After searching both sides of the driveway for the elusive paper, I was opening my mouth to let those bad words escape into the crisp morning air when I finally spotted it. It was in the newspaper delivery tube. 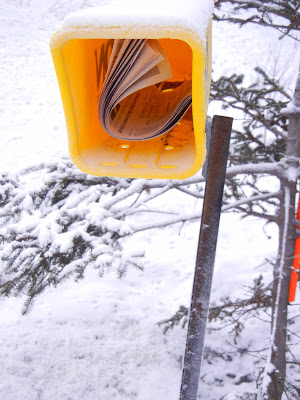 What is this world coming to when newspaper delivery guys try to confound me by putting the newspaper in the newspaper tube? They've been there three days in a row now. I suppose I'll have to put the snow rake back in the woodshed in order for things to get back to normal.