The downpour of rain we had recently took away more than half our ground cover of snow. That ground cover does amazing things, like insulate our buried water and sewer pipes, keeping both from freezing. The snow provides warmth and safety for the many grouse and ptarmigan in this area. They nestle into it where, I've read, they can find a comfortable 20 degree environment. I don't know if I believe that, but I'm sure not going to go nestle in a snowbank with a thermometer. I'll just believe it's got to be warmer than being fully exposed to the night air.

The snow also banks up against the foundation of our houses and provides insulation. Ditto with the roof.

When it rains, the highway guys spread copious amounts of sand fortified with calcium chloride (or whatever they're using these days) on the asphalt. I walked out to the end of the driveway get my newspaper one rainy day and saw a spruce grouse happily pecking at the grains of sand.

And the snow (need I remind?) provides what we need to enjoy winter--skiing and snowmobiling.

The rain, however, can be dismal and disappointing. Sure, we don't have to shovel it, but it also saturates the snow on the roof, increasing the weight until we just might have to shovel the roof to keep it from collapsing.

It turns our driveways and city sidewalks into ice rinks, and we have to strap ice cleats to our boots to avoid concussions and broken extremities.

On the other hand, it floods the nearby lakes. And when the cold returns, transforms those lakes into gigantic ice rinks.


On my drive to Seward Tuesday I saw that Kenai Lake was frozen. That isn't something that happens very often. The lake is huge and subject to many currents and winds that keep the surface too disturbed to freeze, but it's happened.

I stopped to take a photo and noticed something on the shoreline. 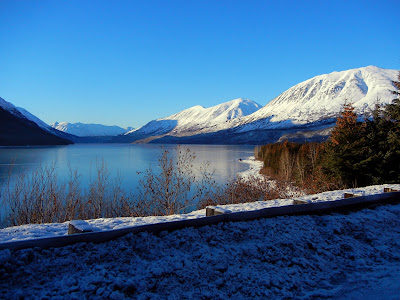 This is but a wee part of Kenai Lake. There's a large portion to the left in this picture, and a much, much greater expanse that wraps behind the mountains on the right all the way to Cooper Landing, which by highway miles is more than twenty miles away. At the mouth of Kenai Lake in Cooper Landing is where I take the swan pictures in winter. 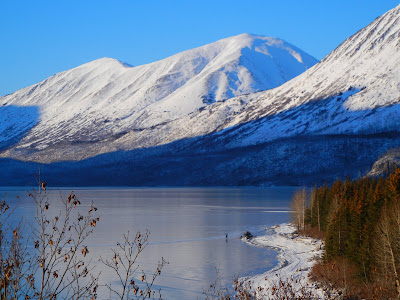 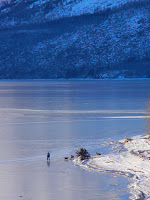 Thursday, I went to post office in Moose Pass. I looked down over the road shoulder as I drove along Trail Lake, and sure enough, the skaters were out. 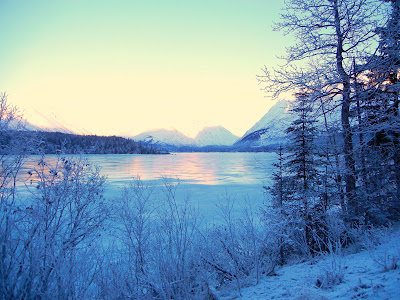 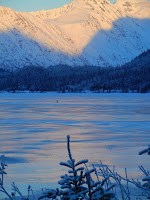 Trail Lake is a large "Y"-shaped lake. It isn't anywhere near as large as Kenai Lake, but it isn't a little pond, either as you can see by the tiny skater.


Down around the corner, I spotted something else. 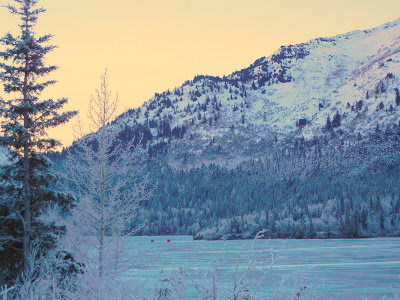 Ice fishermen, vehicles and all, parked on the lake. 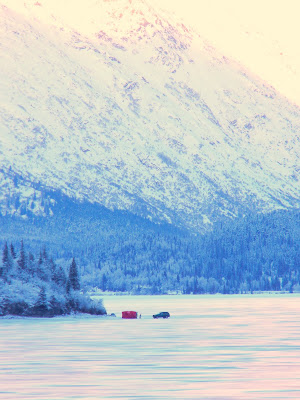 Moose Pass has become something of an ice-skating community. The guys play hockey, and the women and little kids have a great time. All dogs welcome, as long as they mind their manners.
Posted by Gullible at 8:21 PM