Walking in the Woods with Bill

I went for a walk in the woods today. My hiking companion Bill and I are hiking the Appalachian Trail. Today. And maybe tomorrow, too. Boy, this is something I’ve always wanted to do.

We’ve already been to the sporting goods store and gotten outfitted with a mountain of gear. Well, Bill got outfitted with gear. I already had what I need.

He has a $250 backpack, a sleeping bag, a tent, and a bunch of other stuff. He balked at paying $12 for a little orange trowel with which to bury his….uh, deposits. Me, I think I’ll just use the indoor facilities.

He’s also burdened with carrying all the weight up hill and down. I’m just going along for the stroll, to “be” in the moment.

While he sets up and strikes camp, I’ll just stretch out in my living room nest in front of the wood stove. 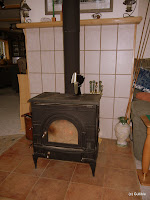 He’ll wake up to this: “The inside of my tent was coated with a curious, flaky rime, which I realized after a moment was all my nighttime snores, condensed and frozen and pasted to the fabric, as if into a scrapbook of respiratory memories.” Now that is some cool descriptive writing, and the pun is accidental but intended on second thought.

His water bottle froze. I got cold, fresh well water from the tap. He had to figure out his little stove to boil a cup of water. I filled my tea cup from that instant hot water thingy at my kitchen sink and enjoyed a mug of hot cocoa chai.

Considering the tempest Mother Nature is throwing at my house today (like a wrecking ball slamming into the east wall), I’m a fool to venture out at all. Another day of this and we won’t have any snow left at all. Unlike Bill. He’s up to his knees in snow. In Georgia. In March. 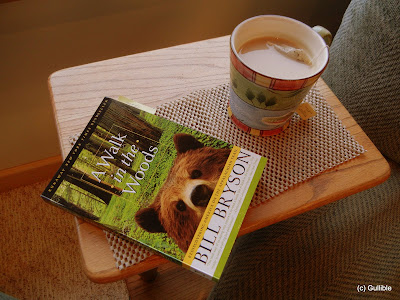 He got so sick of snow and rain, he skipped a part of the trail and sneaked around the snow to Virginia. Thing is, he was getting the heebee-jeebies big time when we were in Gatlinberg. You know--albino banjo picker, four city dudes on a river float trip, remote woods in Tennessee. Ring a bell?

When I could no longer sit still in the middle of the afternoon, I left him there and reorganized my pantry and storage shelves in the garage. 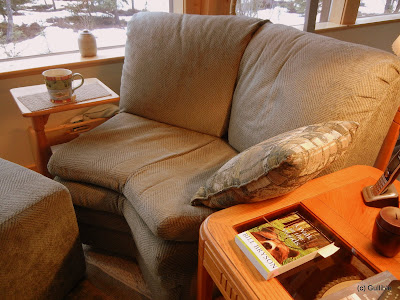 Done with that, and it’s time to rejoin Mr. Bryson in Virginia. I imagine by the time I turn out the light and fall asleep, we’ll be all the way into…. I don’t know, maybe Pennsylvania? This weather (40 degrees and raining and blowing) is supposed to last another day or two. Might as well keep Bill company.

He's a pretty good companion for a hike. Join him sometime. He carries all the gear. But a word to the wise: Bring your own coffee filters. He uses toilet paper instead.

Email ThisBlogThis!Share to TwitterShare to FacebookShare to Pinterest
Labels: A Walk in the Woods by Bill Bryson