﻿Just downstream from where I sit, a massive slab of slate rises almost five hundred feet above the Rhine River.  From that wall, the Loreley sing their seductive songs, luring sailors to their deaths.  I am safe behind the walls of this medieval town, tummy filled with saubrauten, potato dumpling and a lovely, tender green salad, its light touch rarely seens in the U.S. 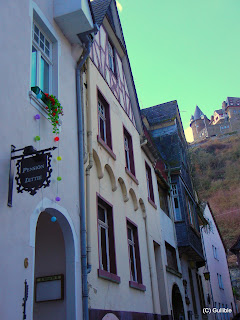 The only siren song enticing me this Saturday night is the one from the goose down pillow on the bed in my wee roon at Pension Lettie in the town of Bacharach.  That same  pillow had serenaded me earlier this day into a sleep so profound, my friends were unable to awaken me when they left for dinner.
I wandered through the narrow, cobblestone streets searching for them in the few hotel restaurants that are open this time of year, finding them and the sauerbraten in the third one.
The drive from Frankfurt to Bacharach follows the legendary Rhine through wine country.  The hills and cultivated slopes of the Rhine Valley are punctuated with castles and castle ruins, reminding me yet again how very young my own country is in terms of history.  Fog and rain gave way to blue skies and sun as we drove the  Autobahn, then turned onto a two lane road that followed the course of the river. 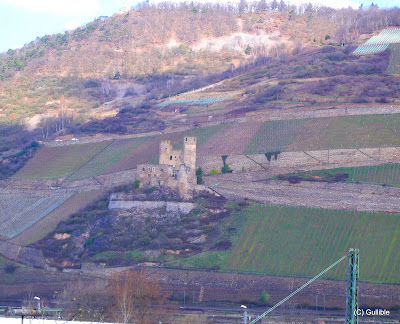 This day began in Chicago O'Hare airport, boarding a United 747 headed to Frankfurt, Germany.  I was in the very last row, the one with only two seats across rather than three, because the airplane's fuselage tapers to the tail, thus narrowing the interior cabin width.
Seated next to me was Oa﻿dan, a slight man perhaps in his late thirties, who teaches chemistry in secondary schools.  He lives in Oklahoma City, and was flying to his homeland of Turkey.  Very discreetly, after dinner, he began to pray, bowing forward as far as the restricted seating would allow, then read for some time from his Quram, bound in a beautiful green embossed material.
Oadan belongs to a group that promotes friendship between Americans and Muslims.  Ironically, when two of my group of friends had flown to Germany the week prior, they also had been seated with a Turk who lived in Oklahoma City, who taught secondary school.
Oadan believes what is happening in the Middle East right now is good for not only the people in the Middle East, but in the whole world.  And education, he insists, is what will better world relations.
﻿
﻿

In the meantime, the narrow streets of Bacharach are here for me to explore.  This is the off season, the streets all but empty.  The bakery is open, singing its own siren song of desire.  The quaint restaurant down the lane enticed me earlier in the day with hot German potato salad and a frankfurter.  Not the corn syrup sweetened hot dogs sold at home, but delicately seasoned tubes of sausage in a casing that resists for a moment and then surrenders with a satifying pop and a burst of flavor.  The closest product I have seen in Alaska are the Casper's hot dogs Costco sometimes carries in the summer.
I had eaten one for breakfast, because one must have a frankfurter in Frankfurt, no? 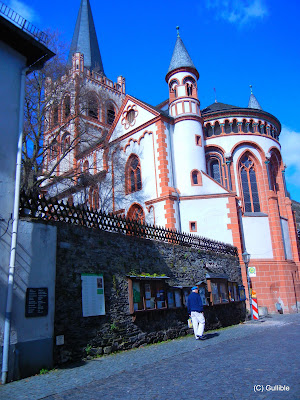 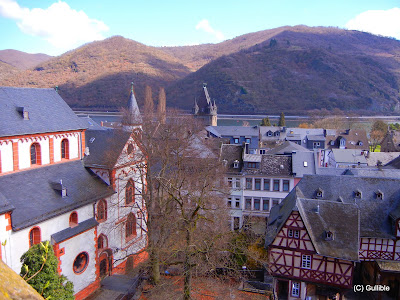