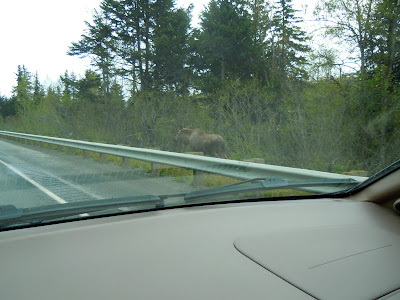 Hey, kid!  Race you to the end of the guardrail?


What're you doing hangin' out next to this busy highway?  I warned you about that the last time I saw you.  And aren't you supposed to be bedded down this time of day?

Teenagers!  Guess you can never fill them up. 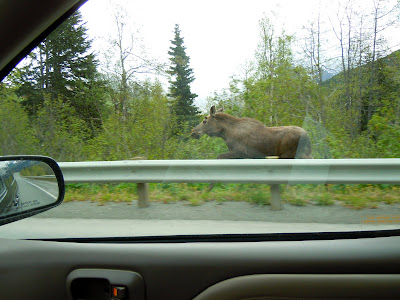 Beat you by a bumper, but I had a running start.  Next time, kid.  Stay off the road, huh?

By the way, cute little antler nubbins you're growing there.


***
There's something special about the late evening light when the clouds part after a cloudy, rainy day. 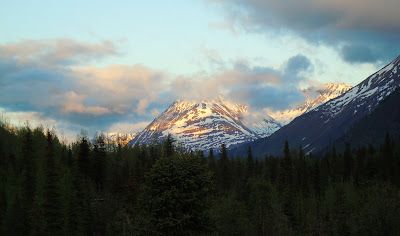 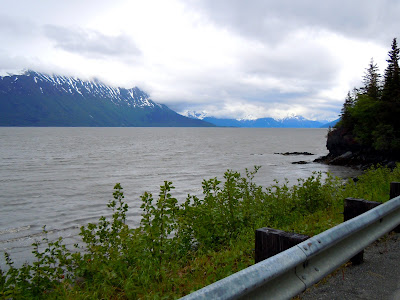 Ah, Turnagain Arm on a windy day, just after high tide.   Just a piece of it, though.  After all, it's more than fifty miles long and several miles wide.
A few years before Capt. William Bligh had his contretemps with Christian Fletcher, Bligh was sailing master on Capt. James Cook's HM Sloop Resolution.  In 1778, sailing up a gray and silty body of water that forked near its terminus in Southcentral Alaska, Cook thought he'd reached the end of that quest in the search for a Northwest Passage.
He ordered Bligh and a party of sailors to explore both  forks  to see if either led to the sought-after passage.
Bligh reported that the northern arm, Knik, ended in a river, and after a sail up the southern arm, disdainfully said of that arm "turn again,"  no Northwest Passage here.  The name stuck.
Cook then sailed off to the Hawaiian Islands where he encountered his own fatal contretemps with the natives, who thought him a god.  Such a let down.
Such history in these parts.
Posted by Gullible at 5:08 PM