He who limps is still walking.
--Stanislaw J. Lec
Days Three and Four
The Journey Ends 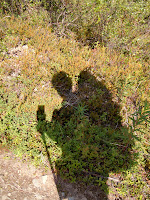 This is the face of a happy dog (below).  This is CooBear, and CooBear is doing something I wanted to do so I could have a happy look on my face, too.
More about CooBear and his happy face later.  First, we need to return to my camping site five miles from the end of Devil’s Creek trail. 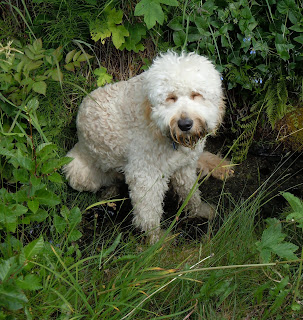 I’d pitched my tent on a knoll overlooking the valley.  I doubt it’s an official campsite, more a scenic overlook.  Regardless, I wasn’t moving an inch farther.  I’d promised my feet an easy day—just two miles—and instead had walked eight miles, the longest distance yet.  I’d almost gotten myself into dehydration and overheating trouble, but had been given refuge from the sun and a bottle of cold water by the occupants of the Devil’s Pass cabin.  Then I’d walked another five miles. 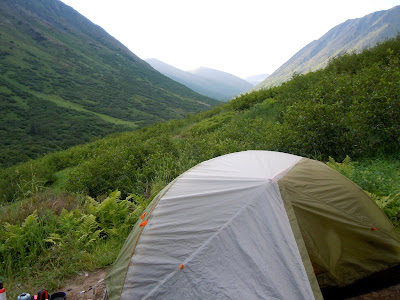 I got water out of the creek and put some on the Pocket Rocket to boil so I could reconstitute the Mountain House chicken and rice.  A little tickle in my stomach indicated an appetite for the first time in this journey.  While dinner rehydrated, I set up my tent and even took a sponge bath.

I ate about half the dinner and saved the rest for breakfast.  No way was I going to carry it out with me.   I hadn’t seen a bear box around, so my food supply was inside the tent with me.  Too bad for any bears that dared disturb me tonight.
There was a chill in the air tonight, but I was still warm from the long hike in the hot sun.  I’d worn only but short sleeved tee shirts so far, except for the first night when I’d donned a long-sleeved SPF shirt to keep the mosquitoes and moose flies from chewing up my arms.  Tonight’s chill, though, was perfect for sleeping.
When I awoke in the morning and finally rolled out of my sleeping bag, the sun had warmed the valley.  I boiled water for tea and to heat up the left-over chicken and rice.  I struck camp and was packing when Dan and his daughter Peterhaus wandered in.
“Wow!,” said Dan.  “You sure walked a lot farther than I thought you would yesterday.”  They had started out early as they had a time specific to meet their ride at the trailhead, so they ate lunch while I finished packing.  I thanked them again for the gift of water at the Devil’s Pass cabin.
“You might have saved my life,” I said.  We exchanged do-you-knows for a while, finding friends in common in the various places we’d lived.  Then Dan helped me lift my pack and we set out for the trailhead.  I told then to go ahead as they walked faster than me.
Bicyclers met me on the trail occasionally.  This was Saturday and the weather was terrific.  Perfect for mountain biking.
I stopped and taped up my feet.  They were moving just far enough forward on this decline to rub  where the toes bent, and a new kind of pain became my companion.

On and on and on through dense vegetation I walked.  And then I met CooBear.  He was sitting in a couple inches of water on the side of the trail, a blissful expression on his face.  I envied that dog.  If there had been room, I would have joined him.
His humans were hiking up the trail and had stopped to filter water into a bottle.  I put “one MSR water filter” on my mental shopping list.
CooBear has a rather complicated name, but his humans just call him CooBear.  He’s Golden Retriever and standard poodle, a hybrid called goldendoodle.
I turned to continue my hike.  The trail rose slightly here.  I was wearing a visor and was watching the trail to avoid tripping on rocks.  I’d taken only a few steps when suddenly I was face-to-handlebars with a bicycle and a front tire  jerked and brushed past my left leg.    I jerked to my right.  I didn’t even have time to think about my reaction, and I can’t believe the bike never touched me.  That’s how close we were.
The biker didn’t stop, didn’t say anything, hadn’t given a warning.  I like to think he’d been concentrating on missing the rocks, too, and hadn’t seen me.  He had to have seen me, I realized later.  After all, there were three of us on the trail in front of him, plus the dog.  This was the only instance of what might be inconsiderate trail etiquette that I encountered on the whole trip.
Bikers coming up behind me gave notice.  Bikers coming at me let me know how many were in their group when I stepped aside to let them pass.
That one instance of something that could have caused me injury on a rugged hillside made me take action.  I shoved the visor up higher on my forehead so I’d have a better view. 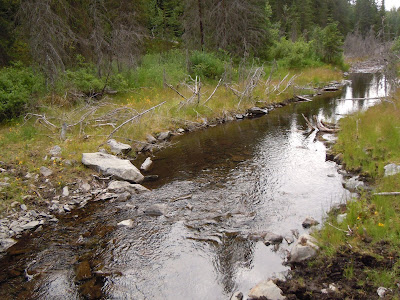 My feet were hurting seriously now.  I watched as the vegetation began to change and tall cottonwood trees came into sight.  I crossed a small creek and knew I was slightly more than two miles from the end.
I got out my cell phone to see what time it was and noticed I had reception.  I called Erin to let her know I’d be at the trailhead in a couple hours, figuring I was walking a mile an hour.  She said she’d be home by then and would pick me up.
I was in spruce forest now. 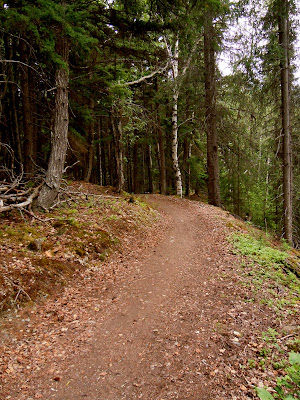 I came to a larger creek and knew it was Quartz Creek.  Soon, soon, soon.  None too soon for my feet, though.  A downhill stretch about did me in.  I actually walked down part of it sideways, to keep my feet from rubbing more.
Traffic noise was very loud.  I’d been hearing it for quite a while, a constant roar that sounded like it was just around the next bend.  But, I lived in these mountains and knew the acoustics were zany and unreliable.
I was walking slightly uphill now.  I glanced ahead and saw something white flash by.  I looked again and something blue zipped past.  I got out the cell phone and called Erin.
“Where are you,” I asked. 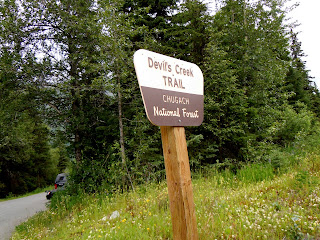 “I’m just passing the Devil’s Creek trailhead on my way home from Hope,” she replied.  “Where are you?”
“About a hundred feet from the trailhead,” I said.
“Let me run my husband home and I’ll be right back.”
“Bring me a tall glass of cold, cold water,” I said.
She did.  My late in life experiment was over.  I’d walked about 28 miles in four days, overweight, overloaded, and with bad feet.
While I waited for Erin, I started thinking about where I’d hike to next.  Just as soon as I could wear shoes again….
(Note:  Lest you think I was exaggerating the condition of my feet, I could not wear socks until the second day, even though my feet were bandaged.  By the third day, I was able to wear my Teva sandals because the strap was below the skinned areas.  It was a week before I was able to wear shoes.  I am now back in my hiking boots—three weeks later.)
Posted by Gullible at 4:24 PM